From Alaska back to the lower 48 states through Canada we chose Alaska and Cassiar Highways. From Prince Rupert we took the the ferry through the Canadian Inside Passage which was a wonderful 15 hours trip. This ferry ends in Port Hardy in Vancouver Island, where we explored its northern and central parts before we continued to the metropolis of Vancouver. 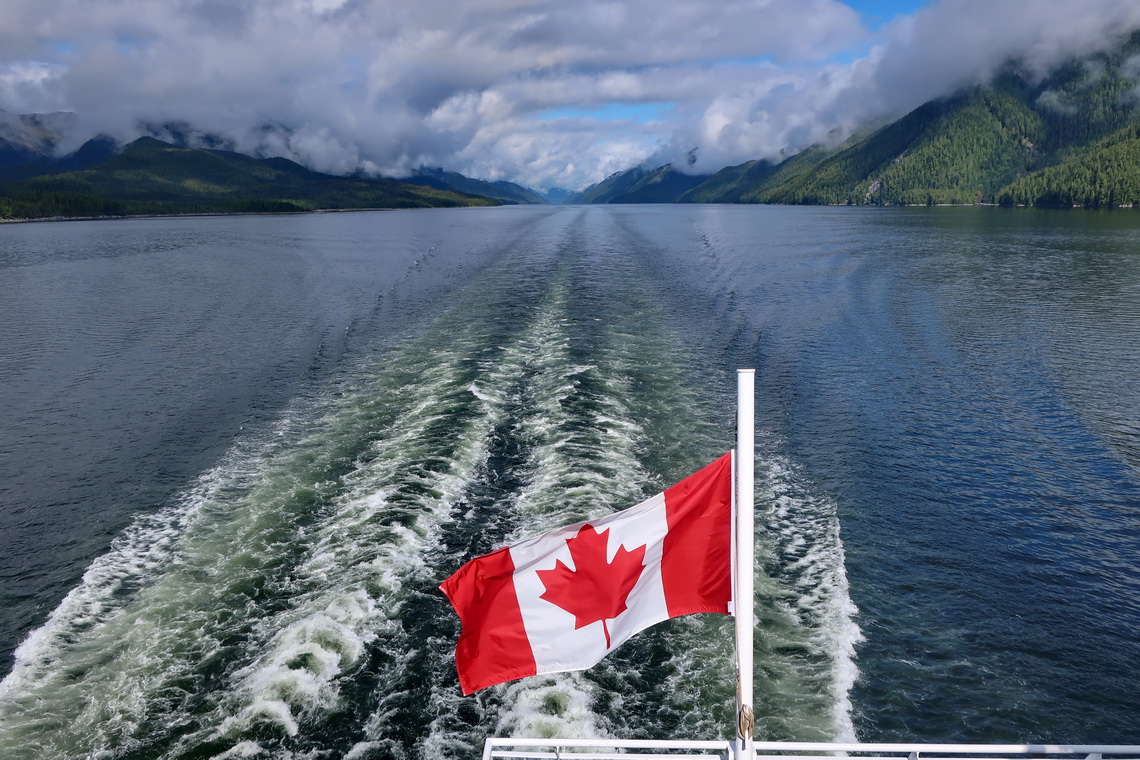 Our first destination in Canada was Kluane National Park with its mighty mountains of the St. Elias Mountain Range including Mount Logan which is with 5959 meters sea-level the highest peak of Canada. Unfortunately accessibility of Mount Logan is extremely costly and it is hidden behind other huge mountain ranges. Alfred traversed the four Sheep Mountains (up to 1961 meters sea-level) which are located directly above Alaska Highway and Kluane Lake. 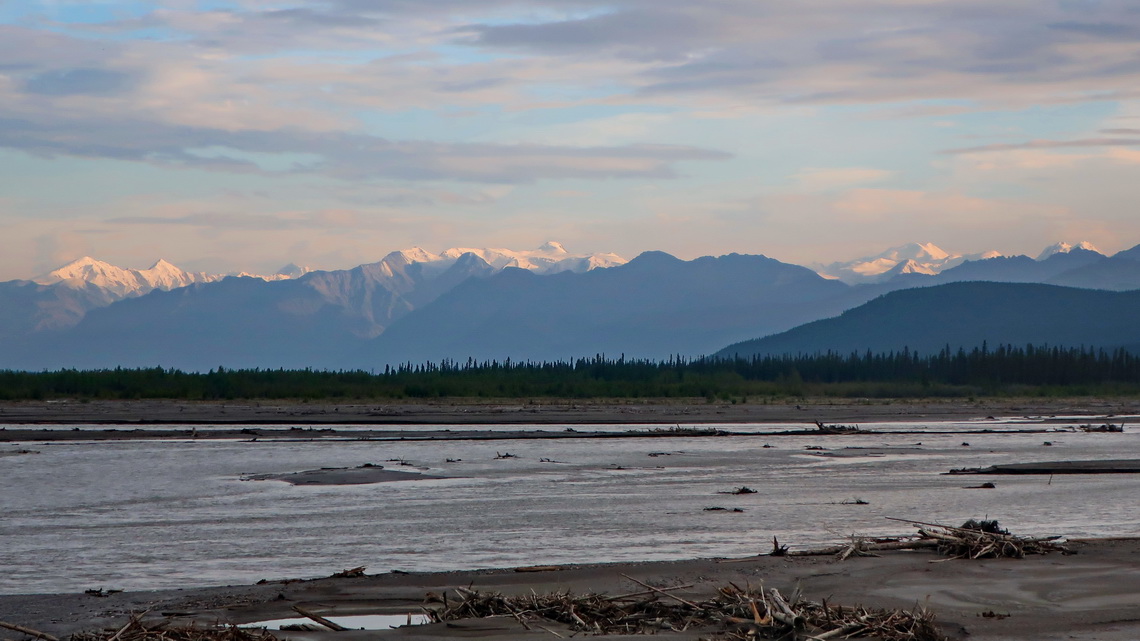 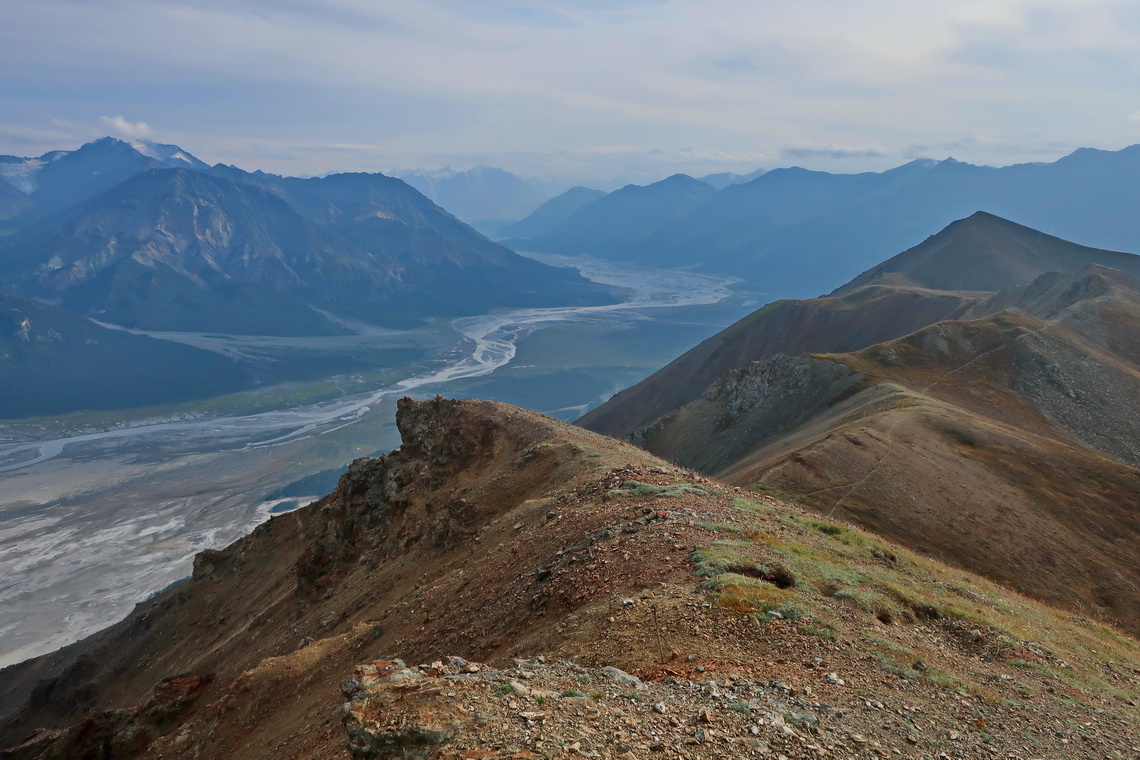 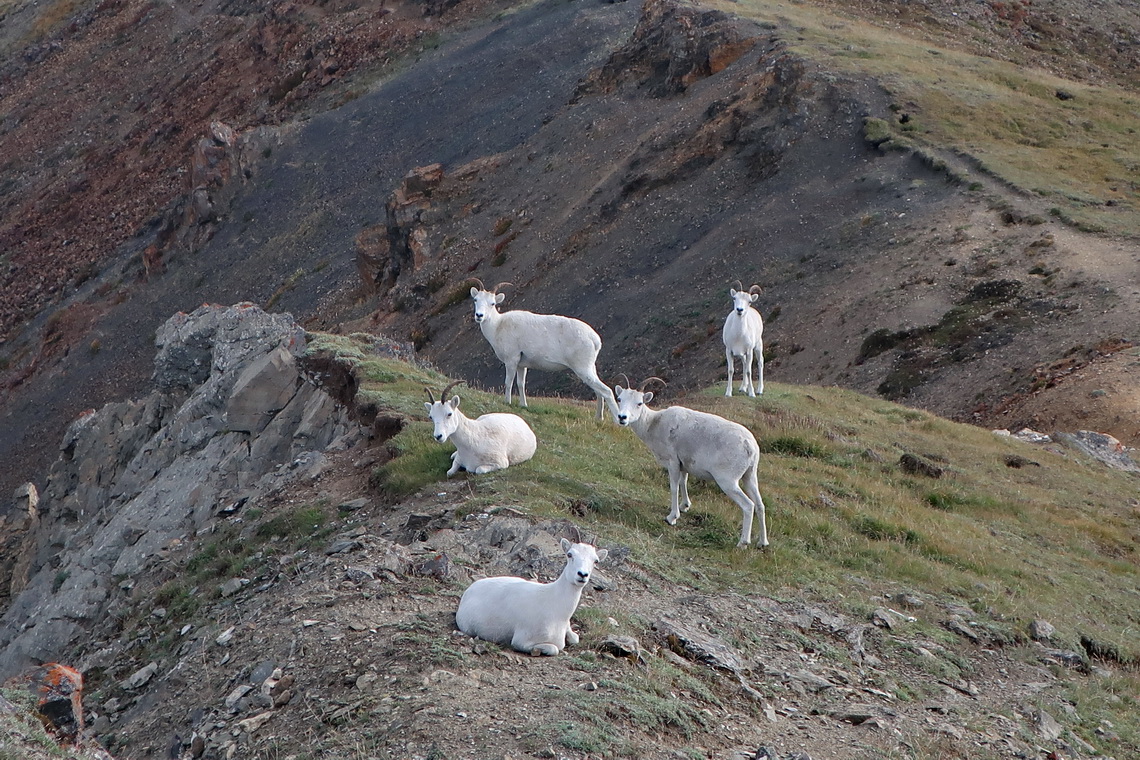 The data of this 18 kilometers long and nearly 1,500 meters vertical difference trip are included in the GPS Coordinates File of Yukon, also the short 2 hours trail Dezadesh River in Haines Junction. There we continued to again to Alaska, Haines in its southeastern part. Before we came to the border we hiked the marvelous Chuck Creek (more than 16 kilometers, also included in the GPS Coordinates File of Yukon), which starts nearly at the highest point of the Haines road, where we spent also the night. 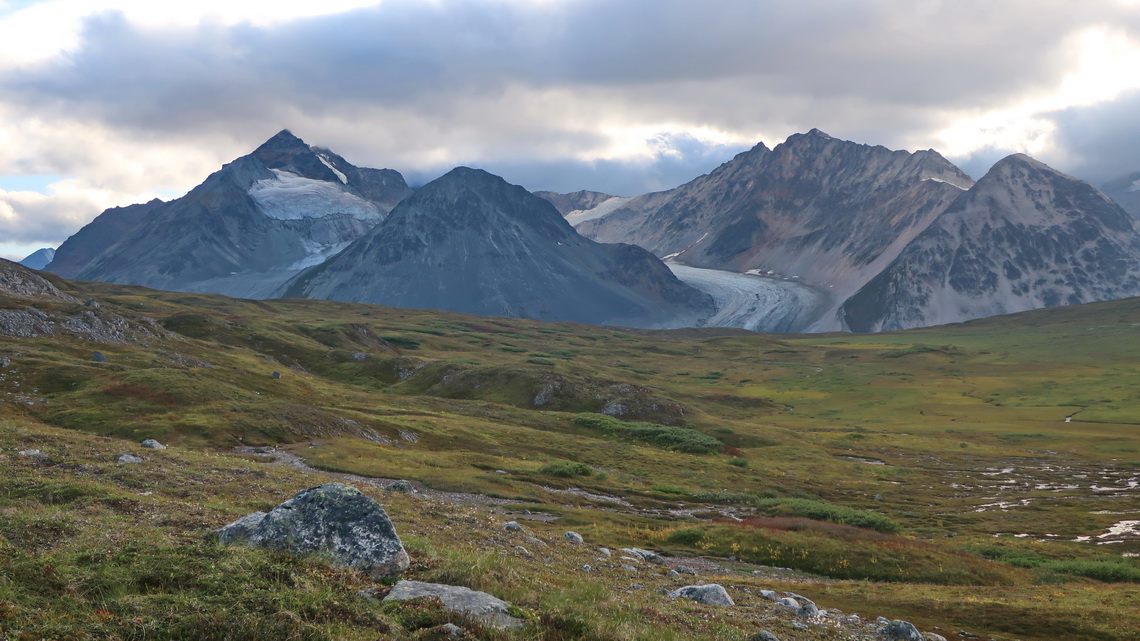 Early morning Marion wanted to leave the car but she fell back literally because a Black Bear was in front of her and was investigating the parking sign. However we continued to Haines and via a short ferry to Skagway (see next article) and came back to Canada on the Klondike Highway to Carcross and further to Yukon's capital Whitehorse where we had to go to John's Auto Repair because our 5th gear was gone. They are experts in German cars and opemed our transmission. Unfortunately the main shaft was grounded off but they ensured us that we can continue with four gears only - maximum speed 80 kilometers (50 miles) per hour. 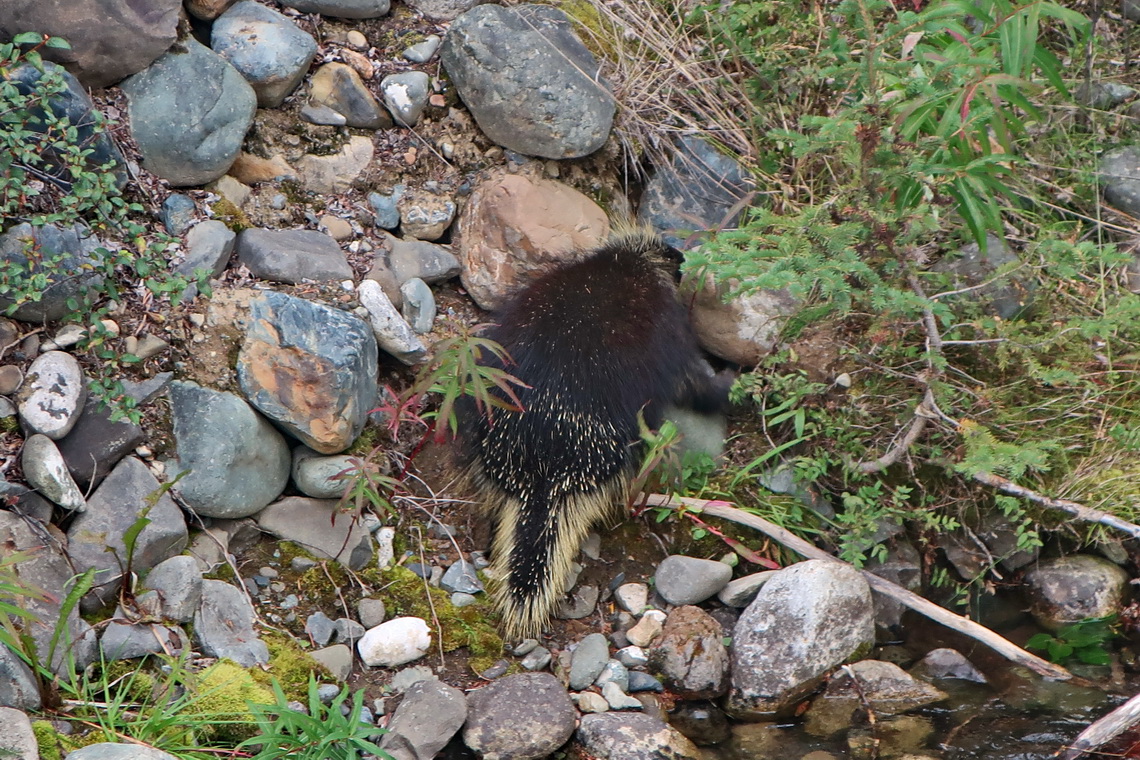 Cassiar Highway is famous for its wildlife. Indeed we saw a lot despite the lousy weather. 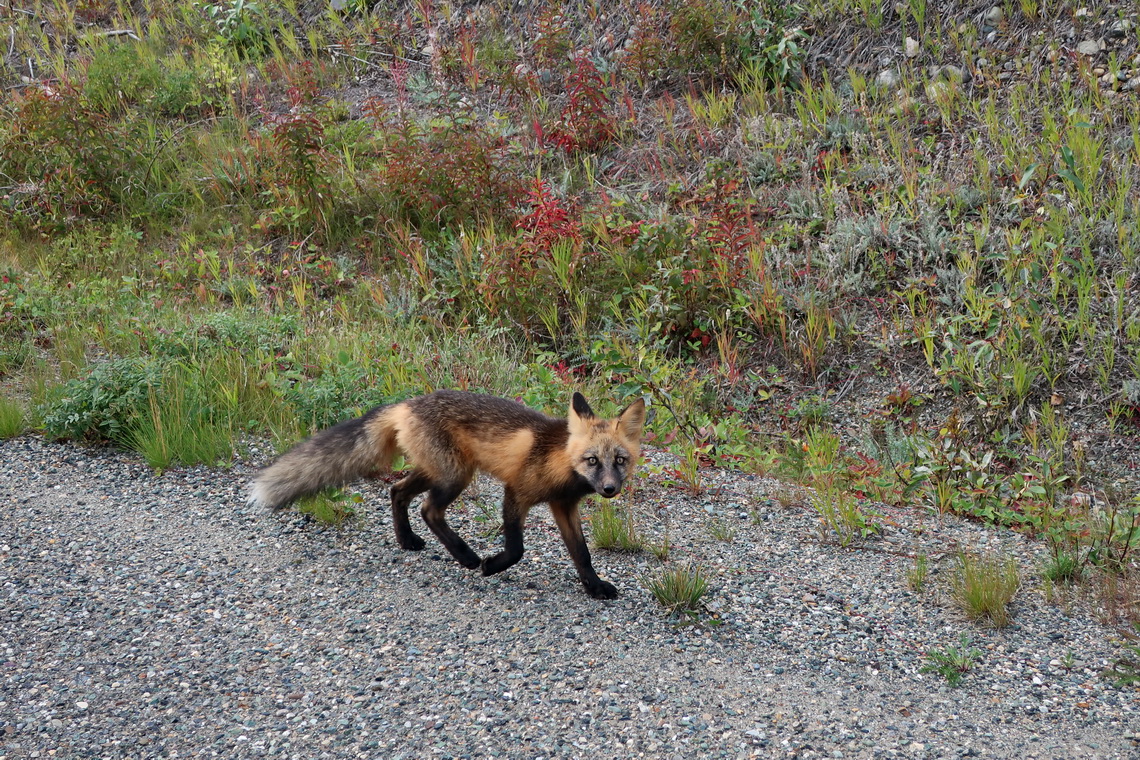 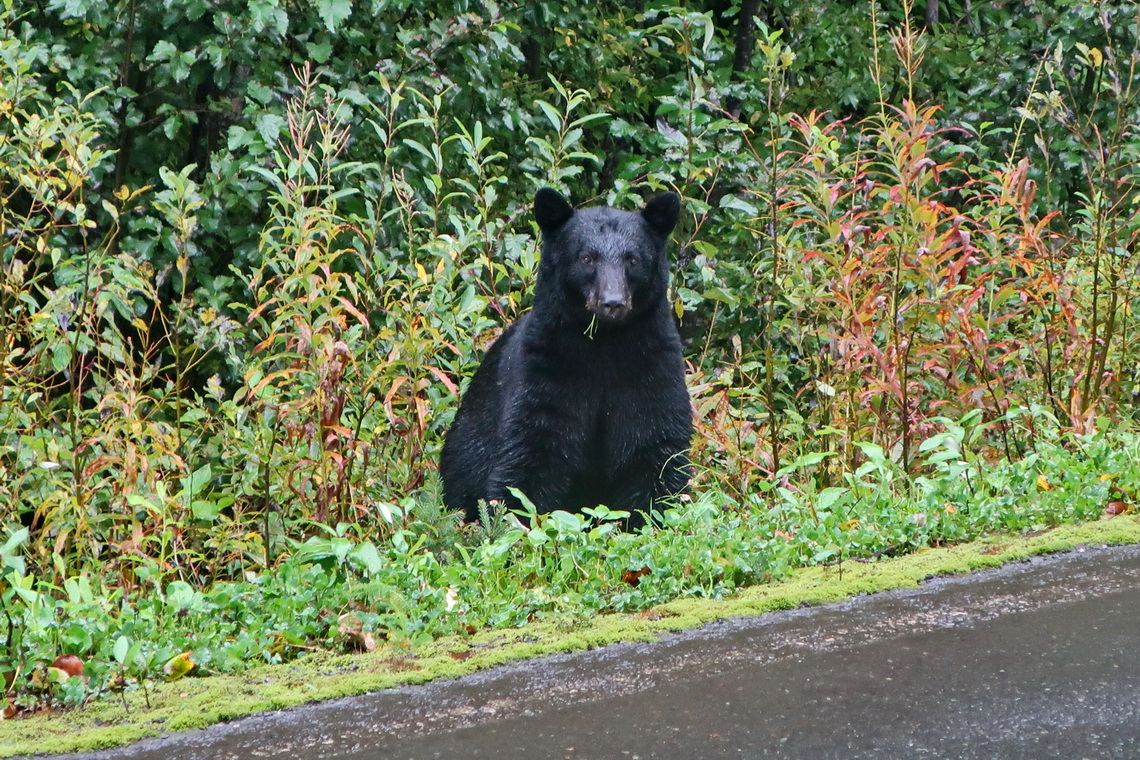 Again we came back to Alaska to see the famous Fish Creek in Hyder, where you might see Bears fishing Salmon. Hyder is only accessibly via its Canadian sister town Stewart. Consequently there is no US customs. We were not lucky with the Bears and escaped the rain, soon. 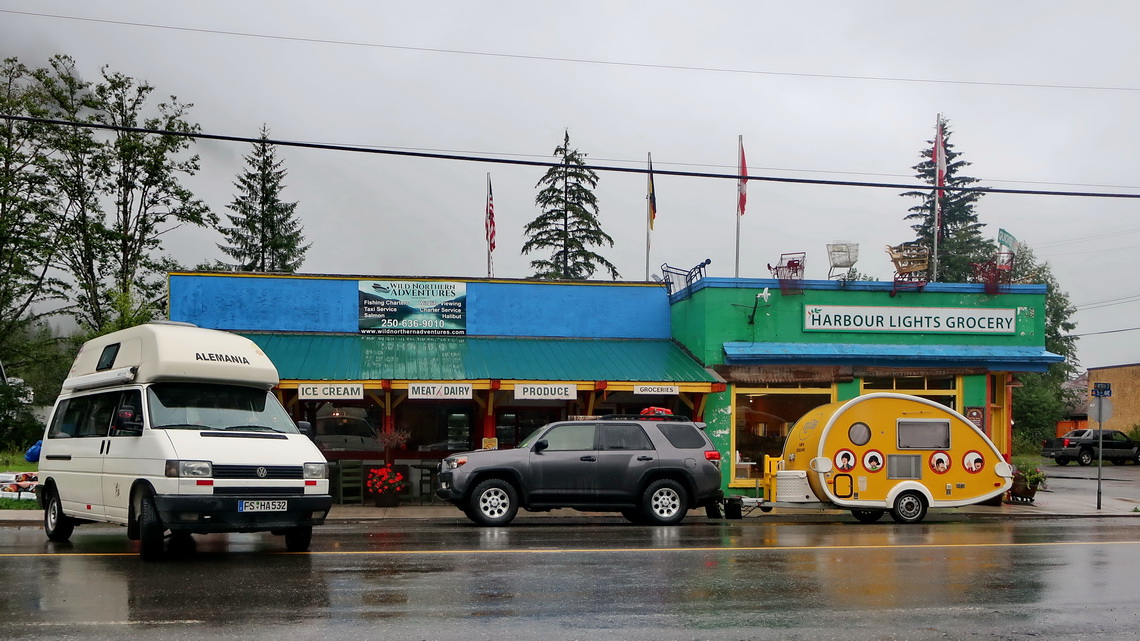 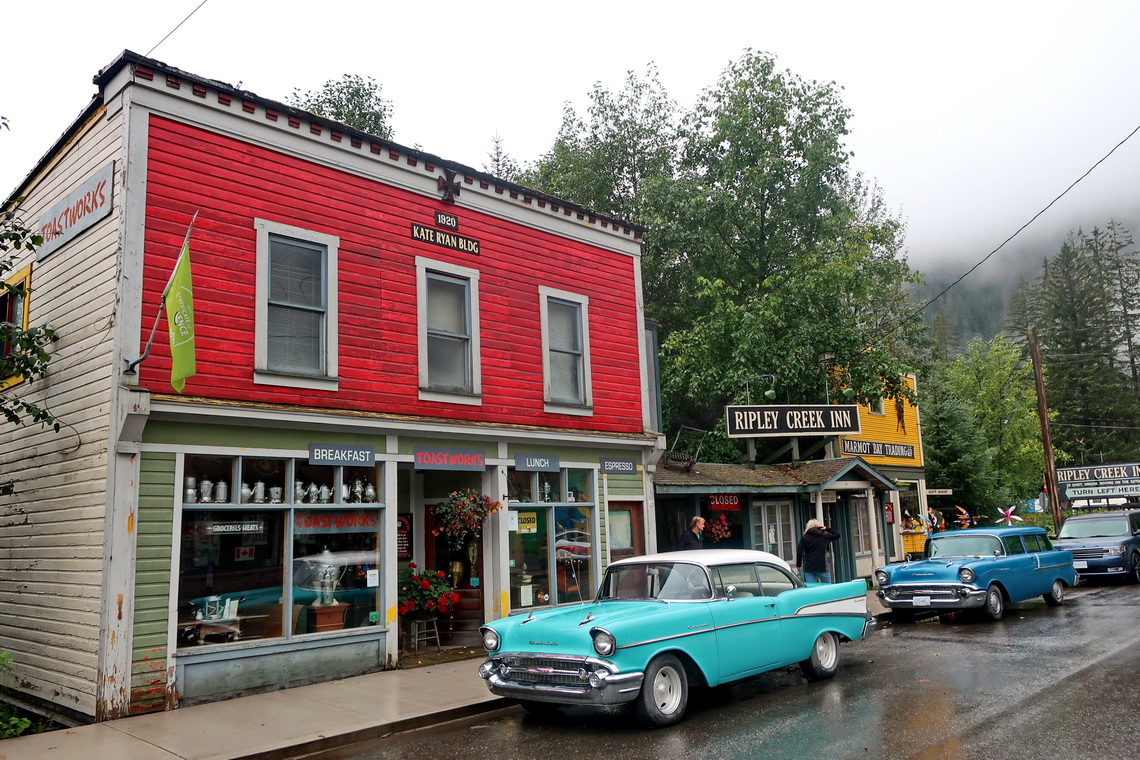 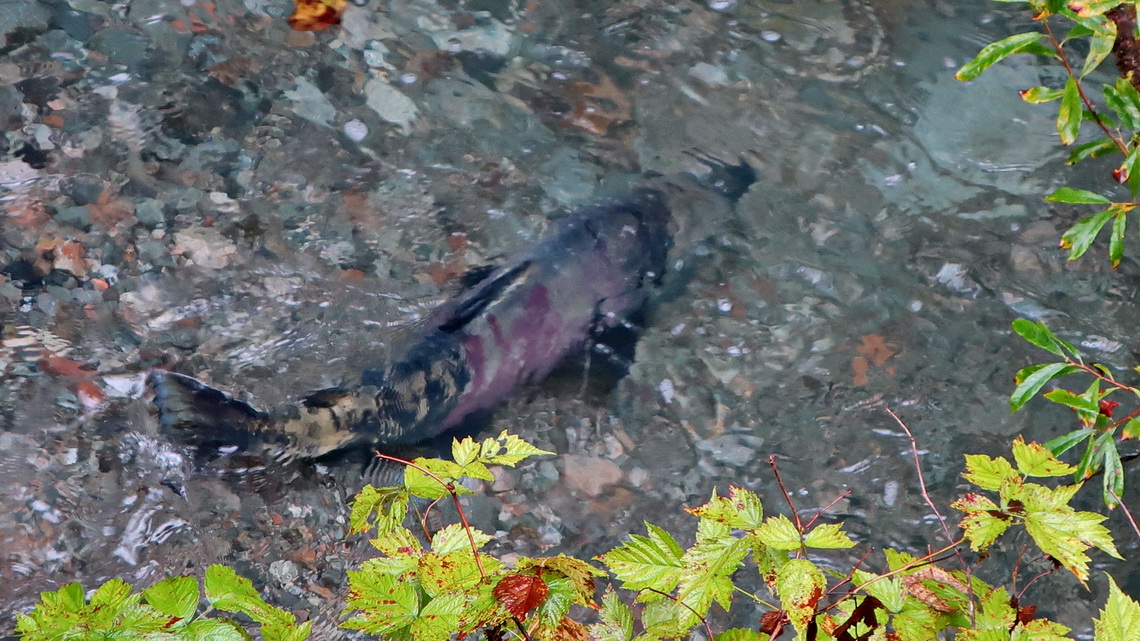 Also it was raining cats and dogs nearly the whole way to Prince Rupert and we were happy that we caught a ferry on the next morning to Port Hardy. Prince Rupert has a nice Civic Center including swimming pool and sauna, where we paid just one buck per person in the evening. 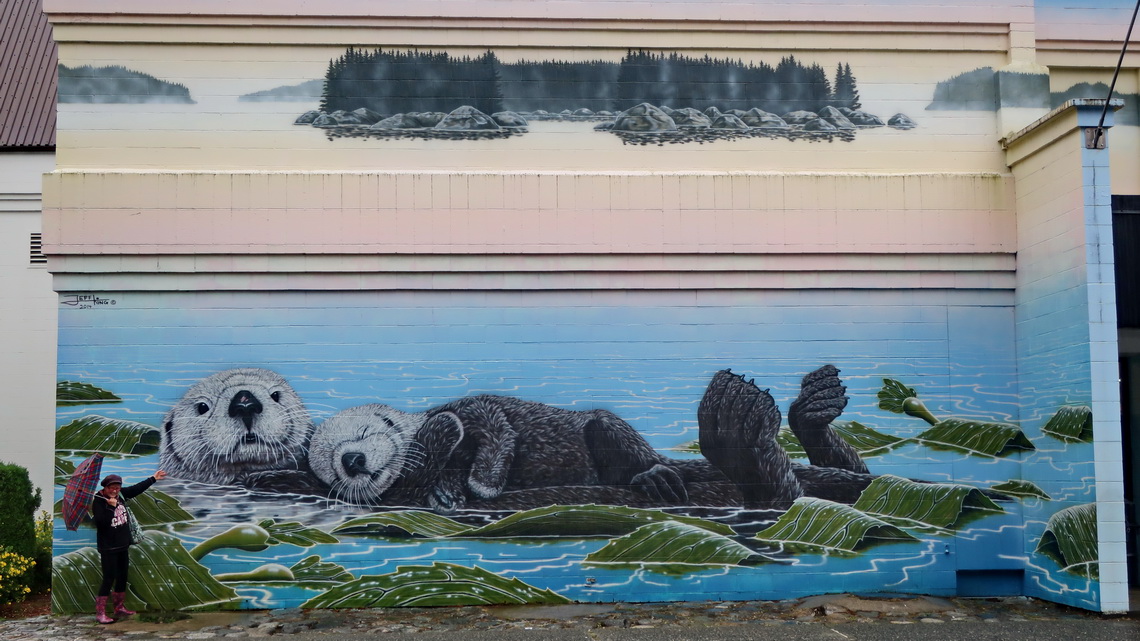 The 15 hours ferry trip was outstanding and everything but boring. The weather improved and we could enjoy the view on the tight channels of the Inside Passage. The narrowest portion in the 70 kilometers long Greenville Channel is just a little bit more than 400 meters wide. 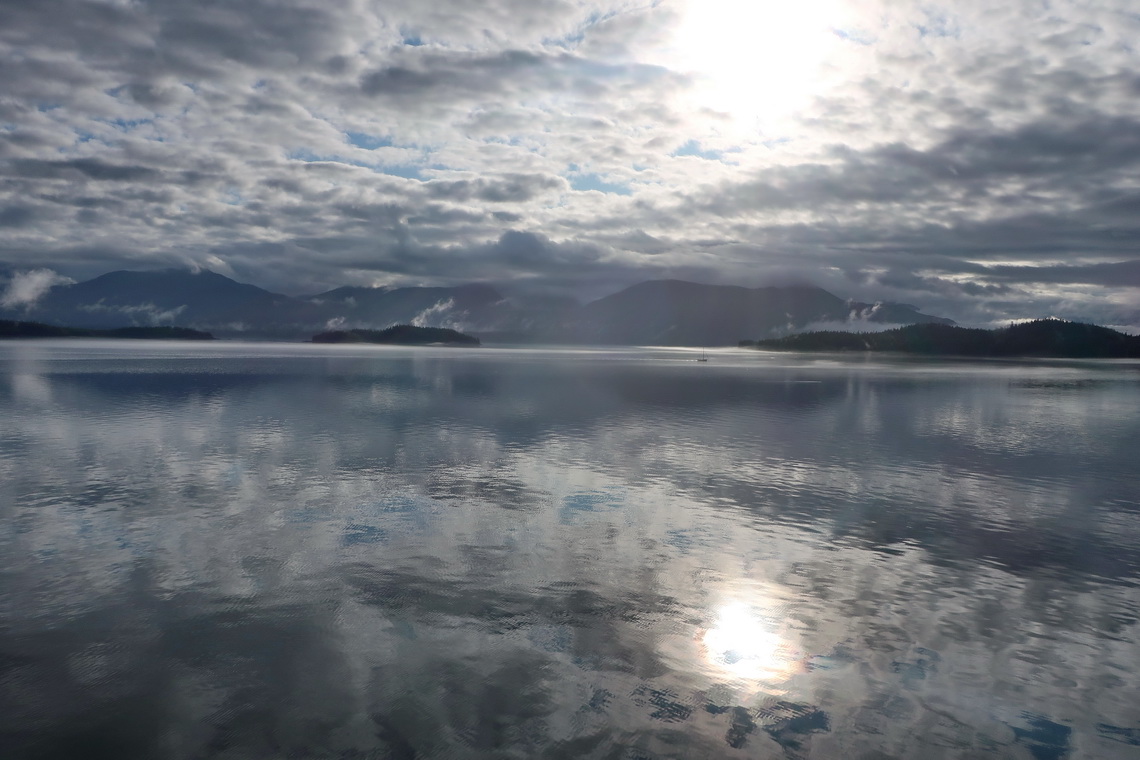 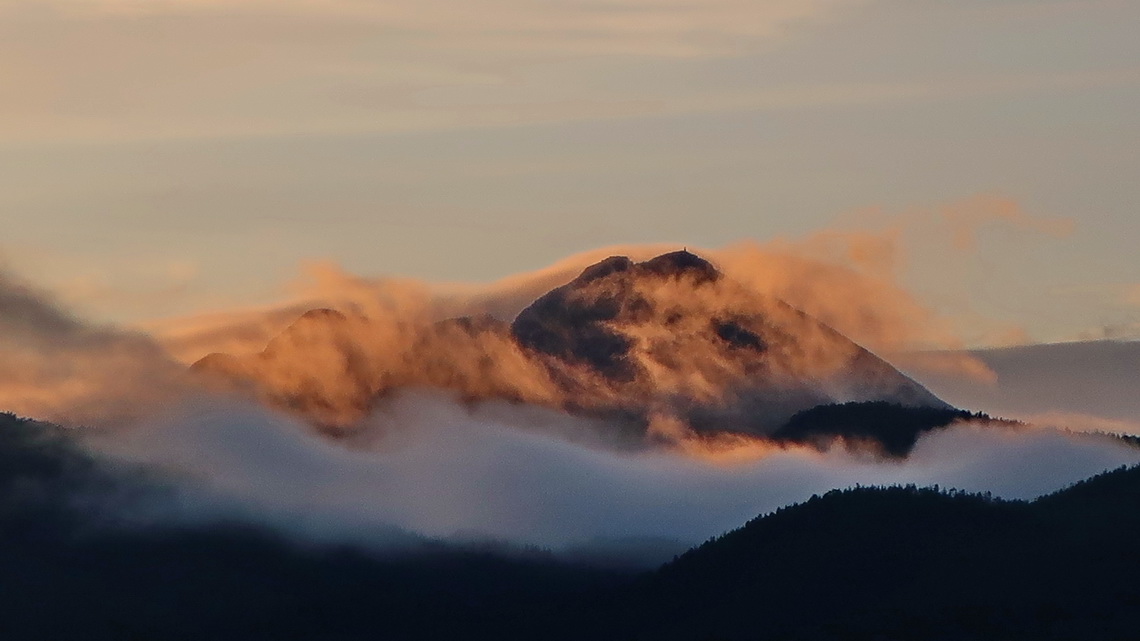 We slept on the beach of Port Hardy close to its Visitor Center, where we saw two Bald Eagles in the morning strolling on the beach. From Port Hardy we headed to Port Alice on the west coast of Vancouver Island. In between is Beaver Lake, which is an excellent opportunity for swimming. Close is a little trail through the rain forest. A longer hike is along Marble River which leads to the Emerald Ponds, also nice for a refreshing bath.

Back to the Island Highway we continued to beautiful Cluxewe Beach, Port McNeill (also with a marvelous beach) and Campbell River. Close to Cambell River is the 4 hours Ripple Rock Trail which provides an overview of the channel between Vancouver Island and the eastern islands. 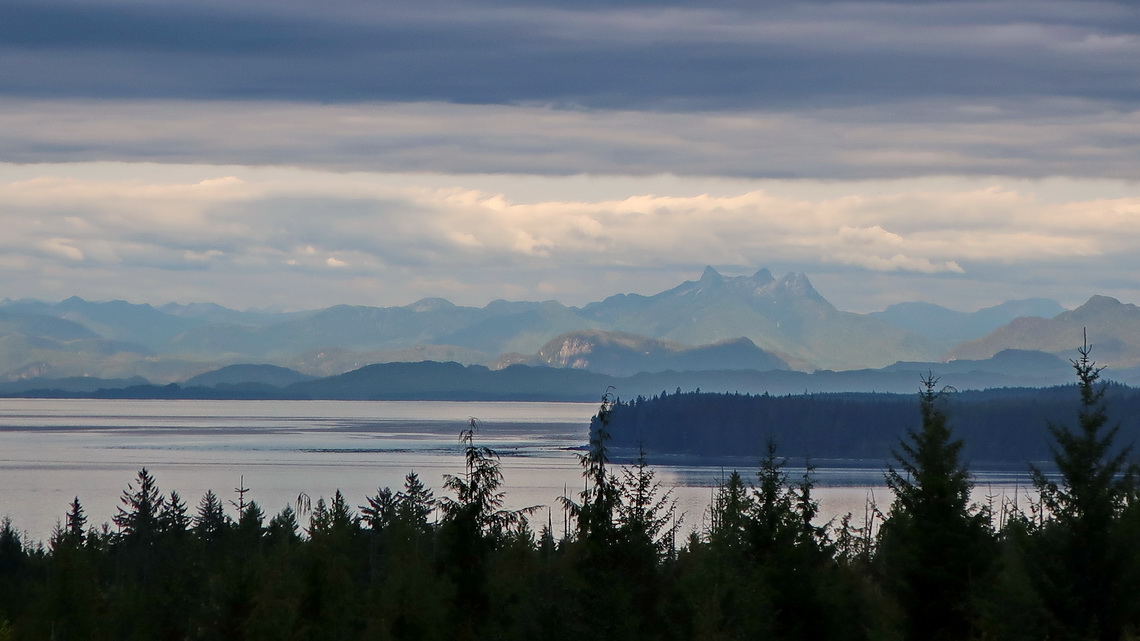 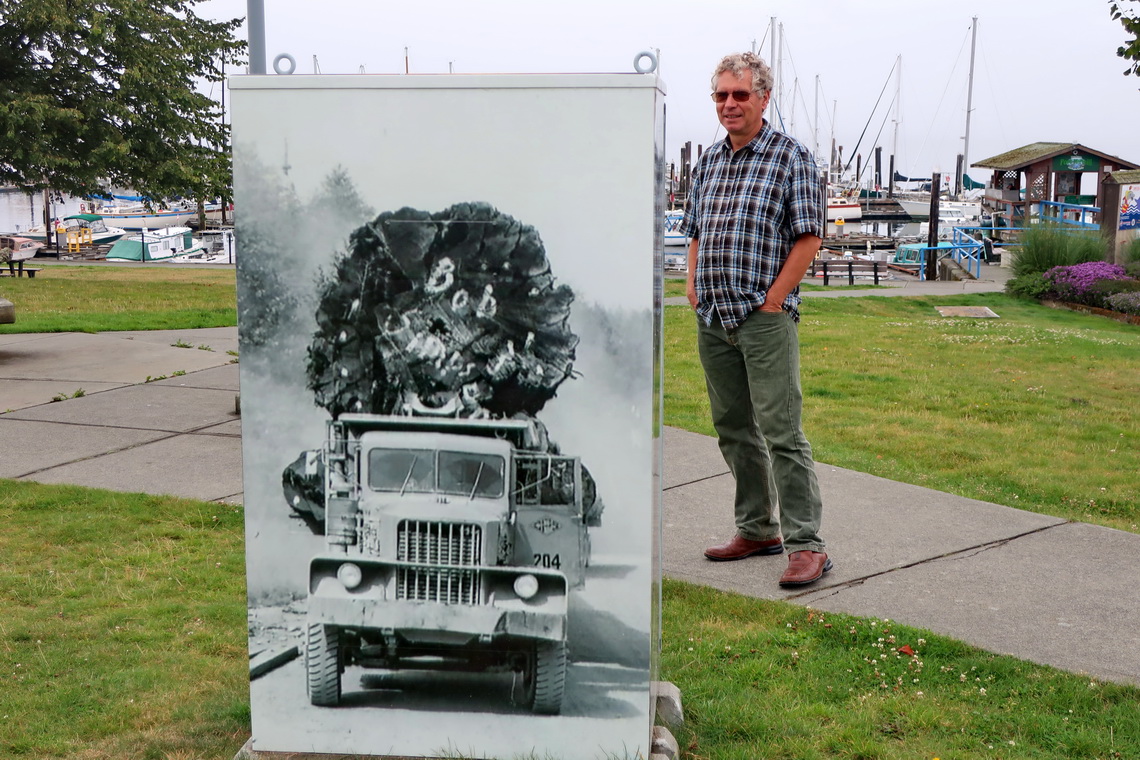 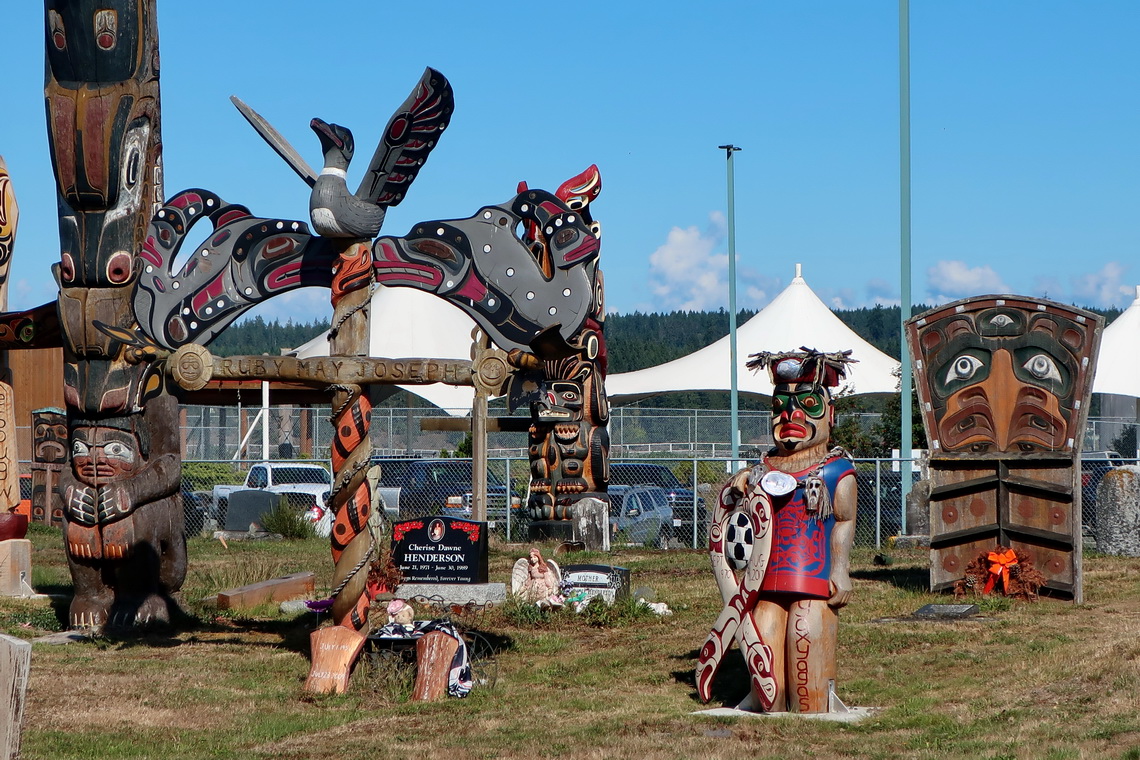 Finally we saw a fishing Black Bear few kilometers west of Campbell River. We had nearly finished the superb hike Canyon View Trail and came to the car bridge over Campbell River where a boy shouted "A bear is downward the river". The beast was slowly strolling on the north shore of the river. The fishermen were shouting because some of them were also in the water on the north shore. One of them was really scared because the Bear passed only few meters above the man. The Bear didn't care and continued. We followed on the southern shore and made many pictures in the distance. After 500 meters the Bear caught a Salmon and disappeared in the forest. 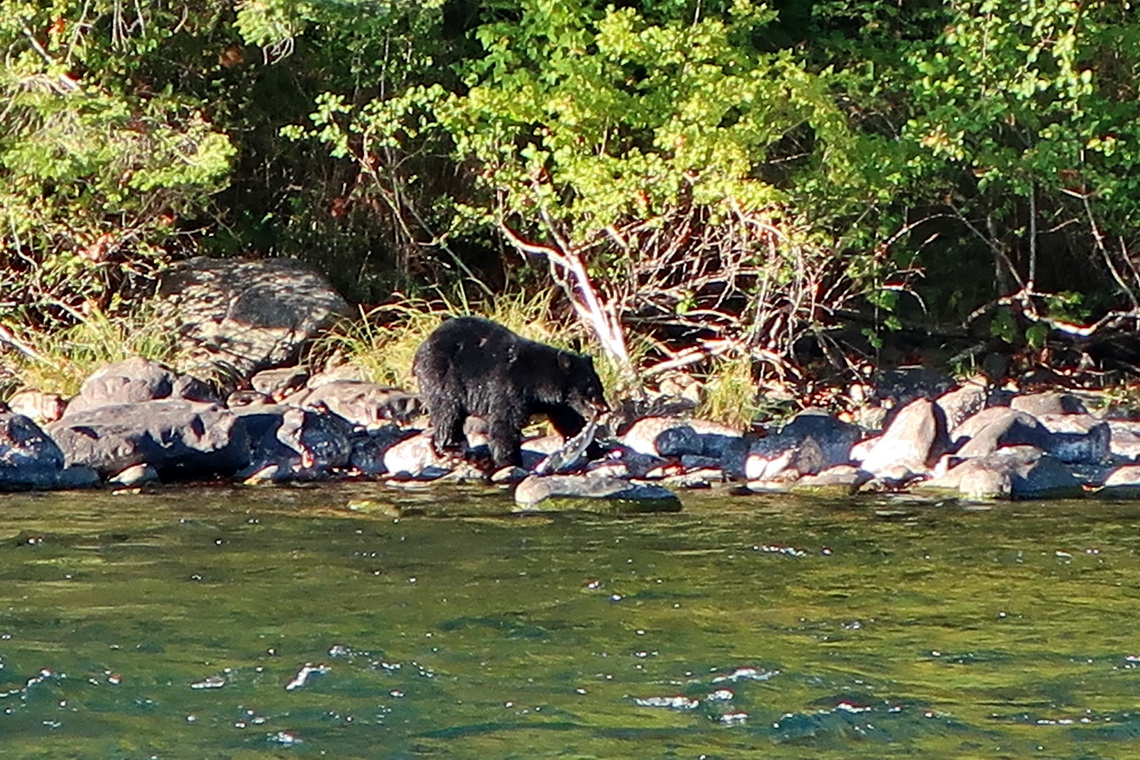 In the center of Vancouver Island is the Strathcona Provincial Park with the tallest mountain of the island. Some are a little bit higher than 2000 meters sea-level, but they have massive glaciers. Firstly we hiked to the two peaks of Crest Mountain (1558 meters sea-level), which is longer day tour of 14 kilometers and 1,300 meters vertical difference. More strenuous was Flower Ridge (1535 meters sea-level) but we were awarded with marvelous views to the glaciers of Mount Rosseau (26 kilometers long and 1,800 meters vertical difference). 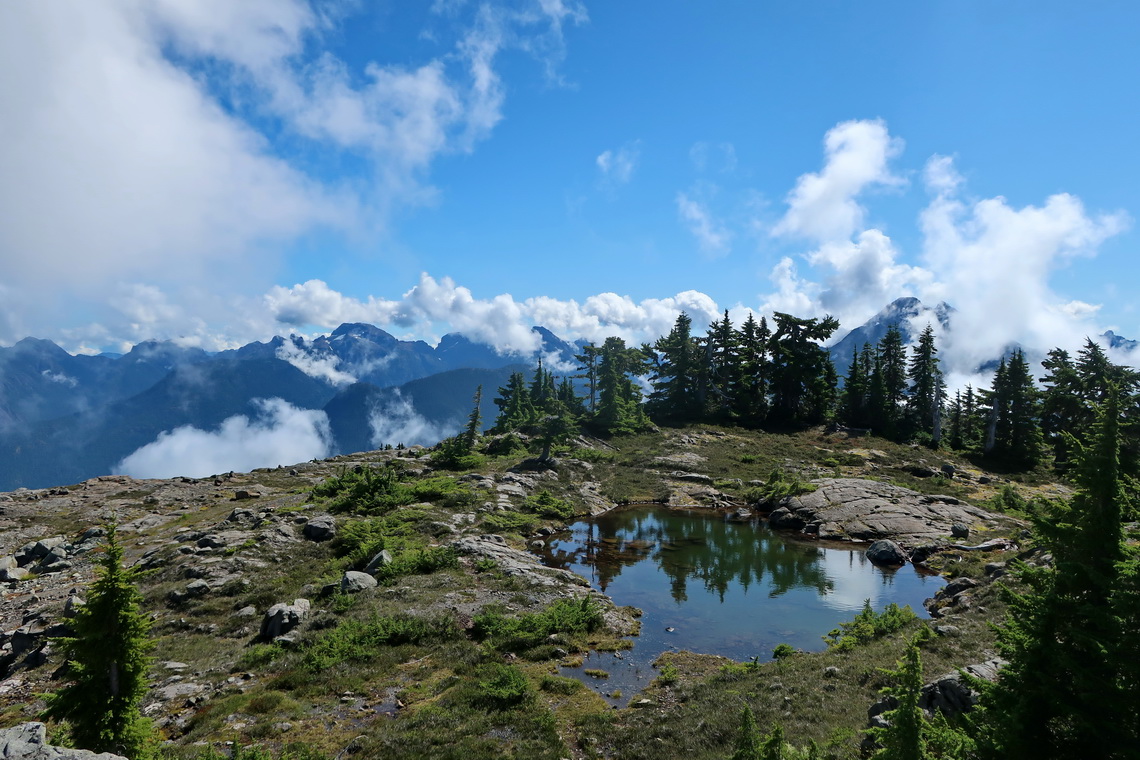 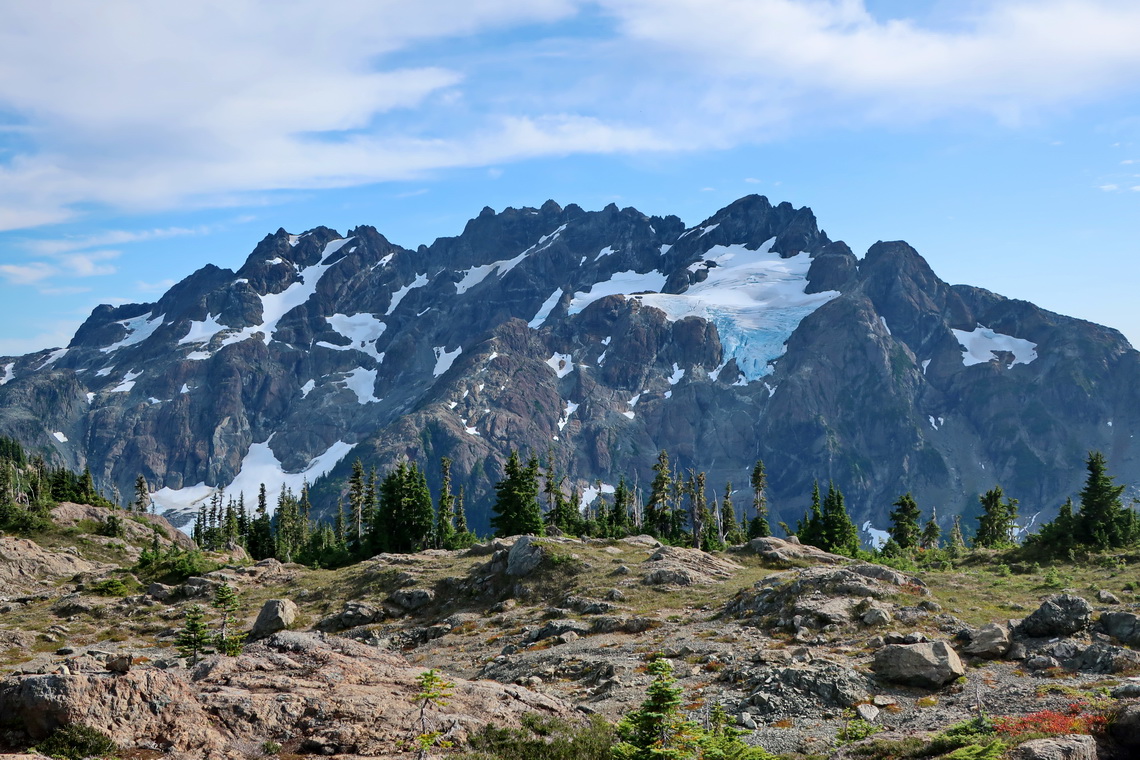 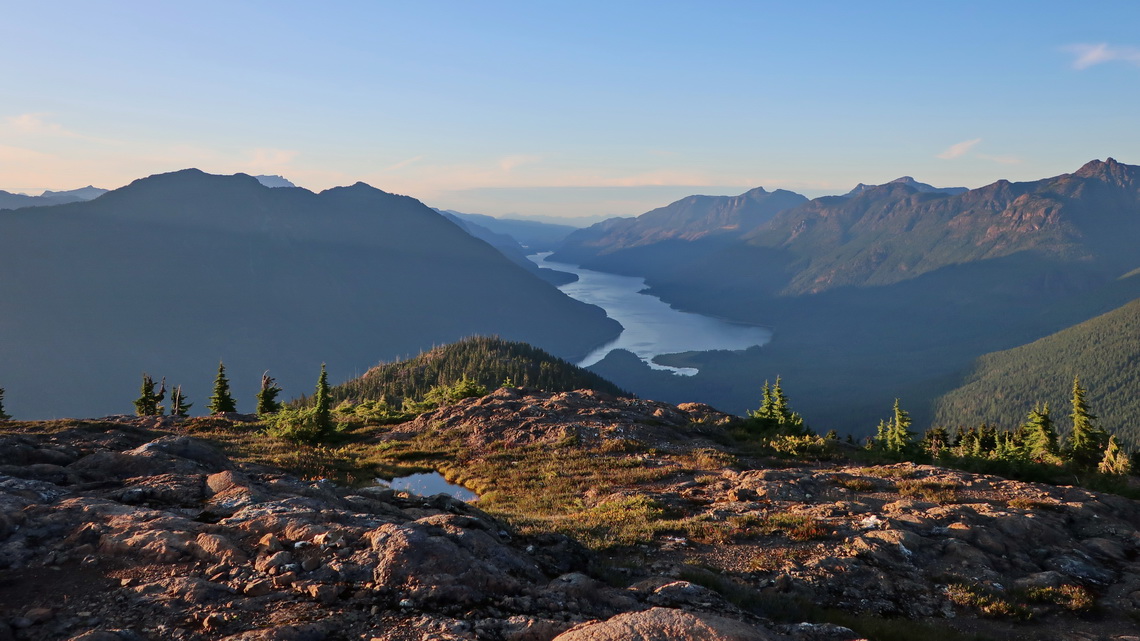 All our trails of Vancouver Island are included in the GPS Coordinates File of British Columbia.

Back to the coast we saw a school of Orca - Killer Whales hunting in the Ocean. Unfortunately they were very far away for a good picture. There is one in the picture section but we could spot them very well through our binocular - an outstanding ecperience. We celebrated Marion's birthday with some beer, chips and fresh Salmon in the harbor of Nanaimo. From Nainamo we took to ferry to North Vancouver (just 2 hours). 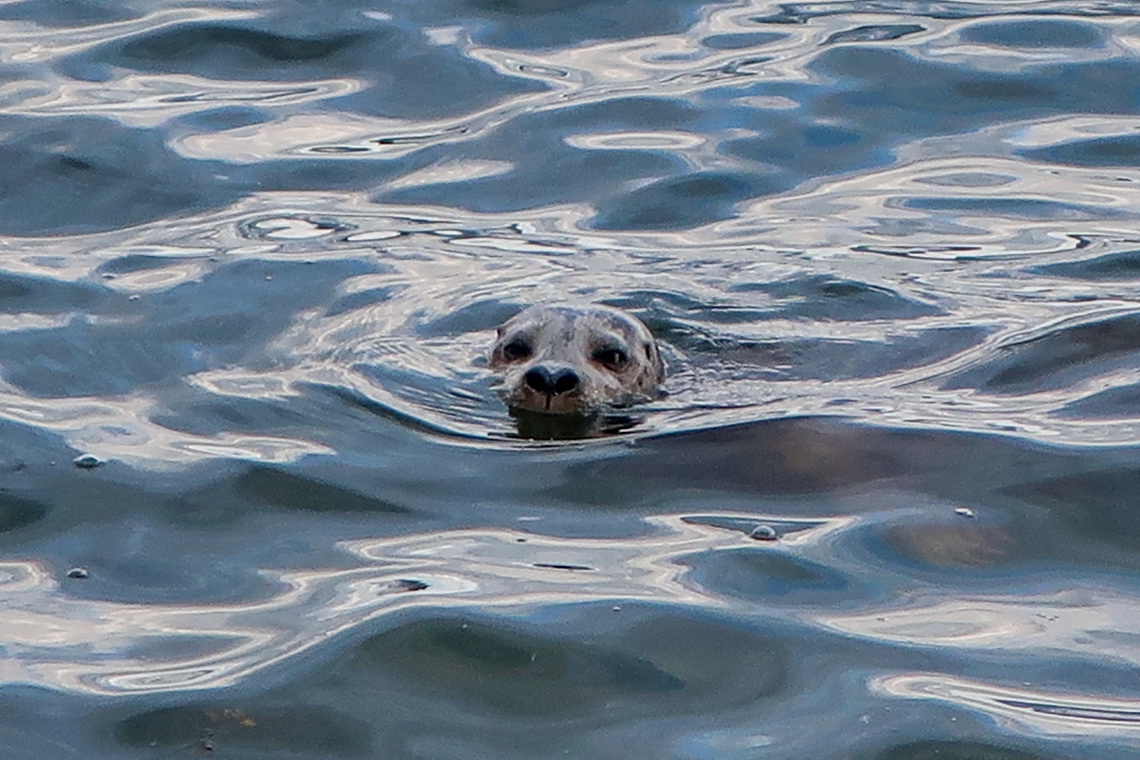 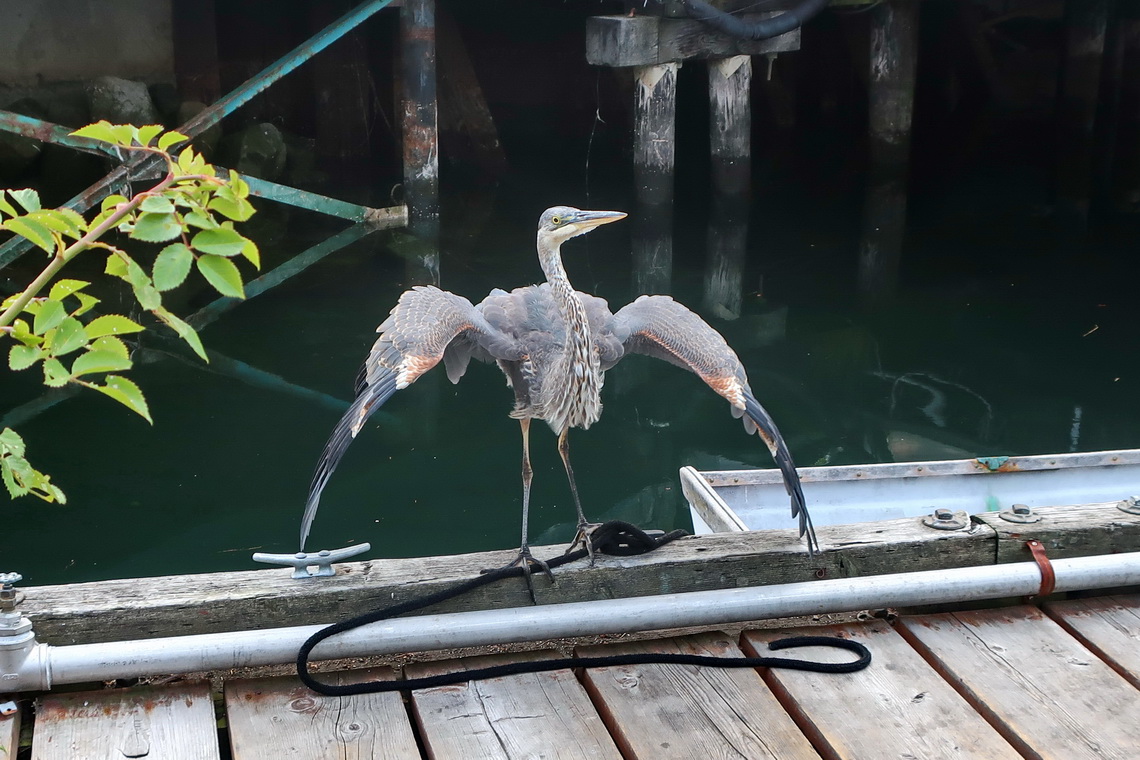 In North Vancouver we stayed three night on the parking lot of Kings Mill Park, where we had stunning views of the skyline of downtown Vancounver which is on the other side of the channel. 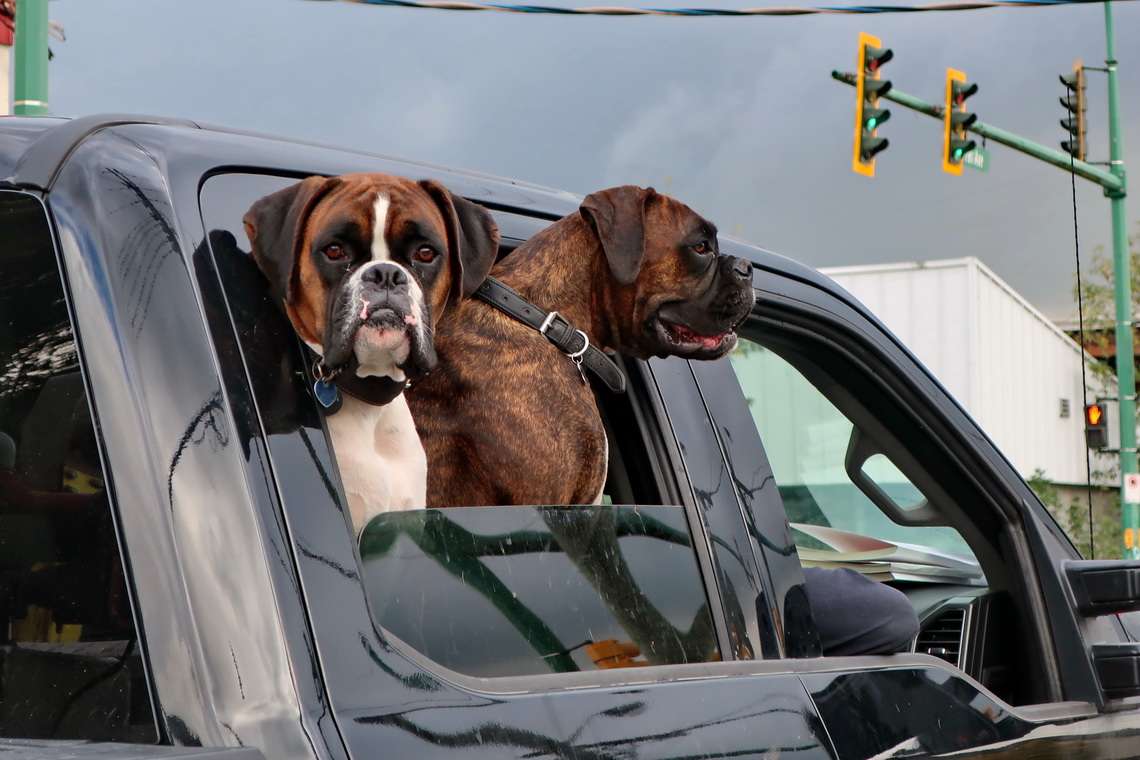 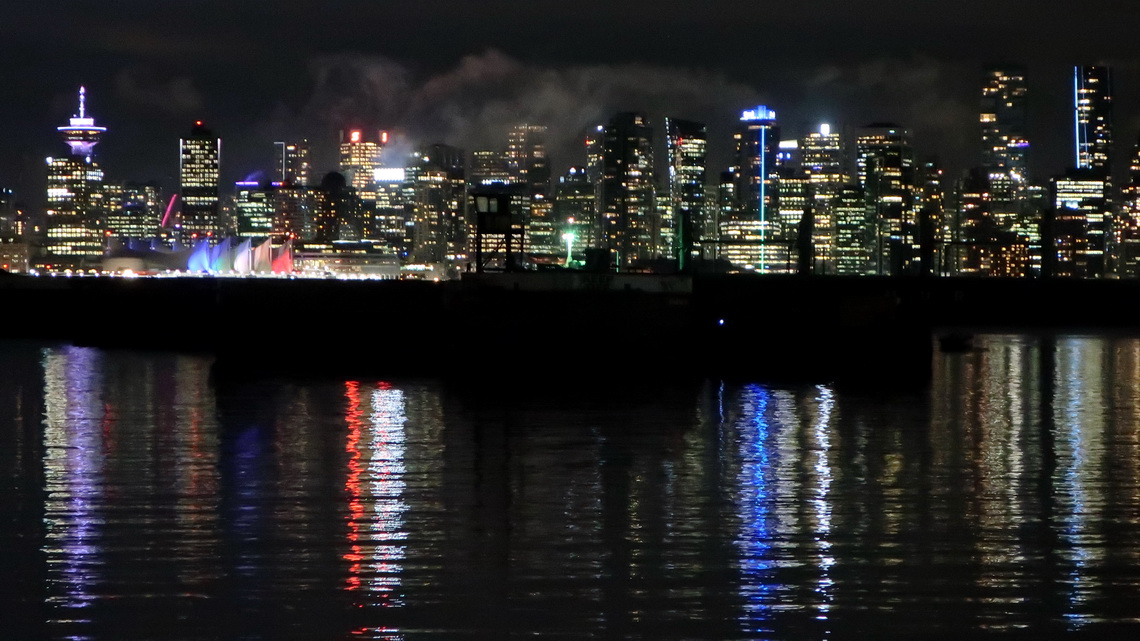 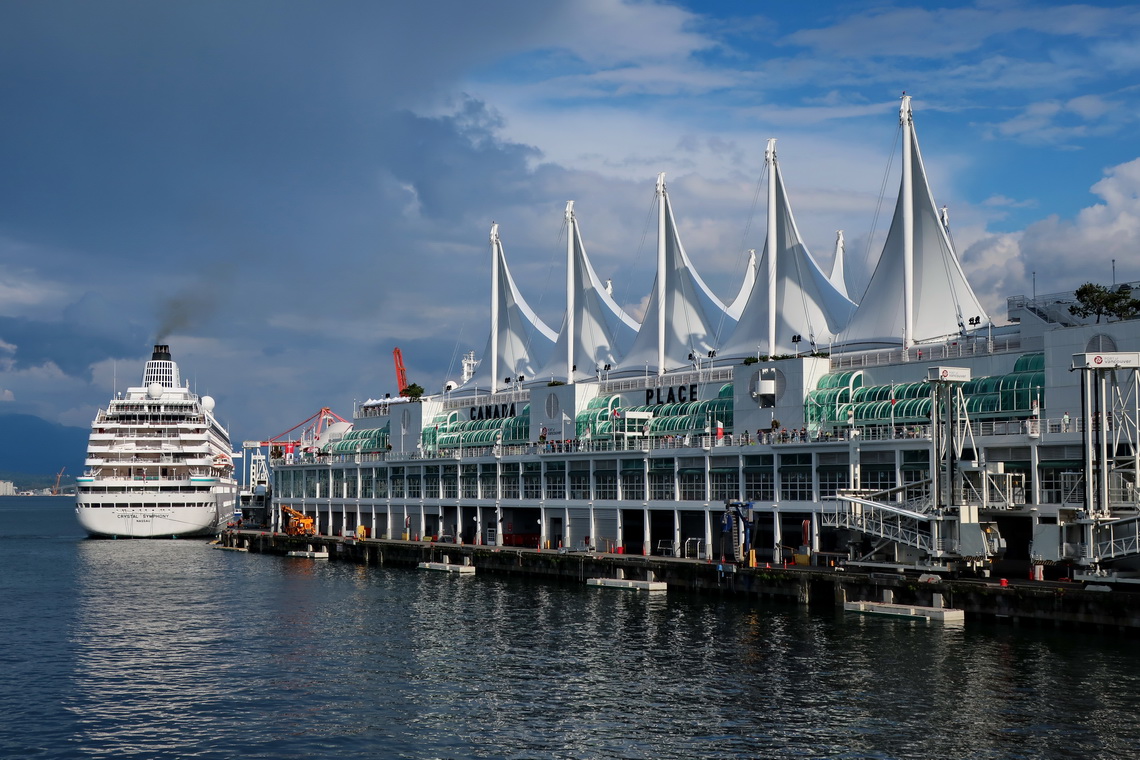 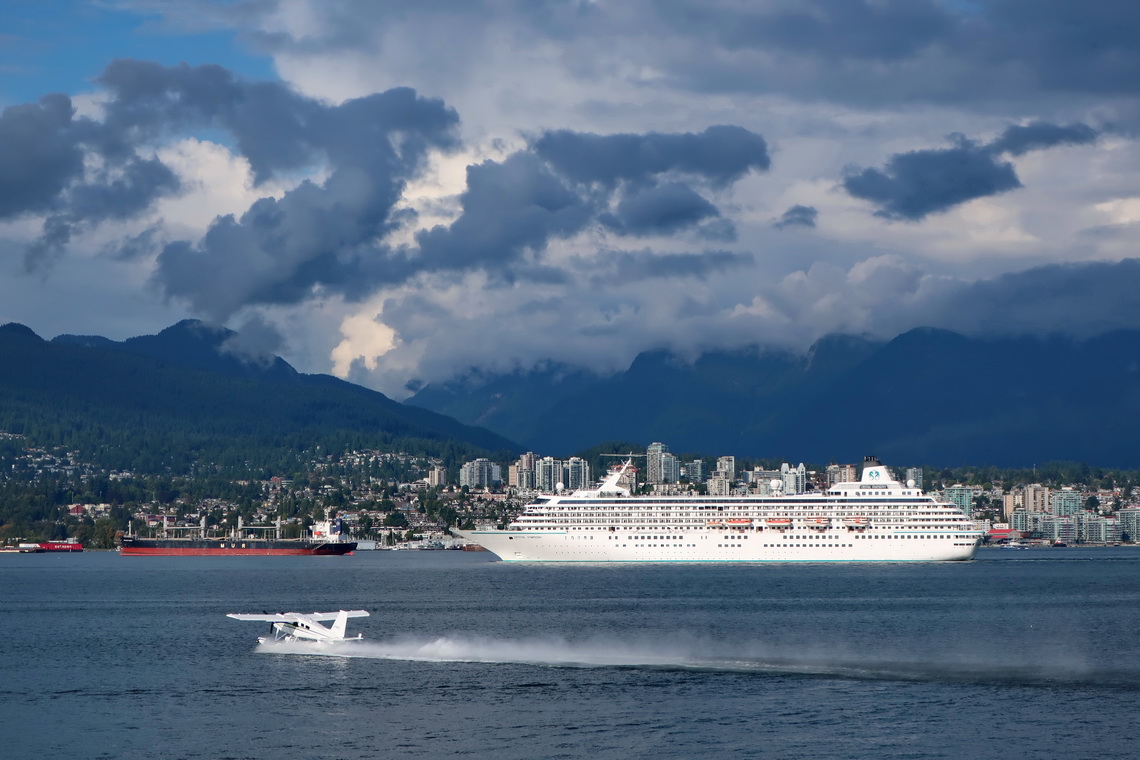 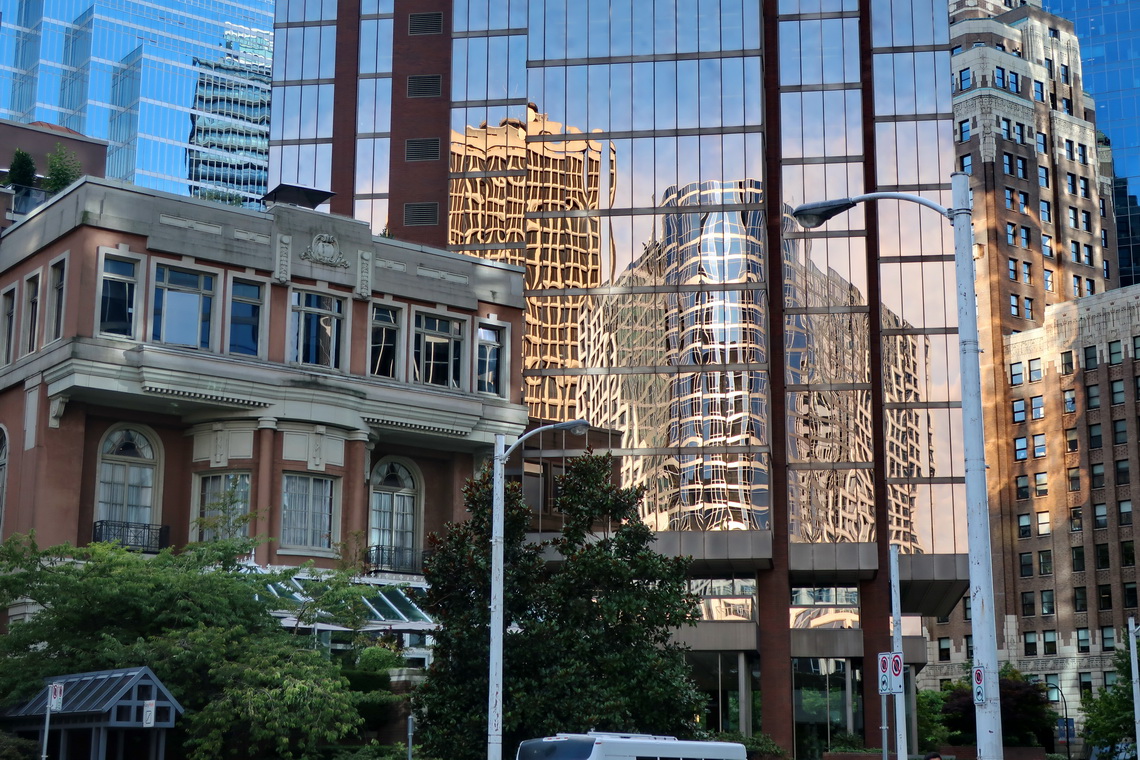 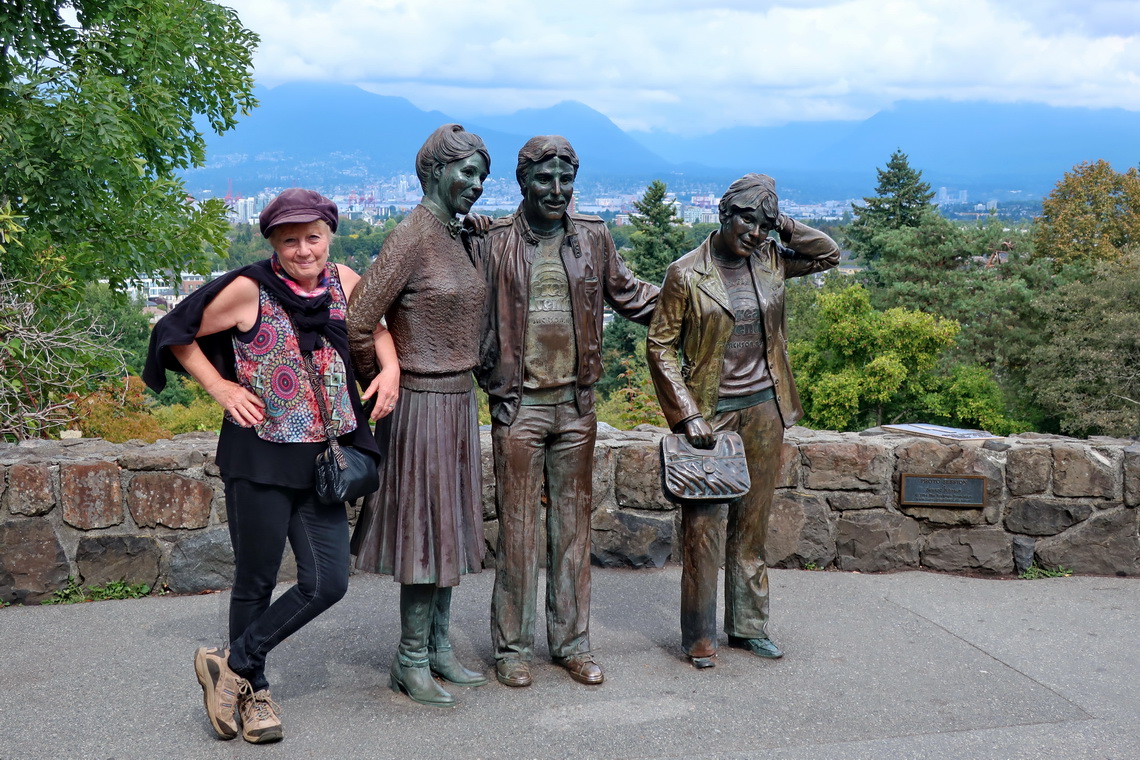 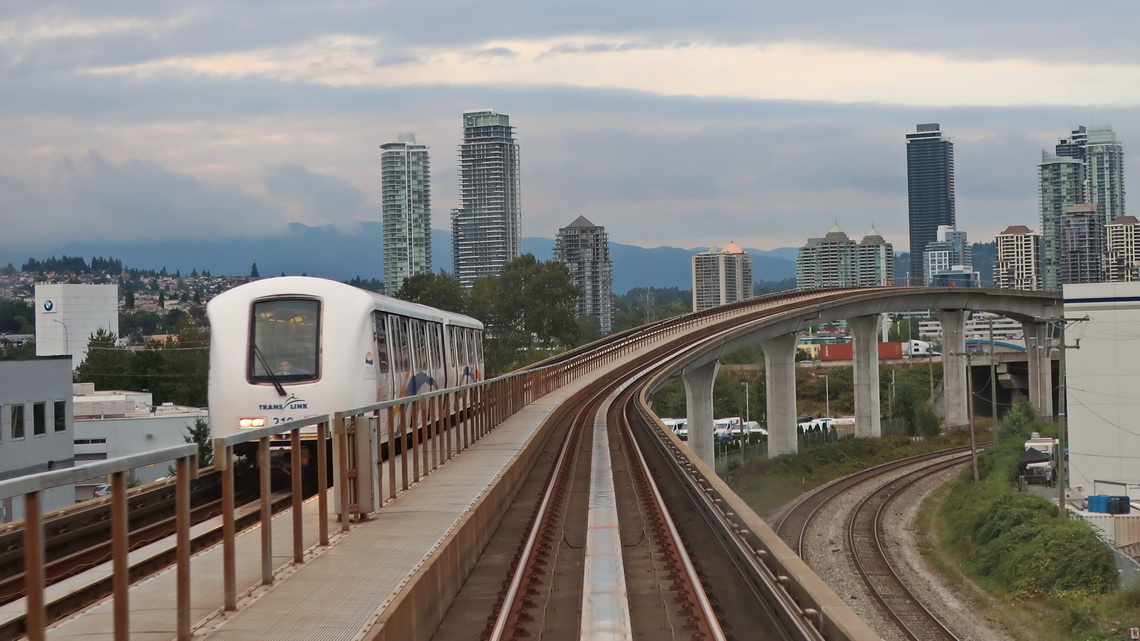