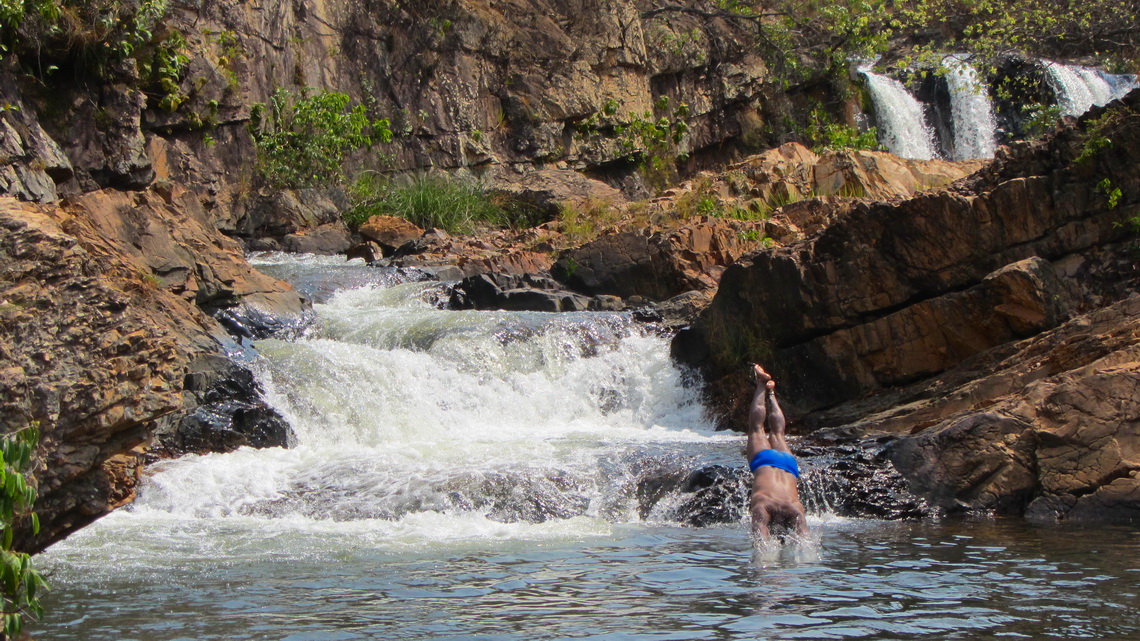 When we said goodbye to Luiza and Luiz in Brasilia they had given us an address on a slip of a German Lady in Moinho and he had pointed out that we must visit her. Moinho is few kilometers Northeast of Alto Paraiso de Goias. But we spent our first night in Alto Paraiso de Goias on the remote campsite Vale Azul (Blue valley - GPS coordinates S14° 08.678' W47° 30.755') and we had a strange visitor in the late evening. 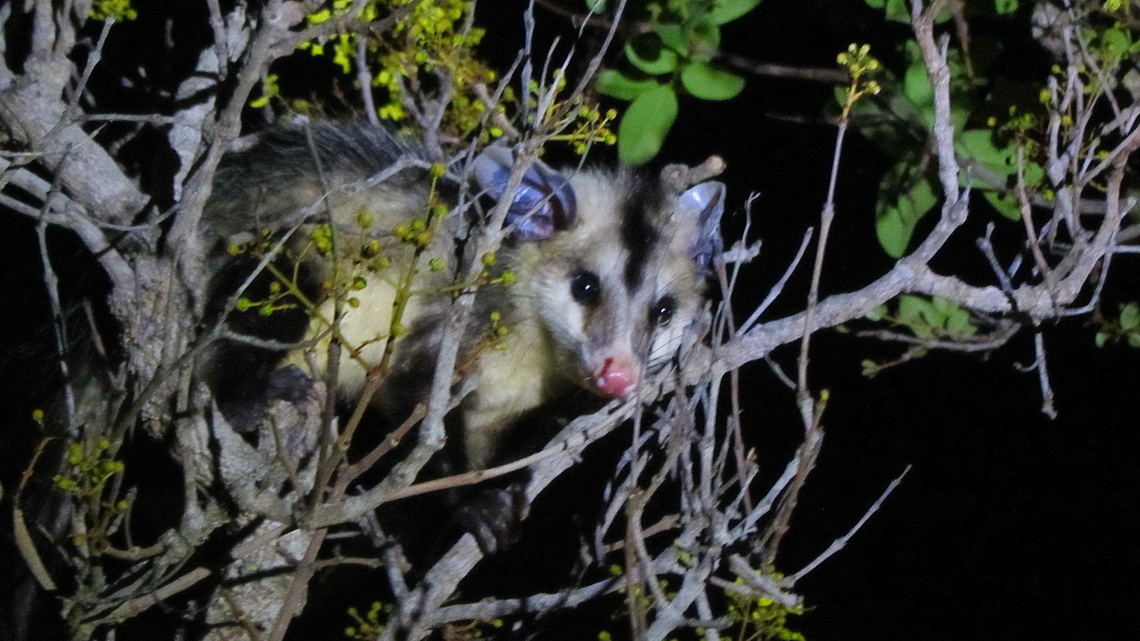 When we came into town on the next morning we purchased some bread in a bakery. Suddenly a Lady shouted in German: A German car that's unbelievable. It was Samvara from Moinho and she laughed when we showed her the slip from Luiz with her name and telephone number. Immediately she invited us to her home and we learned a lot about Brazil and Alto Paraiso de Goias. She lives at the very end of Moinho in an incredible nice area and she assists people on breathing exercises, see her attractive webpage www.samvara.info. We had a lot of fun with her - Thank you so much, Samvara and also for your exceptional hospitality. 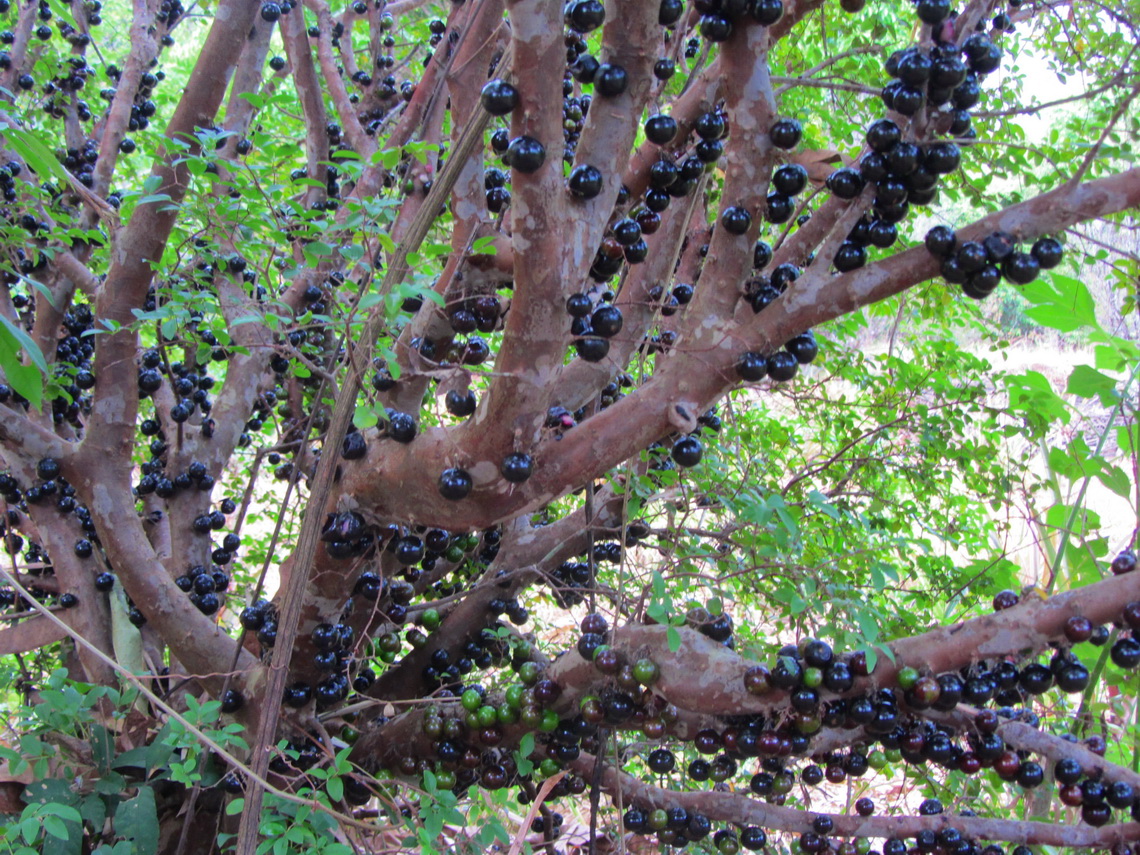 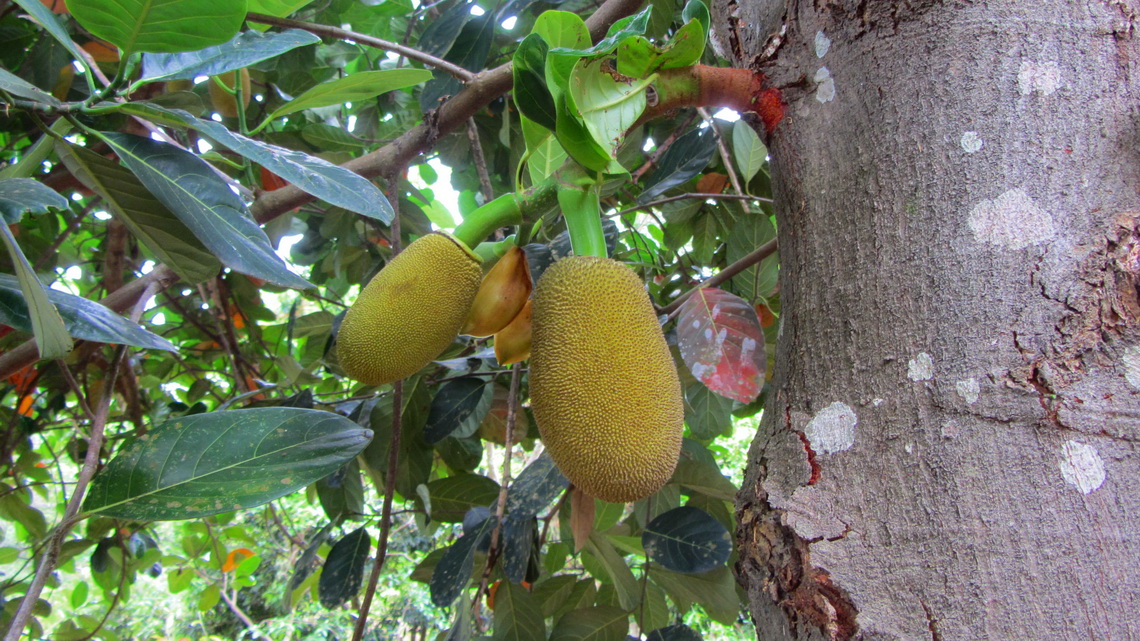 Soon we detected the spiritual life of Alto Paraiso de Goias. Everywhere are shops with mystic gems, joss sticks and Indian clothes. When we were together with Samvara, we met her neighbor Geetika in the evening. Every Saturday afternoon and Sunday lunchtime she plays fabulous music with exotic instruments in a stunning dome with an unbelievable good acoustics, see her webpage www.gotasatsom.blogspot.com. It was a wonderful experience, thanks Geetika. 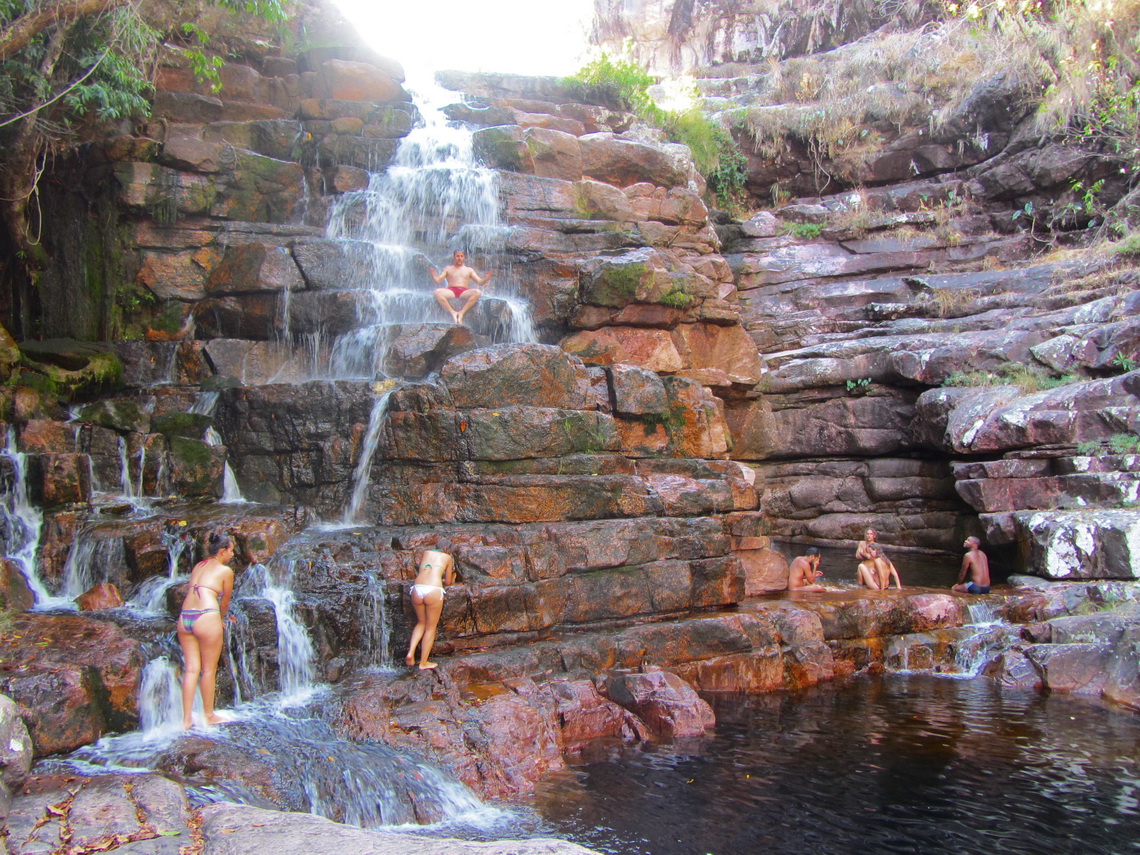 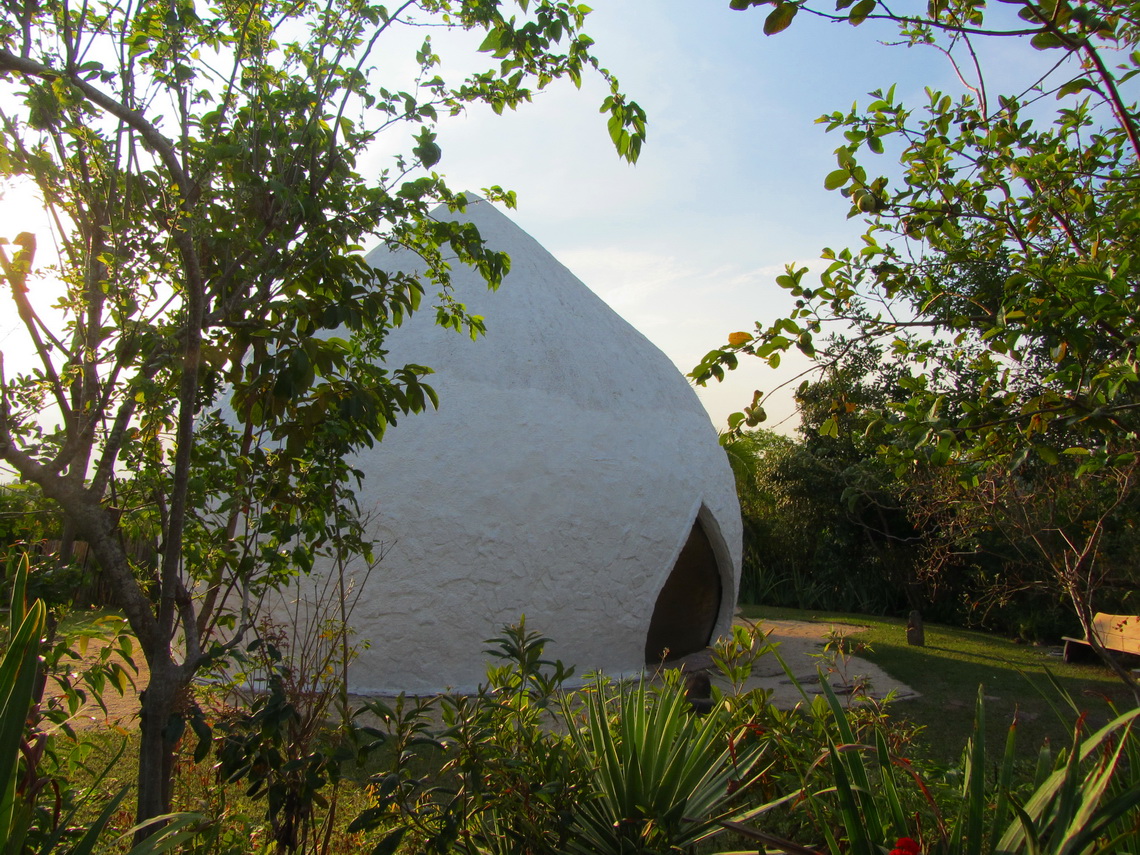 The Vale da Lua was formed by the rushing waters of the river Rio Sao Miguel over millions of years. It is a lunar like landscape with sculpted rocks, craters, gaps and pools in all shades of gray, white and sometimes red caused from rose quartz. 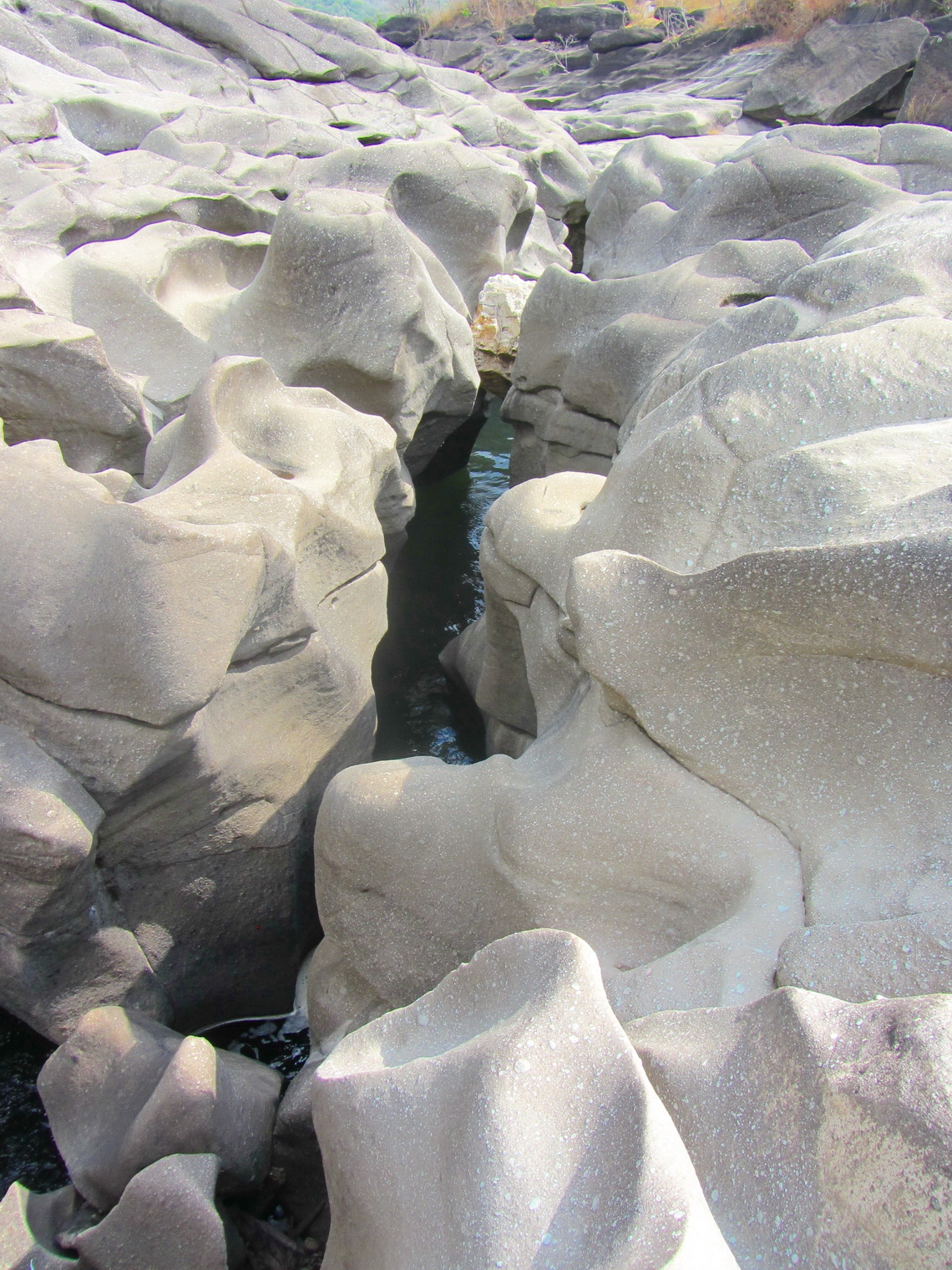 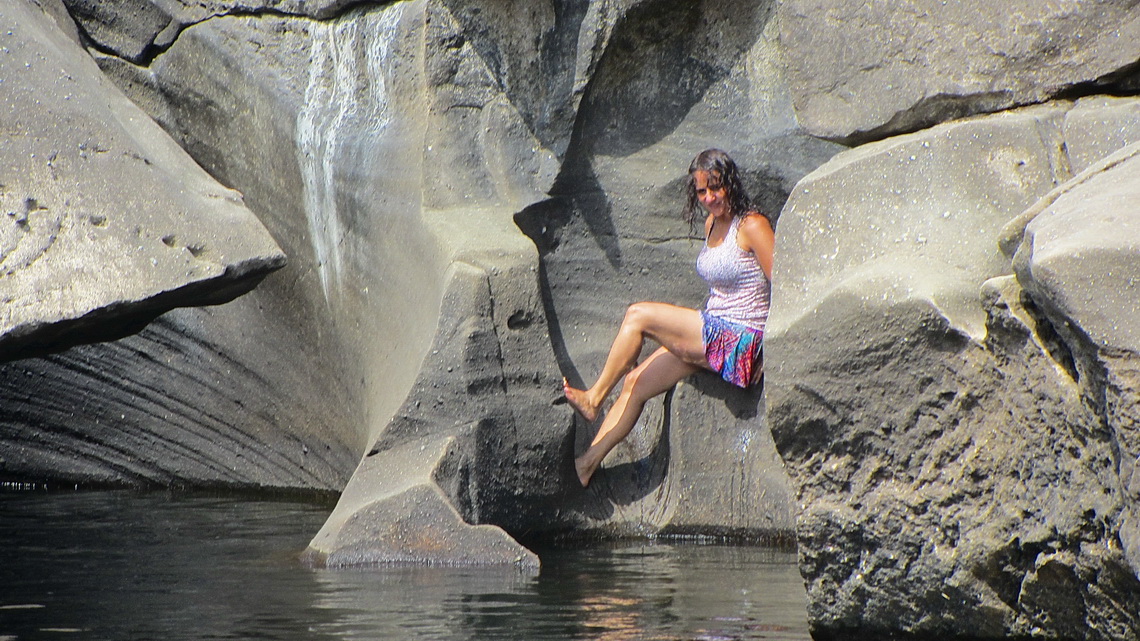 When we came to Sao Jorge we heard two girls chatting in German. One was Diana, which we knew from our visit of Marion and Volker in Brasilia. The other one was Carina from Austria. We had a common lunch, also with Roger, the architect of Geetika's dome in Alto Paraiso.

Diana and Roger left to work on the Brazilian / German project Living Gaia and we agreed with Carina to visit on the next day the Raizama waterfalls with her and Marcelo, a Brazilian guy whom she had met few days ago. 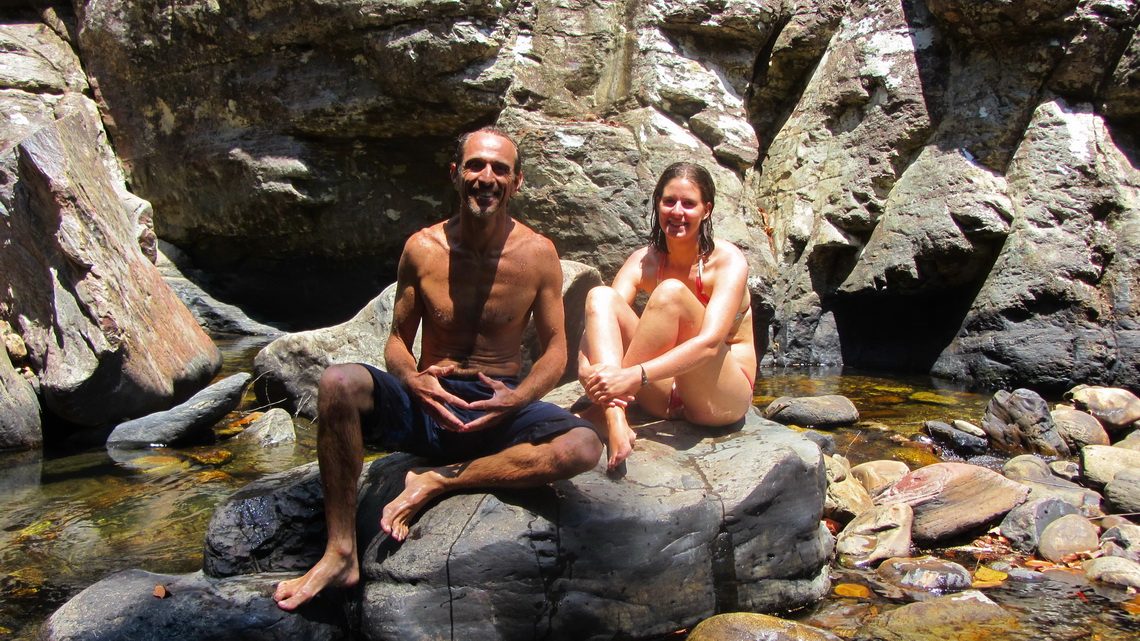 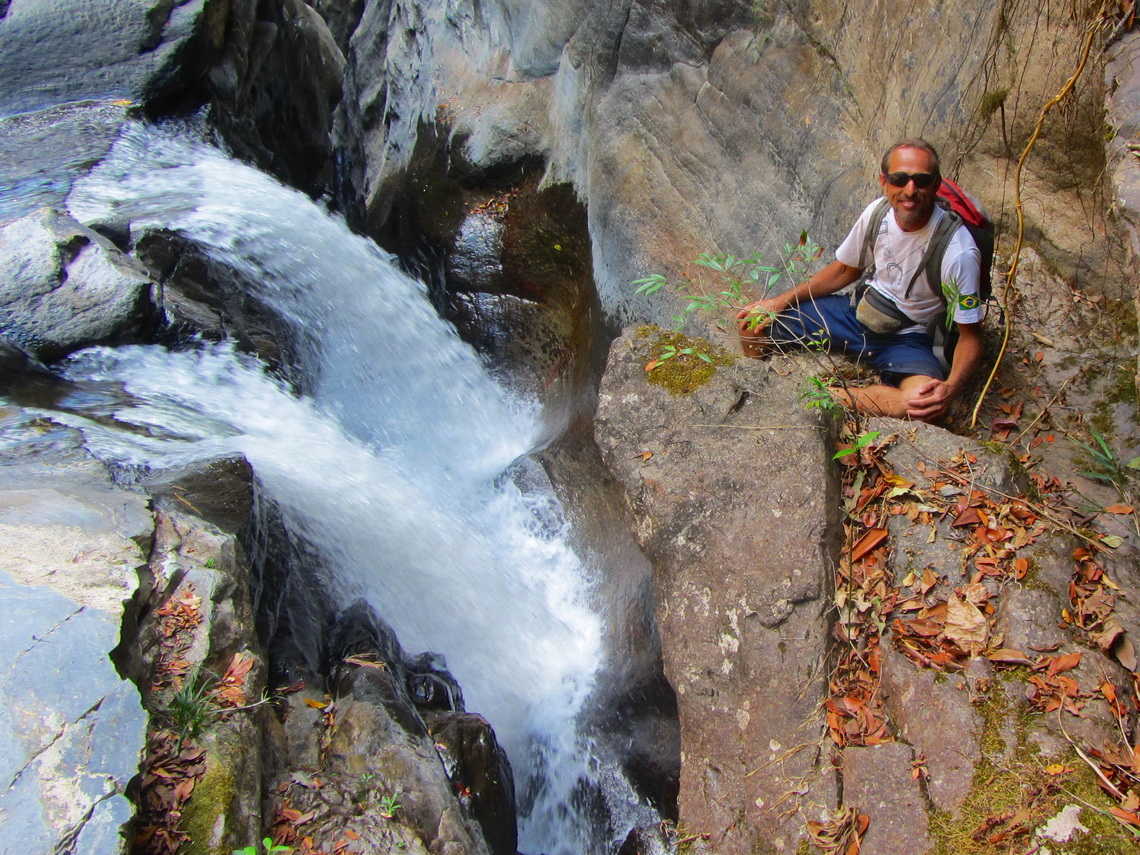 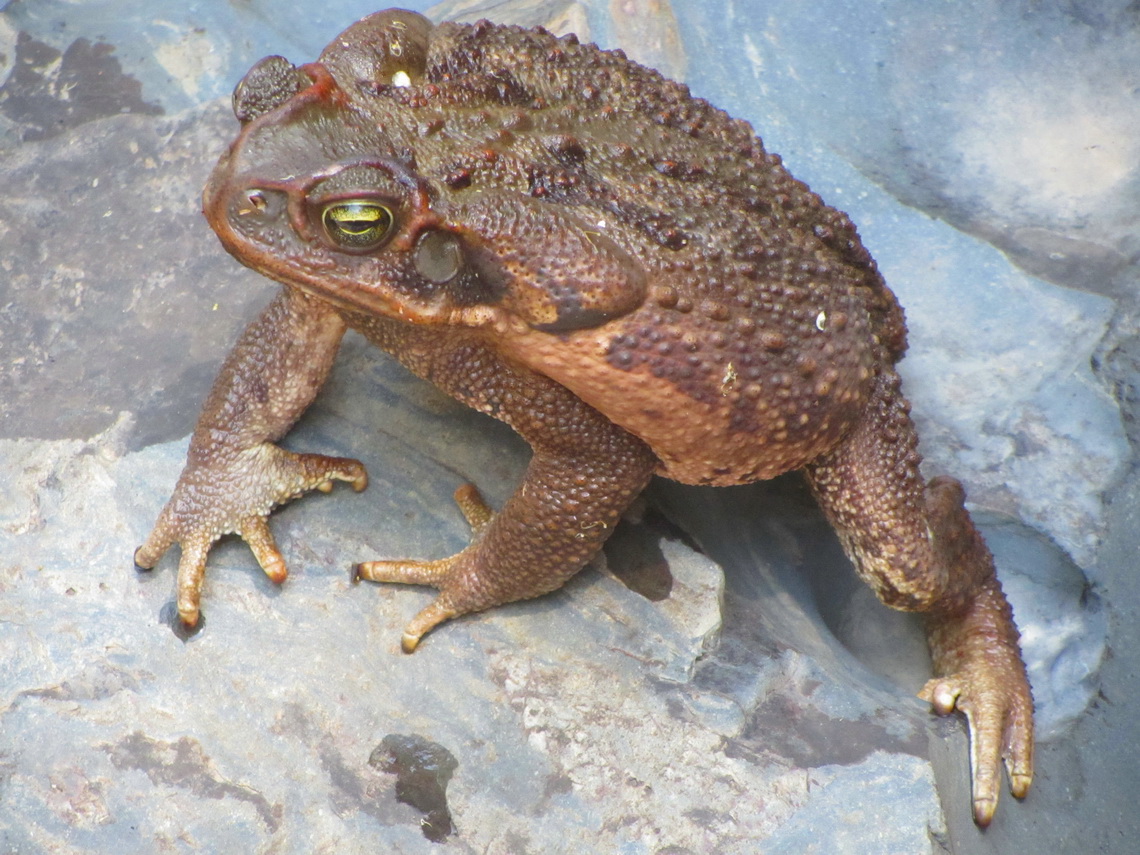 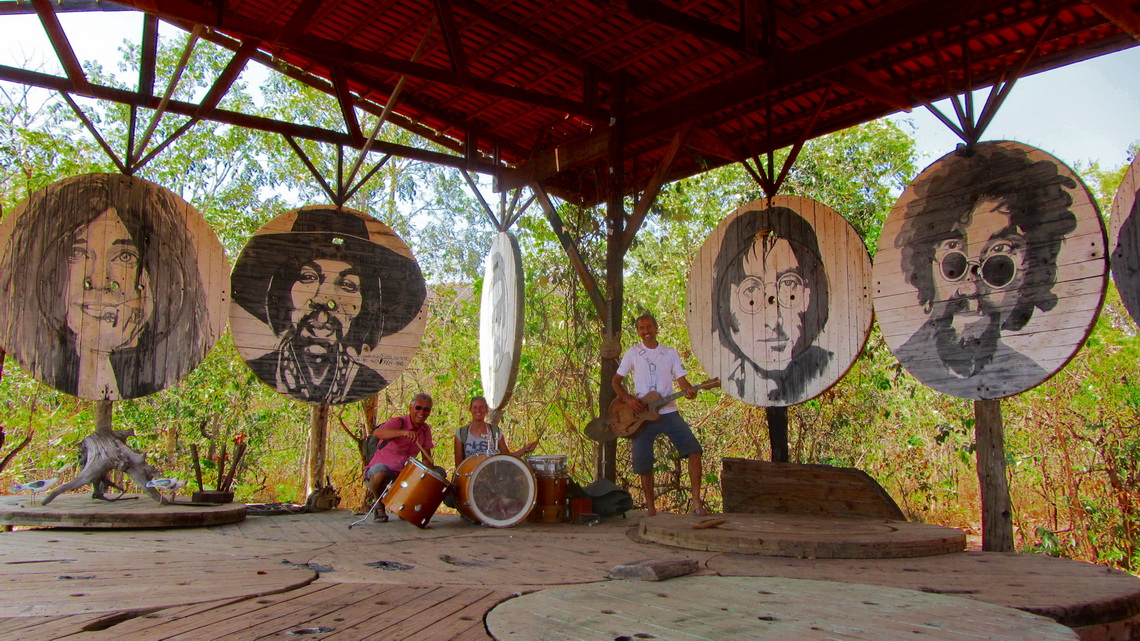 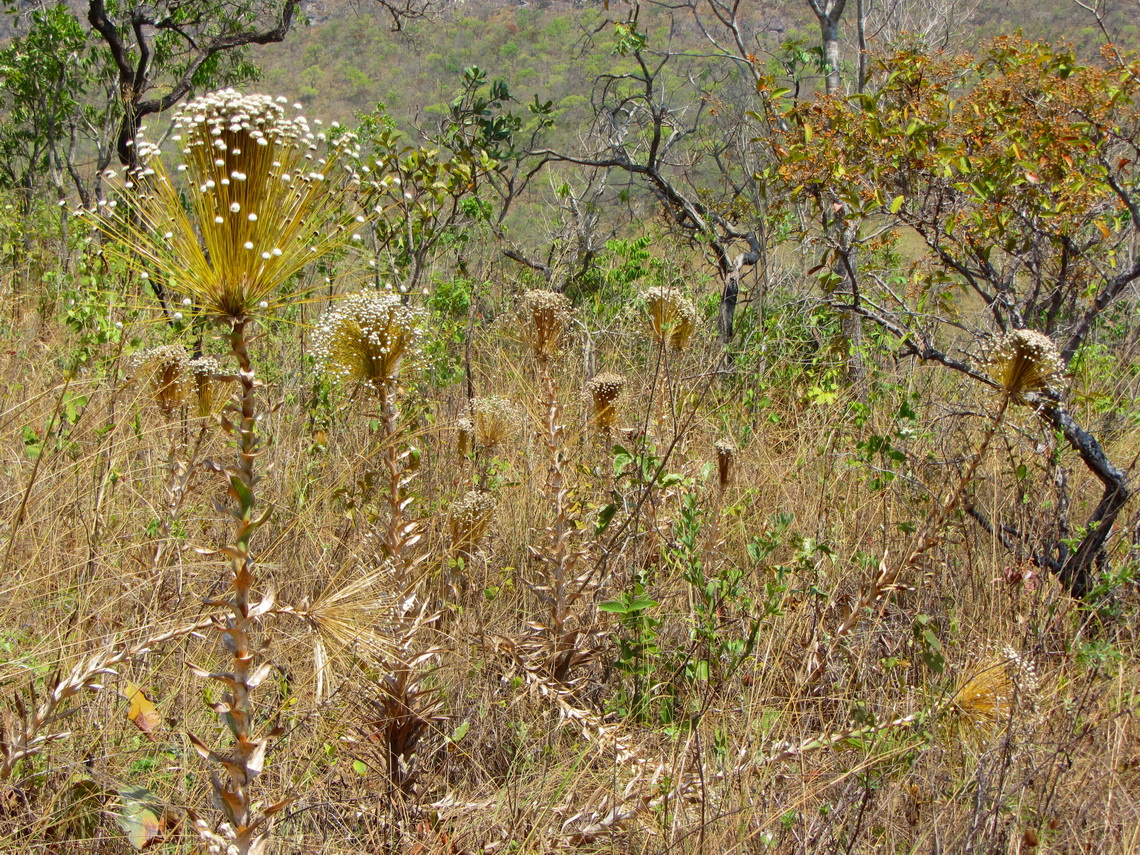 Marcelo is a member of the Brazilian climbing scene and he loves the mountains, too. We had a lot to discuss with him and he gave us valuable hints. He showed us also his lodging in the outskirts of Sao Jorge in the indigenous village Aldeia Multietnica. 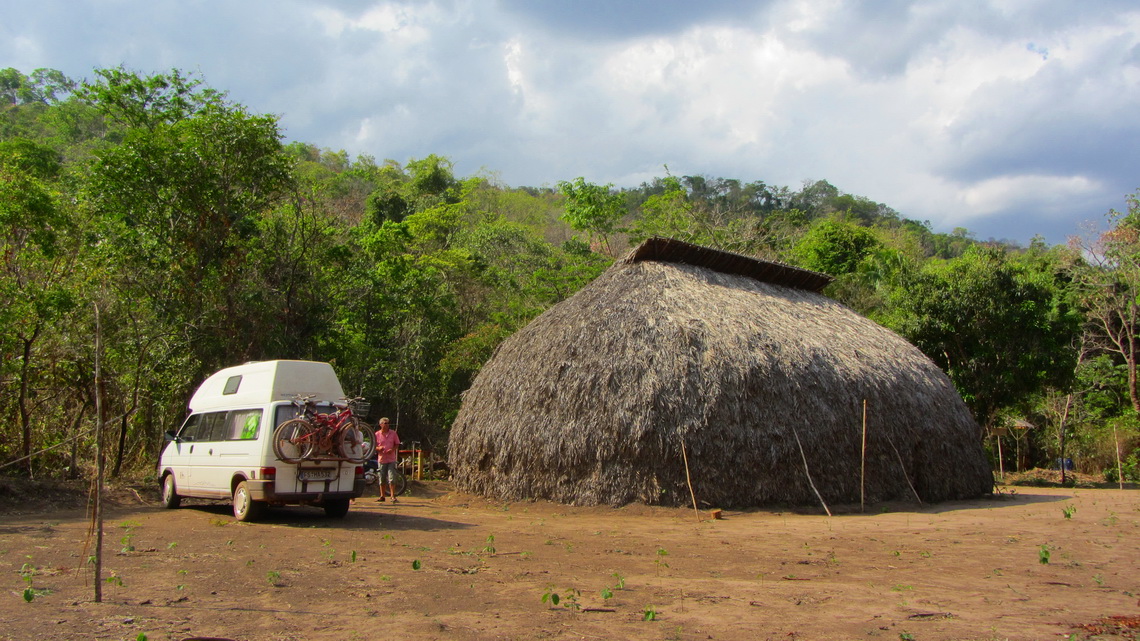 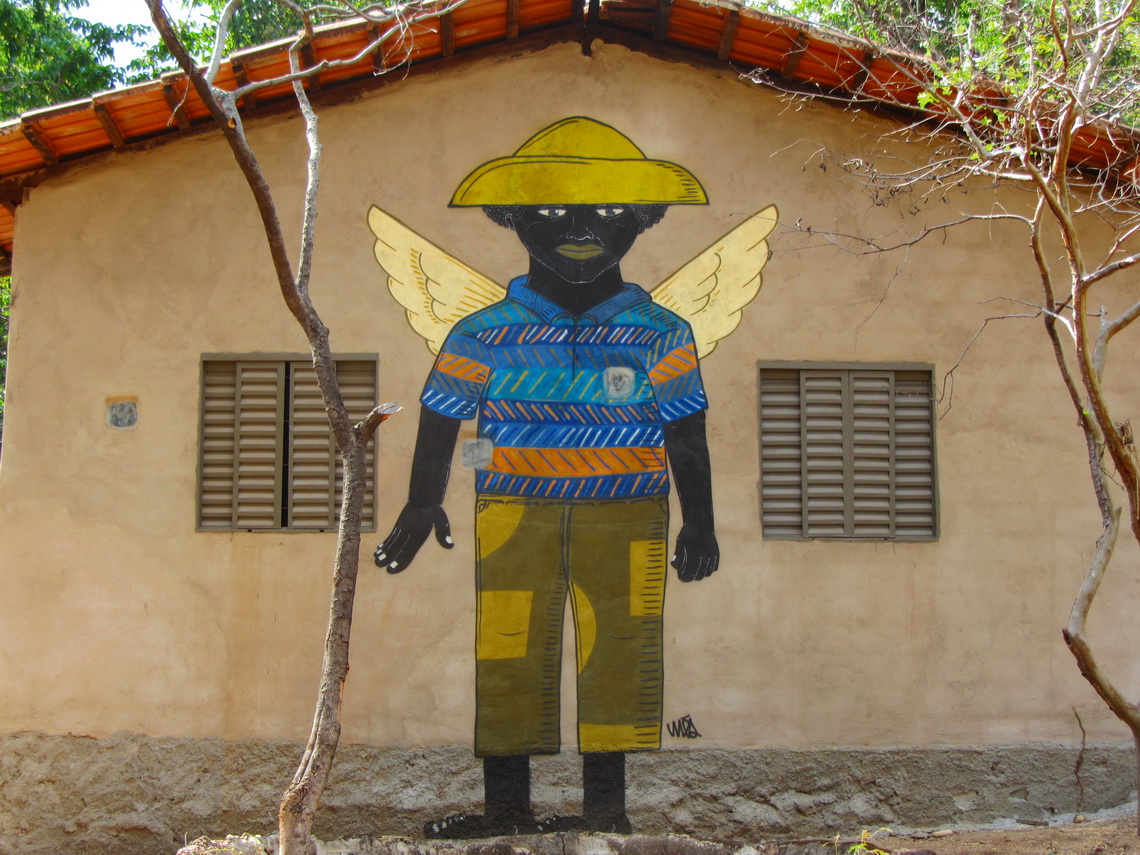 Marcelo wanted to do with Carina and us more tours but he got surprisingly a phone call to assemble a scaffold for the construction of a huge hall somewhere in the middle of Brazil. Unfortunately his account was very negative and this job was paid very well. Thus he left us in the late evening and we inherited all his food because he had to flight several times - Thanks a lot Marcelo, we had such a pleasurable time with you.

Carina came with us to the Chapada Diamantina which is a several days drive. We were more than happy to have her with us, it was a little bit like having a holiday daughter. We three had so much fun - Thousand thanks Carina. 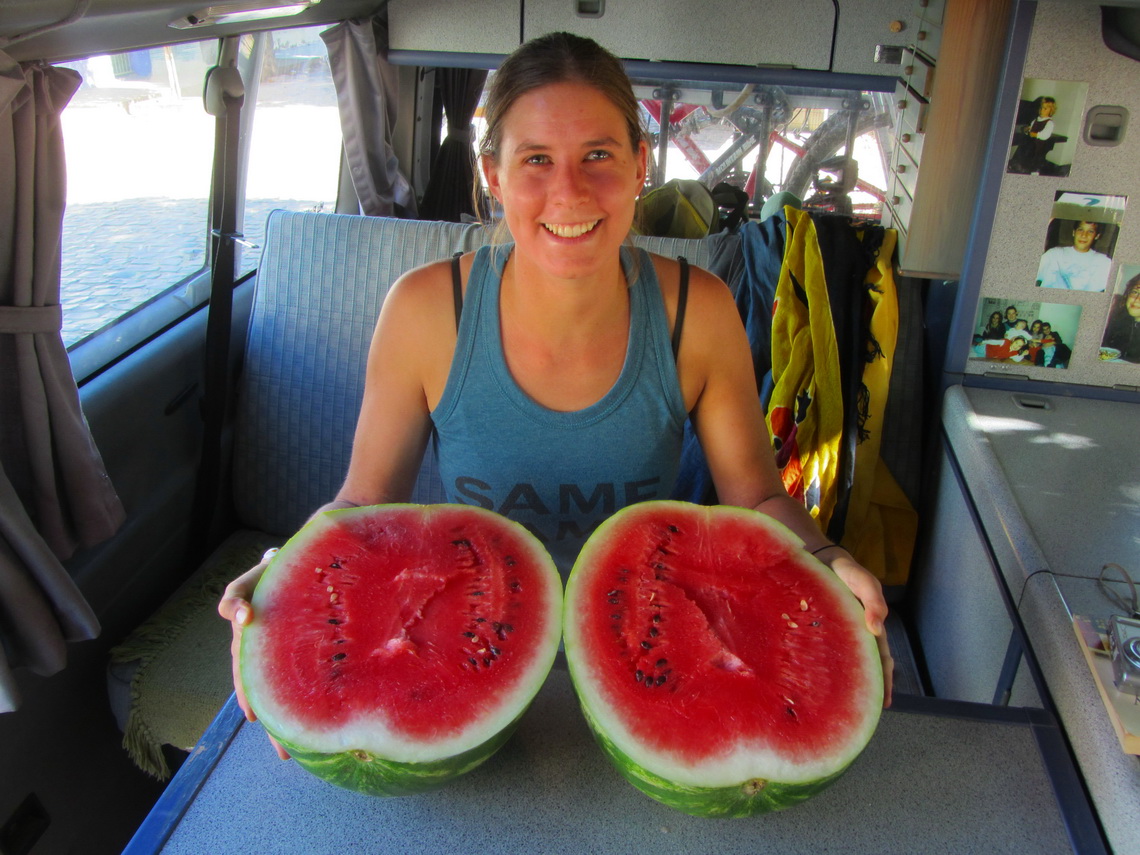 Firstly we hiked with her to the waterfalls Almecegas and Sao Bento close to Alto Paraiso. In the late afternoon we visited Geetika's music. On the following day we stayed the night at the Cachoeira de Acaba Vidas. Swimming was a little bit weird there because the main pool was few meters above the more than 50 meters high cascade and the current was a little bit strong. We three climbed our first mountain in Brazil, paddled in the swamps, and enjoyed African music and dancing in the Chapada Diamantina. 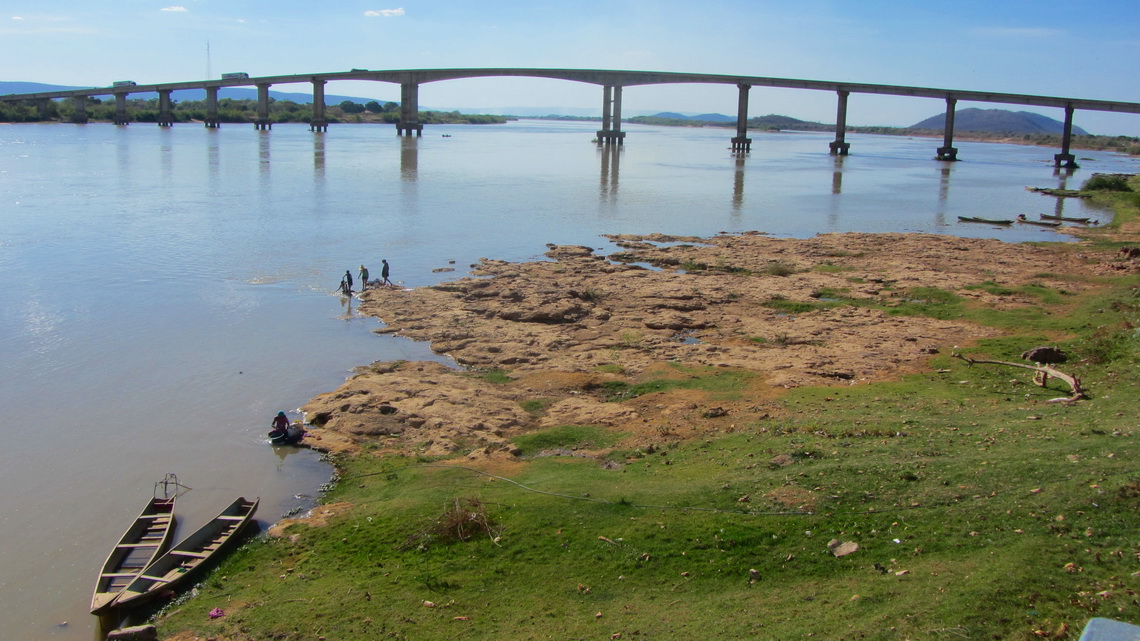 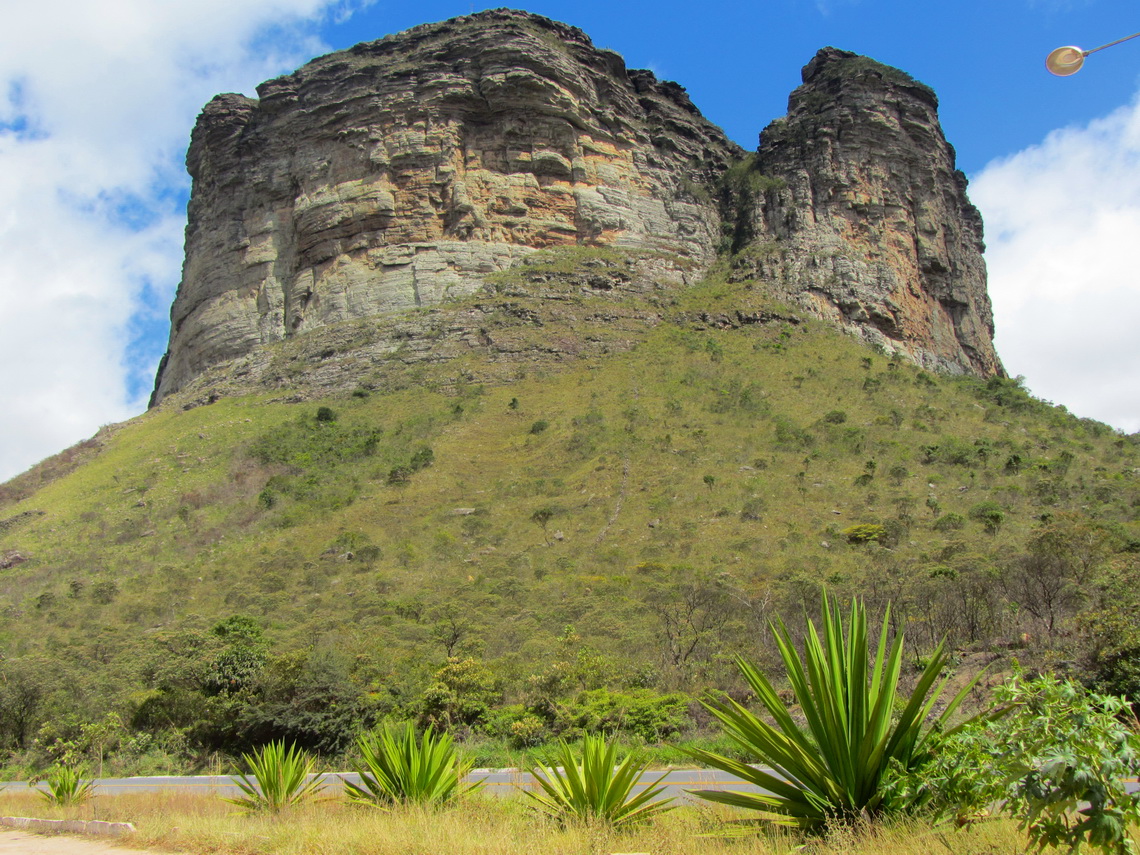 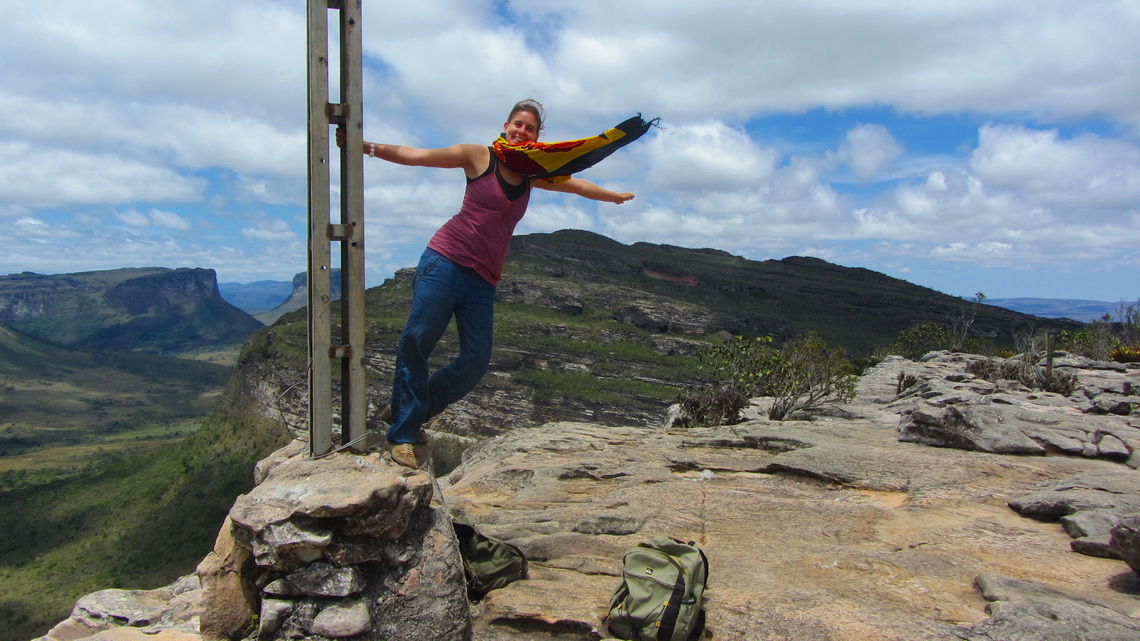 October 2nd 2012 we came to Lencois and we found the pleasant campsite Luminar close to the upper church Igreja do Rosario (GPS coordinates: S12° 33.849' W41° 23.330'). An extraordinary trip from Lencois are the swamps of Marimbus on the edge of the highland but the street to the access village Remanso is very rough without any signaling. First you have to drive approximately 5 km back the main road to a dirt road (GPS coordinates S12° 32.672' W41 ° 22.180') and then turn always right. It is about 15km on this dirt road.

Remanso is a tiny community of African people with a huge main square, several bars and some huts. We were warmly welcomed and Junio guided us. Firstly we paddled two hours downstream along the river Rio Sao Antonio to a restaurant in the jungle. After swimming in a nice pool we got the best meal in Brazil so far: Fresh sweet water fish, traditional beans, rice, salad and manioc. We continued another two hours downstream. Vegetation became so dense that our boat was covered fully by plants sometimes. Finally we hiked half an hour to a marvelous waterfall. 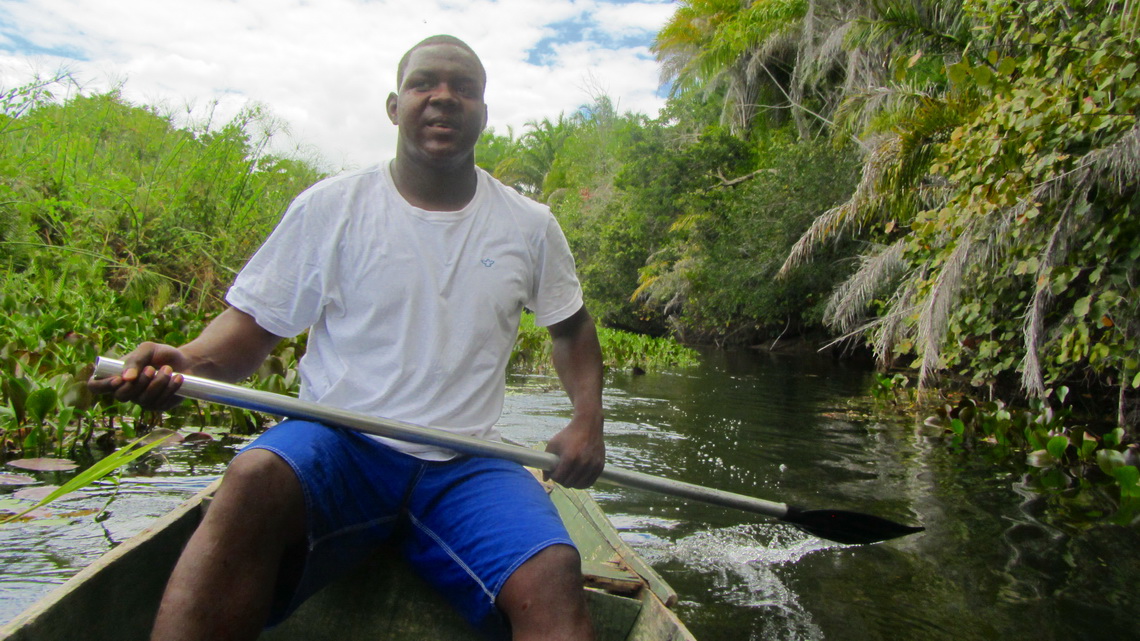 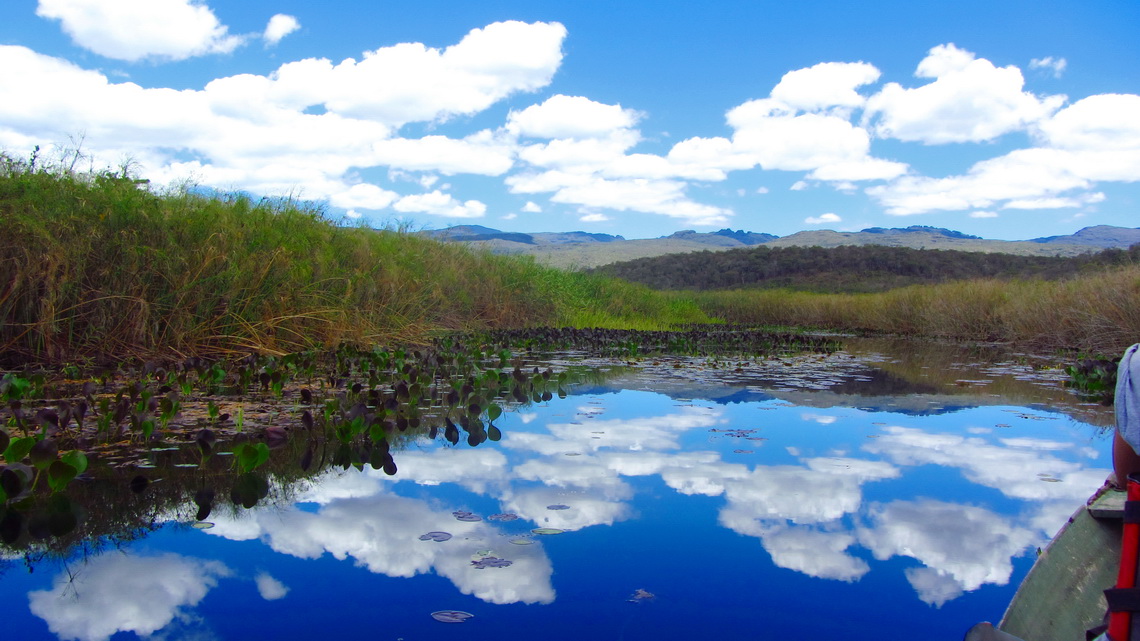 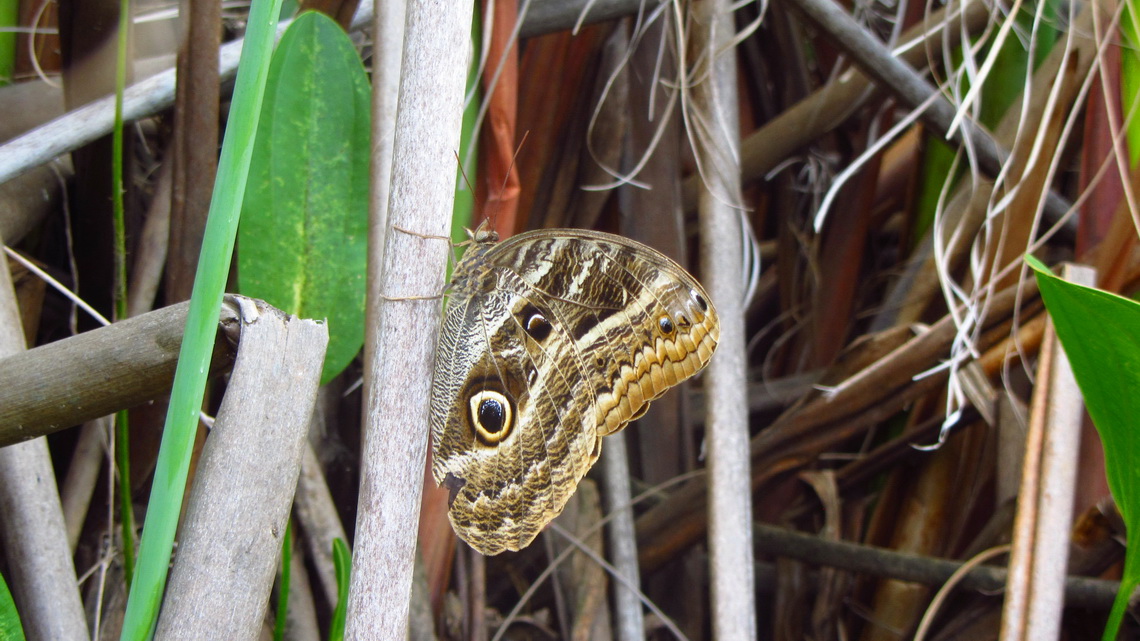 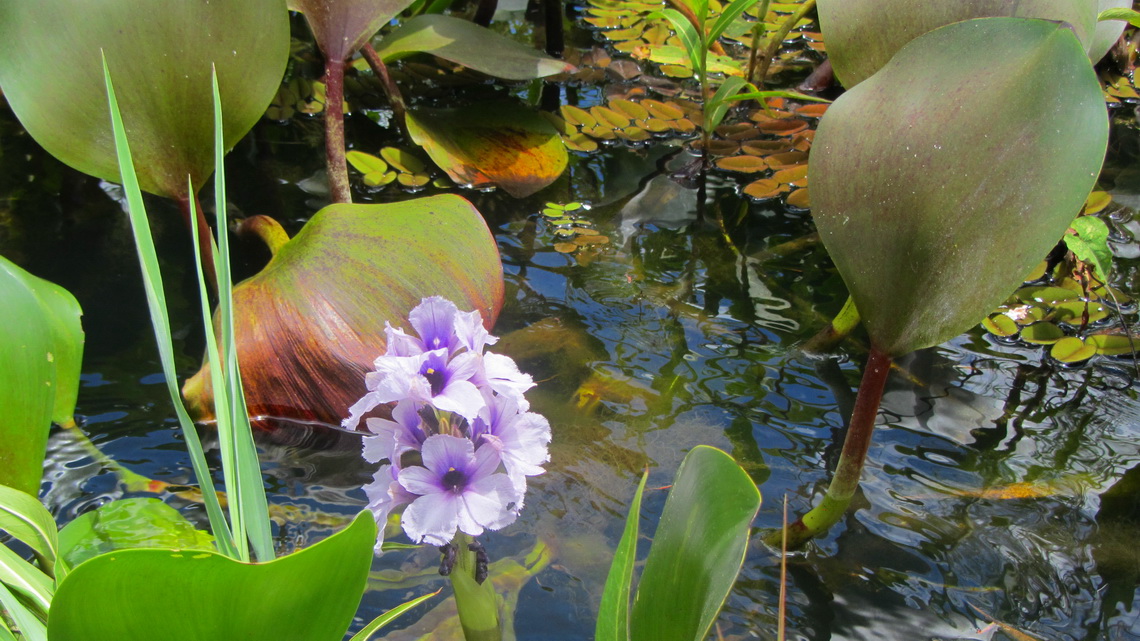 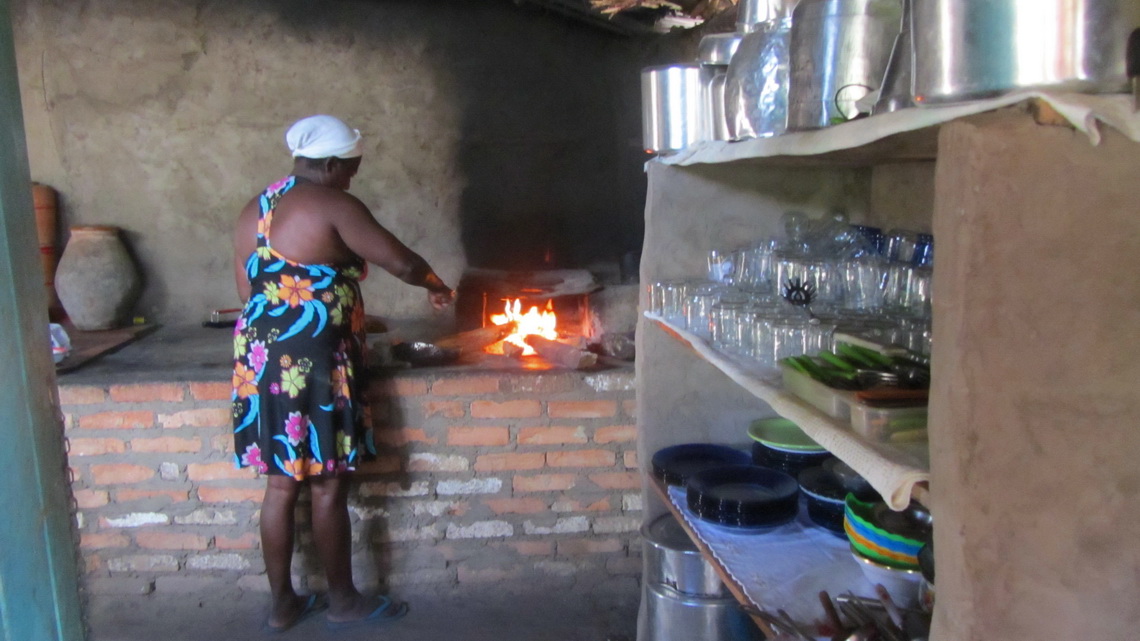 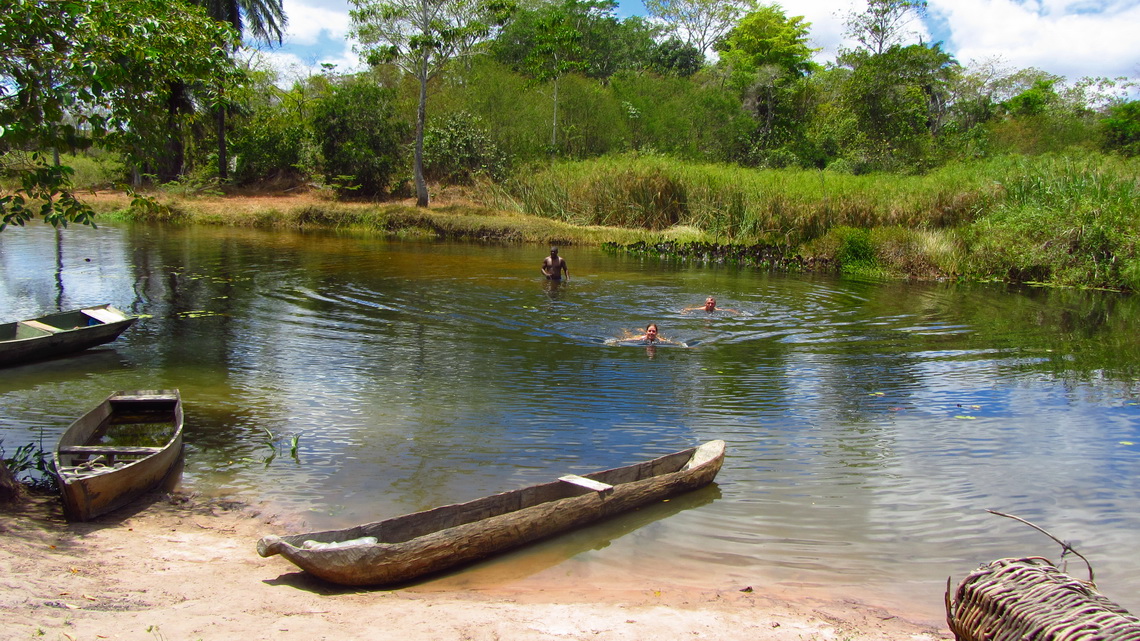 Returning to Remanso was endless and challenging. We had to paddle upstream but Junio did a great job. It was almost dark when we came back to our car. Junio forced us to stay the evening because there was a celebration including a show with him. Surely it starts at 9:00PM.

Everybody told us that it starts immediately but we had to wait until 11:00PM and we didn't regret it. Most of the men, old and young, and some girls were dressed as seamen. They played a tale of the gruel shipment of their ancestors to Brazil. We were touched deeply and said farewell to Junio and his family. They did not understand that we left now at midnight because the party now starts really with heavy music. When we drove back in the darkness we met many cars going to this festival.

Back in Lencois we were a little bit sad to say goodbye to Carina but we had to continue to Salvador to meet our cousin Vera in time. October 5th 2012 we had crossed the whole continent in two months: More than 5000 kilometers drive, from Moquegua / Peru to Salvador / Brazil and from the Pacific to the Atlantic Ocean.