The marvelous Condoriri range of the Cordillera Real is close to La Paz nearby the village Estancia Tuni. It is named after its most striking mountain which looks like a Condor seeing from West. It is "just" about 5600 meters high but very difficult to access due to serious technical ice and rock climbing. West of the main peak is the much easier Cerro Austria (5328 meters sea-level) which provides stunning views to nearly the whole range of the Cordillera Real. 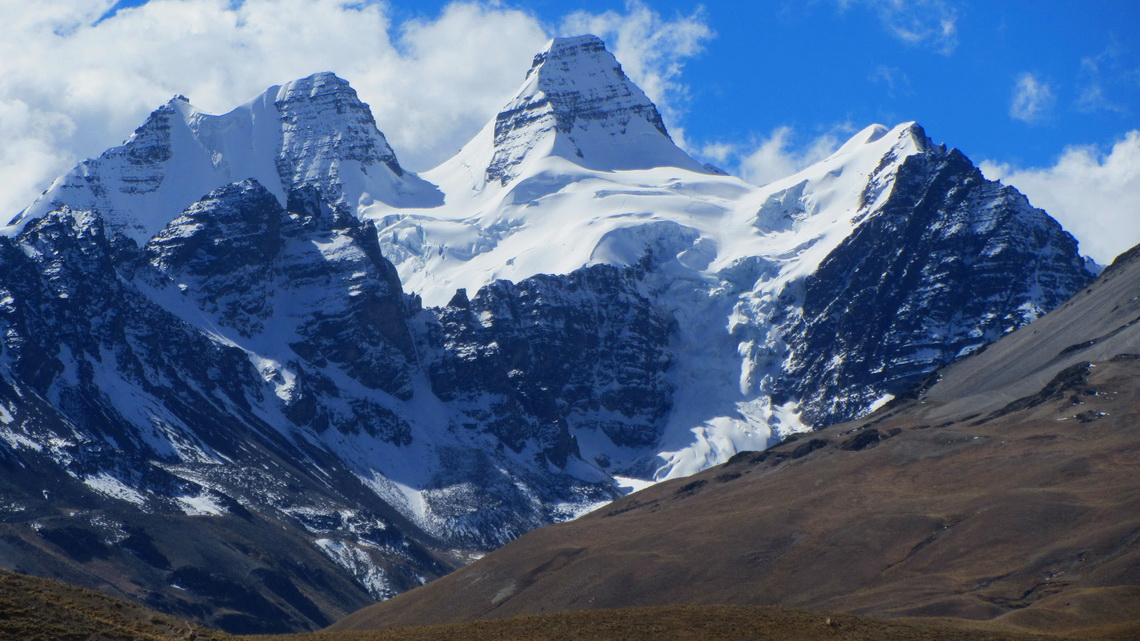 There are other nice trekking mountains in this area like Cerro Mulamania (4949 meters high) and Cerro Thipala (5045 meters sea-level). But before we came in this region we had crossed Bolivia from Tupiza to La Paz. Outstanding were the rocky mountains Cerros Kari Kari close to Potosi.

Like two years ago we strolled a little bit in the interesting little town Tupiza after we had come again to Bolivia on June 29th 2013, see article Volcan Tunupa and Salar de Uyuni. 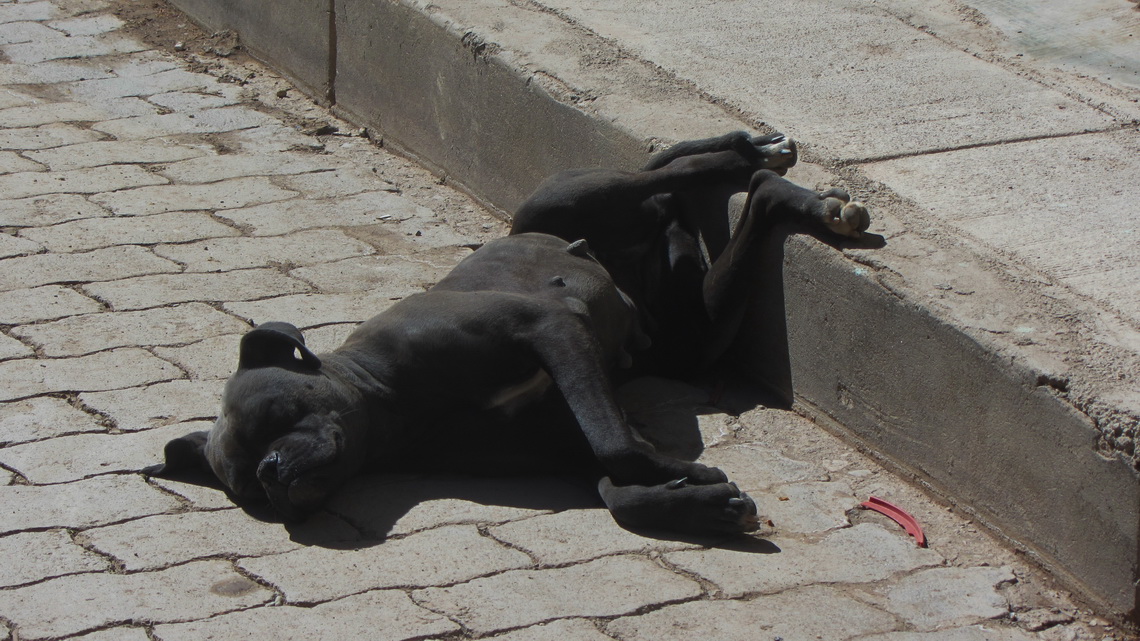 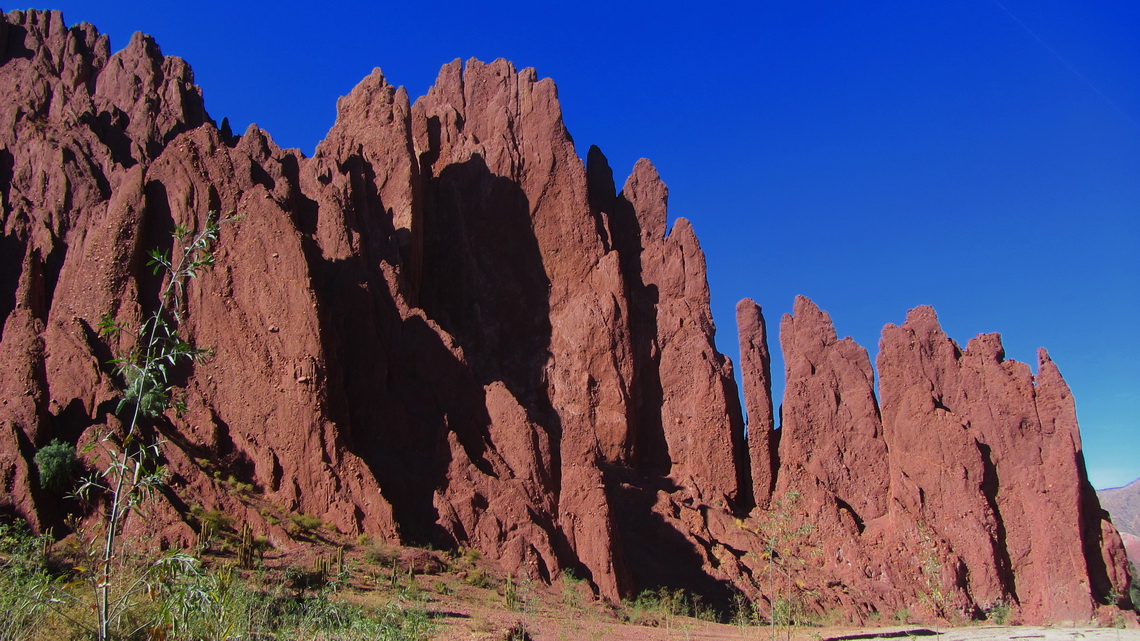 Two years again when we had been also in Potosi (see article From Uyuni to La Paz via Potosi) we had given up searching the lake Laguna San Sebastian, which is the entry point to the Cerros Kari Kari. This time we found it after questioning many people and trying to drive several steep bumpy roads. From the GPS point S19 37.199 W65 44.194 of the main road to Tupiza we took the dirt road to the lake where we camped two nights on a bifurcation with a ruin (GPS coordinates: S19 36.517 W65 44.080) at 4314 meters sea-level . 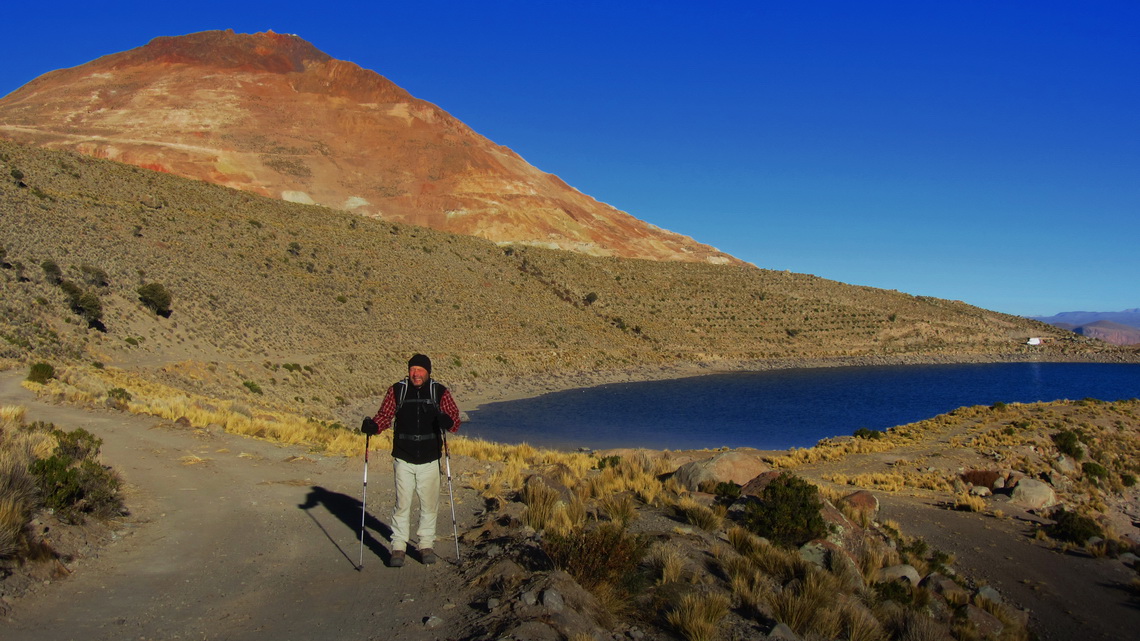 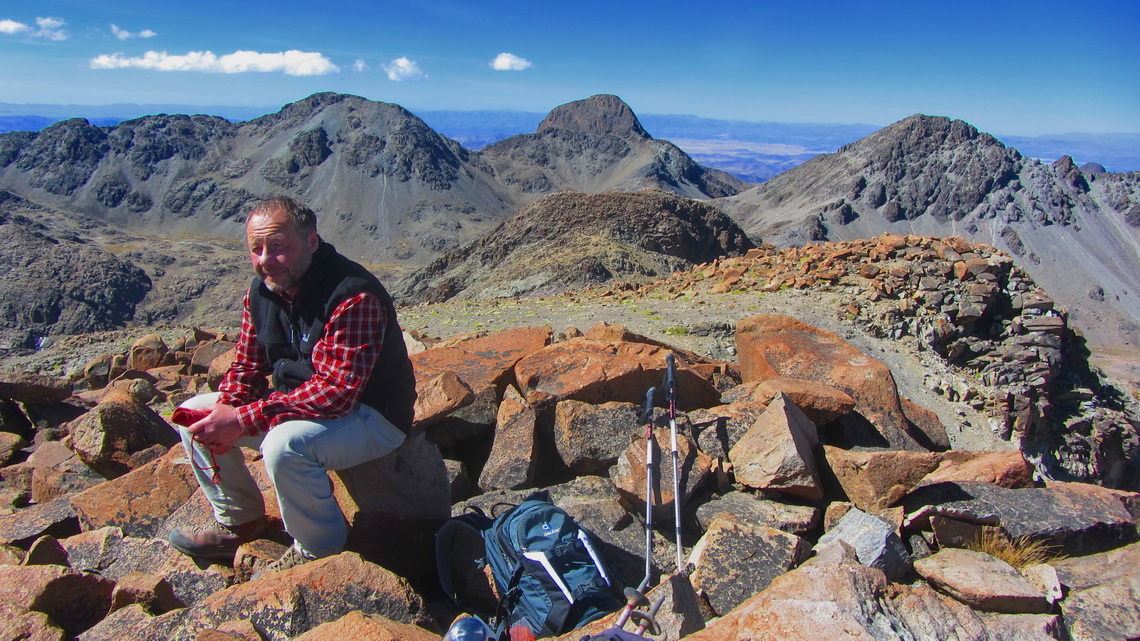 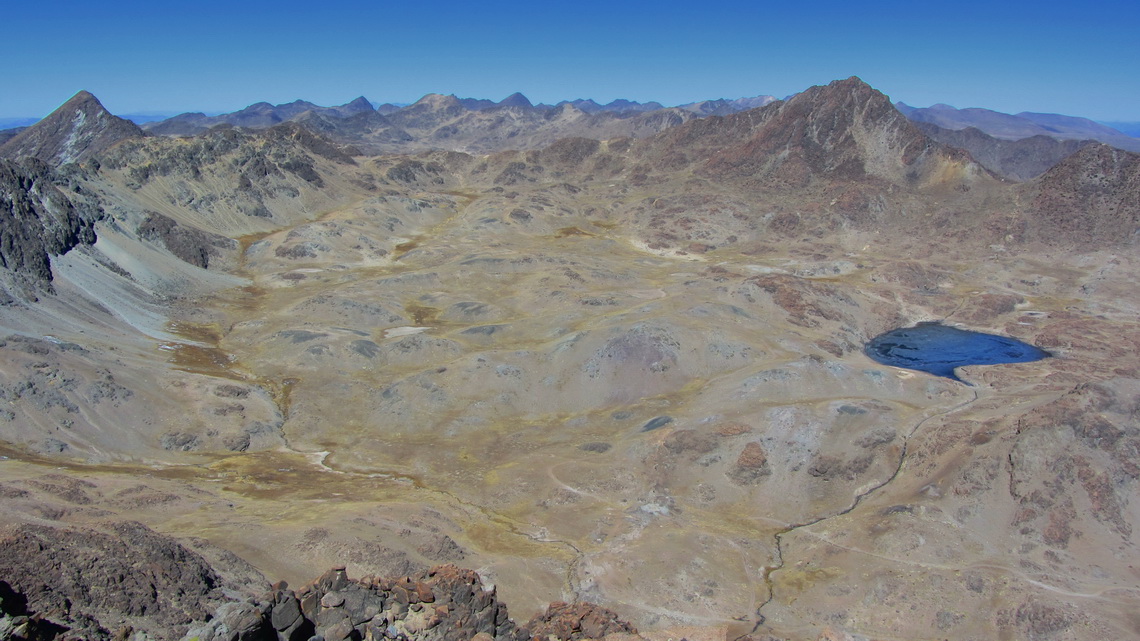 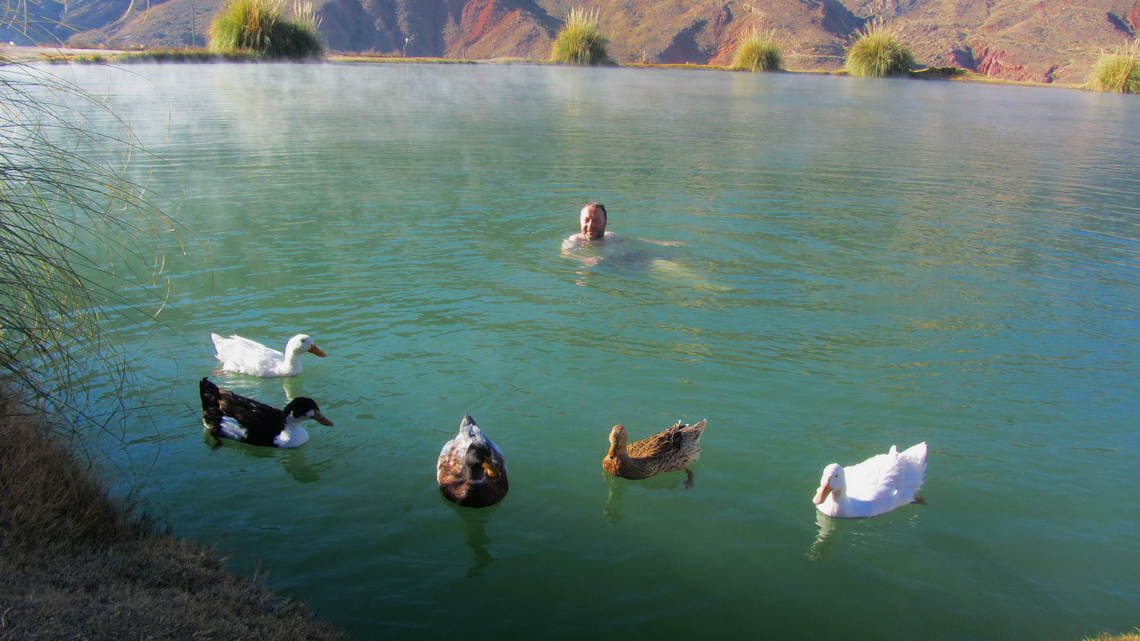 Next we drove a paved road through a beautiful Andean landscape to Sucre, the official capital of Bolivia. Sucre is a convenient town with many green places and interesting museums. Our maps show a direct street from Sucre to La Paz via Oruro but all people recommended us to go back to Potosi because this street is under construction. Again we jumped into Laguna Tarapaya. 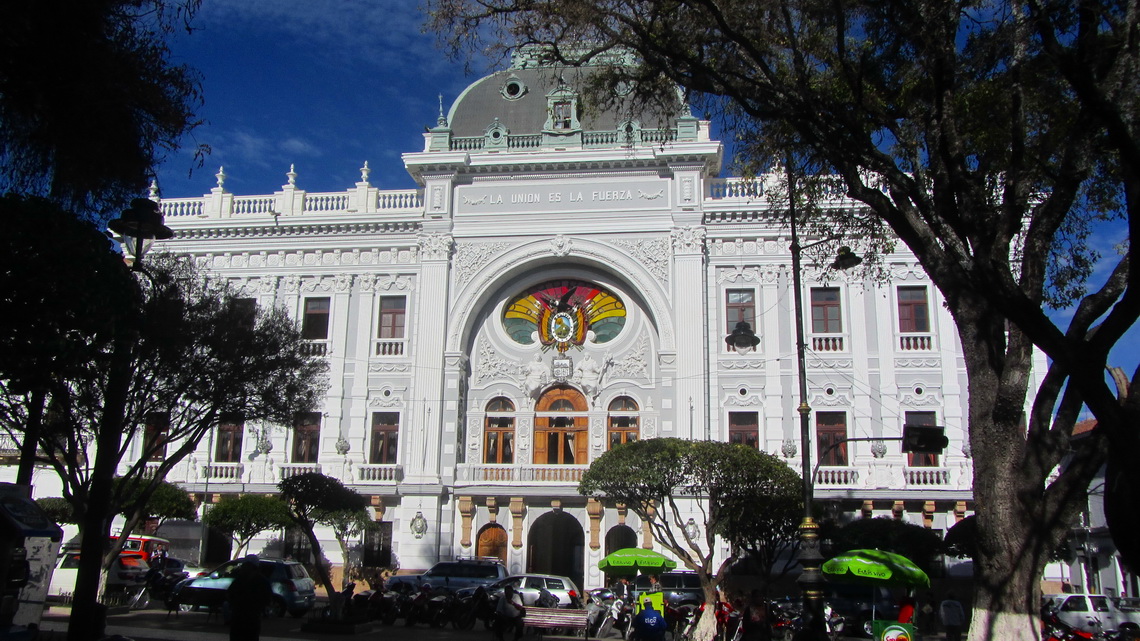 In La Paz we stayed on the campsite of the famous Hotel Oberland, see article From Uyuni to La Paz via Potosi (GPS coordinates: S16° 34.072' W68° 05.351'). We arrived there on Sunday afternoon and enjoyed the life in the nearby parks including the zoo. 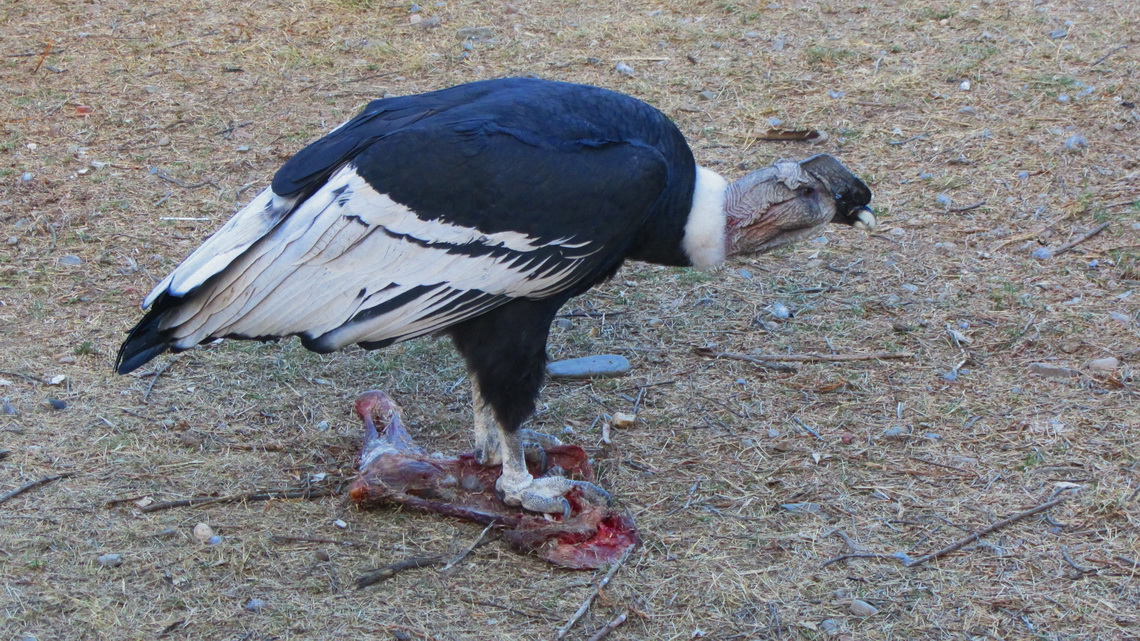 We were very lucky when we were searching a campsite in Estancia Tuni. After passing the village the street to the more than 4400 meters high lake Laguna Tuni was locked. A man run down from a huge building on its shore. He opened the gate and allowed us to stay in front of this edifice (GPS coordinates:  S16 14.849 W68 14.528). It turned out that the man - Simon was a caretaker of the water for La Paz. We were grateful that our car was in his hands when we hiked in the mountains - Thank you so much, Simon. 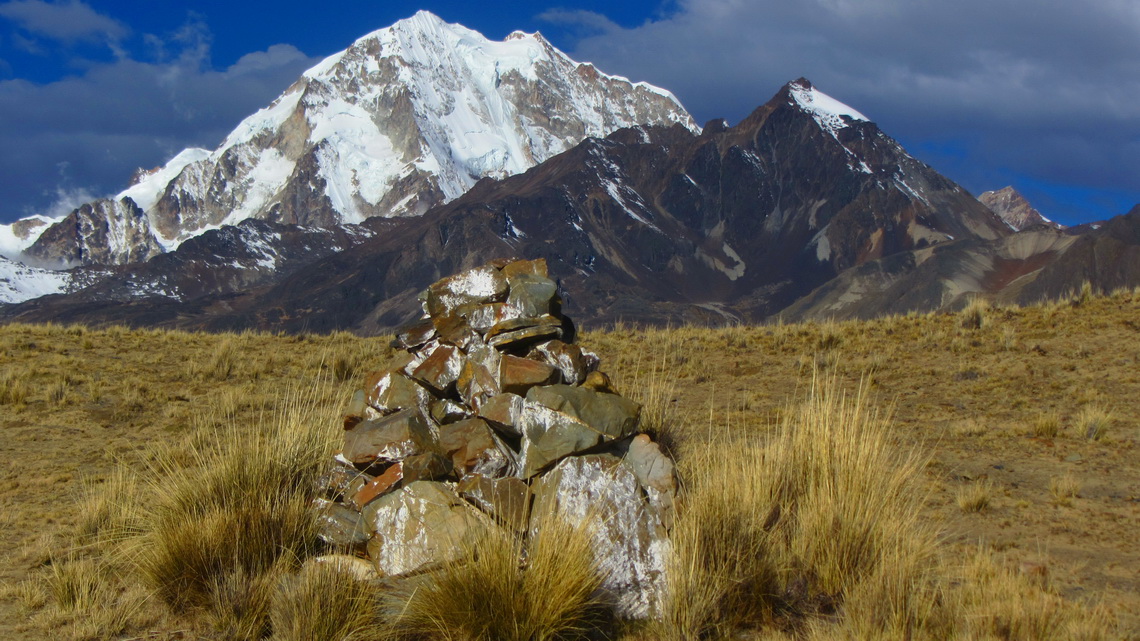 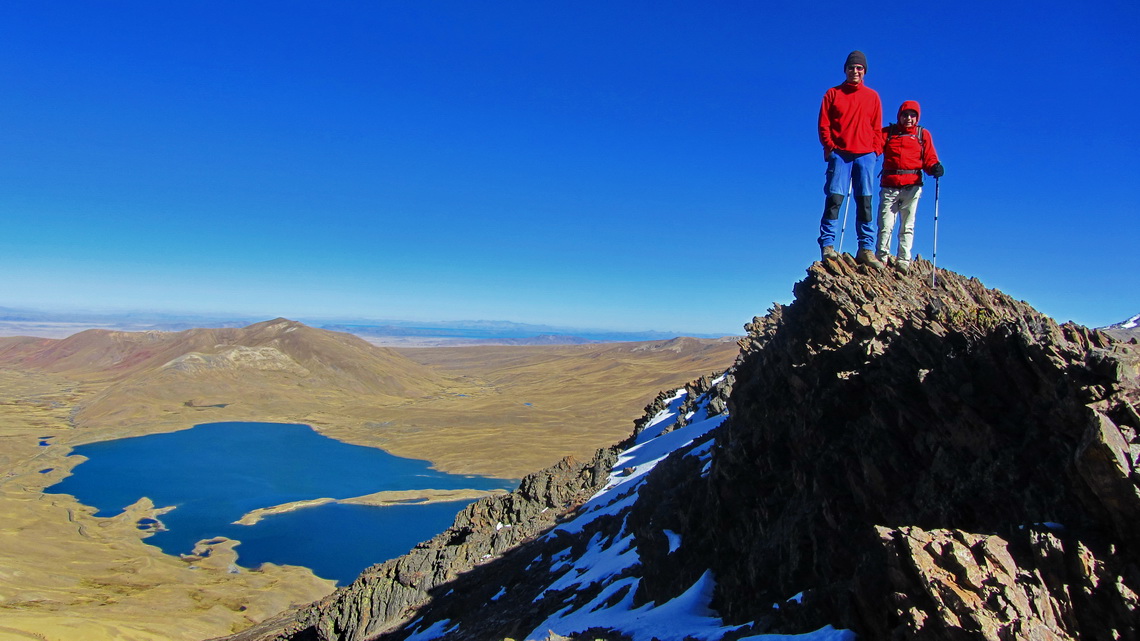 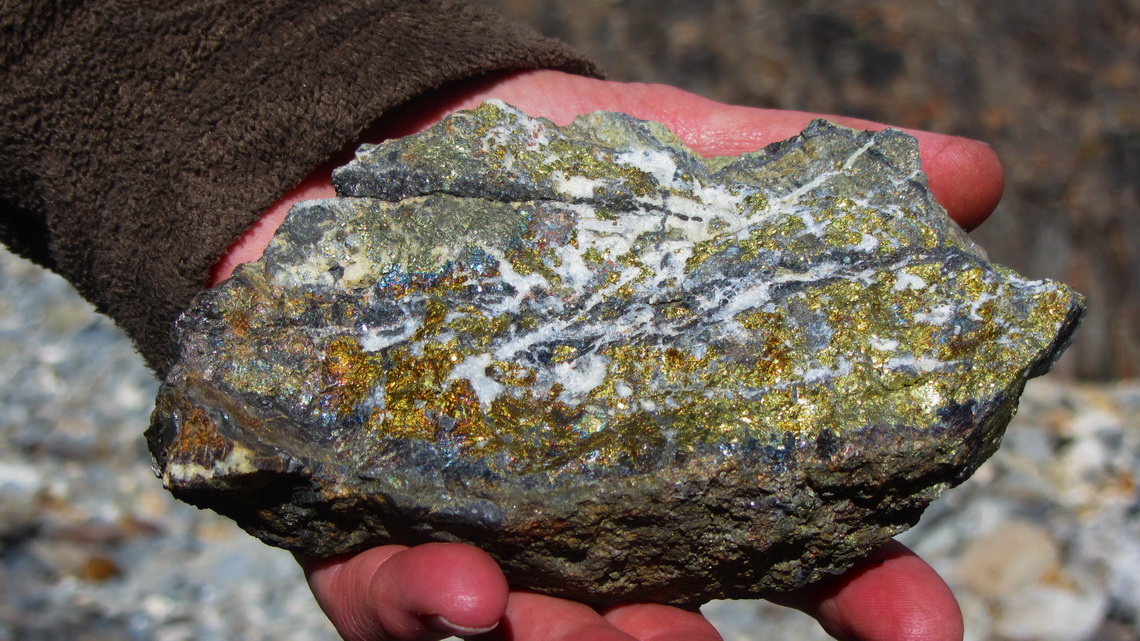 It is recommended to stay one night in te Condoriri base camp on Laguna Chiar Khota (GPS coordinates: S16 11.624 W68 14.390) for climbing Cerro Austria. Thus we took our tent and hiked the valley North of Laguna Tuni to the camp where we met some first class climbers. 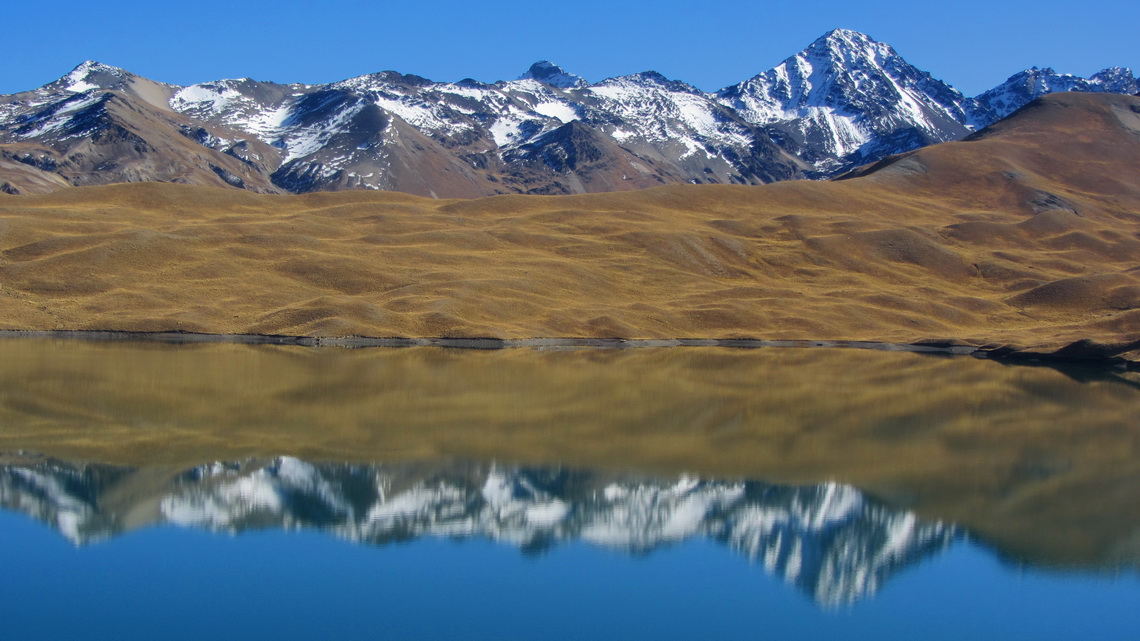 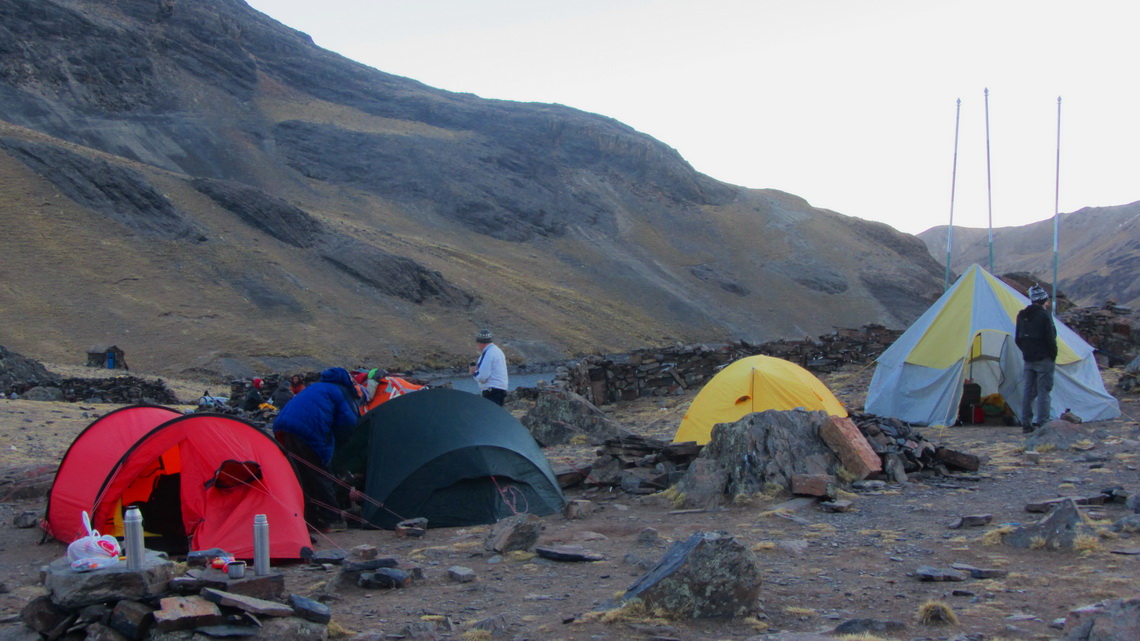 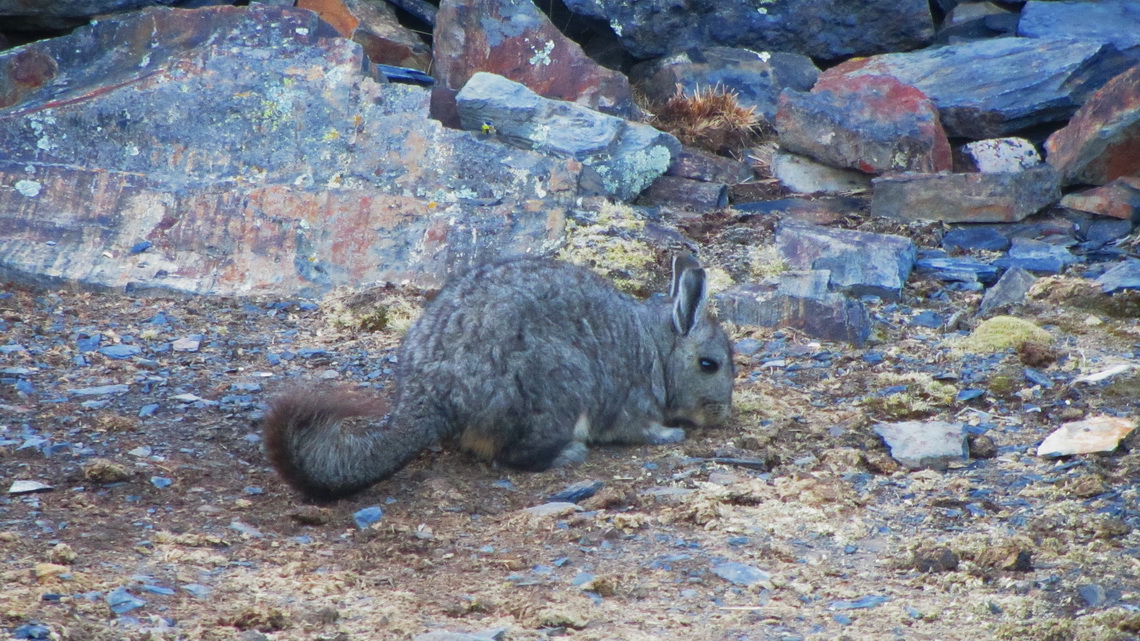 A good trail leads in three to four hour to the 5328 meters high summit of Cerro Austria (GPS coordinates: S16 11.406 W68 15.455). From its top nearly the whole range of Cordillera Real can be seen - from its two tallest peaks Illimani (southern end) to Ancohuma (northern end). 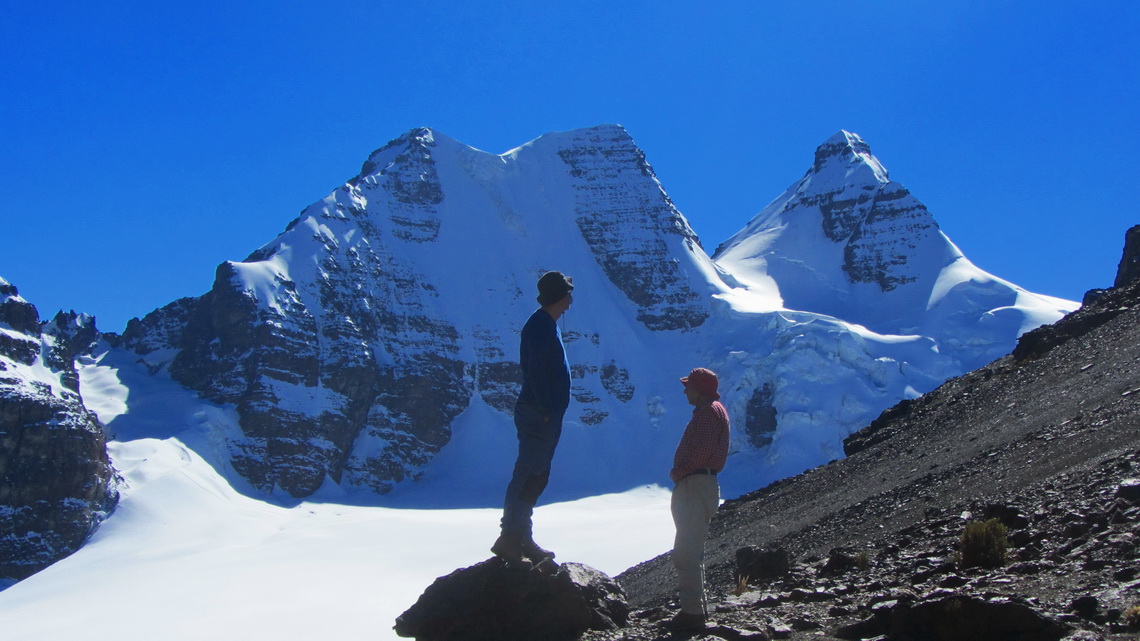 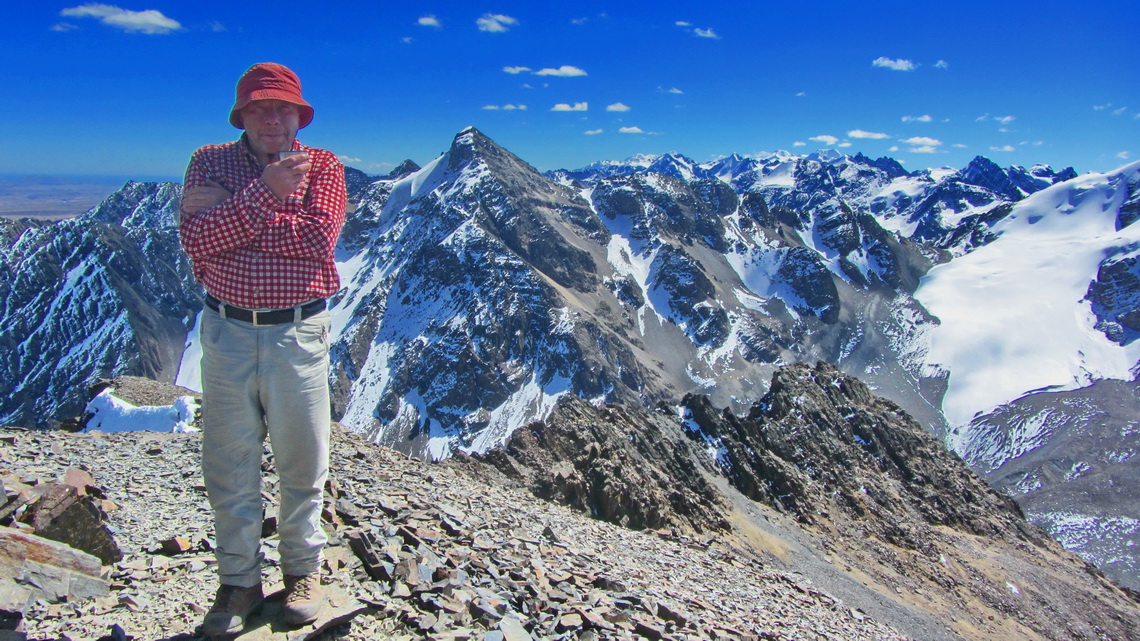