Machu Picchu is probably the most famous tourist destination in South America. The mystic Inca site is located isolated on the eastern slope of the Andes in a marvelous and nearly tropical environment. Its buildings are in very good conditions. Thus life of the Incas can be imagined well besides thousands of visitors every day. In addition it shows the fabulous engineering and construction capabilities of the Incas. 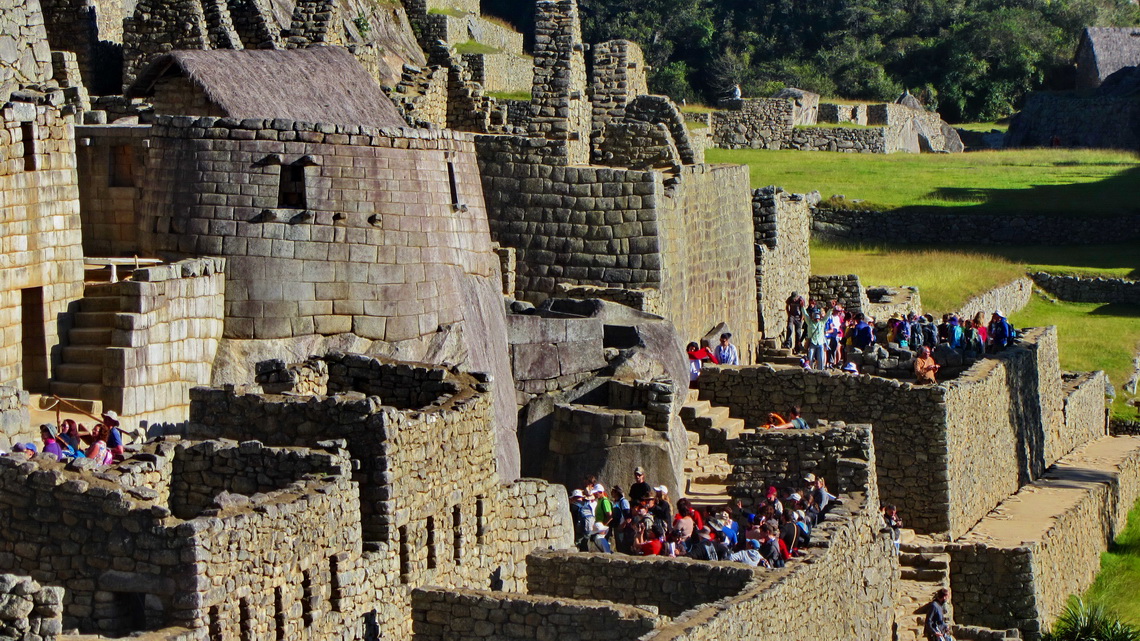 But Machu Picchu is not the only historical site of the Incas in southern Peru. Cusco was the navel and center of the Inca world. Today the city with more than 300,000 people is the major hub for tourists in Peru but also here you can feel former Inca life. Close to the town is the Inca fortress Saqsaywaman, on the way to Machu Picchu in the sacred valley are Ollantaytambo and Pisaq.

After crossing the Bolivian border we traveled along the western shore of lake Titicaca. The main city Puno is famous for its festivals and the floating islands on the lake Titicaca, established and inhabited by the indigenous Uro people. Nearby are Chullpas, large tomb towers put up by the pre Inca culture Colla for their important people. Later the Incas used and enhanced their Chullpas. 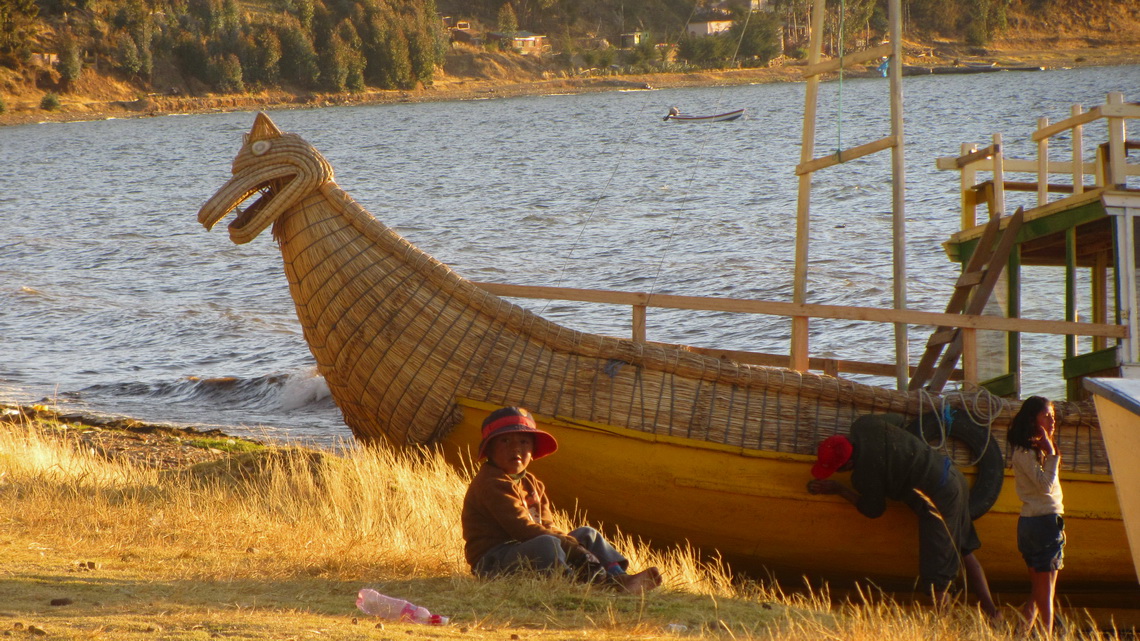 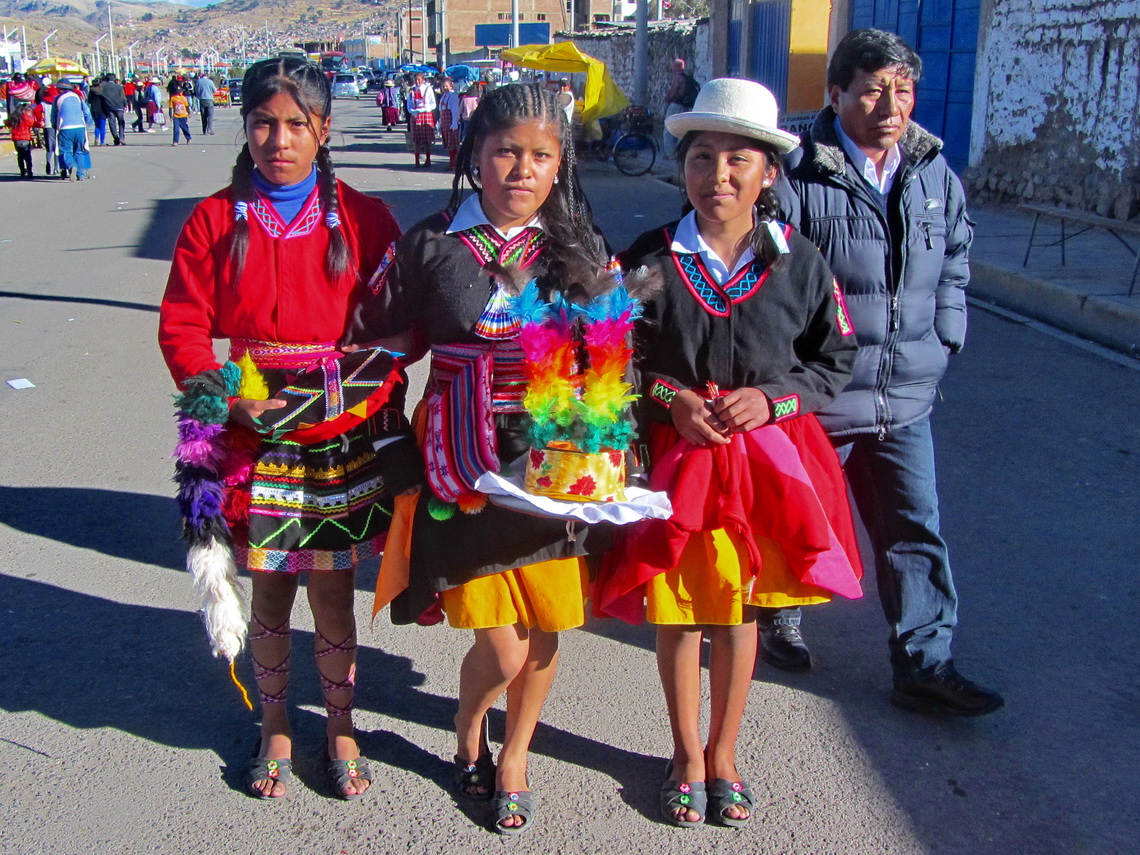 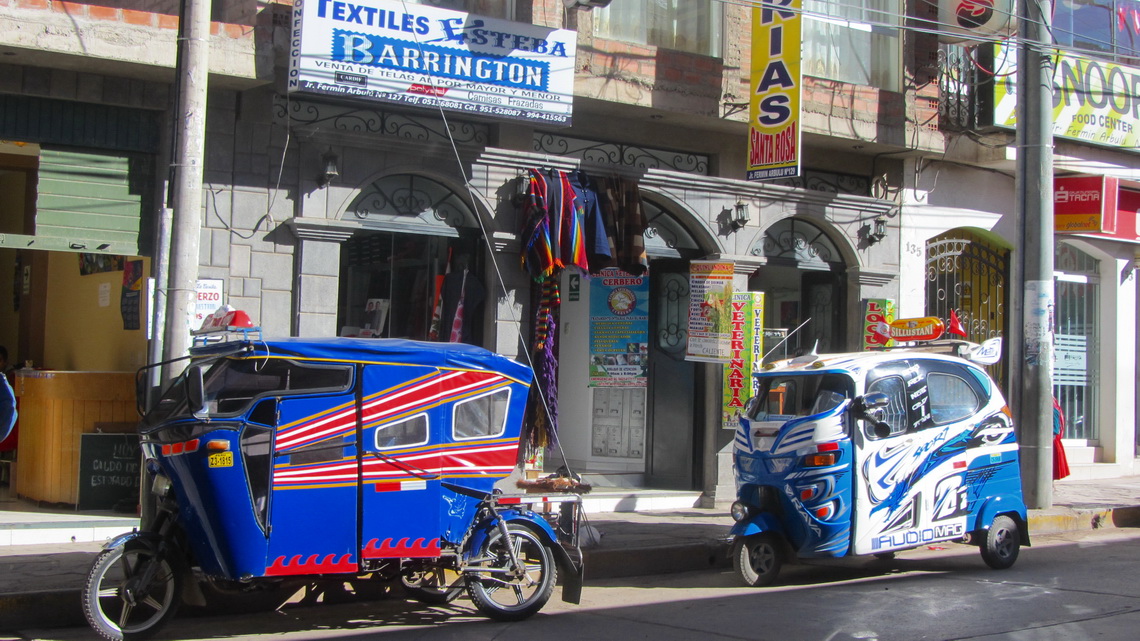 The Chullpa site of Cutimbo is touching. The main towers are placed on a 150 meter high table mountain. When an important man died 20 to 30 his wives, children, servants and 20 to 30 Llamas were burnt that they could serve him after his dead. Sometimes more people were locked up alive in the towers. Unfortunately grave robbers damaged most of the Chullpas and stole precious items and mummies. 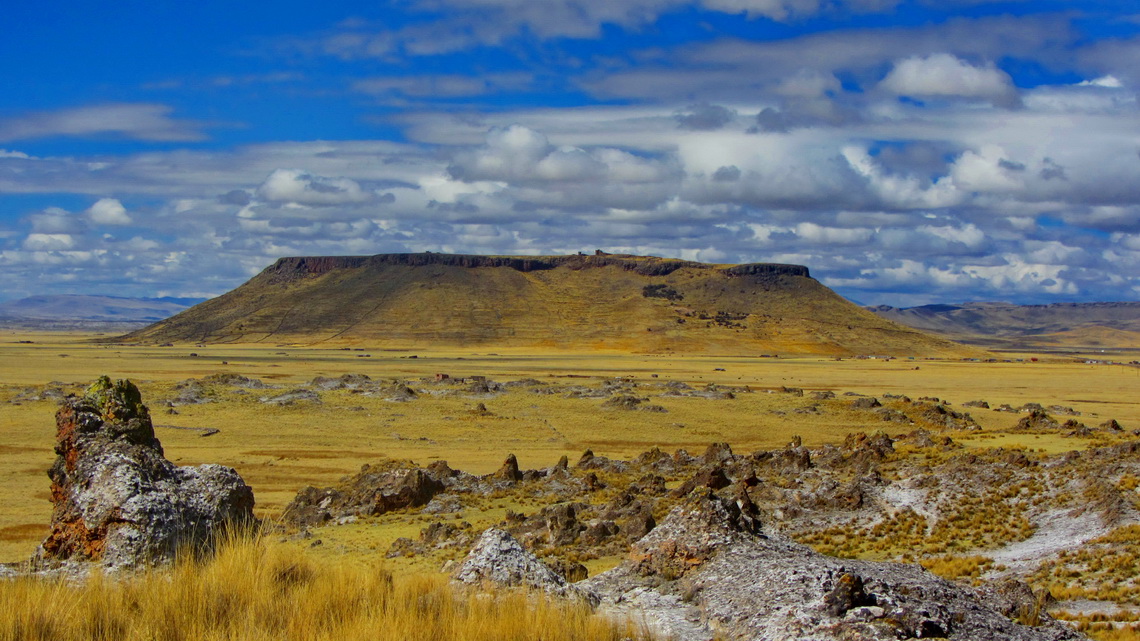 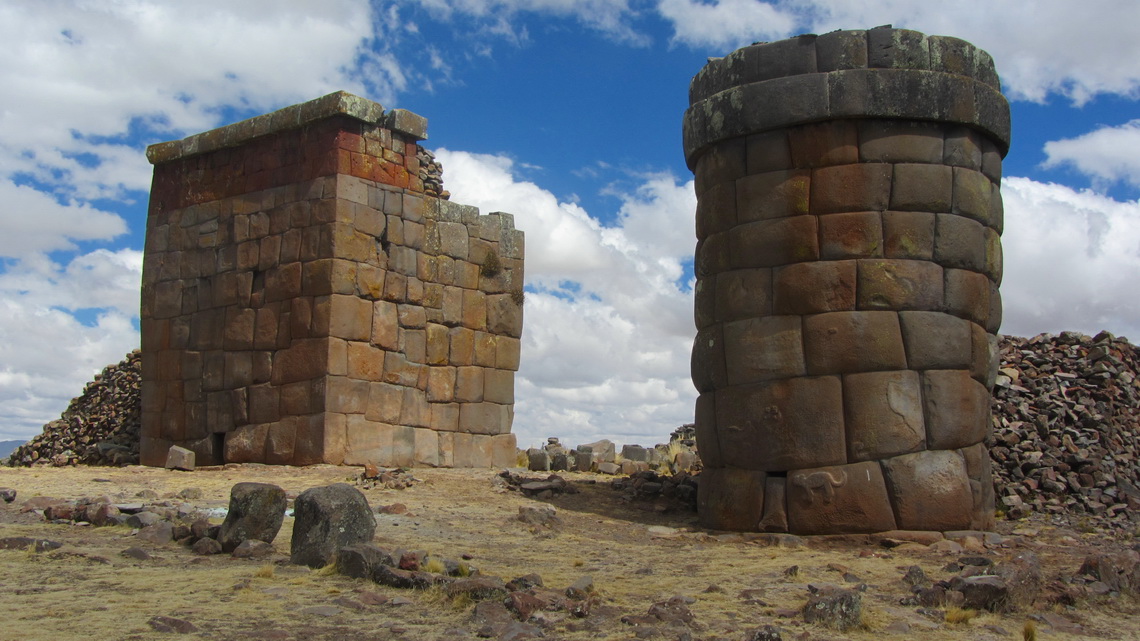 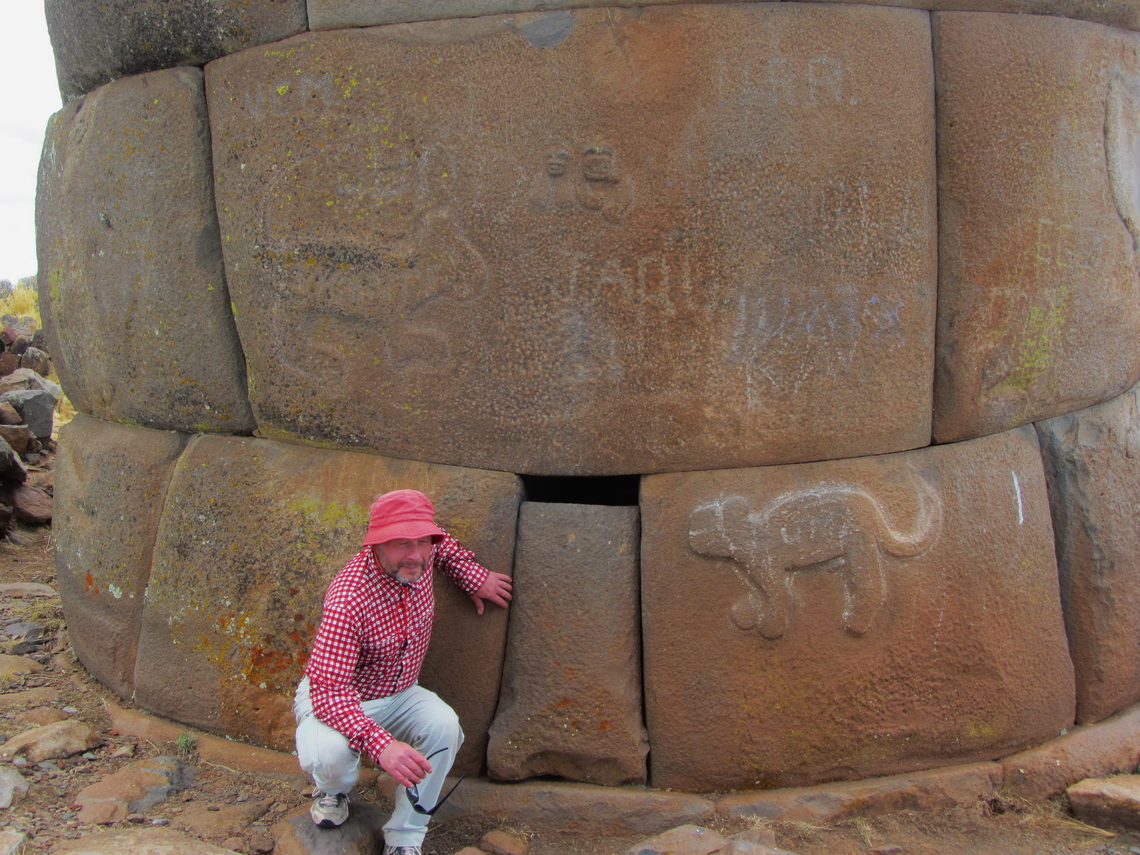 In the northern area below the table mountain are simpler Chullpas of less important people, where we strolled around.

A boat trip to the floating islands is a must to do in Puno. These islands are made with reeds and must be renewed approximately every 6 months because the reeds soak water and the island sinks. Thus they are relatively small just for few families. But they have also a school, parish hall and a medical station, accessible by the typical Uro boat also made with reeds. The Uro people embraced us literally and invited us to their homes. Of course we had to deal with some souvenirs. But we played a lot with the kids and had much fun all together despite the cold in the late afternoon and evening. 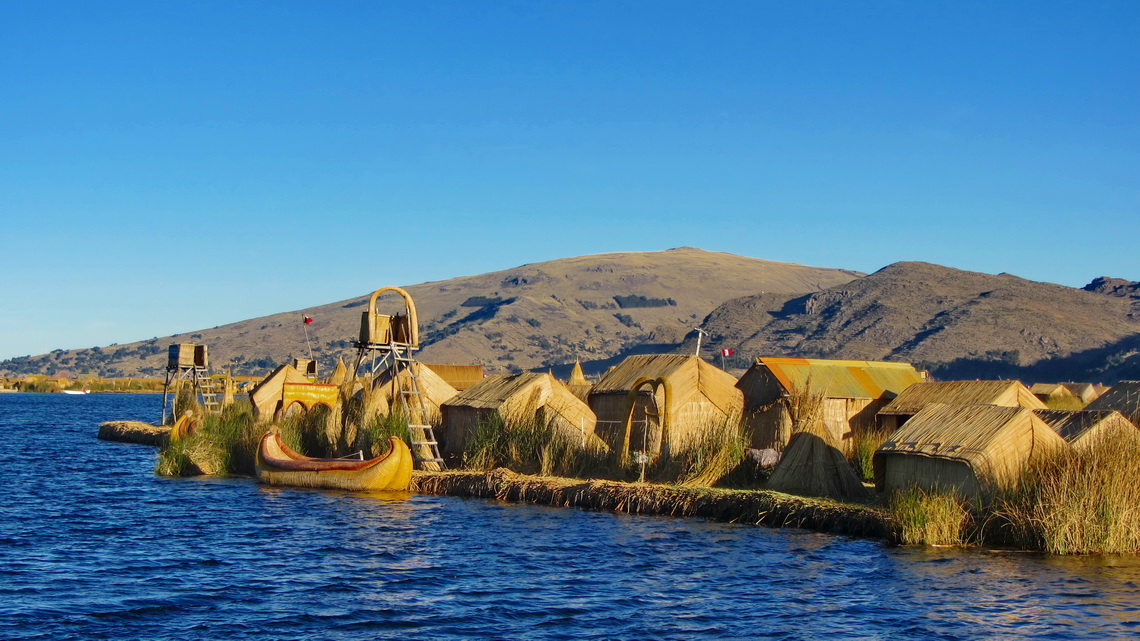 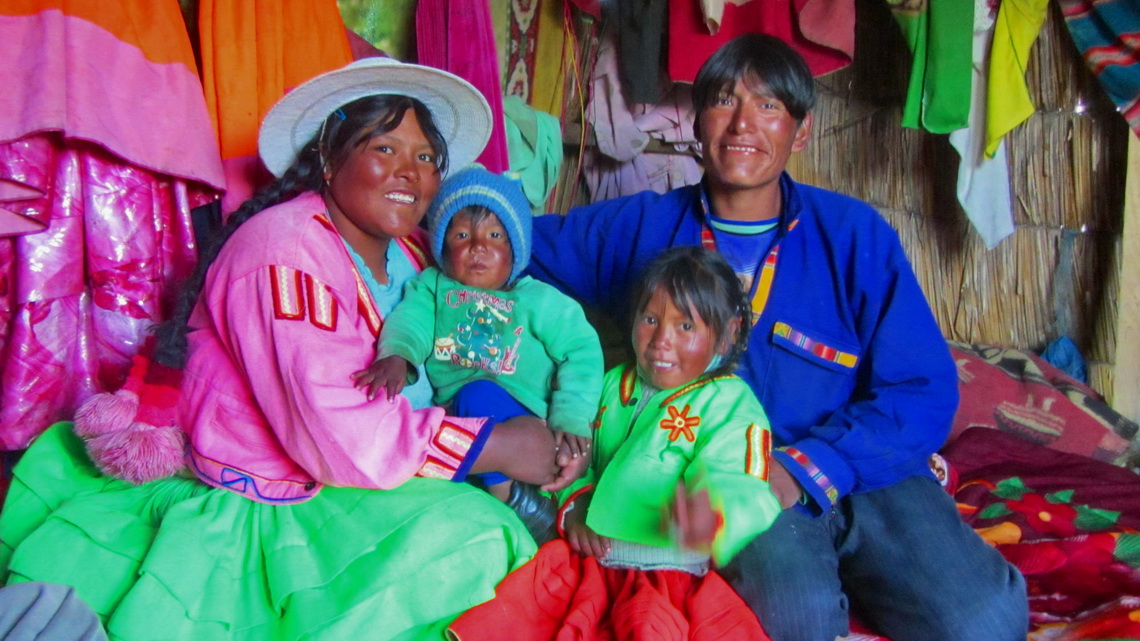 Between Puno and Cusco is the 4338 meters high pass Abra La Raya, the northern end of the Altiplano, the roof of South America. Few kilometers North are the hot springs Aguas Calientes with reasonable facilities. 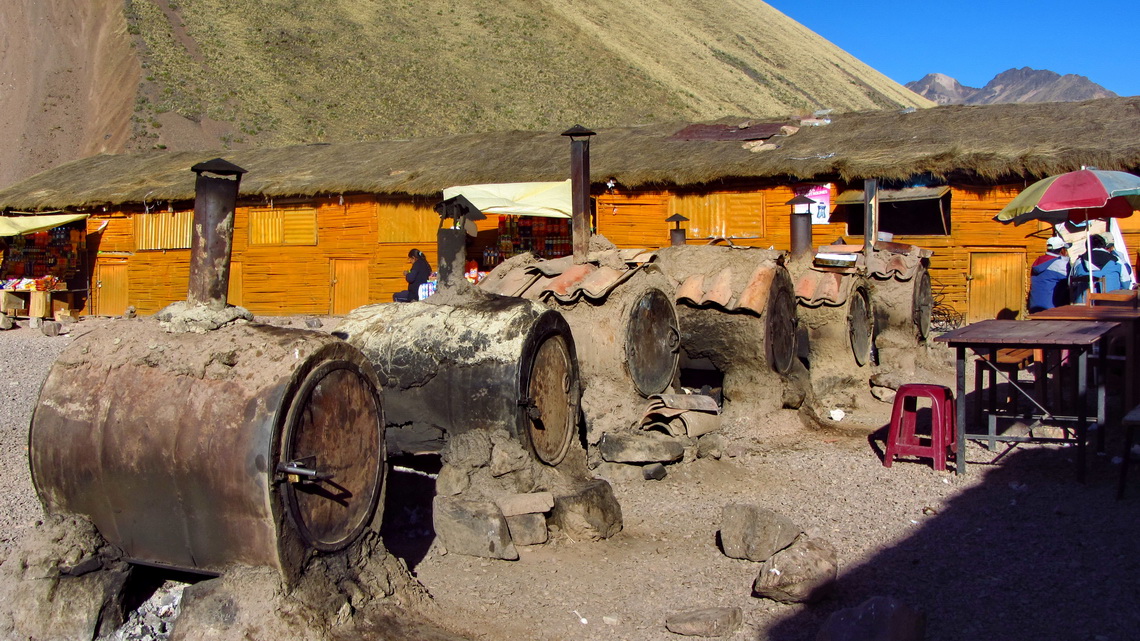 Cusco was the capital of the Inca empire and most important city of South America when the Spaniards conquered it in the year 1533 without any battle. But they refused to use it as their capital because they need a port. Thus they founded Lima, which was their headquarter in America. Today Cusco is a bustling city with many traditions and tourists. Still it is the spiritual center of the Quechua people in South America with a university where the language Quechua can be studied. It has many churches, most of them are built on Inca walls.

In Cusco we purchased the ticket Boleto Turistico which is valid for 10 days and for most of the attractions in and around town. It includes a worth seeing dancing show in the Centro Qosqo de Arte Nativo in the evening. 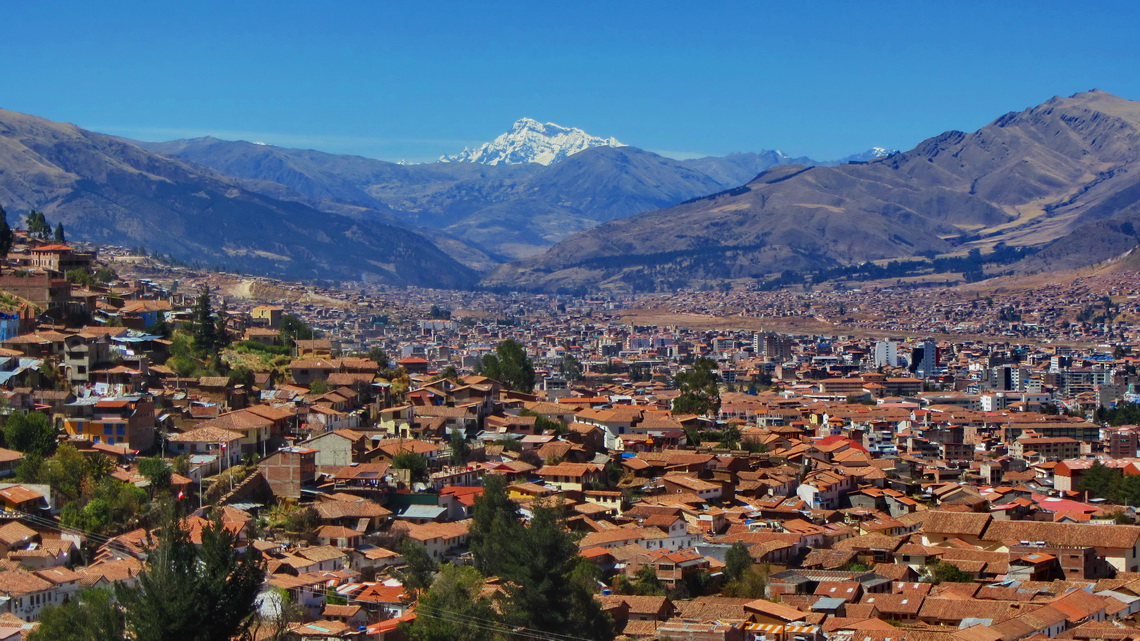 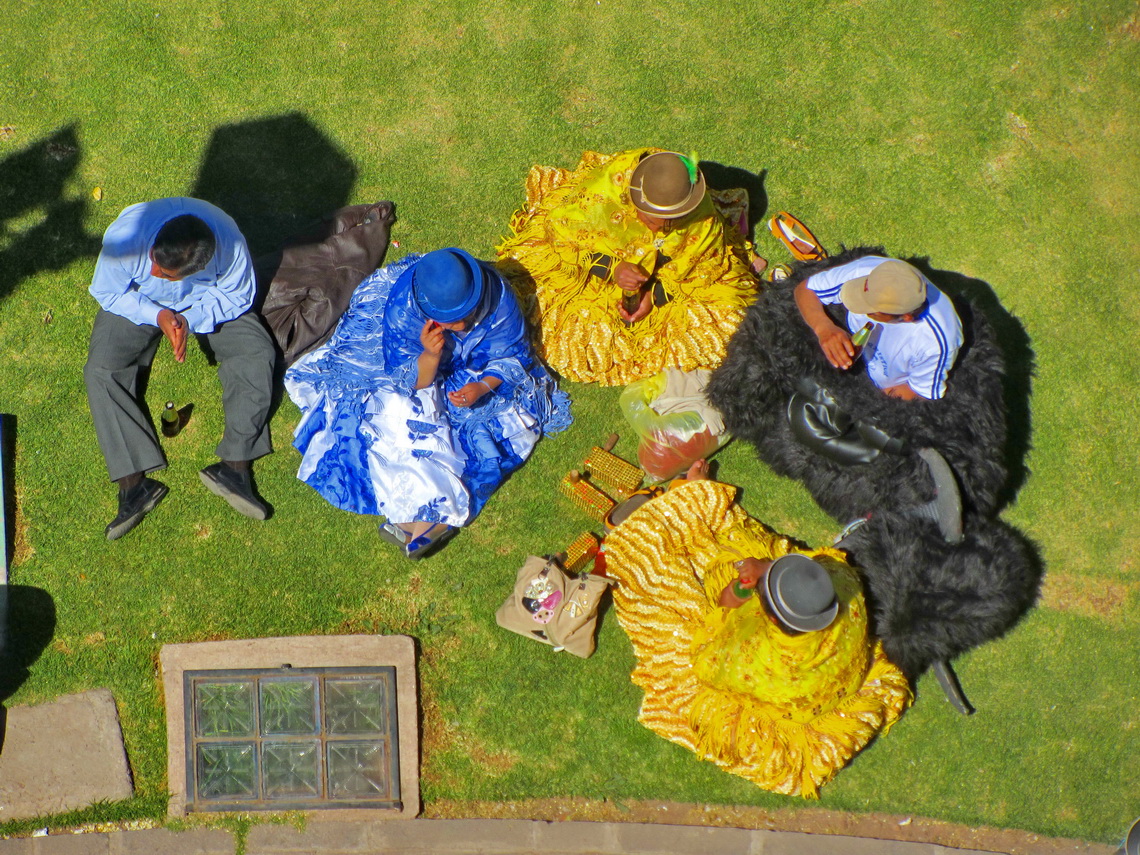 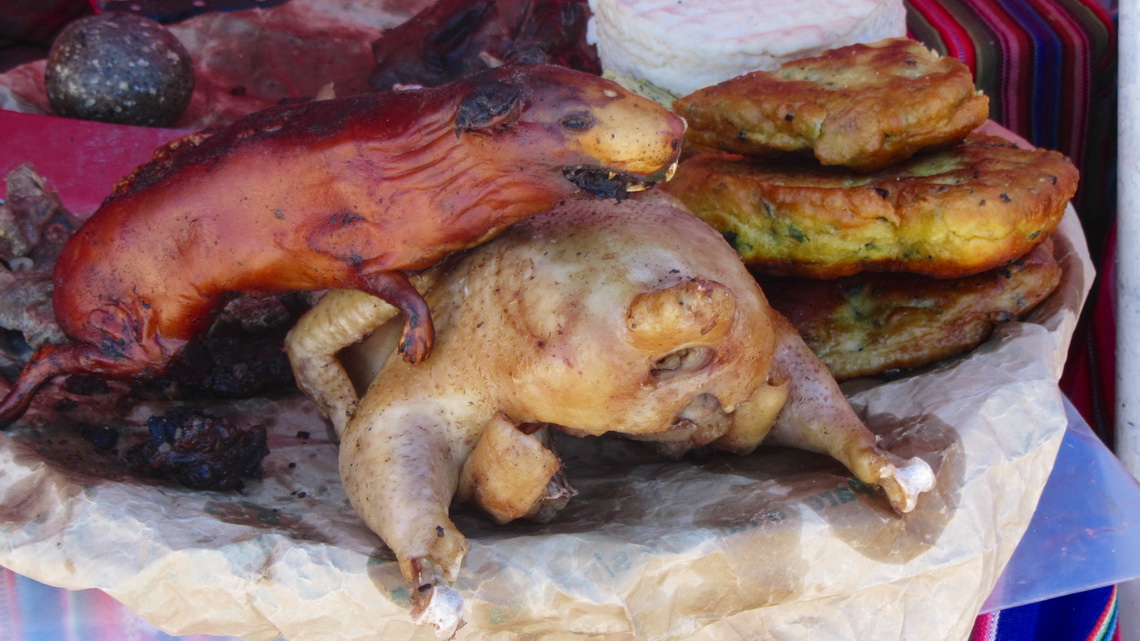 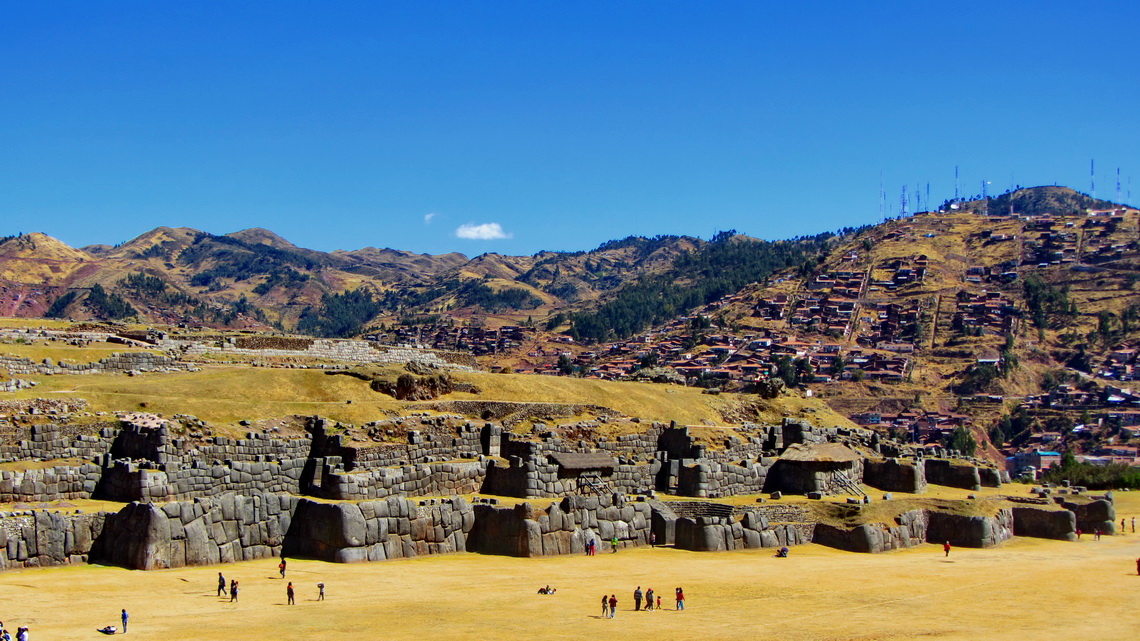 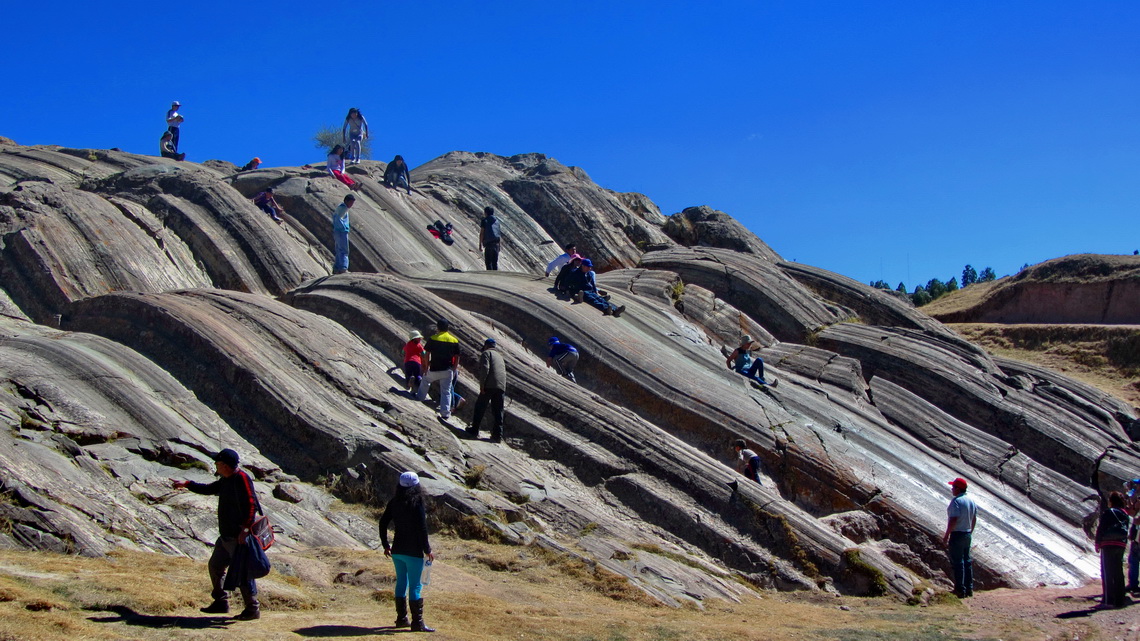 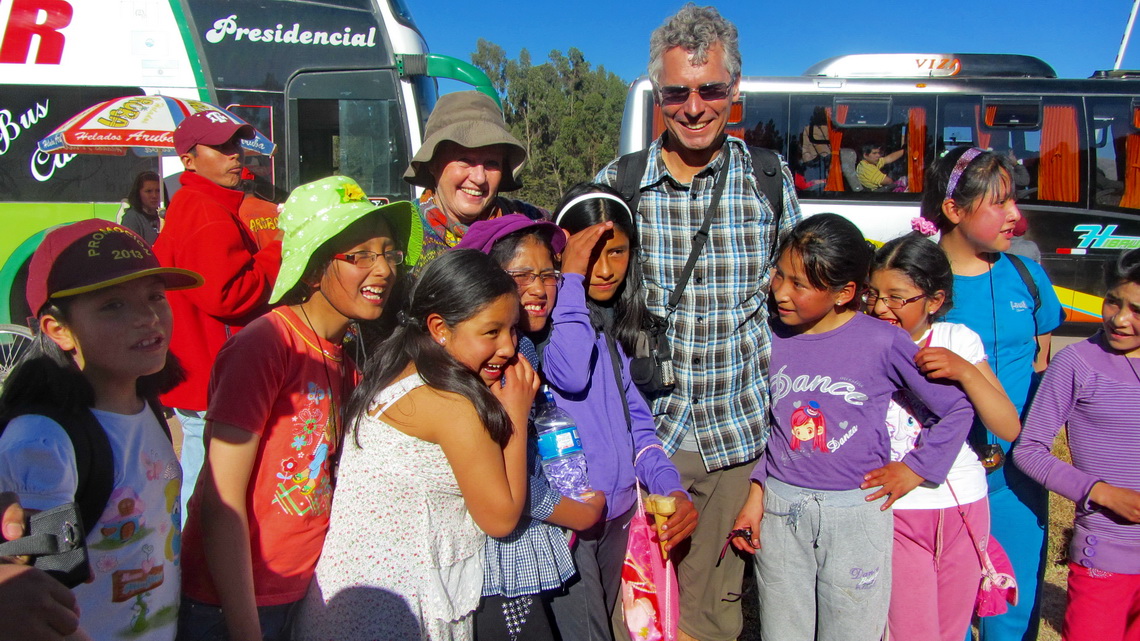 Cusco has the very good campsite Quinta Lala (GPS coordinates: S 13°30.346' W 71°59.091') managed by a girl from Guatemala. She provides all information how to go to Machu Picchu, also without using the very expensive train. But for us getting the tickets for Machu Picchu was a little bit a challenge. There is a ticket office in Cusco but it was closed because the Peruvian celebrated their national holidays four days! So we made a reservation in the Internet in the evening and wanted to pay. The system refused our request and stopped talking to us after we had tried it several time. According to this website it is possible to pay on other offices in the town like the railway ticket office. Next day we went there and got a number. We waited more than three hours until we were asked to a counter. The man told us that the system doesn't work at the moment and he can do nothing for us. Besides our reservation expired and we have to do another one. Maybe the system works later.

We headed to an Internet cafe and did the painful process of reservation again. You have to insert your full passport data including the birth name of your mother. Close to the lunch break we returned to the railway office. Again we had to fetch a number and wait. This time we had more luck when we were asked to the counter. The Lady told us the system works again but when we wanted to pay she refused our Peruvian money. Only U$ or credit cards are accepted, both with horrible fees. Mastercard didn't work, but finally with VISA we received our tickets for Machu Picchu including the permit to climb up Cerro Machu Picchu which cost some additional money, of course.

But we had to overcome some other obstacles to see Machu Picchu. Firstly we drove the direct route into the upper Sacred Valley of Rio Urubamba with some interesting places to see. 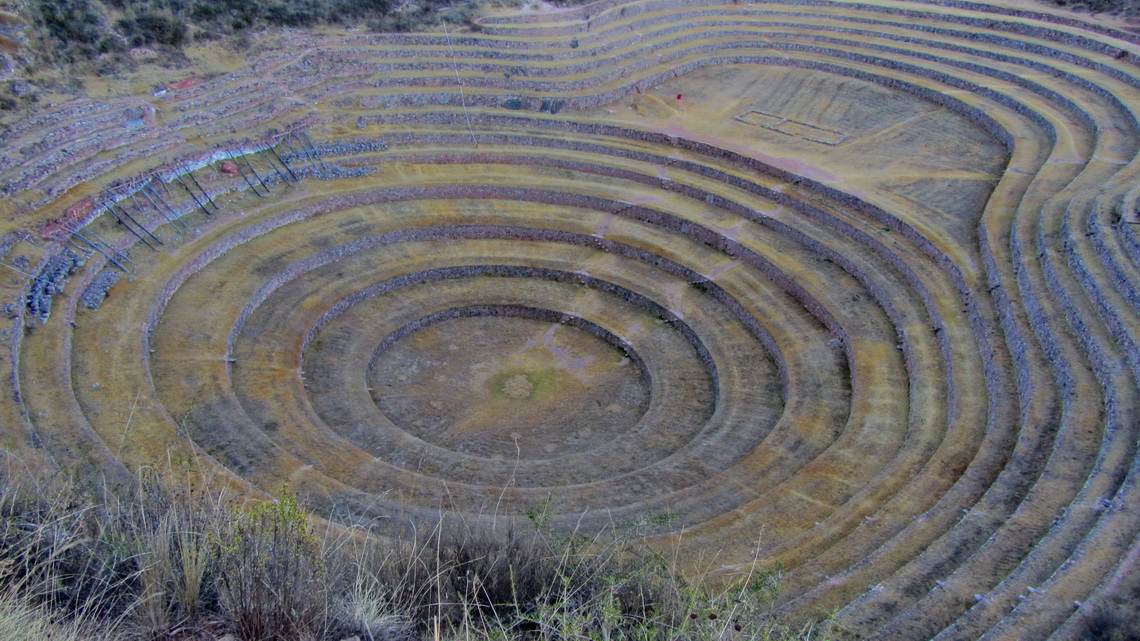 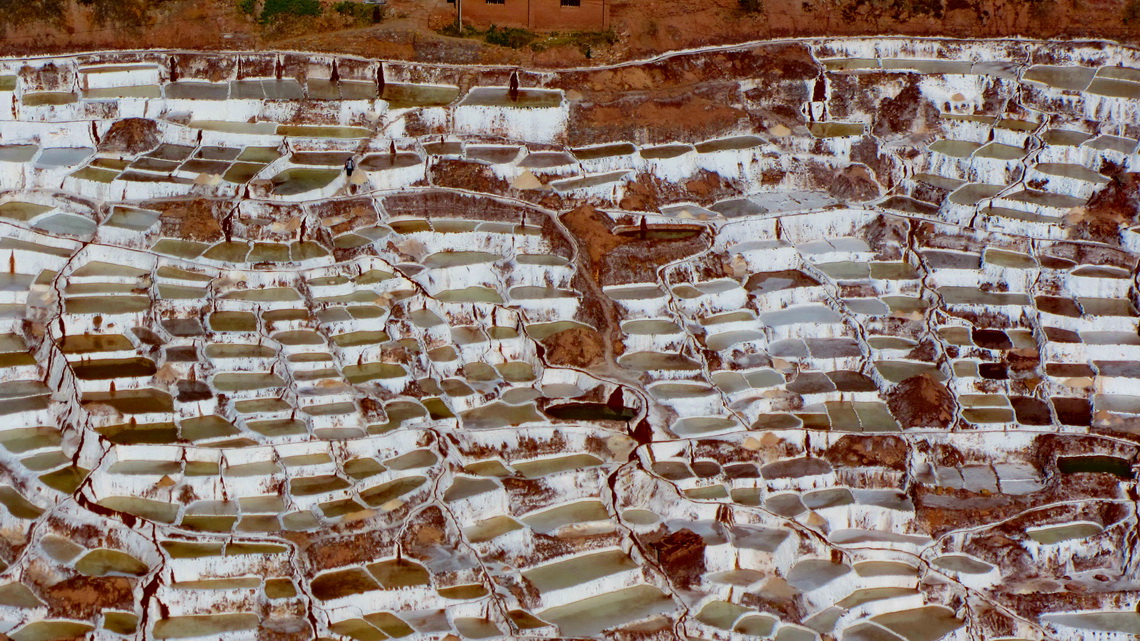 The gorge between the 2750 meters high Ollanta with its Inca fortress Ollantaytambo and Aguas Caliente, the Machu Picchu village in the Rio Urubamba valley (2000 meters sea-level) is only accessible by the exclusive and expensive train. By car you have to drive up to more than 4200 meters to the Abra Malaga and descend to 1200 meters high Santa Maria. Fortunately the street is fully paved and in excellent condition. In Santa Teresa you meet Rio Urubamba, again. The next 20 kilometers upstream to Santa Teresa are horrible: A narrow dust road hit into a nearly vertical wall. If you have oncoming traffic you are in the shit. If it is a truck the shit is very deep. We had to deal with several minivans, fully packed with people and few trucks! Not recomended if someone has not extremely strong nerves! 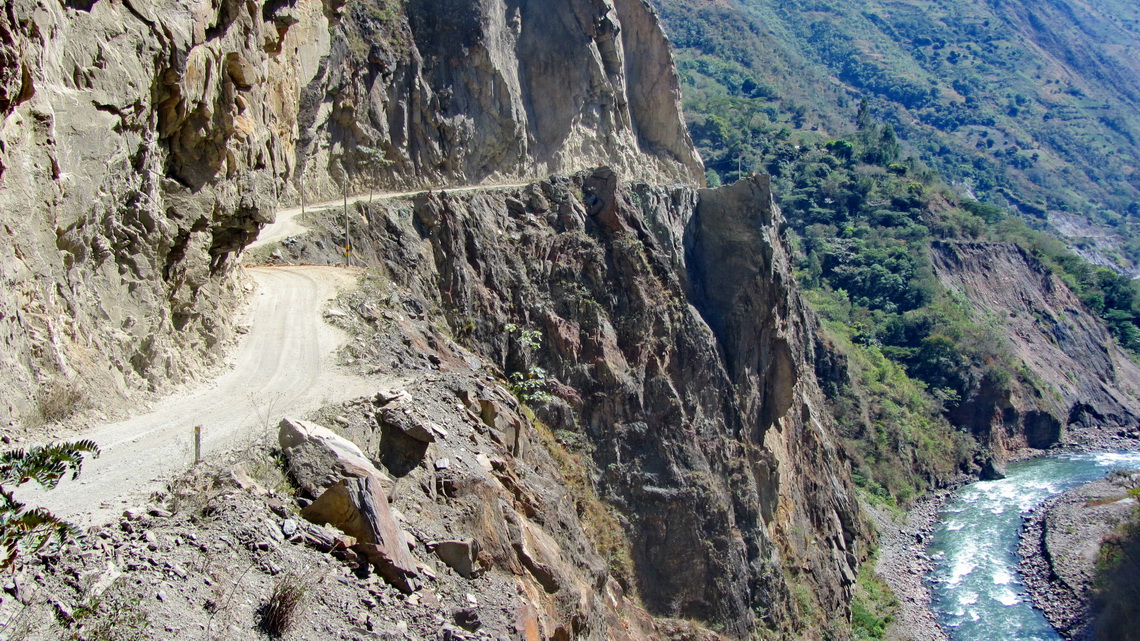 Thanks to the Lady on the campsite in Cusco we found the good campsite Genaro Moscoso (GPS coordinates: S 13°07.903' W 72°35.781') with nice people. We could park our car there free of charge! On the next day we took a minivan to Hydroelectrica, also on an exciting road. The 3 to 4 hours trek upstream Rio Urubamba along the rail is marvelous in a nearly tropical environment. 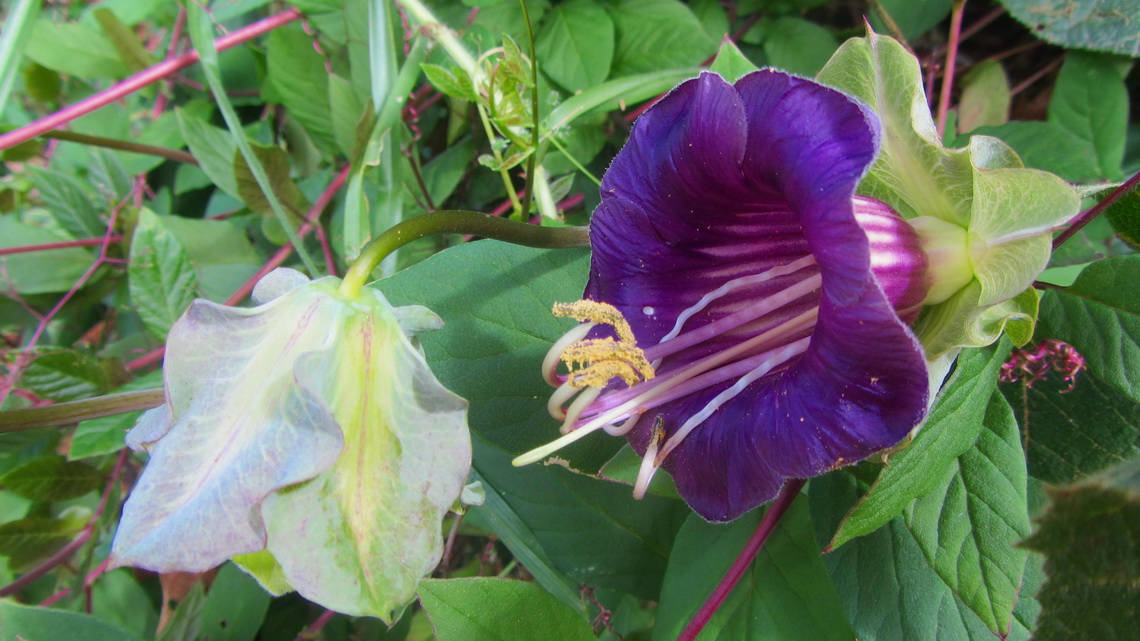 Few meters ahead of Aguas Calientes is a the beautiful campground directly on Rio Urubamba and on the bridge to Machu Picchu (GPS coordinates: S13° 09.725' W72°32.157', 2005 meters sea-level). No further access is allowed in the evening and without tickets. Aguas Calientes consists mainly of hotels and restaurants for tourists but like the name indicates it has hot springs. 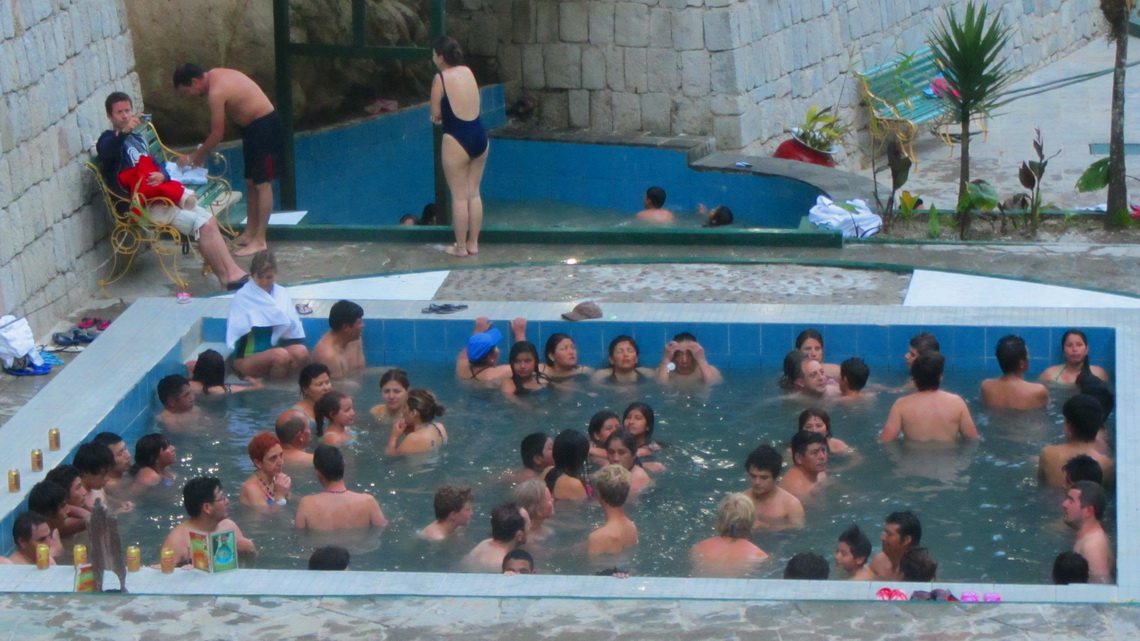 We started early in the morning to walk up approximately one hour to the entrance to Machu Picchu. We did not take the expensive bus. It is really a shame you are in a wonderful environment without any cars but buses are roaring the full day up and down to Machu Picchu. The damage to the landscape is massive, the air is polluted severely. In our eyes a funicular might fit much better and can also be used by footsore tourists.

Nevertheless Machu Picchu is overwhelming. It is a mystic Inca site, 400 years undiscovered, hidden on a saddle in the mountainous junge, located in an incredible marvelous environment with stunning  edifices and places. When most of tourists were gone in the late afternoon you might feel the power, vitality and spirit of the Incas. 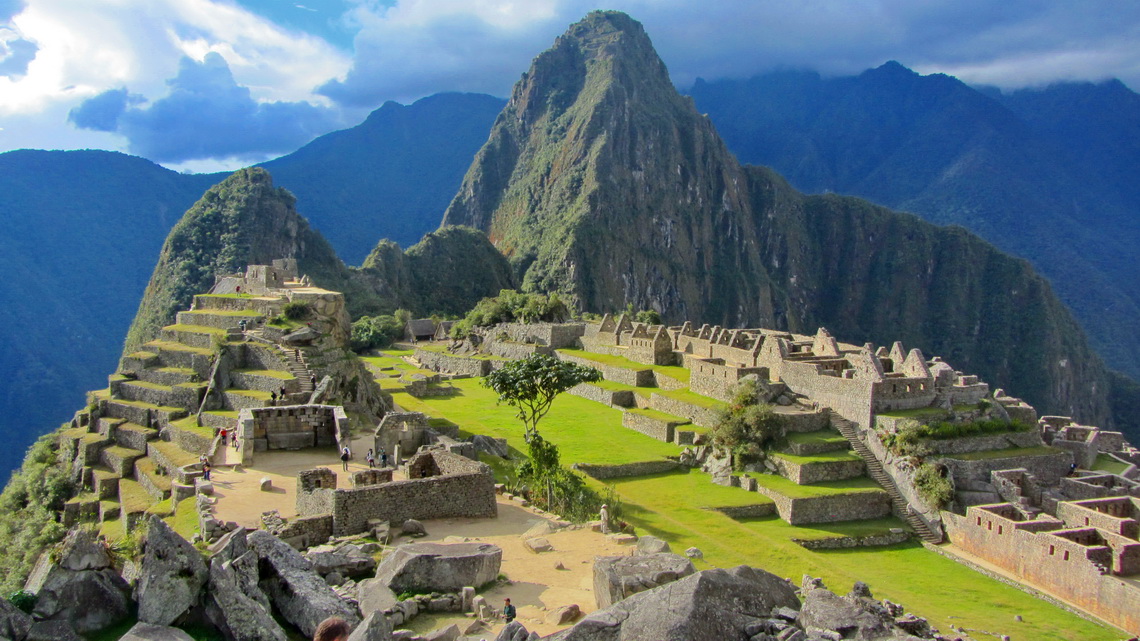 When we arrived at the entrance we headed firstly 3 hours to the 3082 meters high Cerro Machu Picchu to avoid the heat and main tourist time. 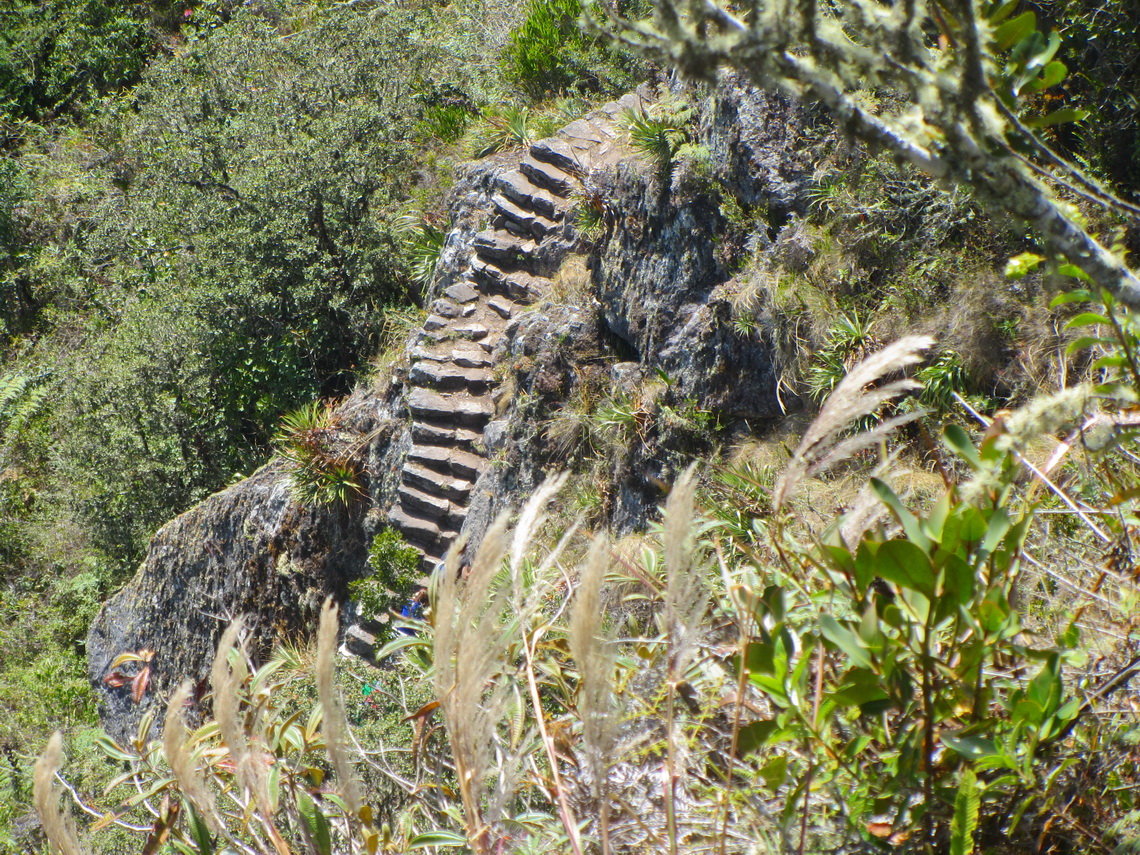 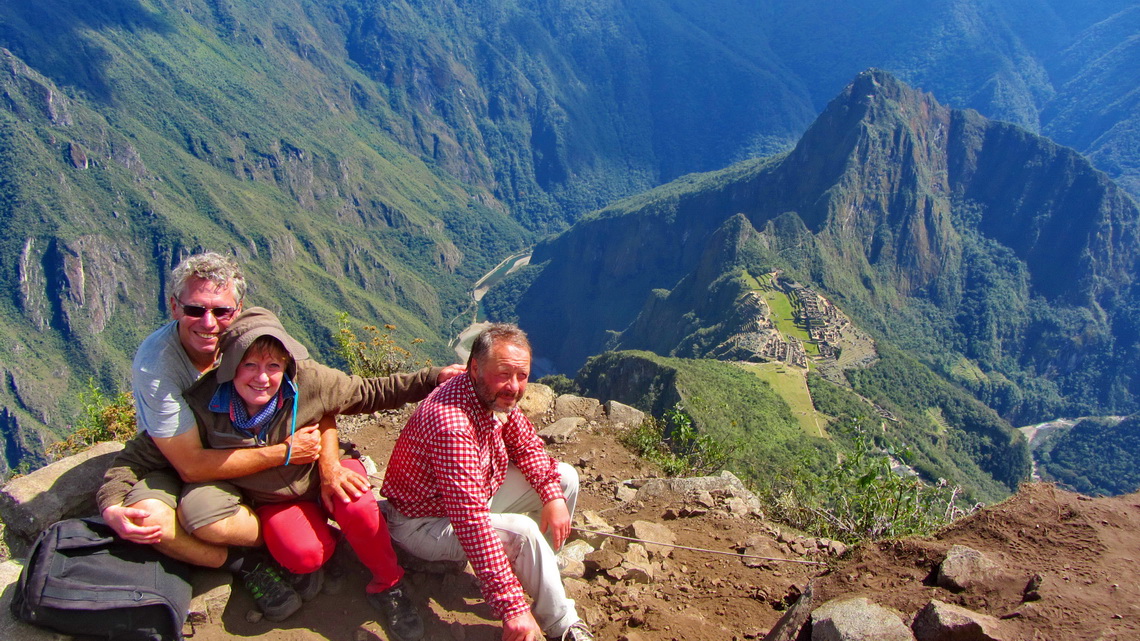 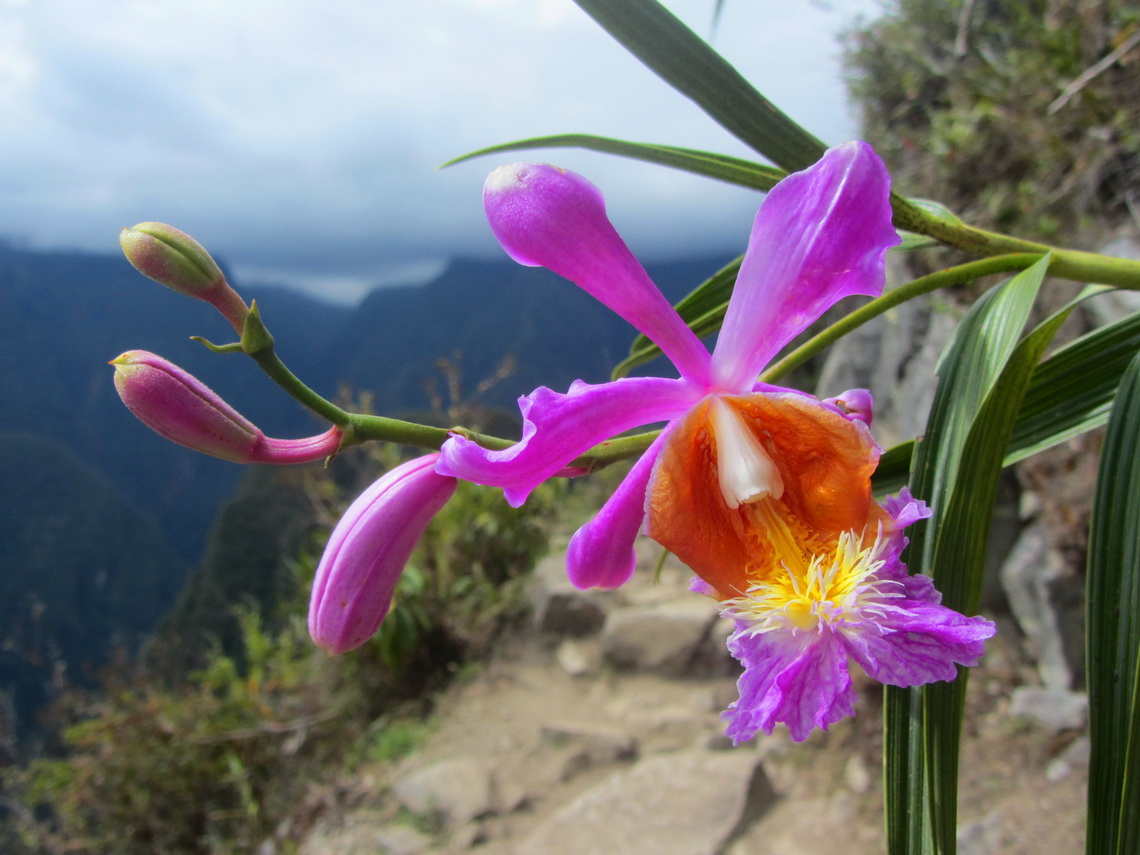 A demonstration of the amazing engineering capabilities of the Incas is the path to and the bridge Puente Inca, which was the second entrance to Machu Picchu. It leads through a high vertical wall to a gap of approximately 3 meters. In former times there was a drawbridge and the Incas closed the bridge in case of danger. Now there is just timber. 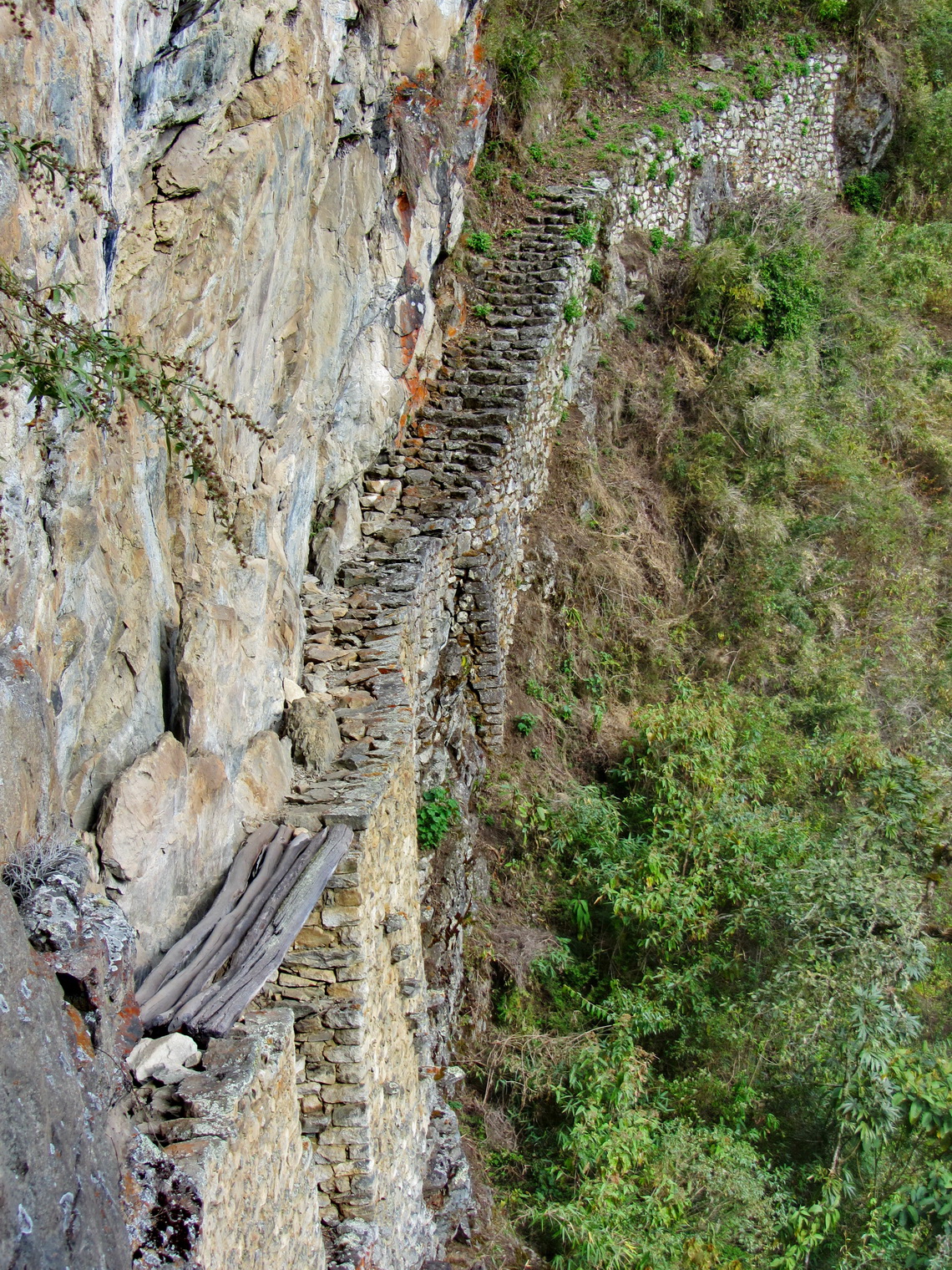 We chose the same way back to our car in Santa Teresa and found another wonderful place there. 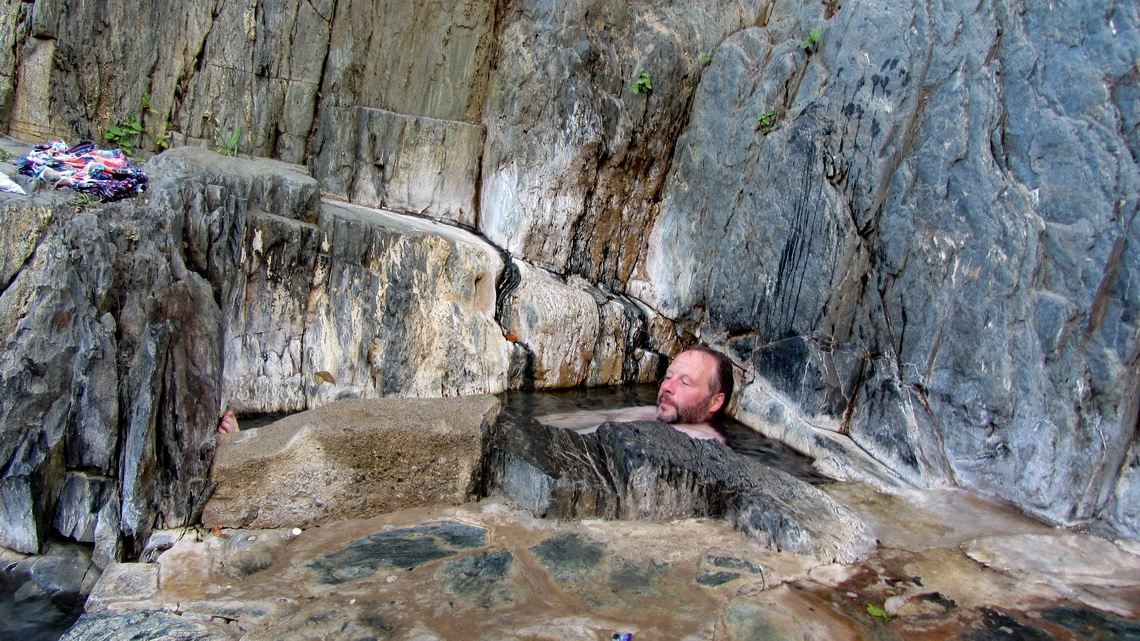 In the sacred valley we visited the quite large Inca sites Ollantaytambo and Pisaq. Their entrance fee is included in the Boleto Turistico of Cusco. 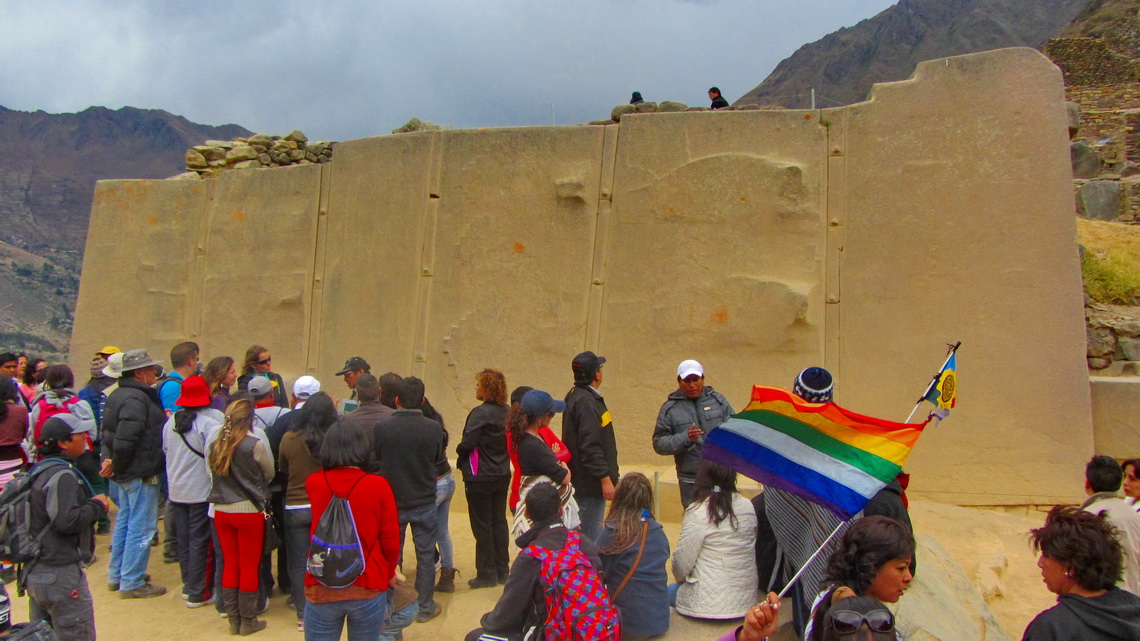 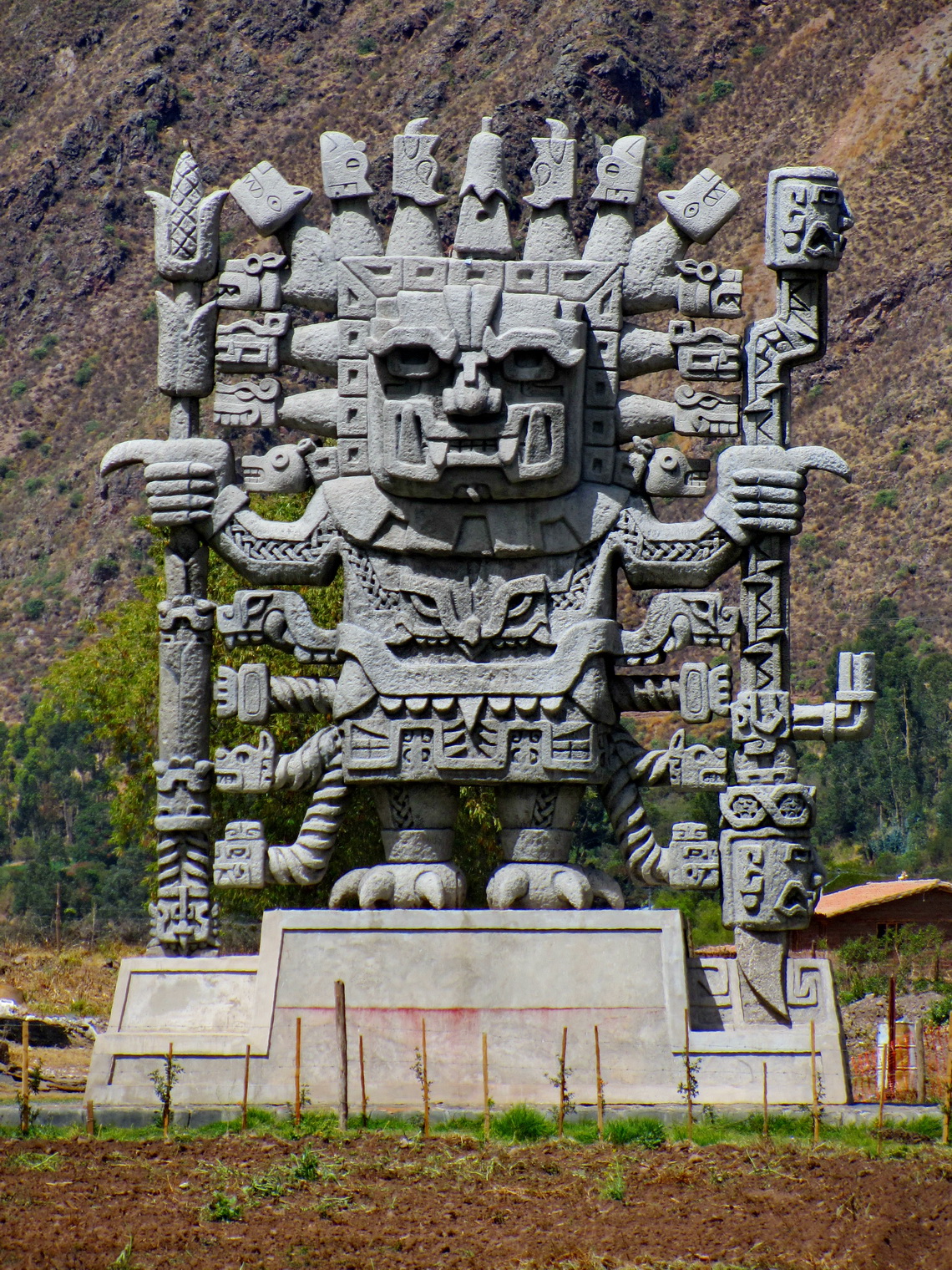 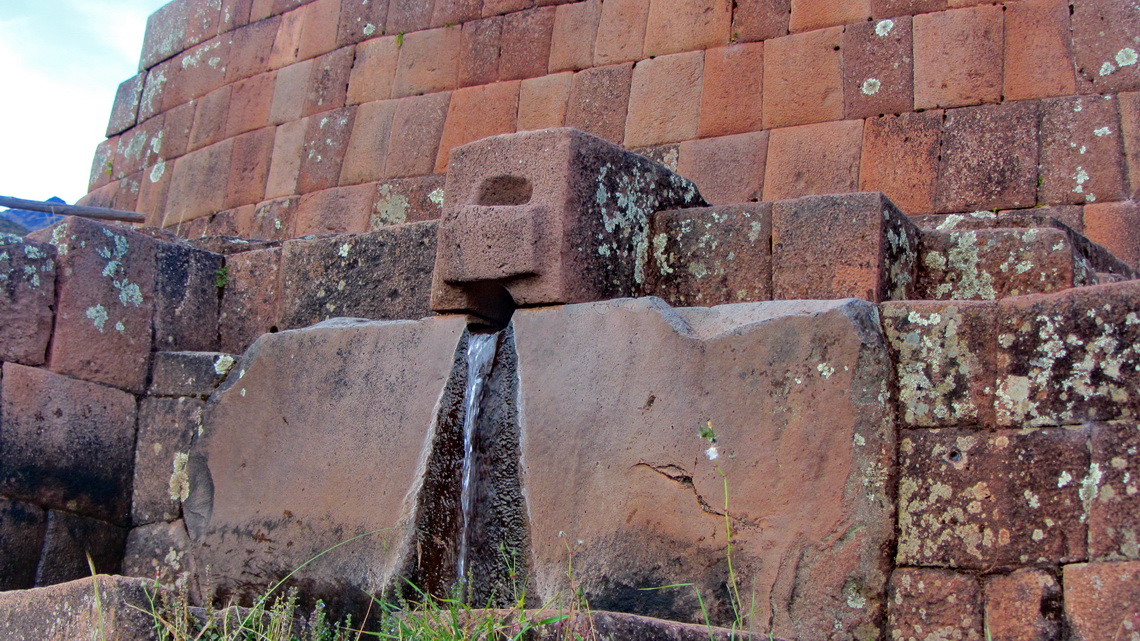 On August 6th 2013 we said bye bye to Tommy and continued on the next morning to Abancay.