The spectacular Cordillera Huayhuash lies few kilometers North of the famous Cordillera Blanca and its main city Huaraz. It is a relative small range with stunning pinnacles sugared with enormous mass of ice and snow. Nevado Yerupaja is with 6617 meters sea-level its tallest peak and the second highest mountain of both: Peru and the tropics. Like all other major peaks of the Cordillera Huayhuash access to its summit is extremely difficult and dangerous. Even today some peaks are without any successful ascents for years. 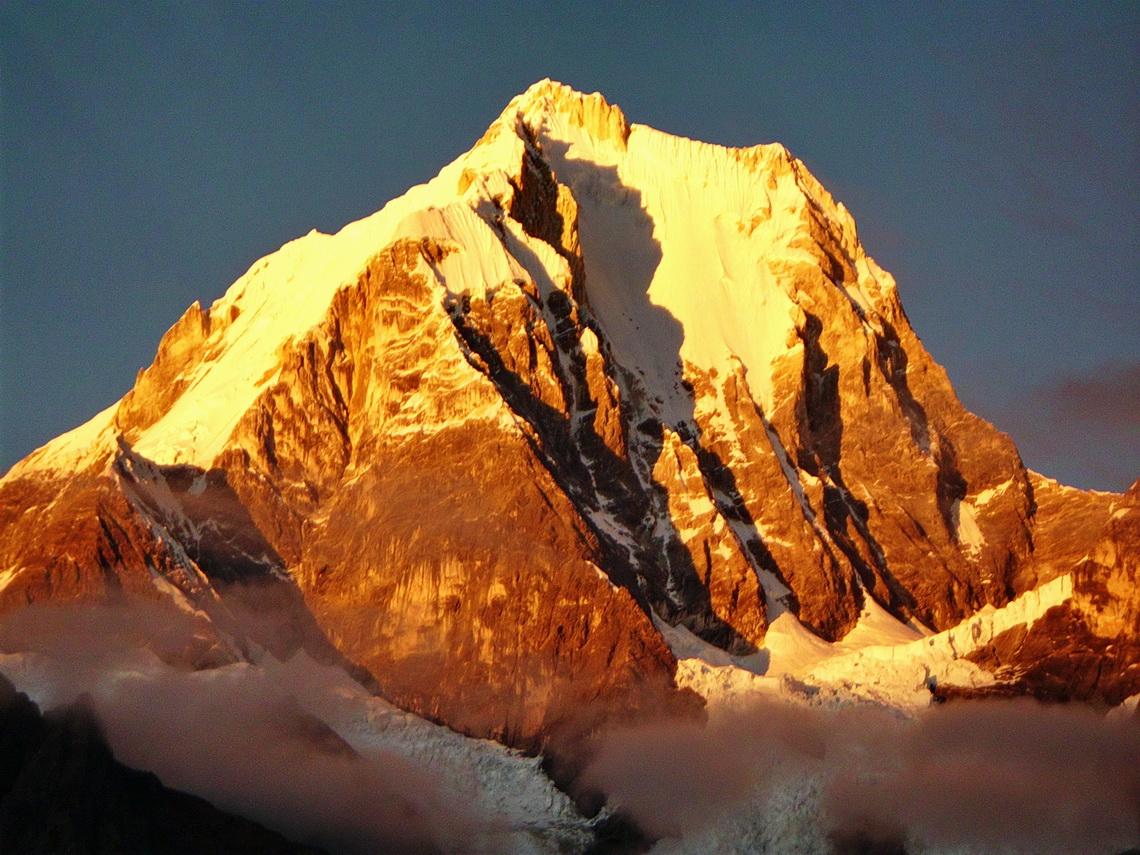 Thanks to the book and movie Touching the Void Cordillera Huayhuash became very popular in the last years: It shows the unbelievable story of Joe Simpson and Simon Yates when they climbed up the south-west face of 6344 meters high Siula Grande in the year 1985. On the way down Joe Simpson broke his leg. His companion roped him down the steep, dangerous and difficult north-west ridge. Suddenly Joe Simpson hung under an overhang and he couldn't move. There was no more rope. Simon was standing in deep powder on the very steep ridge. The weight of Joe Simpson moved him slowly but constantly to the abyss. His only choice to survive was to cut the rope. Joe fell into an huge crevasse. Simon searched him desperately but couldn't find him. He returned to the camp and was sure that Joe didn't survive the crash but Joe found a way out of the crevasse through the glacier with his broken leg. After three days he came back totally exhausted to the camp in the night just before his companion wanted to leave.

Cordillera Huayhuash can be circled in a 10 days hike with many high cols (two more than 5000 meters sea-level), pristine lagoons and beautiful campsites. Only one little village is on its way - a lot of food and other stuff must be carried. Thus we searched for mules in Chiquian, the last bigger settlement on the western side of Cordillera Huayhuash and reachable via a decent paved road. 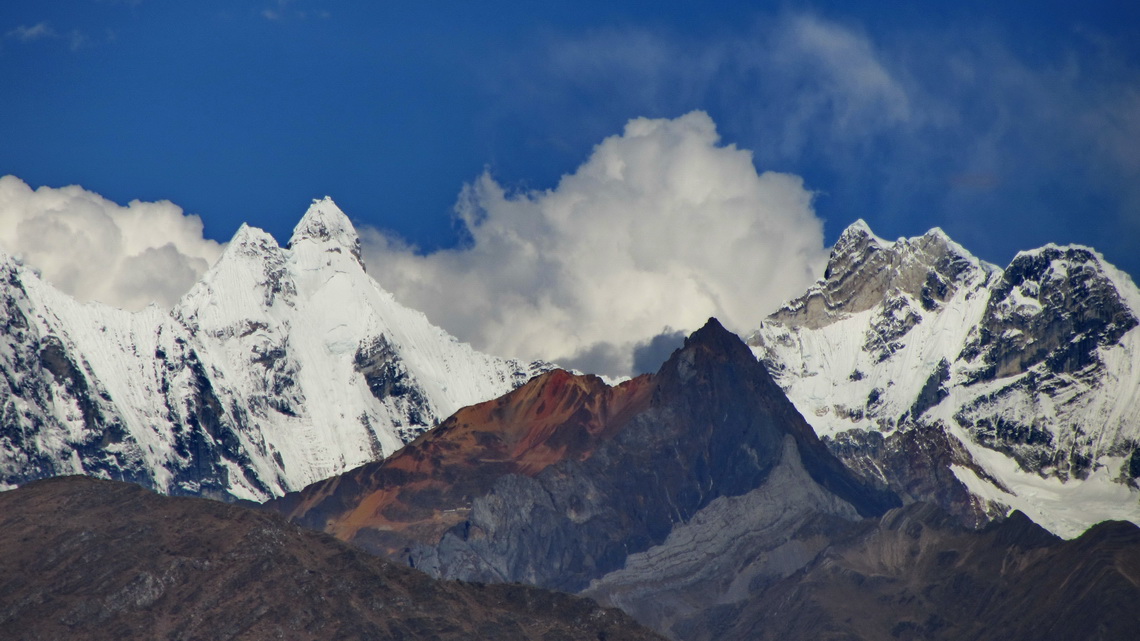 There was just one travel agency in Chiquian which was also responsible for the tourist office. But its manager Alex could not find a muleteer, put us off several times and disappeared finally. But when we purchased some food in a small grocery the owner asked us if we want to do the circle. His family has a long expertise and one of his brother is available. On the next morning we took the morning bus to Pocpa where his brother Susman waited with the donkey Teodoro and the two mules Rambo and Teja. We were laughing happily because Teodoro is the Spanish name of our newly born grandson Theo! 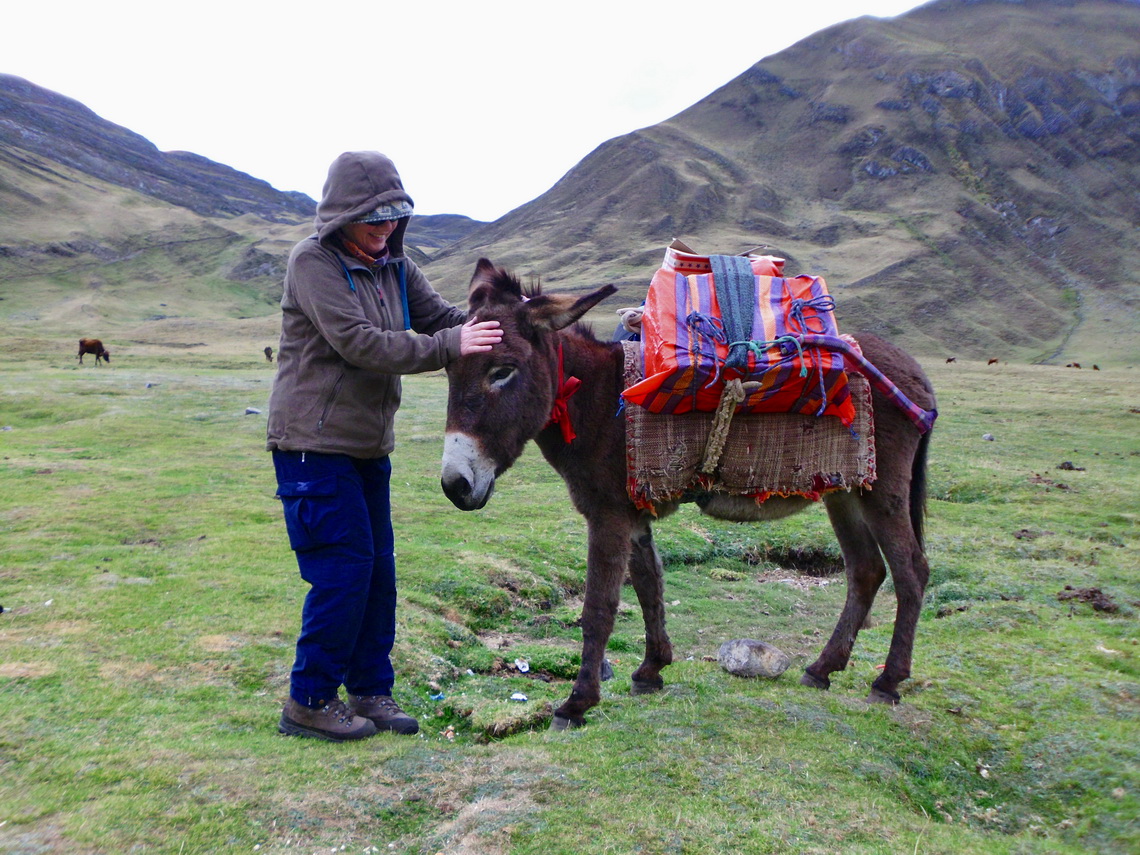 We walked several hours on a mining street to the first camp Quartelhuain (GPS coordinates see table at the end), which was a little bit noisy in the night because mining trucks were very busy. But there were some interesting lime-stones in this camp. 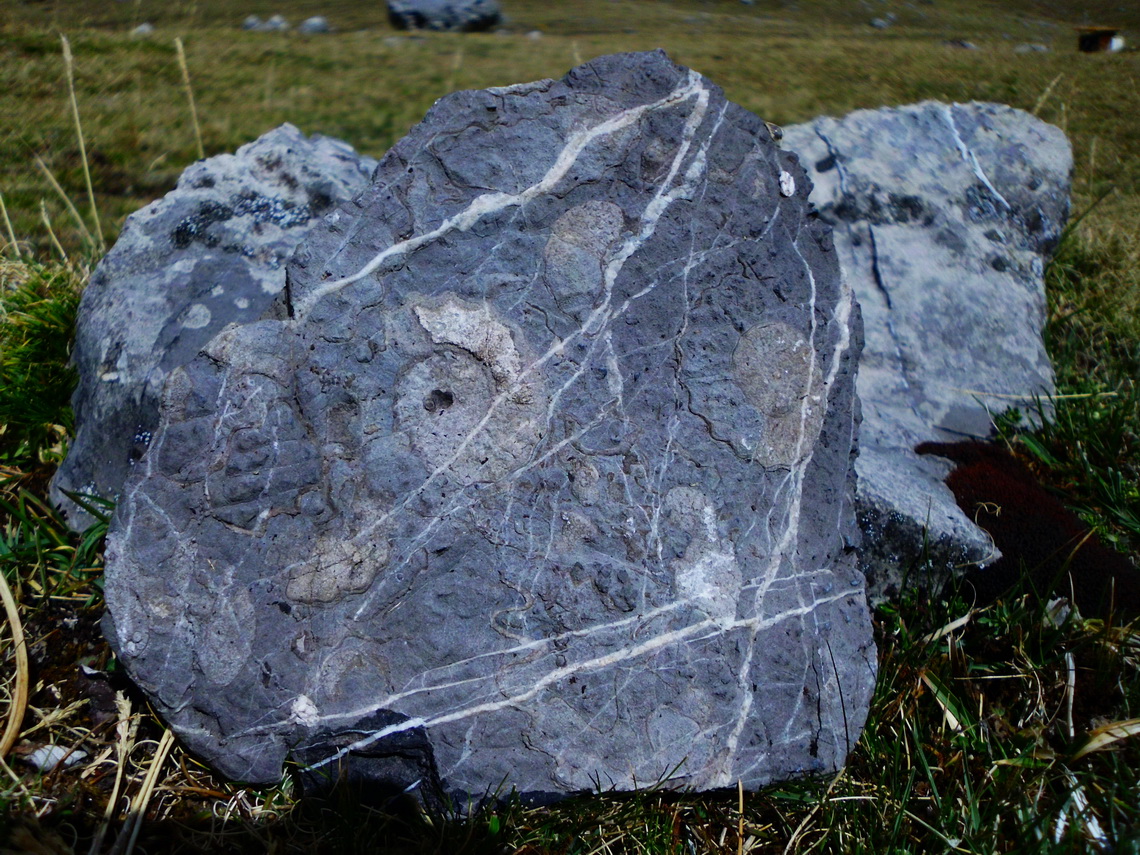 On the second day we hiked over the 4690 meters high col Cacananpunta to the camp Janca. The landscape reminds us of the mountain range Karwendel in the Alps with its lime peaks, which are seldom in the Andes. From Janca we visited the pristine lakes Laguna Mitucocha and Ninacocha in the late afternoon, which provide outstanding views to Nevado Jirishanca, its neighbors and north-eastern glaciers. Jirishanca means Hummingbird beak of ice and indeed it is an incredible sharp pinnacle with two summits.

We crossed the 4630 meters high col Carhuac before we came to the third camp Incahuain which is on shore of marvelous Laguna Carhuacocha. There we met two younger couples from Europe, the first and only tourists until the final camp. The fourth day was one of the top highlights because we walked along several lakes and a steep slope to the col Siula Punta (4830 meters sea-level). Most of the major peaks were in front of us and we had fantastic weather. By coincidence 14 years old boy Francisco was on the col. He guided us to the summit of the 4950 meters high Cerro Azulcocha, which requires some easy climbing. The path is well marked with little stone pyramids. 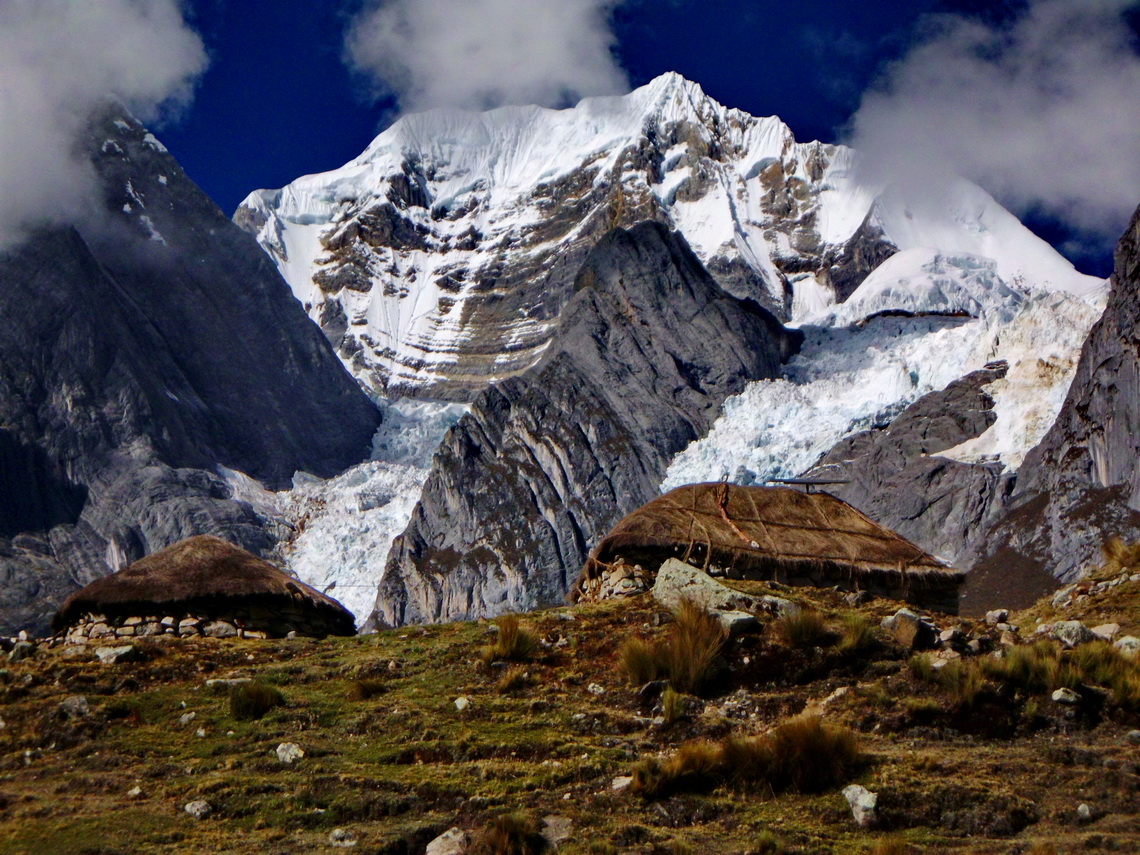 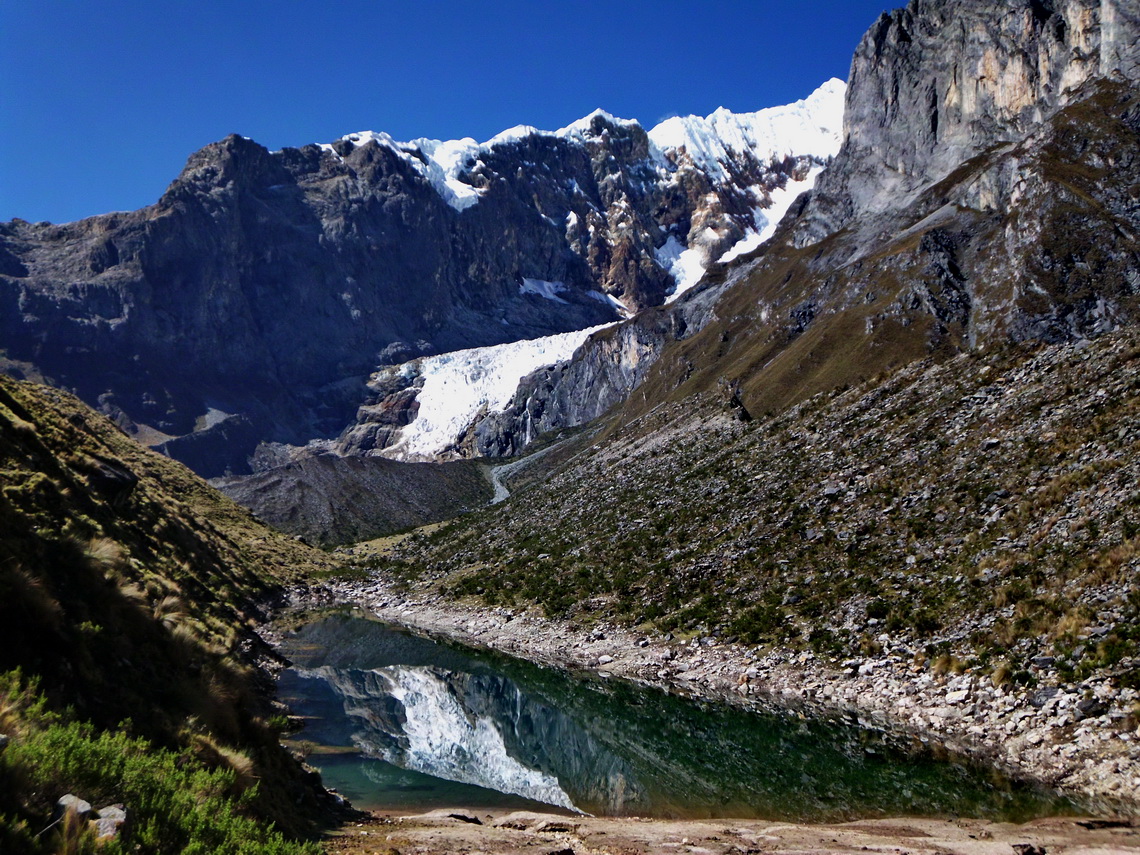 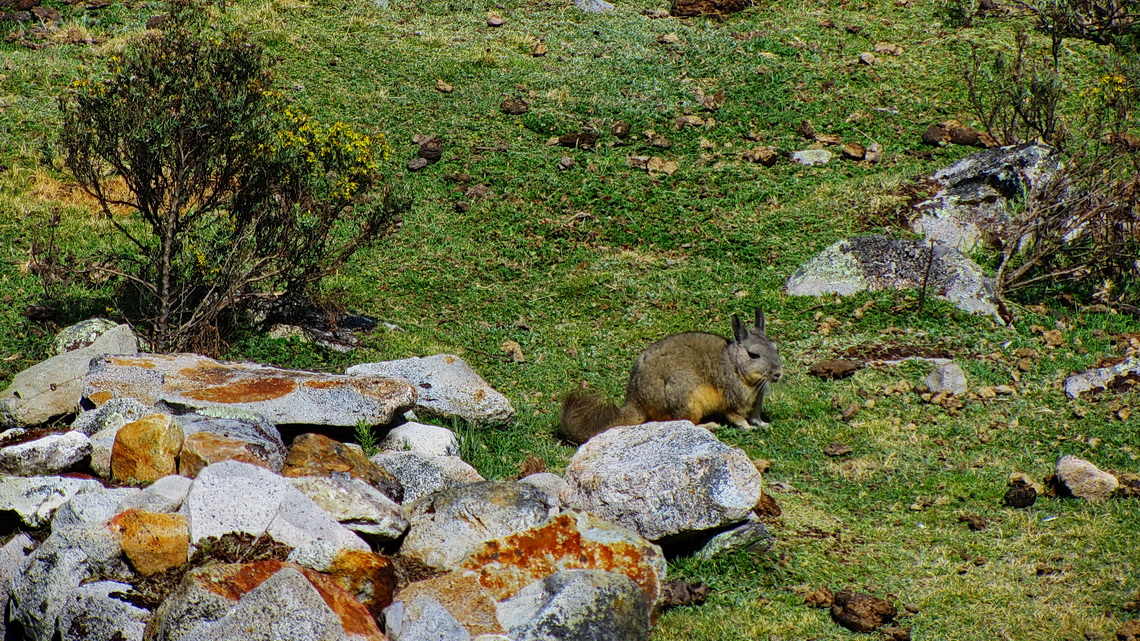 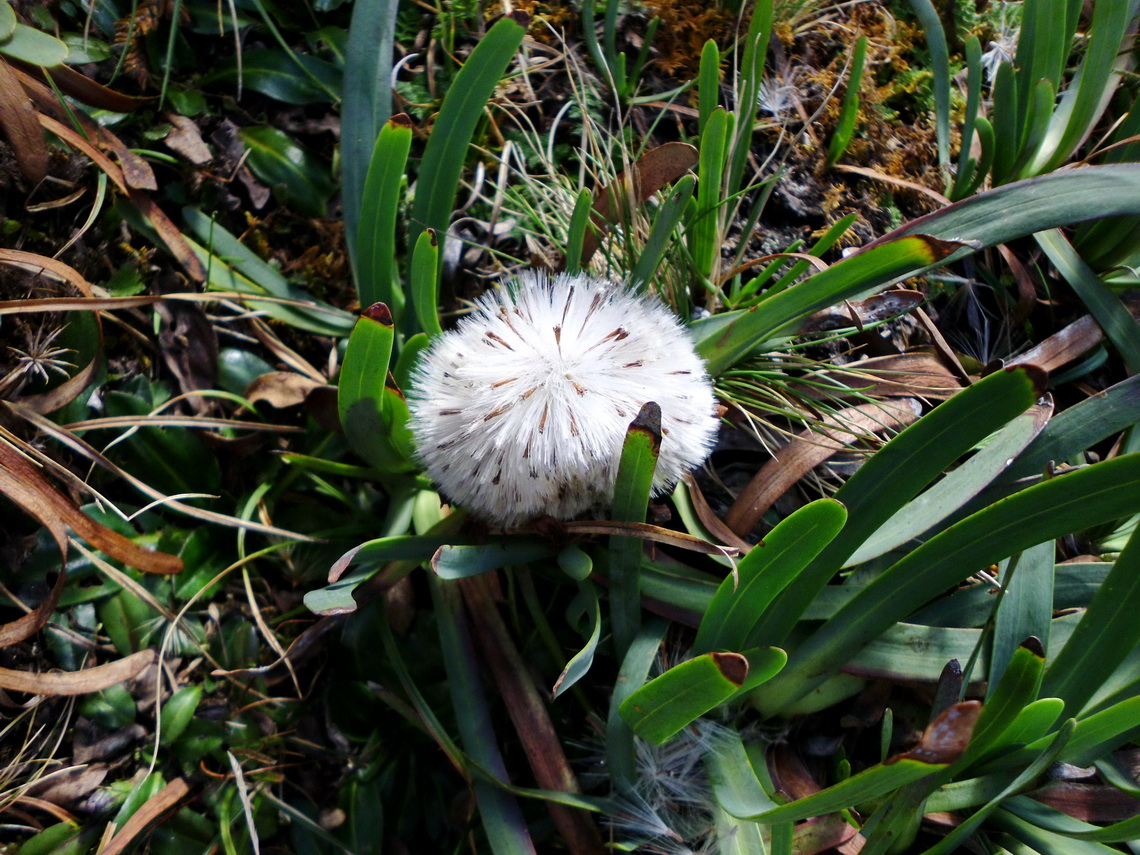 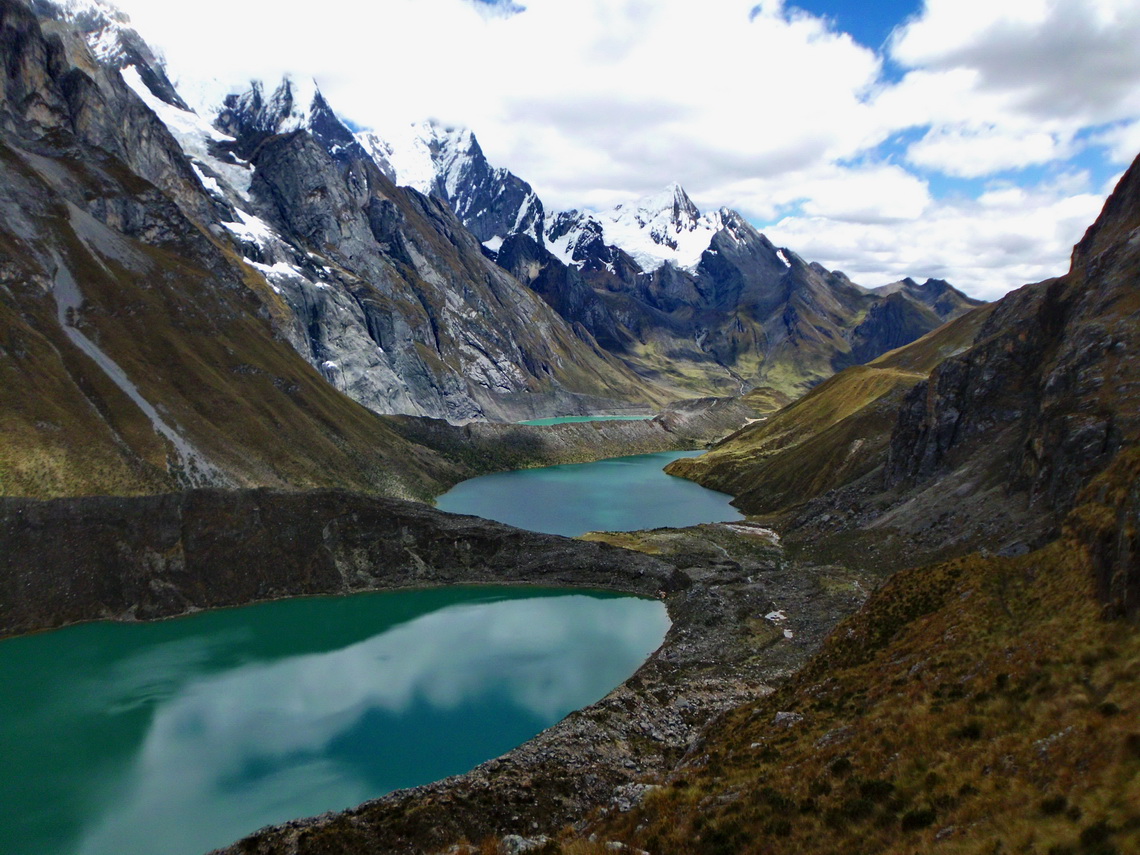 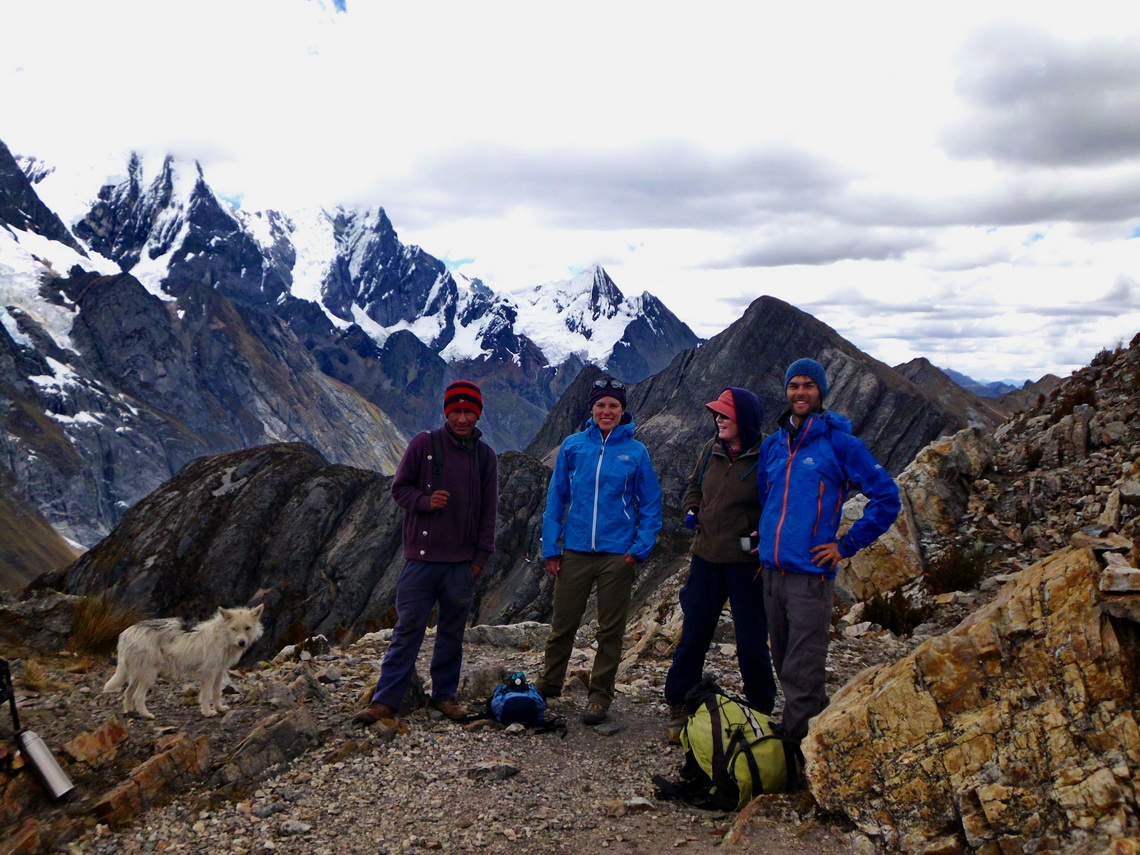 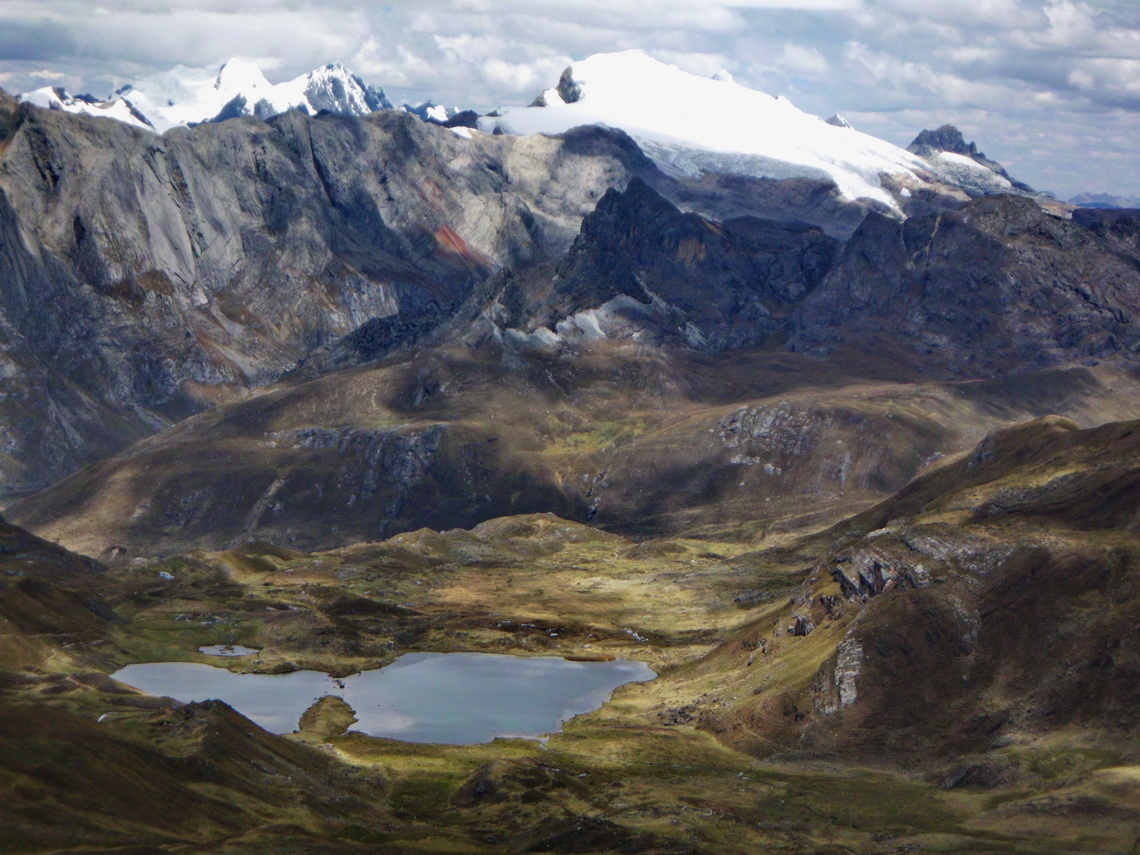 The path over Siula Punta is not possible for mules, thus Susman took the way via Punta Carnicero to our fifth camp Huayhuash. There in the southern part of Cordillera Huayhuash the mountains are more or less 5500 meters high but also with enormous glaciers and snow. The next camp Aguas Termales is located directly on hot springs, which we enjoyed intensively despite some rain. But before we had terrific views when we had traversed the 4780 meters high col Portachuelo de Huayhuash. 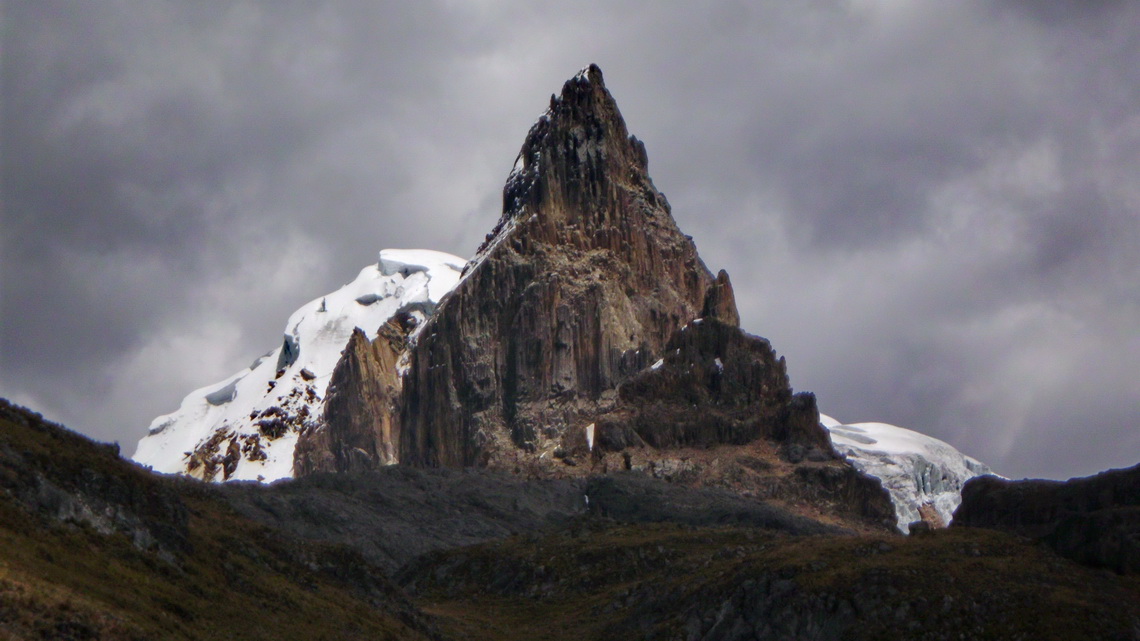 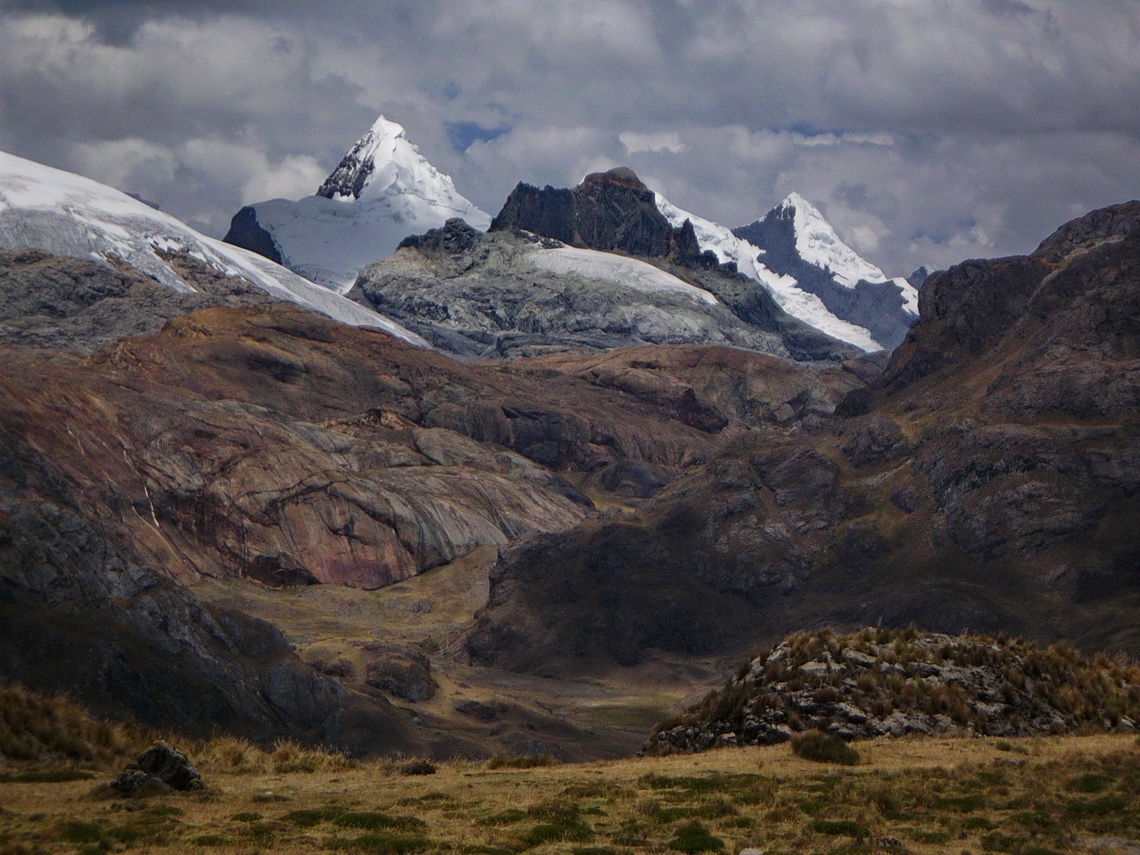 Like on all mornings the sun was shining when we had breakfast. Crossing Punta Cuyoc was the target of the sixth day, which is with 5050 meters sea-level the highest col of the circle. Just 550 meters below (vertical) is the beautiful camp San Antonio, which is the highest camp and naturally the coldest. 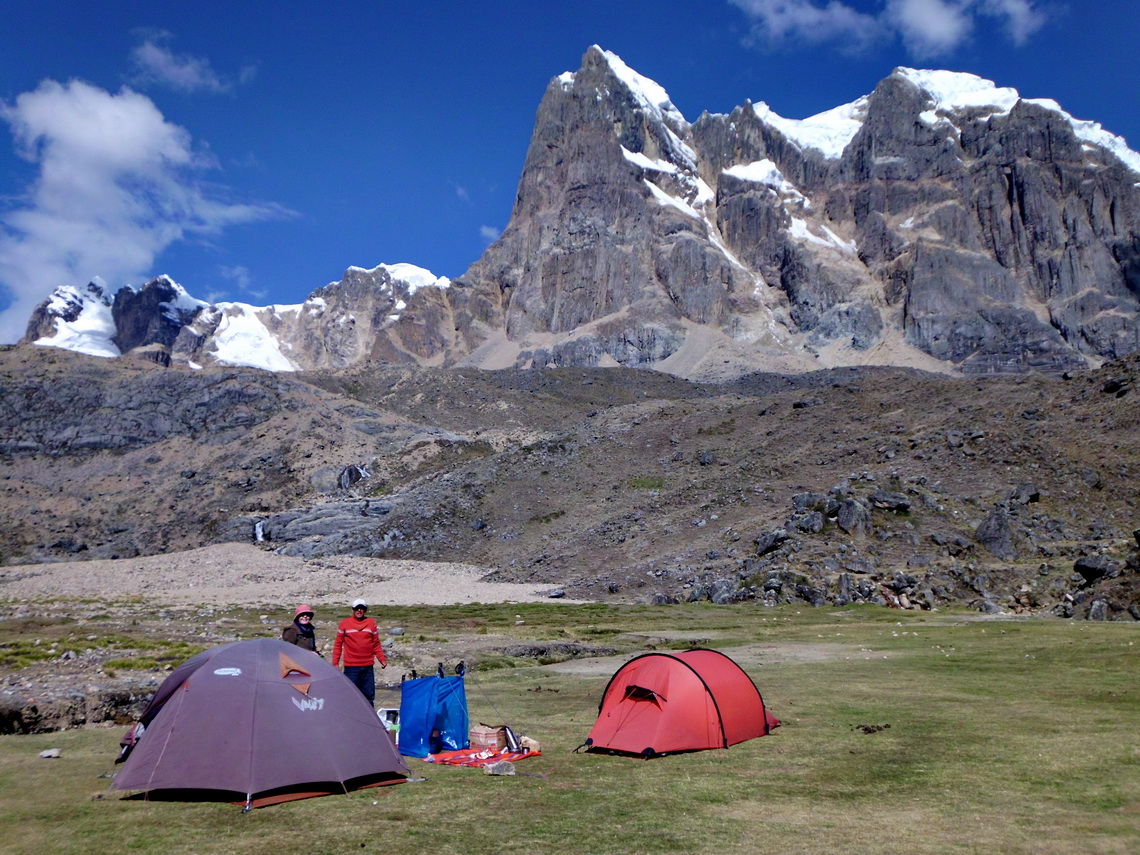 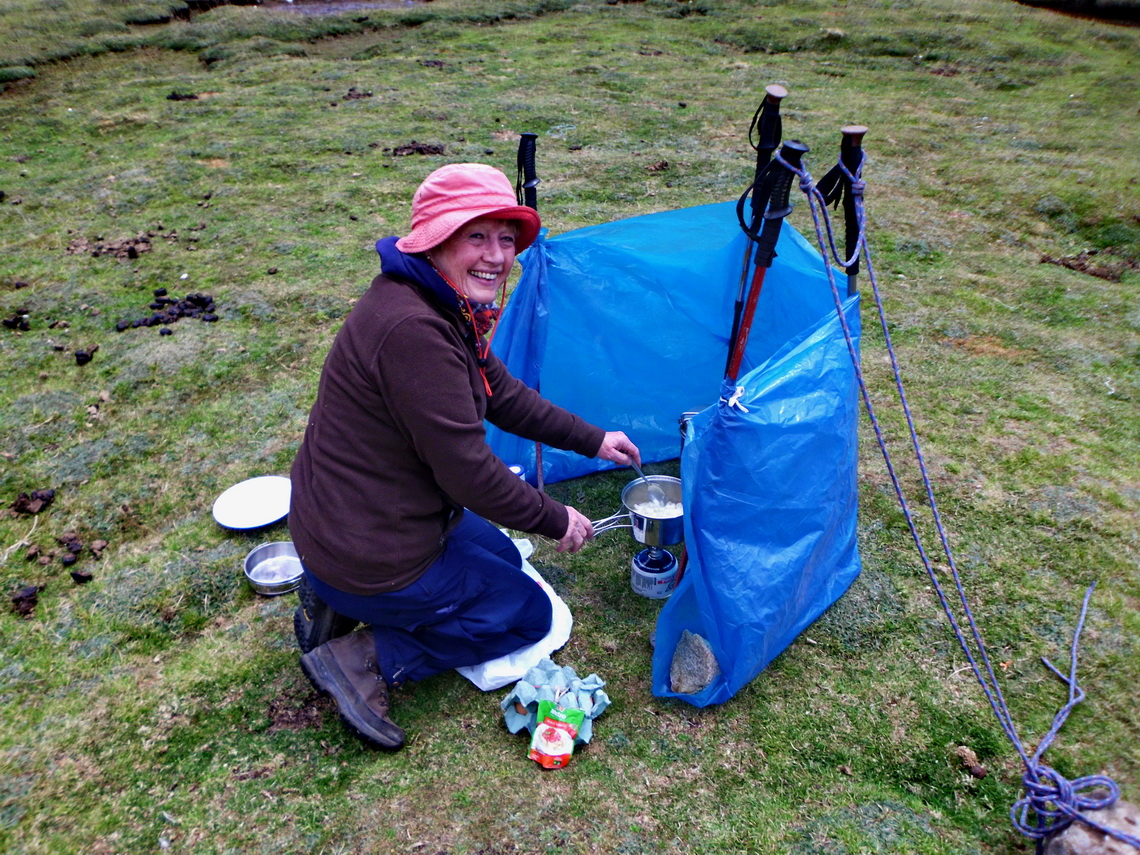 We split the second time with Susman and the animals to climb up the steep col San Antonio (5020 meters sea-level) and its most western peak Cerro San Antonio Este, 5079 meters high. In the direct line between the col to the summit is a small rocky band where we had to scramble a little bit. On the top we detected a good and well marked path on the northern side and along the rocky band back to the col. 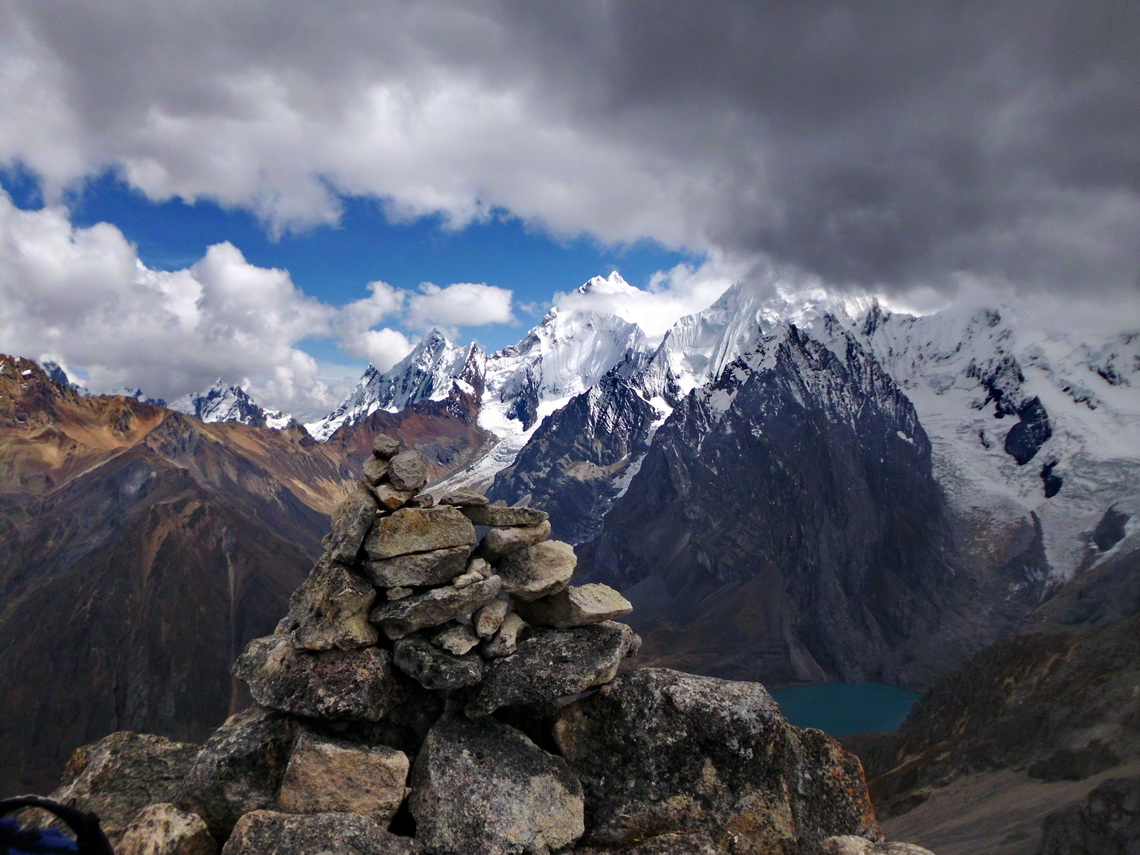 The way along Rio Calinca to Huayllapa was endless, the same way Joe Simpson and Simon Yates had chosen 1985. It is the only village on the Huayhuash circle and the only place where food is available. Desperately we needed some bread despite the fact that we had started this trip with 60 rolls. We were allowed to camp on its sports fields and soon a lot of kids came to watch us. Susman organized a four course dinner for us made with local food - It tasted heavenly. 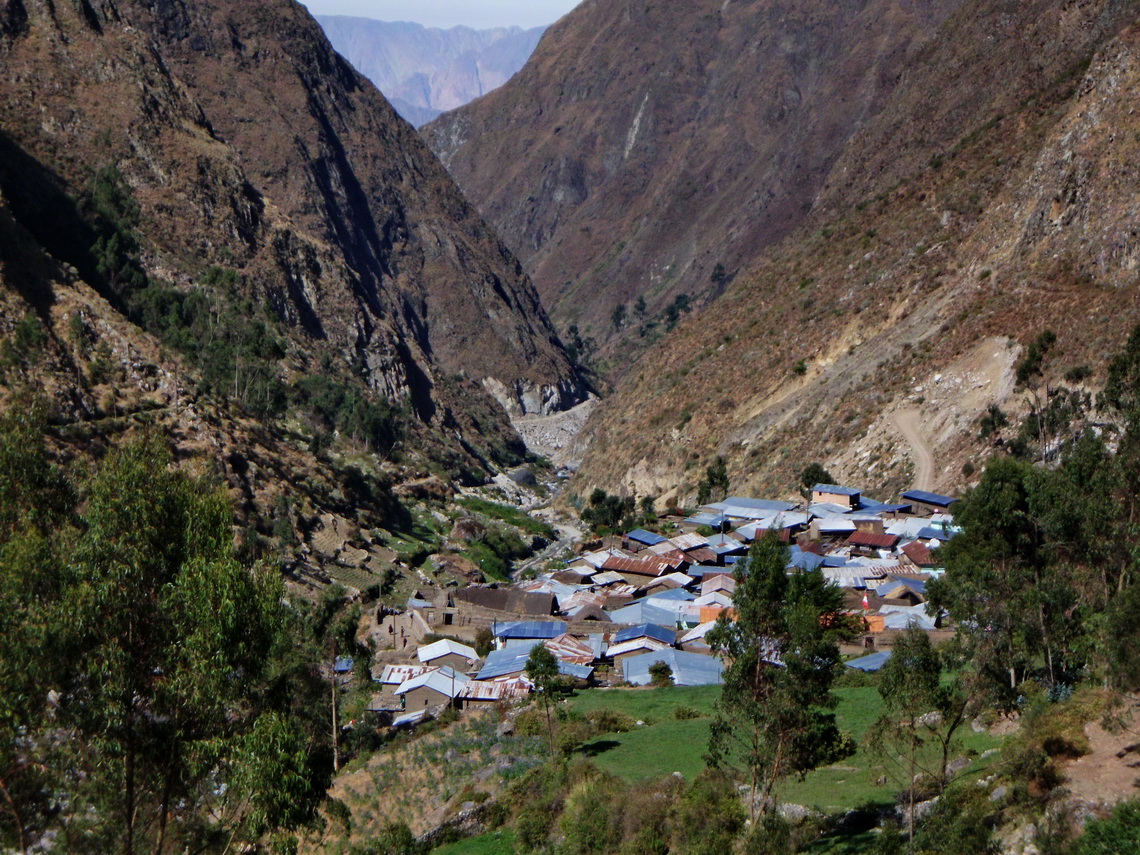 Huayllapa is less than 3500 meters high and the next col Tapush Punta is 4770 meters high. We were sweating in the sun because the ascent is steep. But we were compensated with a pristine landscape decorated with many animals and flowers. 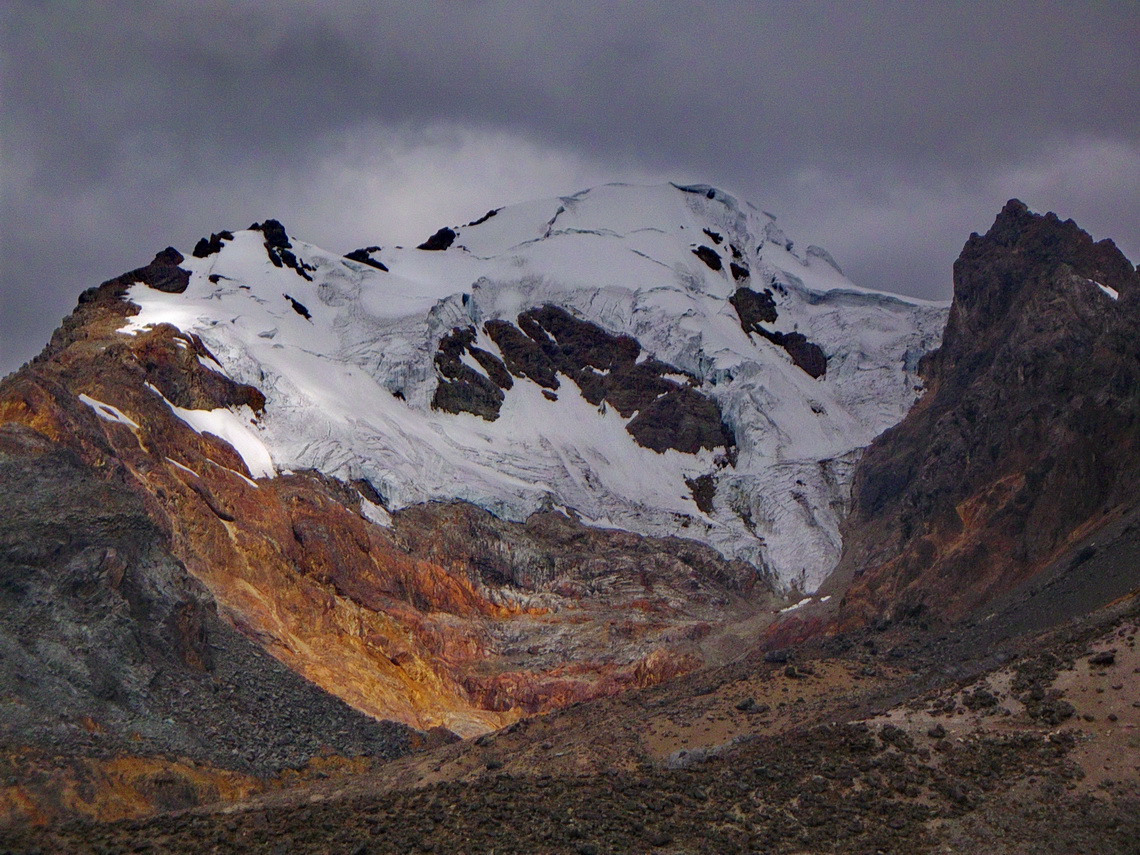 After staying our eighth night in the camp Angocancha and passing another col (4850 meters high Llaucha Punta) we descended to Laguna Jahuacocha, the top highlight on the western side of Cordillera Huayhuash. After lunch we hiked in the rain to Laguna Solteracocha. Fortunately it cleared up when we on its northern moraine and we could enjoy unbelievable views to the giants of Cordillera Huayhuash just in front of its huge glaciers. 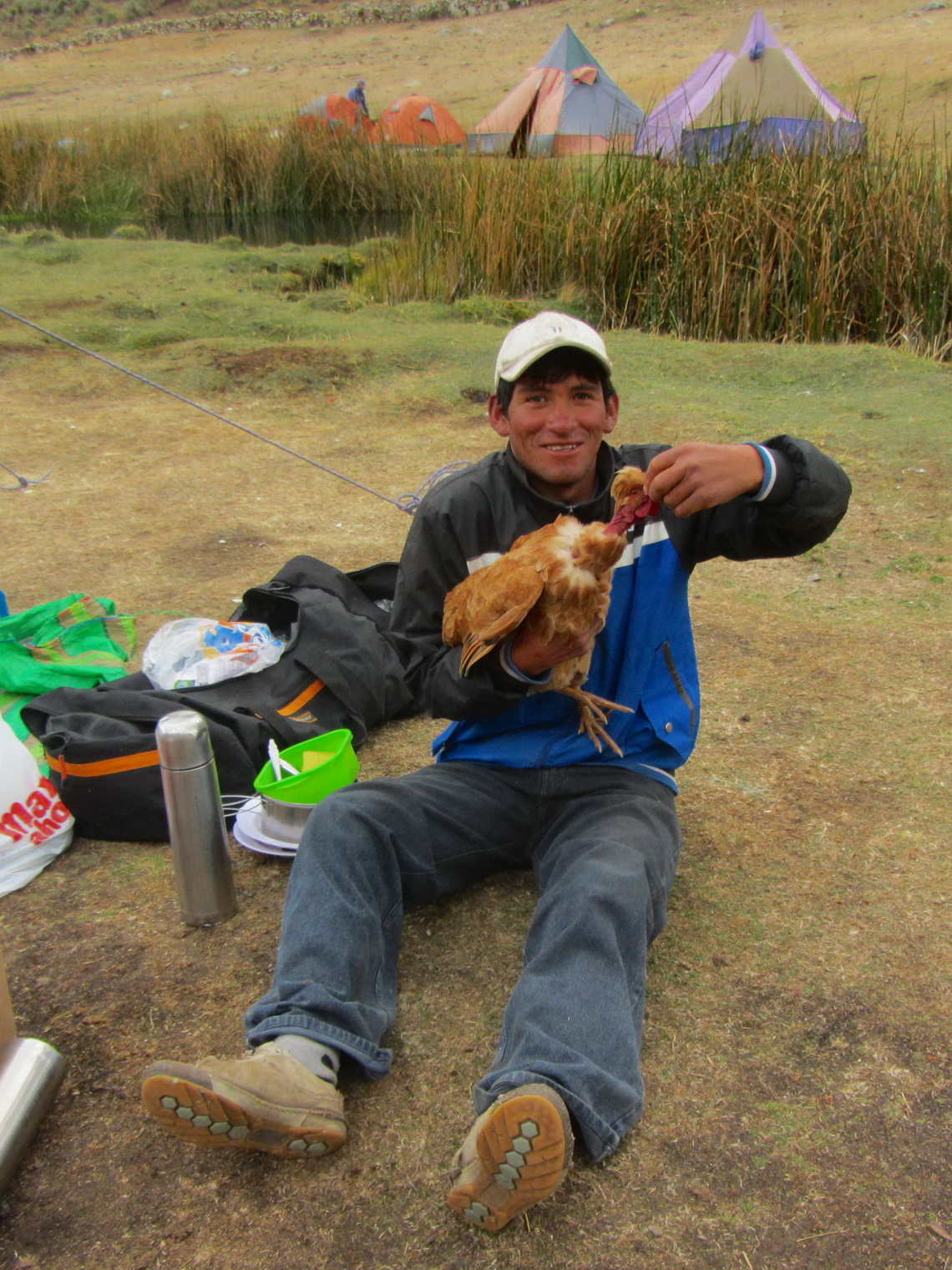 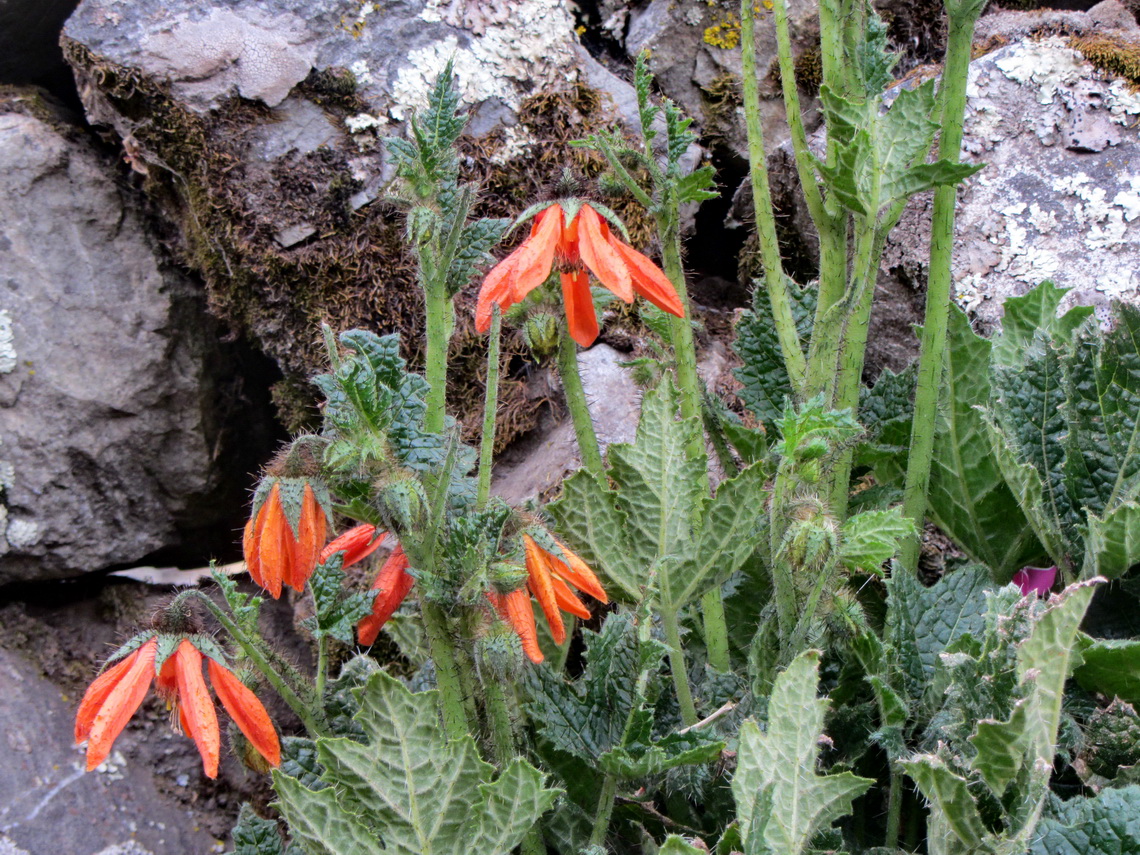 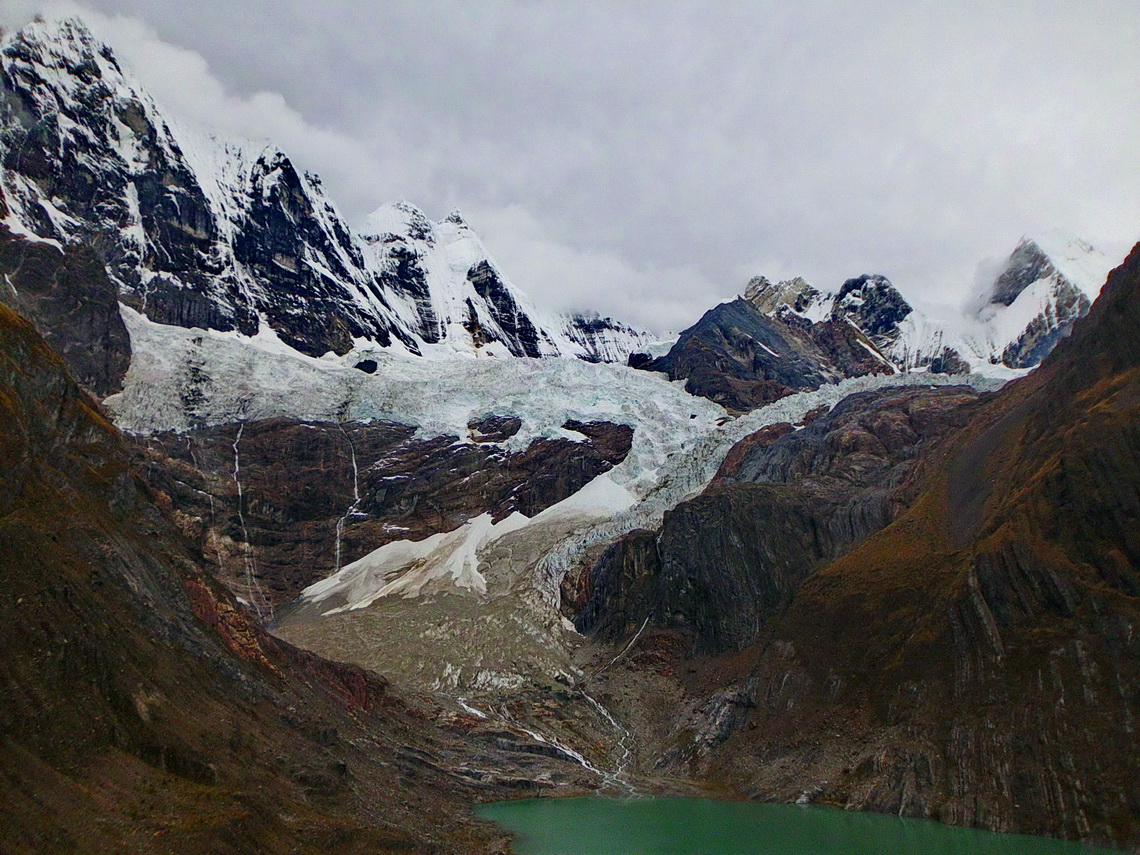 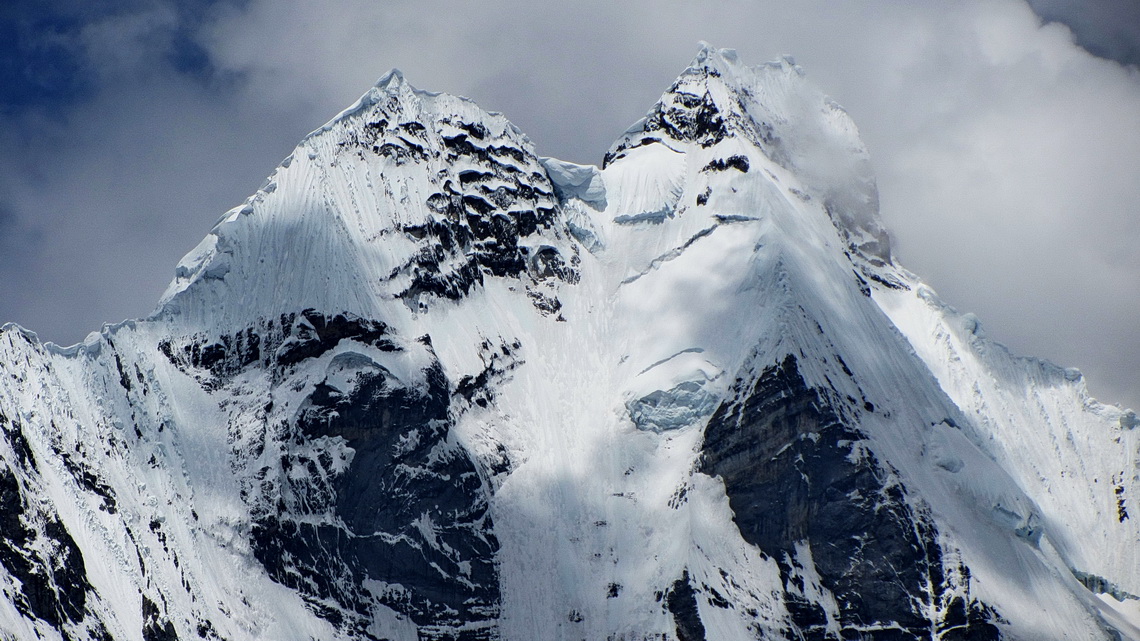 It was almost dark when we returned at the camp but Susman had a little surprise for us. 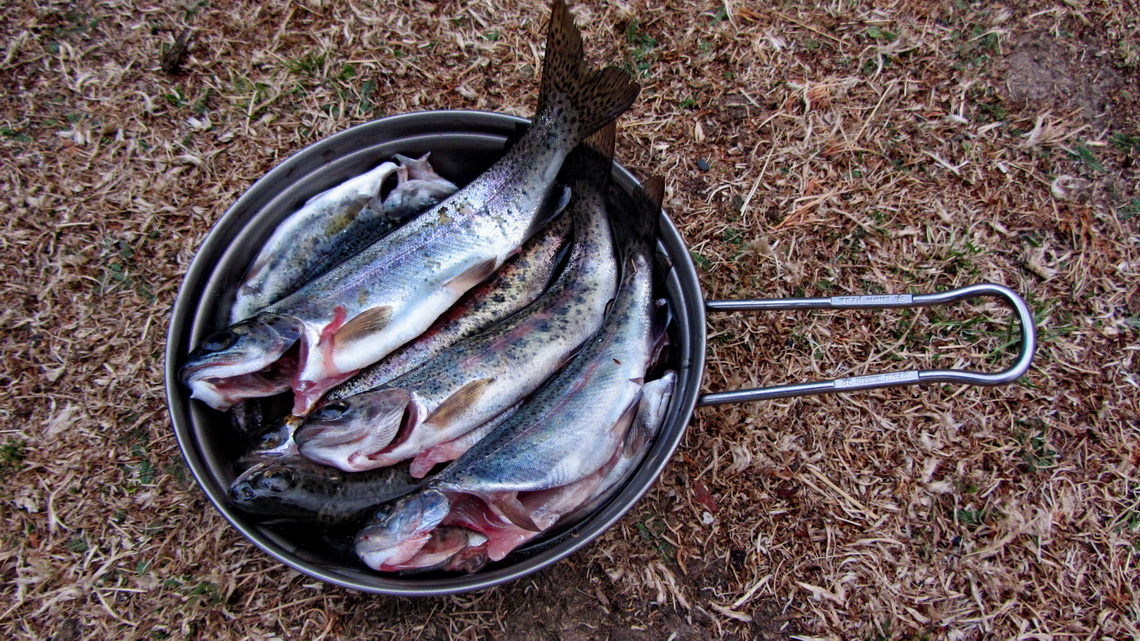 On the tenth and last day we hiked back to civilization along an aqueduct, which is not sketched in the excellent map 0/3c Alpenvereinskarte Cordillera Huayhuash of the Austrian Alpine Club (scale 1:50,000), see also www.alpervereinskarten.at. We arrived the street in Llamac, where Susman had already organized a lift for us back to Chiquian. We would like to thank Susman very much for his extraordinary kindness and assistance - we had so much fun. 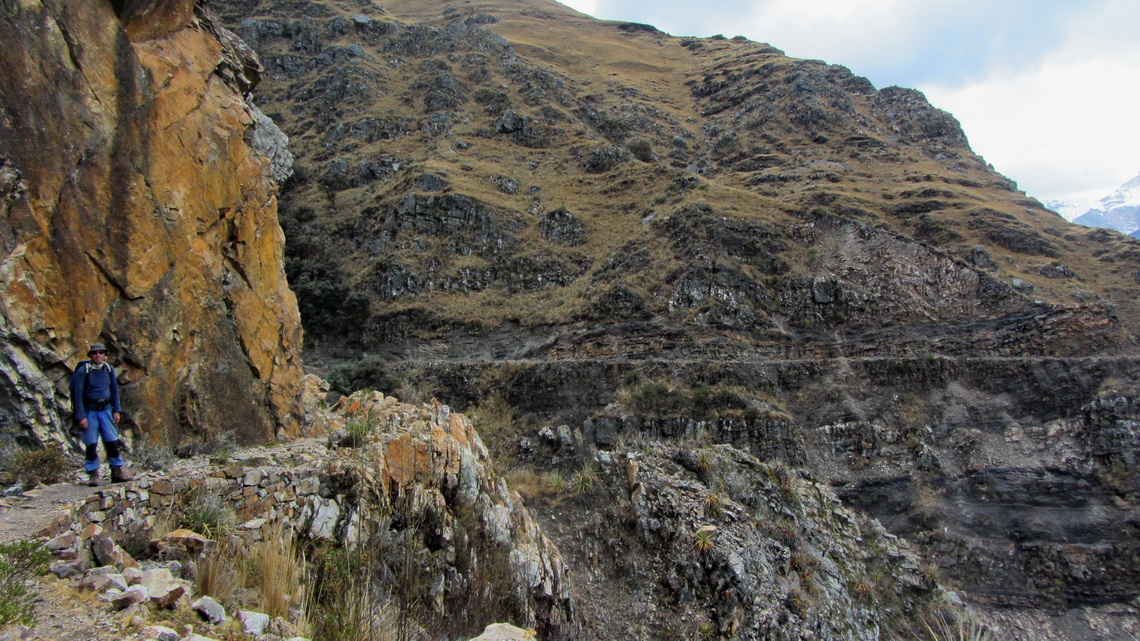 On the next day we drove to Huaraz, the "Chamonix" of the Peruvian Andes, which we had visited 32 years ago. It was October 3rd 2013 and the weather forecast for the next days was everything but encouraging. Finally the rainy season started, thus we decided to head immediately to the Pacific coast.