Nevado Puracé is with 4649 meters sea-level the highest mountain in the area of the beautiful city Popayan in the southwest corner of Colombia (see article Nevado del Tolima and Farallones de Cali). It is an active and heavily smoking volcano in the Cordillera Central (central range) of the Andes which erupted in 1977 the last time. Still it is called Nevado - Snow mountain but due to global warming we saw no bigger snow fields on its top.

The eastern side of Nevado Puracé leads to the Rio Magdalena. This river is called Mother of Colombia because it is the longest one in Colombia, many provinces are on its shore with huge population and it crosses the nearly the whole country from the Ecuadorian border to the marvelous Caribbean beaches. The upper Rio Magdalena valley is a beautiful, pleasant, lush and fruitful area with two Cultural UNESCO World heritage sites: San Agustin, which is famous for its several 1000 years old effigies and Tierradentro, which is grand for its mystic tombs. 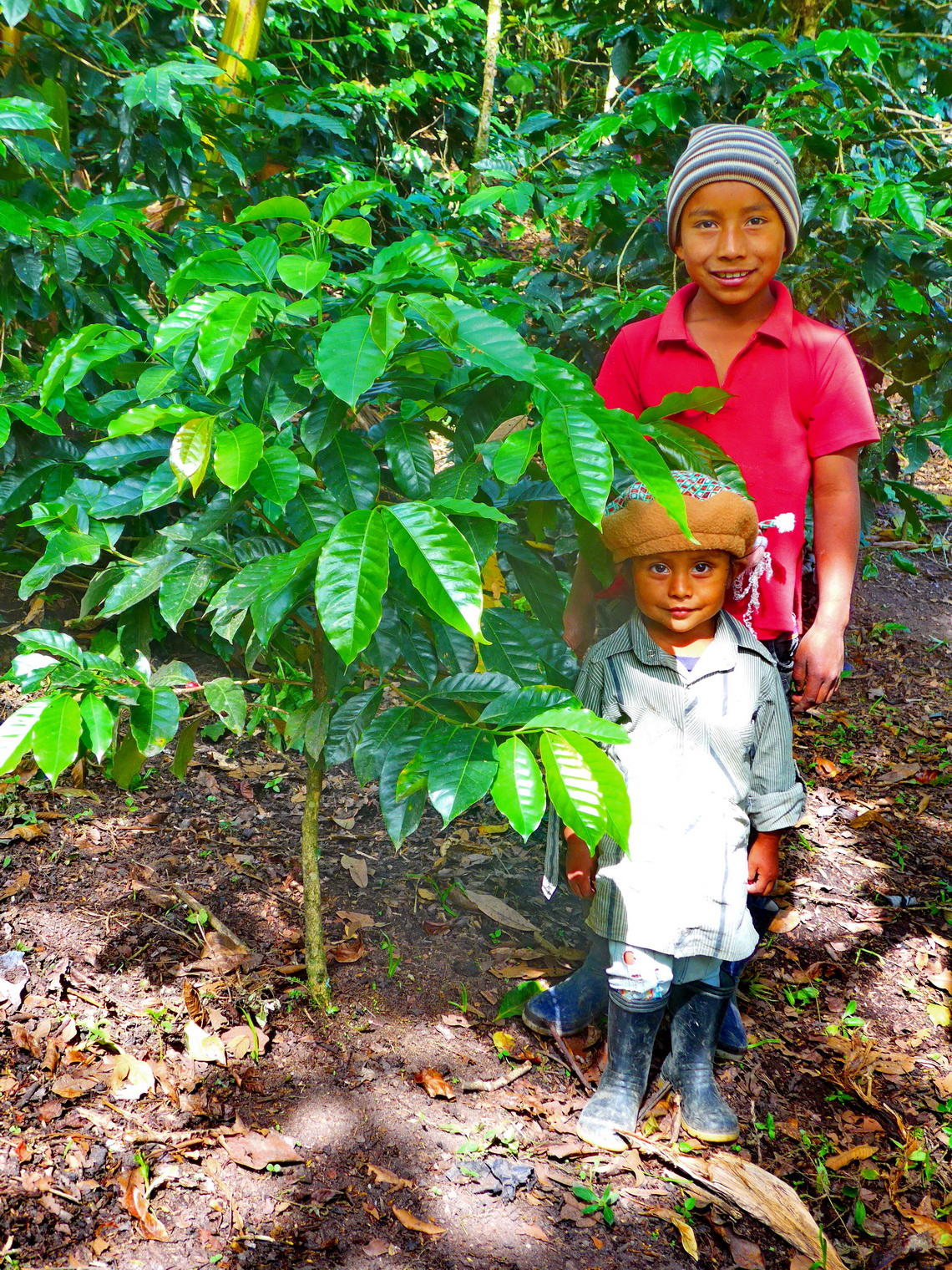 We came to Colombia in the late afternoon of December 16th 2014 and we headed to the little town Tuquerres to visit Laguna Verde and Volcan Azufral. But it was raining cats and dogs when we wanted to start early next morning.

The rain stopped at lunch time and we dared to take a taxi to the starting point of the hike to Laguna Verde. This was a good decision because the road was ugly. From there a good path leads in two hours to the stunning Laguna Verde with its green water. It is located at 3700 meters sea-level in the huge crater of the semi-active Volcan Azufral, which can be accessed via the Paramo without a trail. Azufral means sulphur and you see a lot including smoke. This track is included in the GPS coordinates file of Colombia. 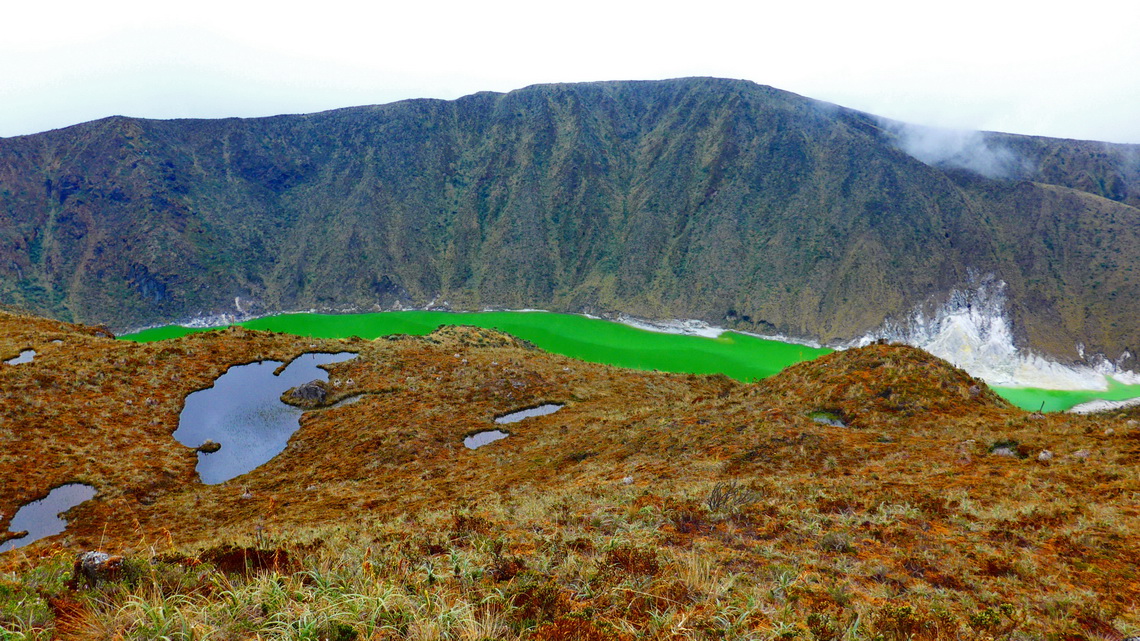 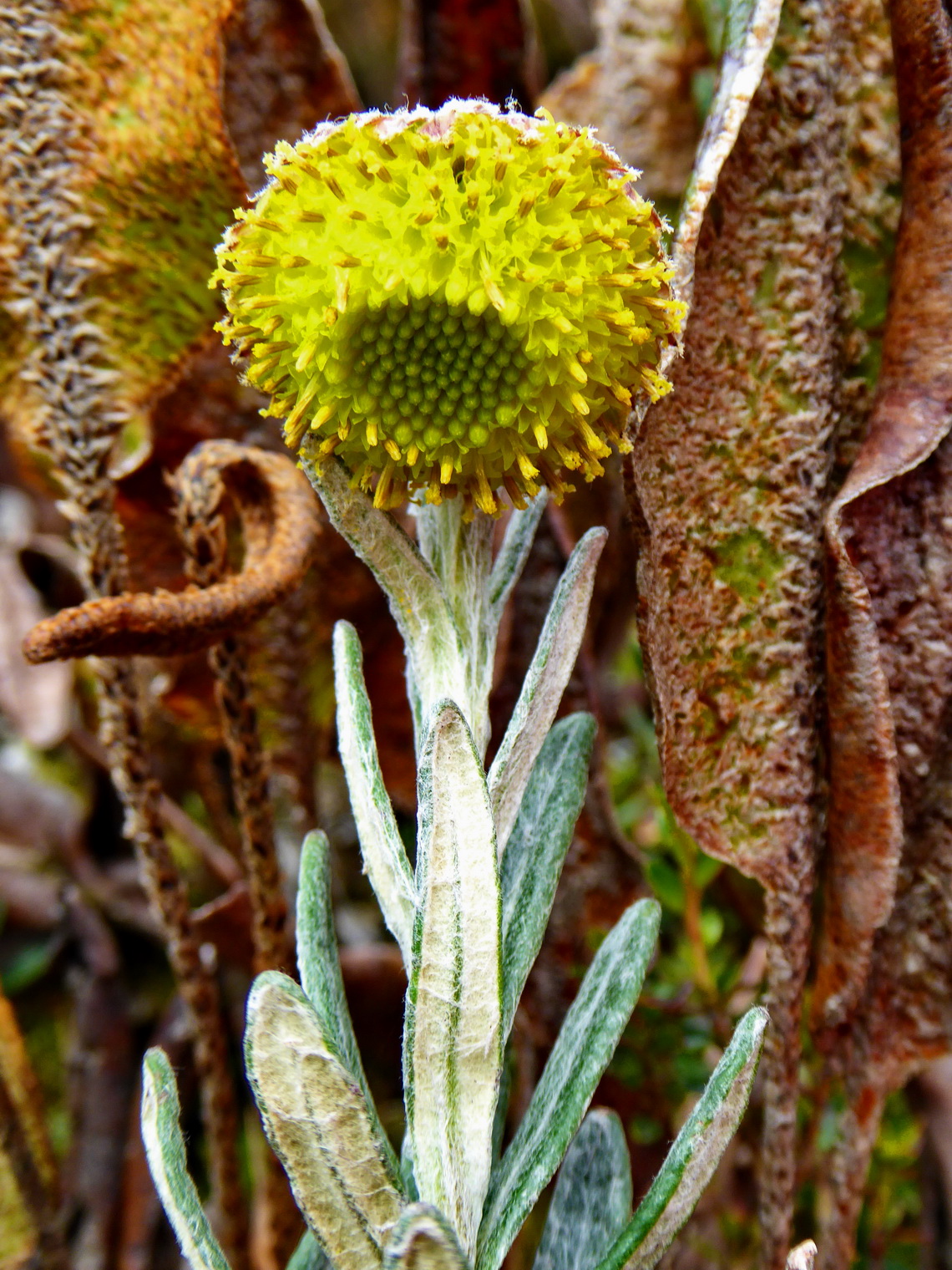 When we came to Popayan our car lost cooling liquid. Root cause was a plastic flange which had broken during the final assembly of our motor in Ibarra three weeks ago, see article Cayambe and Corazon. Alex had glued it two times but the gap has become bigger and bigger on our journey to Popayan. We were lucky because Amazon offered this part and shipped it within one week in the Christmas time from their European central store in Luxembourg to Colombia. In addition we found the beautiful campsite Ecoparque Rayos del Sol few kilometers outside of town on the Panamericana direction Cali (GPS coordinates: N2° 30.731' W76° 32.307'). Thanks to the kind owners Maria and Armando we had an address for the shipment. They supported us tremendously to get the flange out of the local shipping company, which was a little bit weird - Thank you so much Maria and Armado. 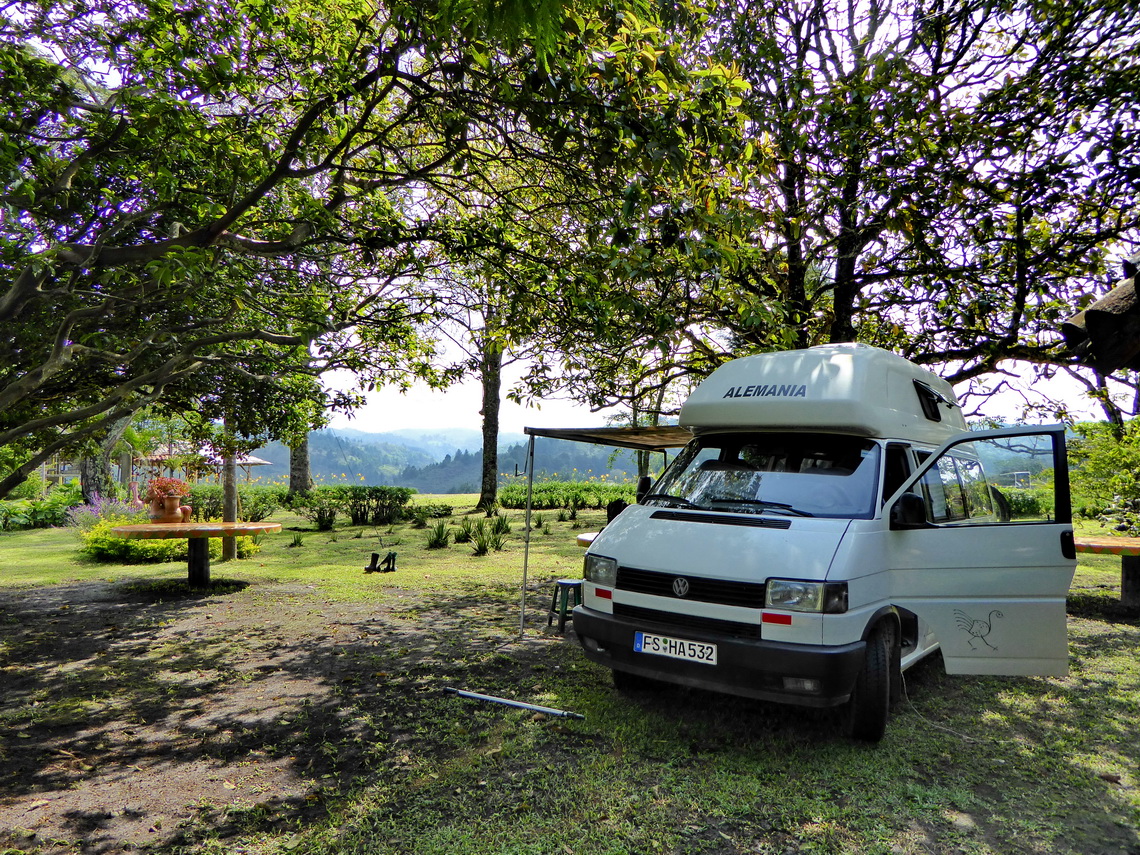 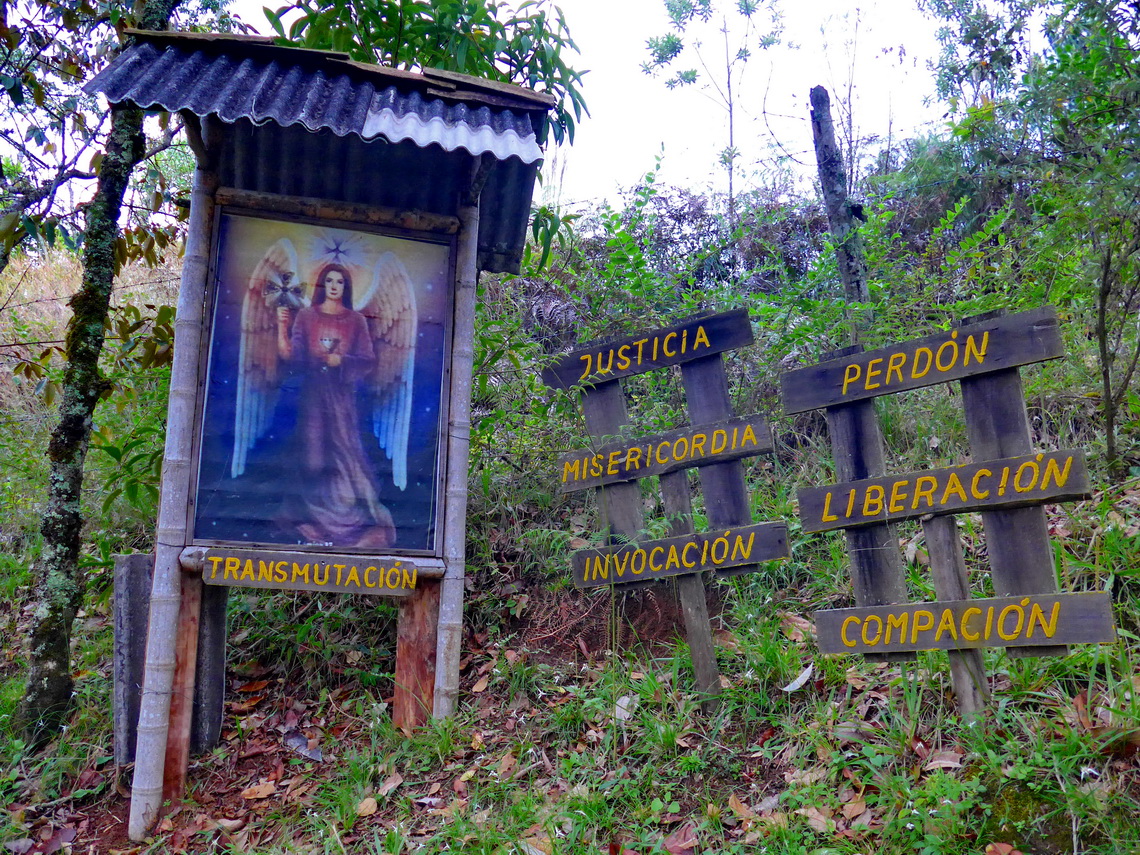 We took a public bus over the bumpy road to San Andrés de Pisimbalá, which needed 8 hours for approximately 120 kilometers. There we stayed in the nice Hostel Portada, where we started the 14 kilometers circuit to the tombs of Tierradentro, a superb hike in a beautific environment. Soon we arrived on the first impressive graves Alto de San Andrés, where a guard opened the graves for us. A long way through a marvelous valley with coffee plants followed to the summit of El Aguacate with a lot of open graves, unguarded. After lunch we continued into the main valley, to two smaller museums before we hiked up to the main tombs of Tierradentro Segovia and El Duende. The graves are up to 7 meters wide and up 9 meters deep in the earth. Archaeologists believe that the tombs had been built between the 7th and 9th century AD, but it is not proved. This track is included in the GPS coordinates file of Colombia. 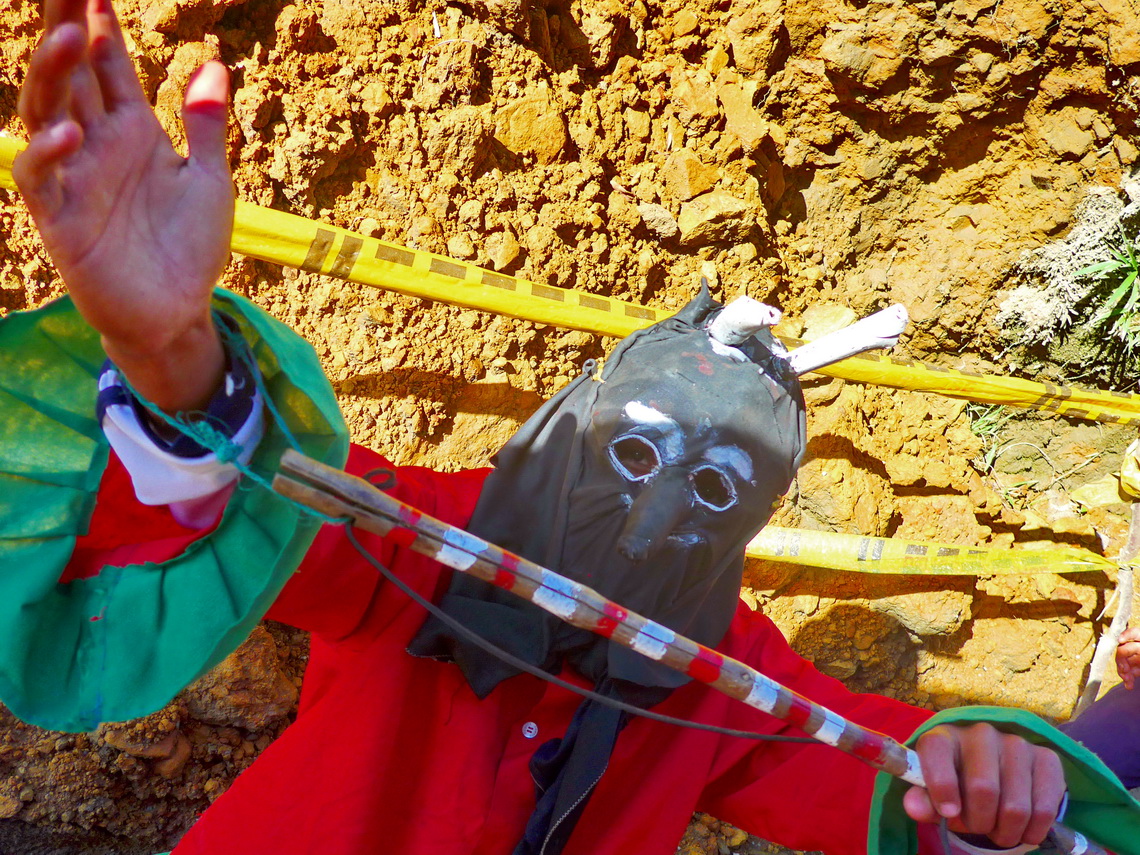 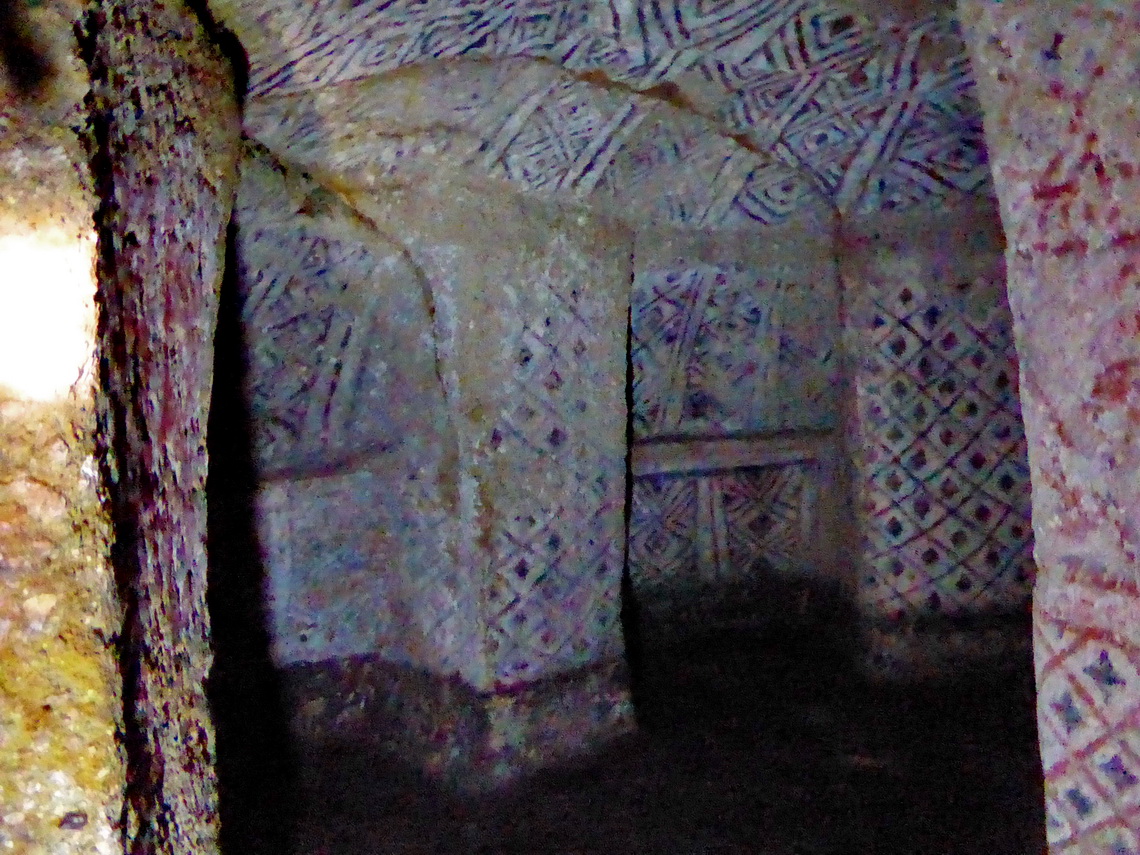 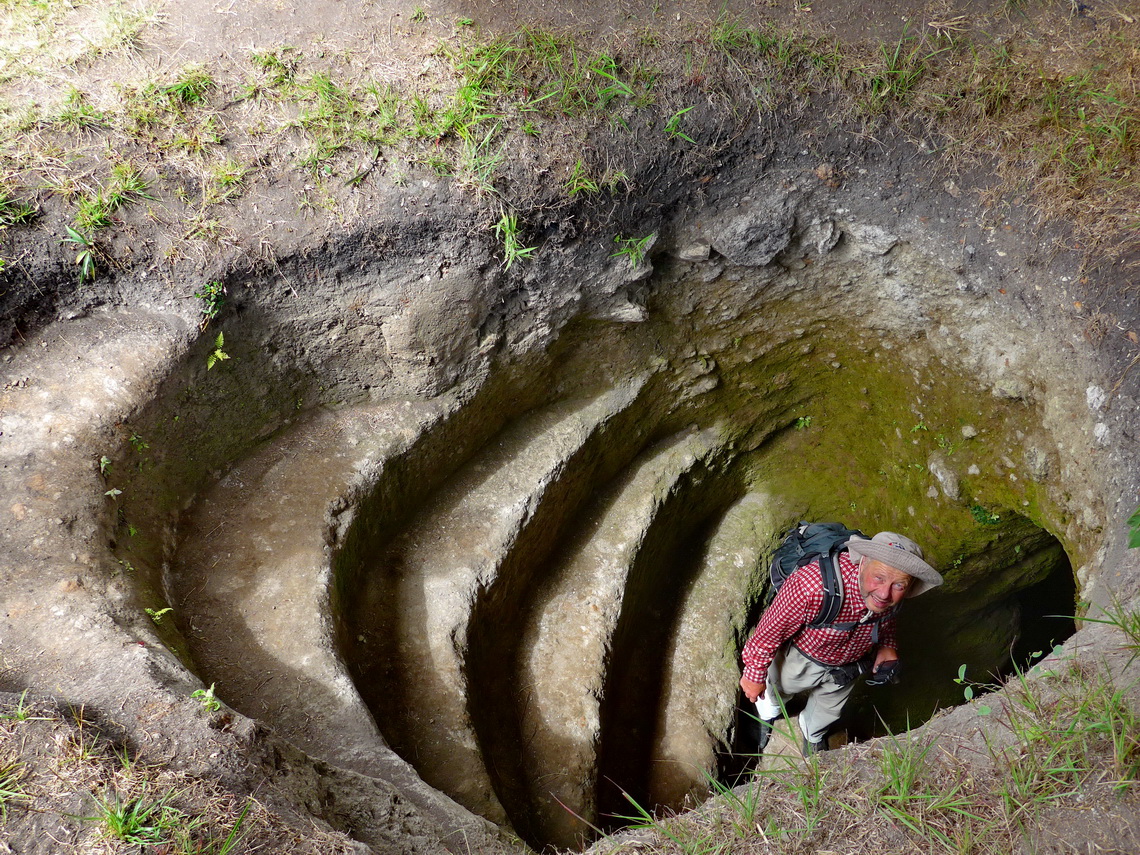 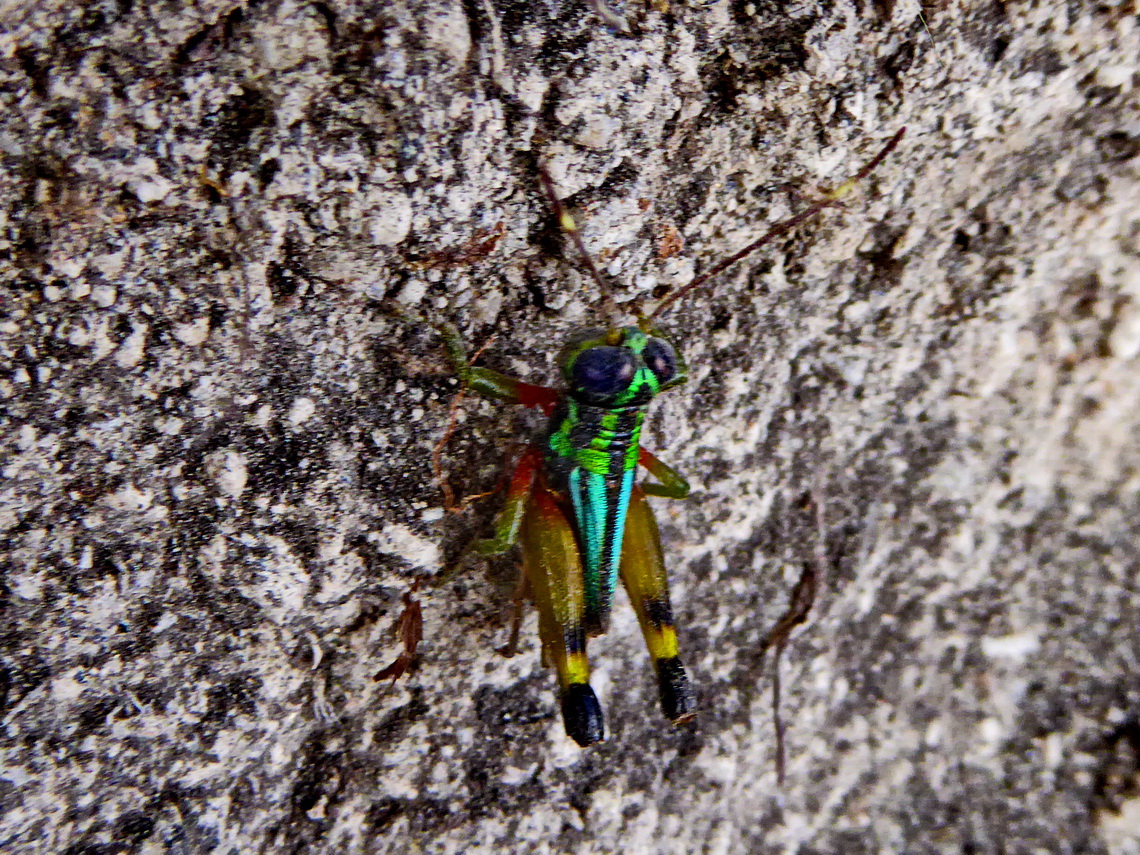 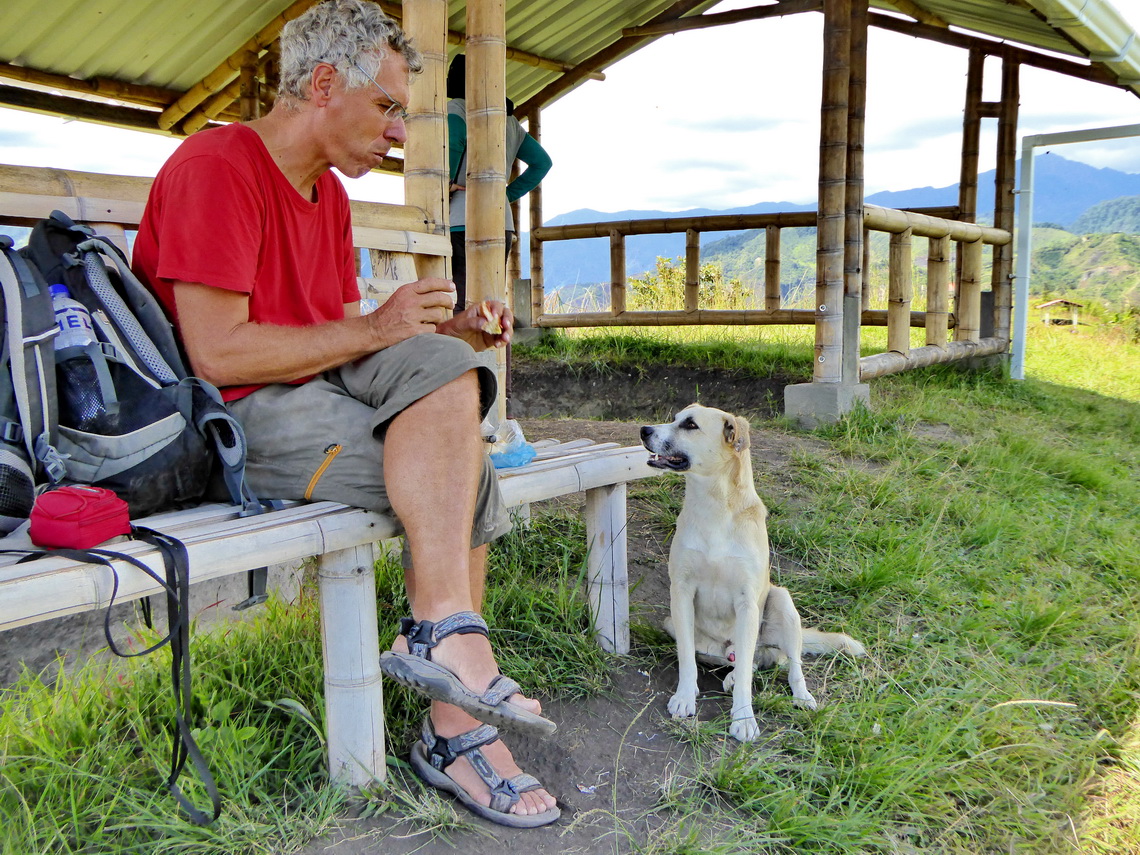 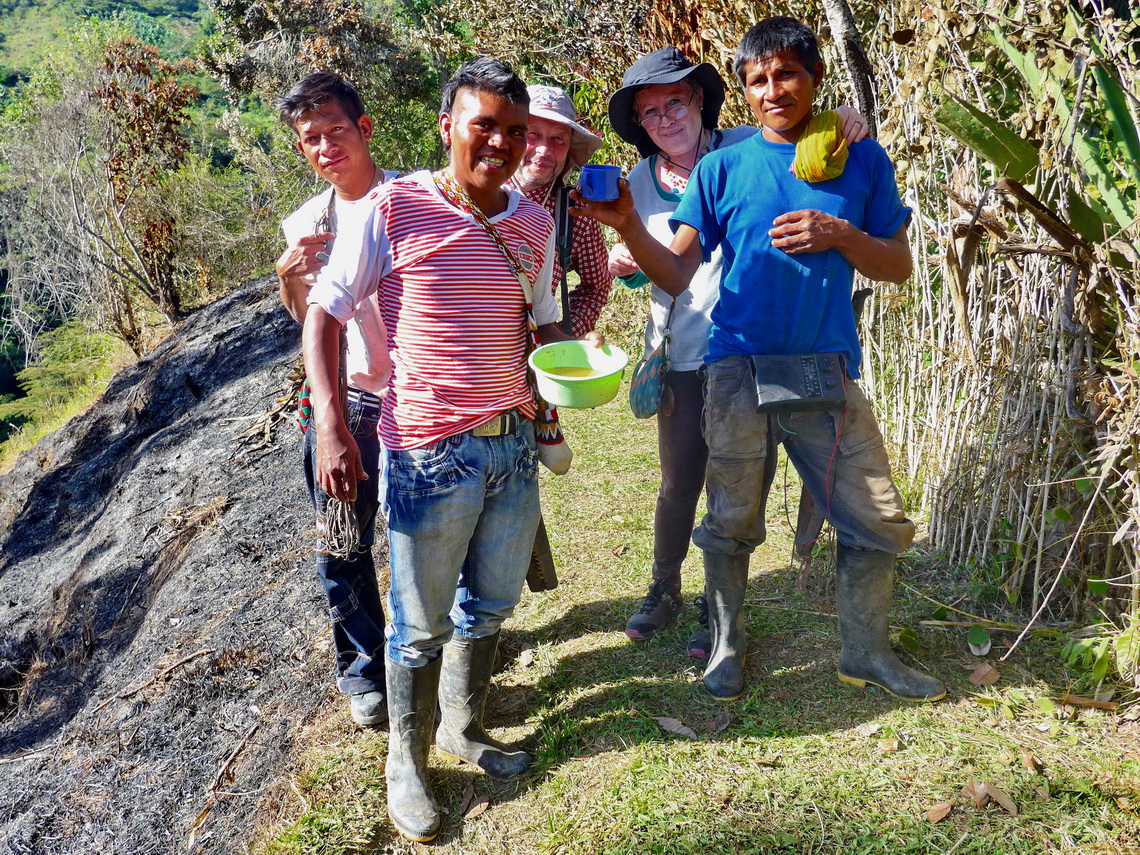 In the evening we were really tired of tombs! Early next morning on Xmas 2014 we intended to go to San Agustin. We wanted to take a bus to the next bigger town La Plata. But it was fully occupied - no chance. The owner of our hostel organized a taxi, which means a little pickup with 8 seats on its back. Soon 16 people were with us - it was really cozy despite the bumpy road. It drove us only to the next village Ricaute. After waiting more than an hour again the same procedure  with an overcrowded pickup to La Plata. Here we hired a real taxi to the bigger town Garzon. The road became better and was partially tarred. In Garzon we could take a normal bus to the district capital Pitalito, where we found soon another bus to San Agustin. Both streets were in reasonable conditions. It's less than 80 kilometers air distance between San Andrés and San Agustin; and maybe 150 kilometers on streets because a rectangle must be driven due to the mountains. We needed more than 11 hours - Welcome to rural Colombia! 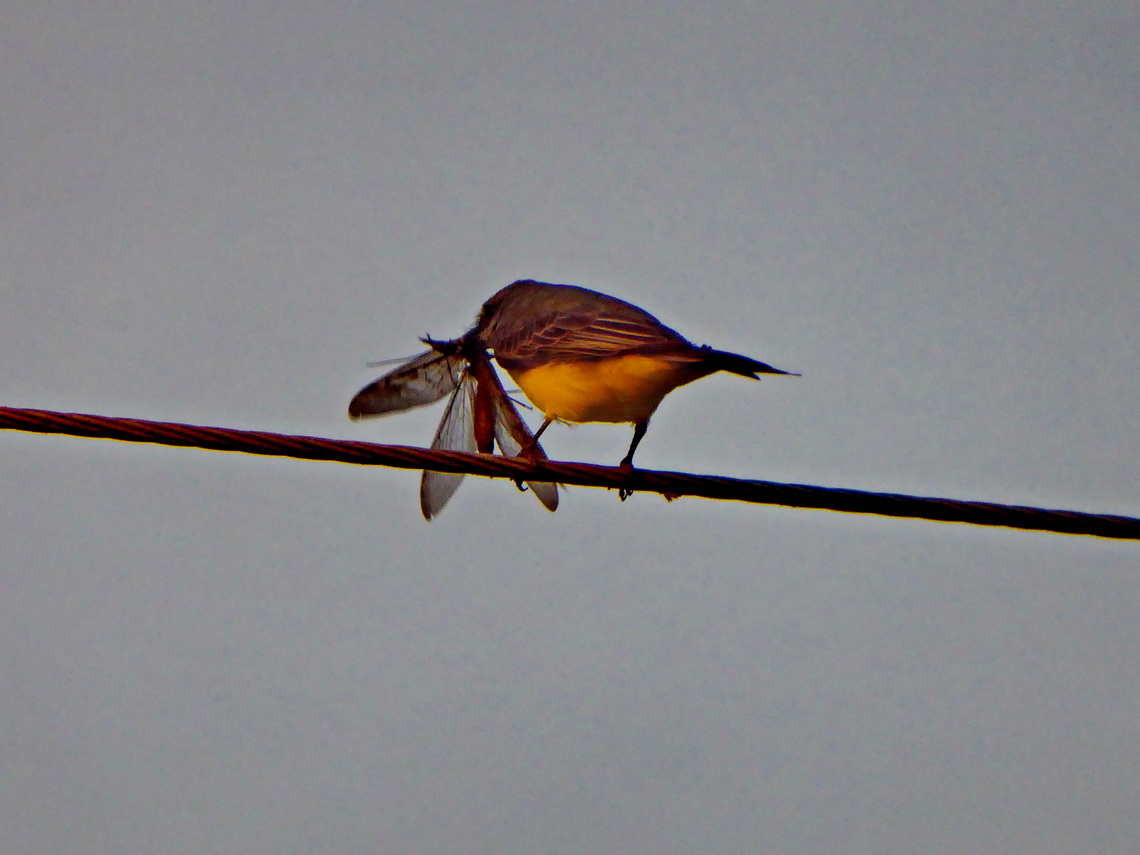 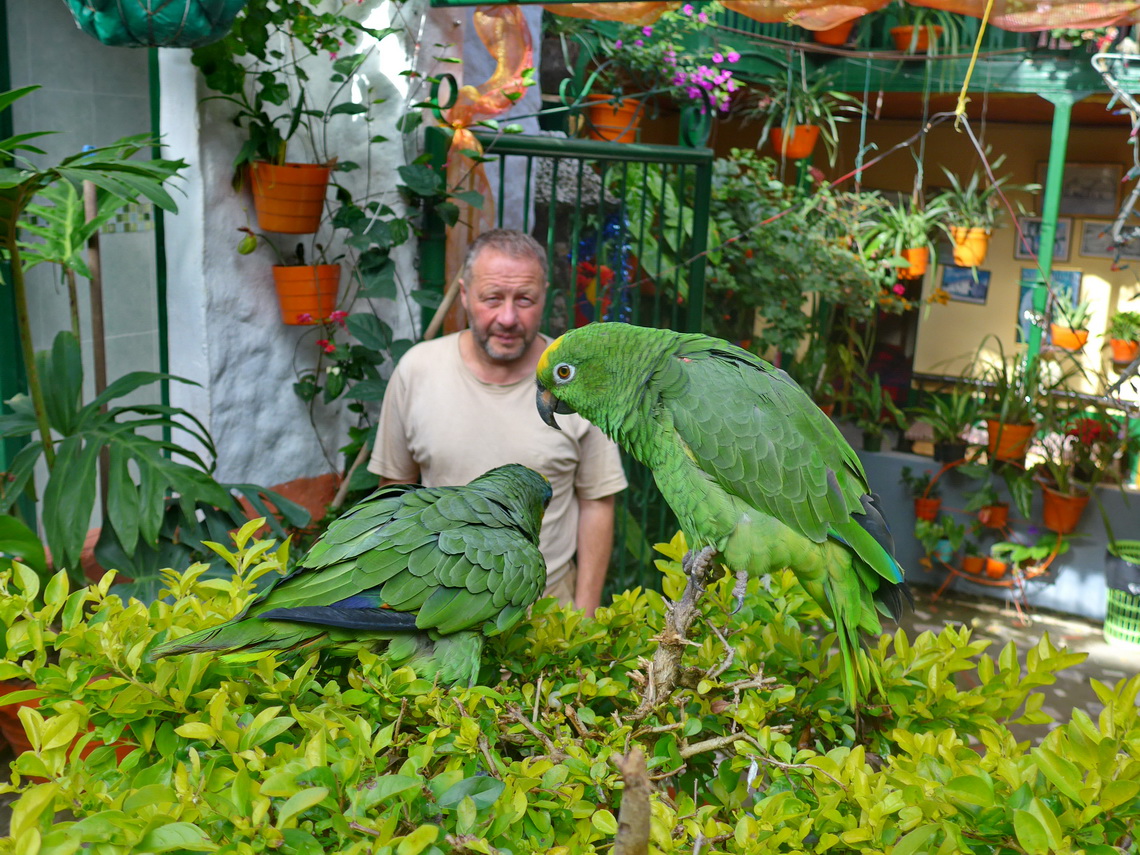 San Agustin is the most important archaeological site of Colombia and consequently a major tourist destination with all facilities. The San Agustin had been existed between 3000 BC and 1100 AD, more than 4000 years and 5000 years old! The people had made huge, monolithic effigies with stone. The biggest one is 7 meters high. Up to now 313 effigies are known. San Agustin had been a commercial center on the headwaters of the river Rio Magdalena. Their people had traded as well with the Amazon region as with the Pacific coast. Unfortunately most of the better preserved effigies are replicas because the originals are in museums, mainly in Bogota. 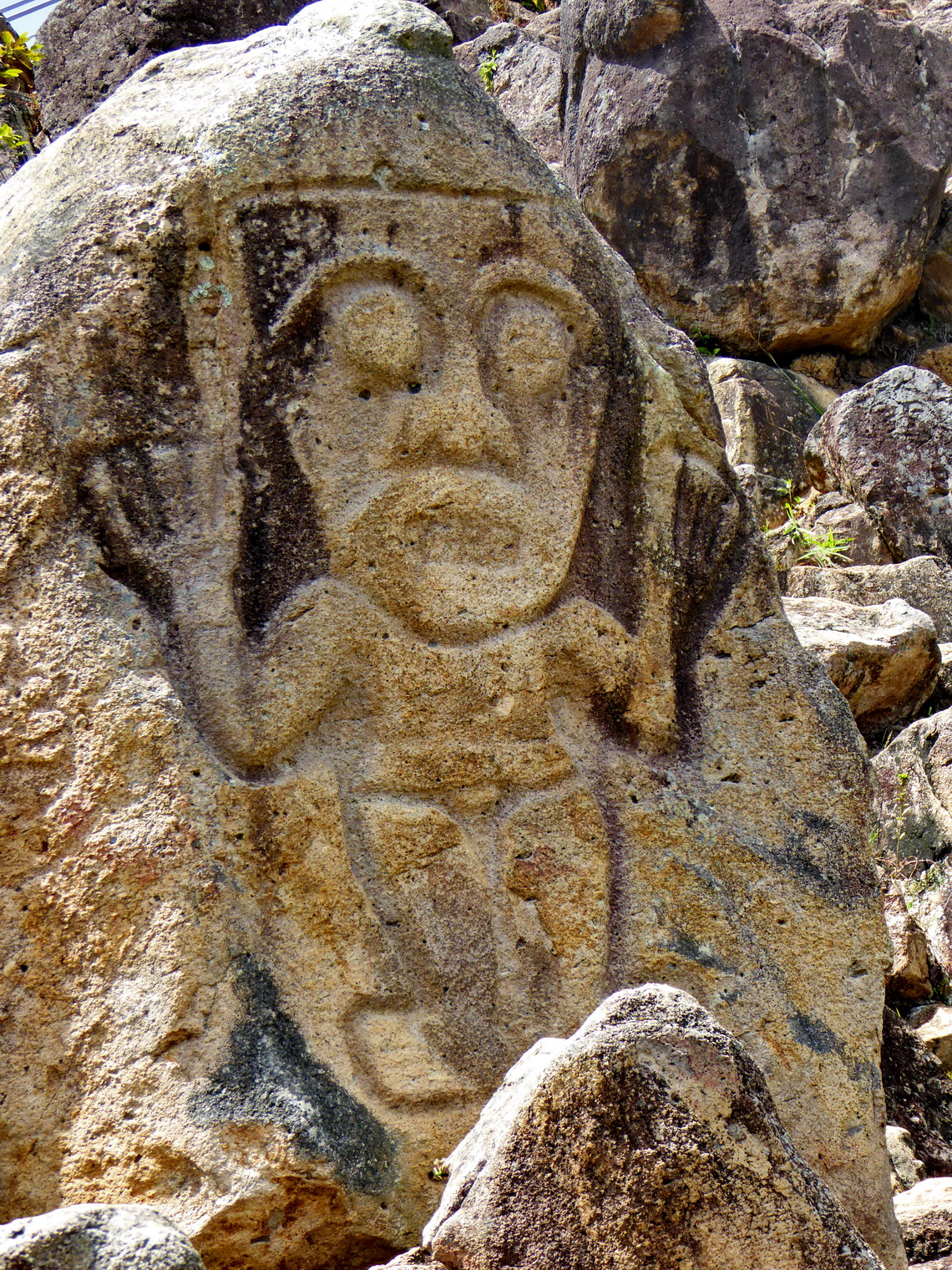 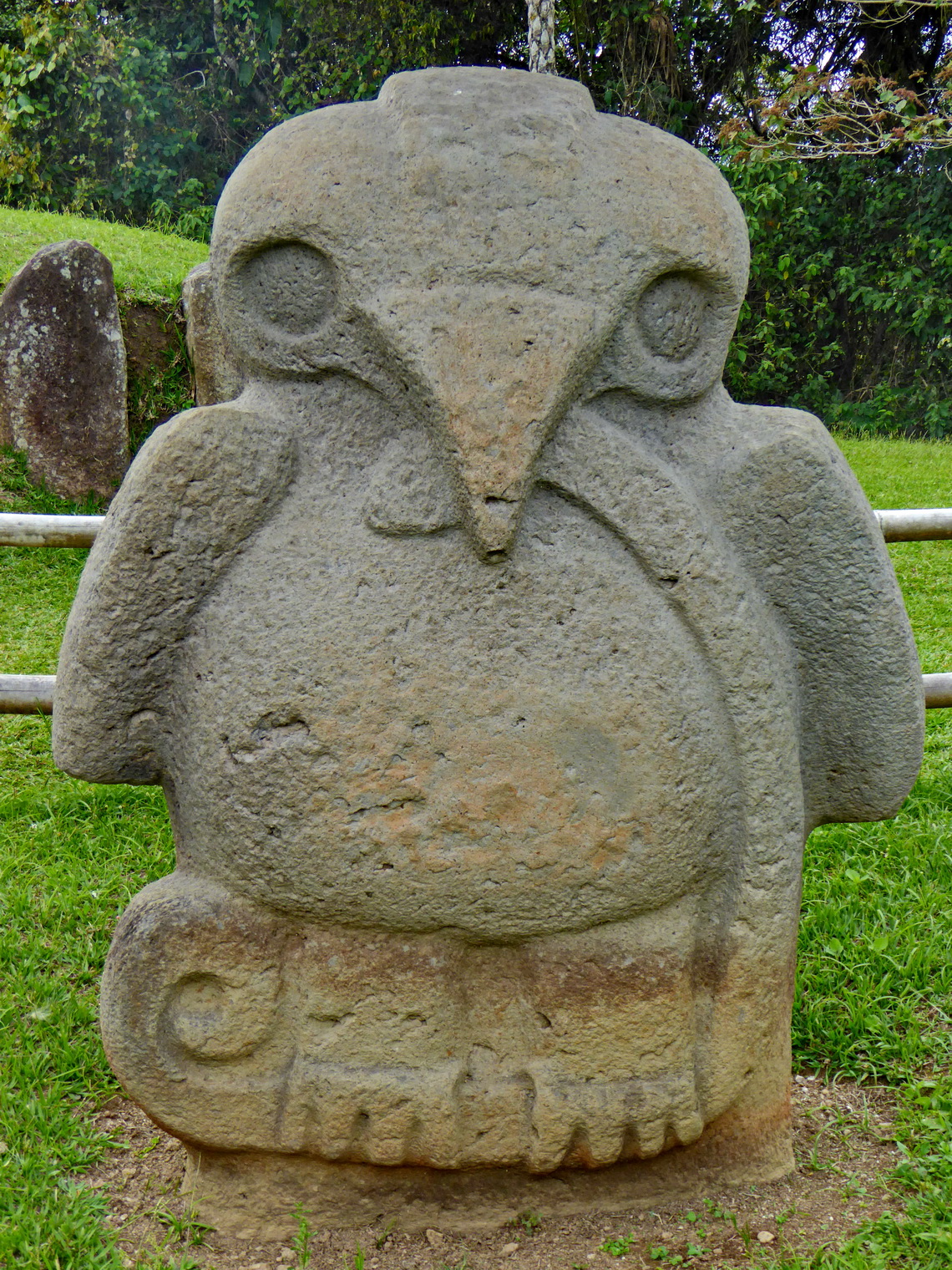 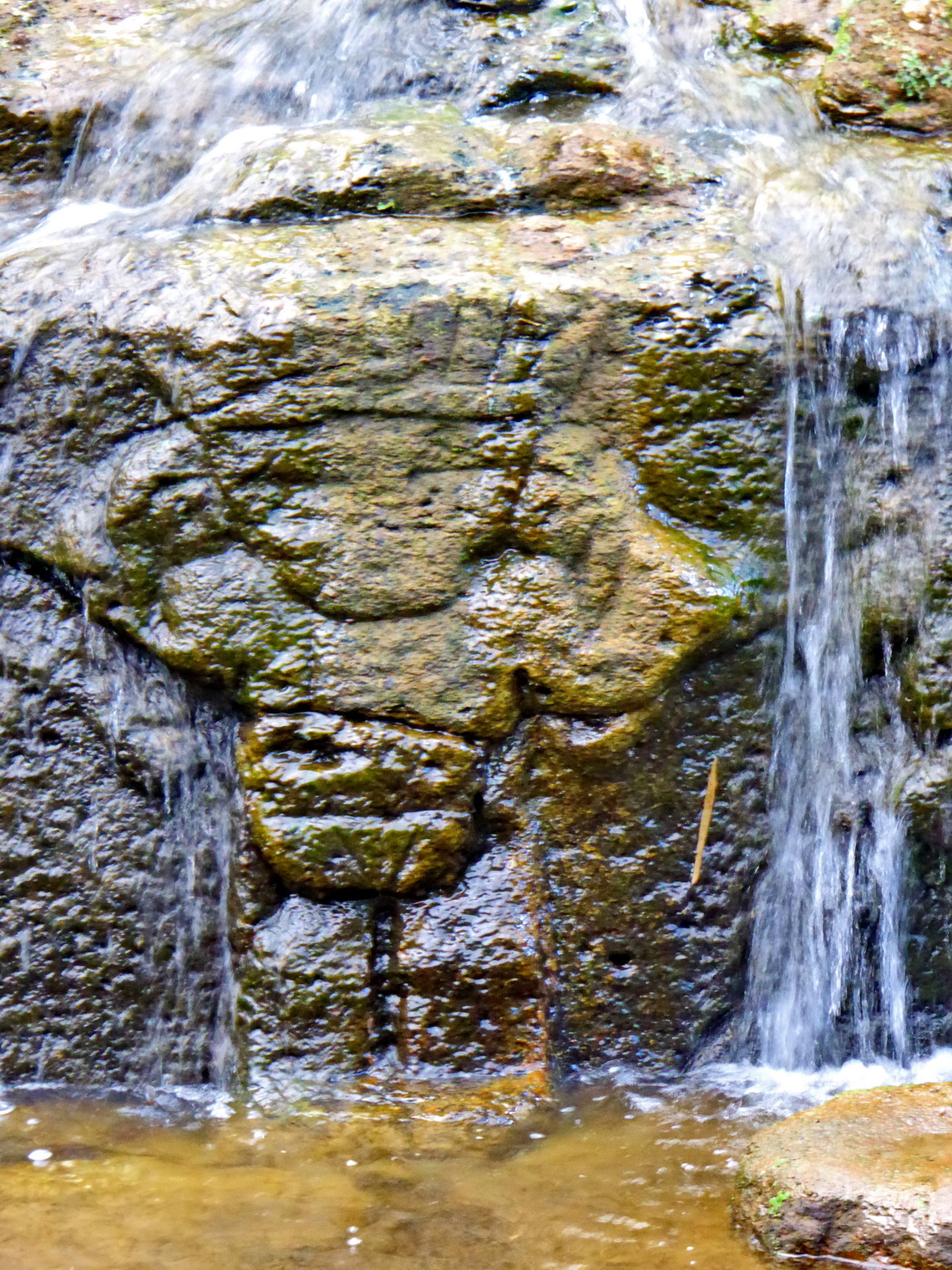 Today San Agustin is a bustling little town of approximately 30,000 inhabitants located on the eastern foot of the Cordillera Central of the Andes in a fantastic scenery. This region is also famous for its nature treasures like the Estrecho de Rio Magdalena - a bottleneck where the mighty river narrows to 170 centimeters! The archaeological sites with the effigies, again tombs and sculptures are spread in several parks around San Agustin and its neighborhood. We walked the road to the Estrecho de Rio Magdalena and were lucky that somebody took us back the 12 kilometers into town. Another superb hike was from San Agustin via the deep gorge of Rio Magdalena directly to the archaeological park Alto de los Idolos. From the nearby town San Jose de Isnos we took public transportation back to San Agustin. This track is included in the GPS coordinates file of Colombia. 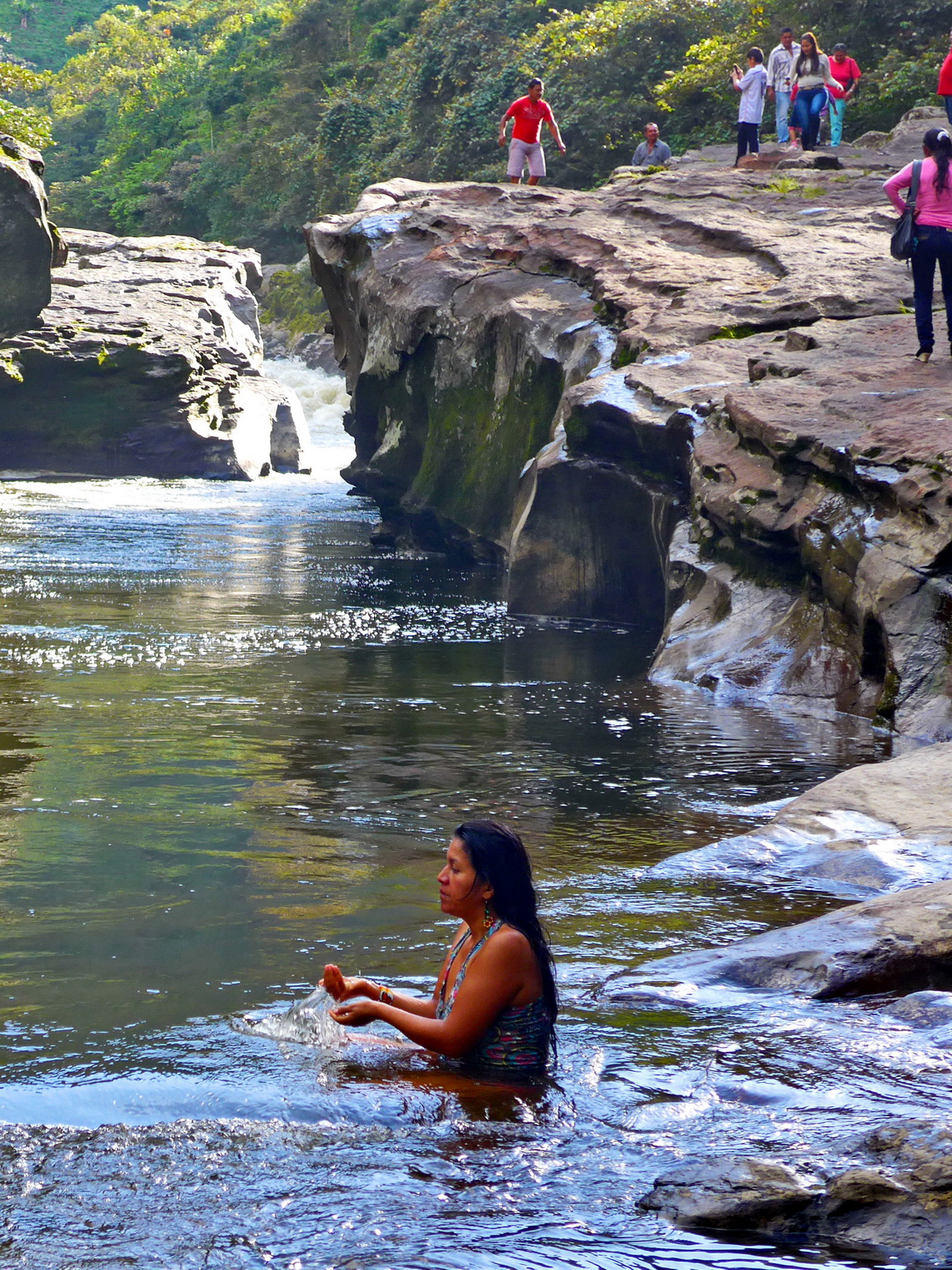 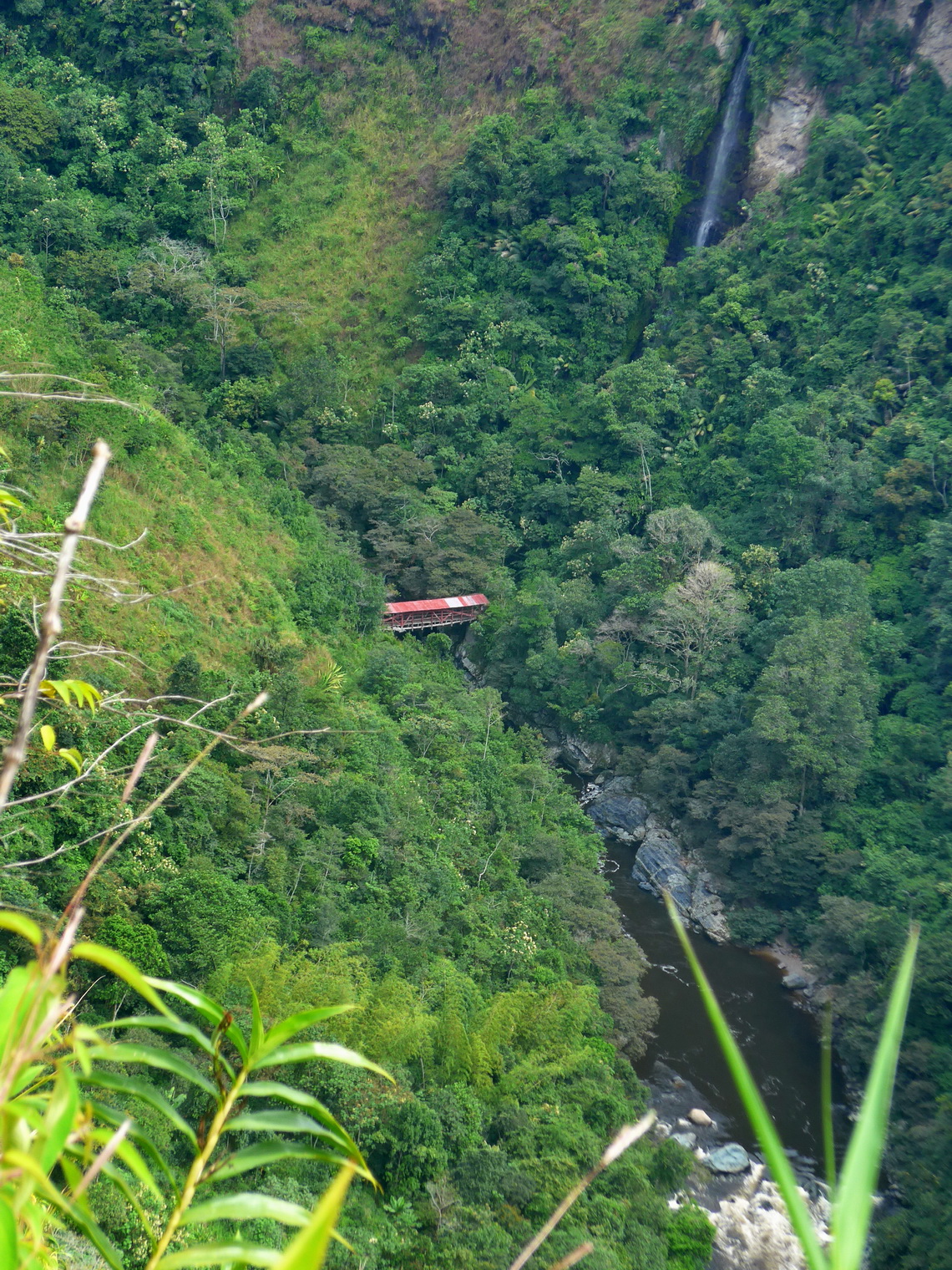 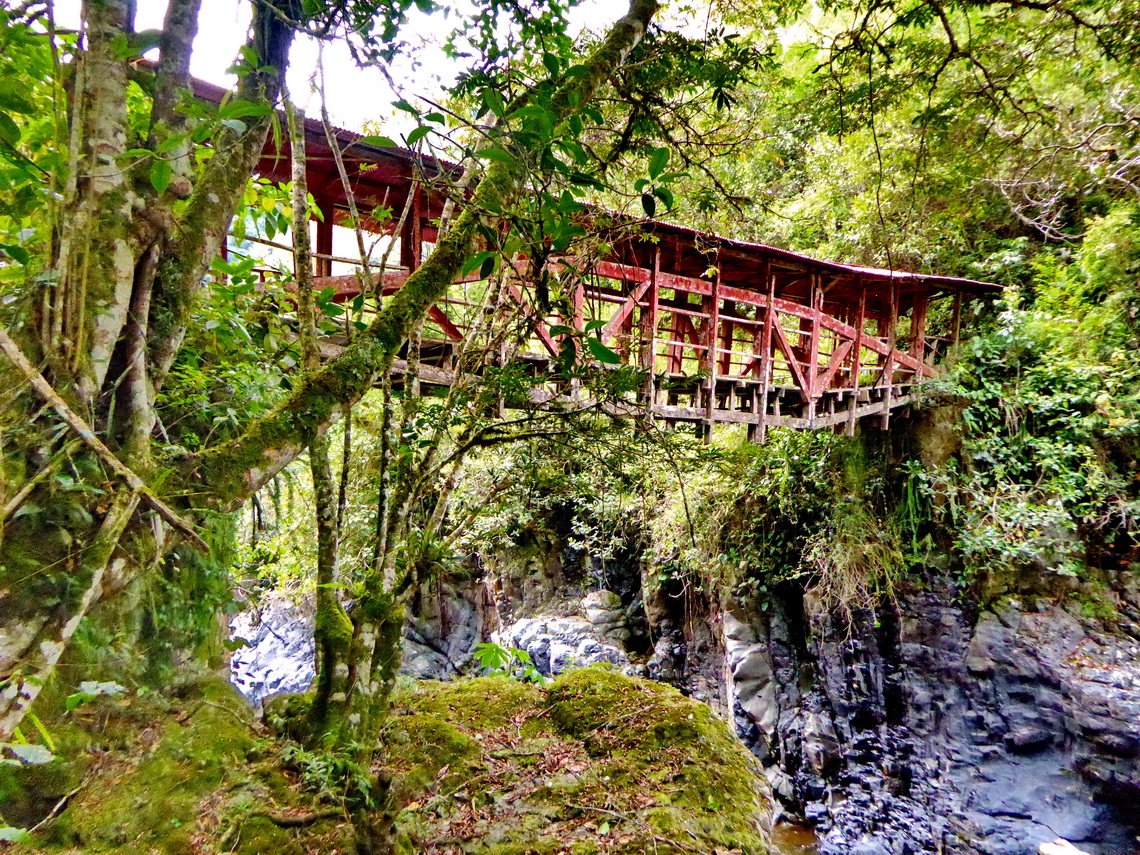 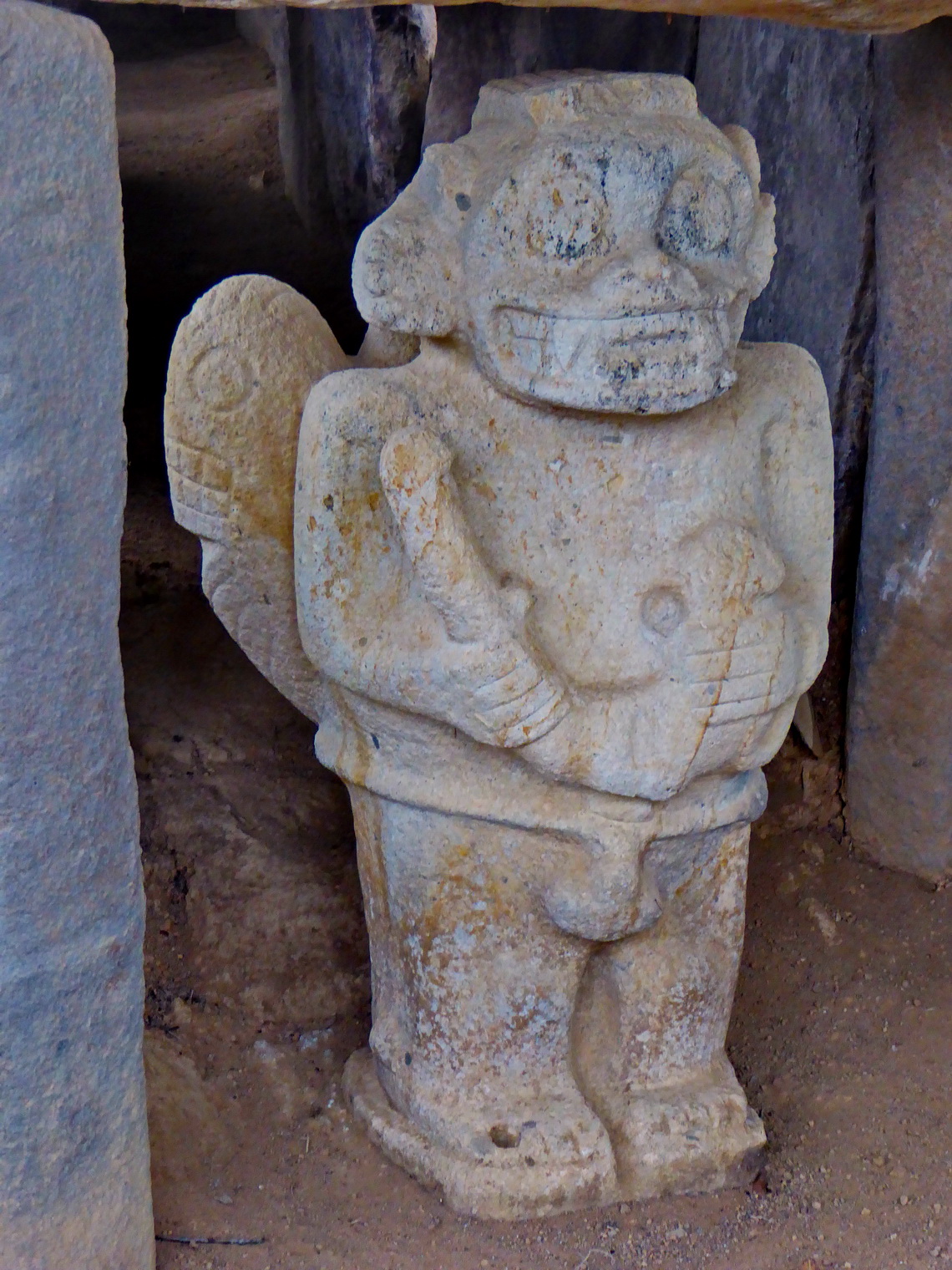 On the way back to our car we stopped at the hot springs Agua Tibia in Coconuco on the western foot of Nevado Puracé, which is an excellent place for camping, also with motor-homes (GPS coordinates: N2° 18.367' W76° 30.442'). 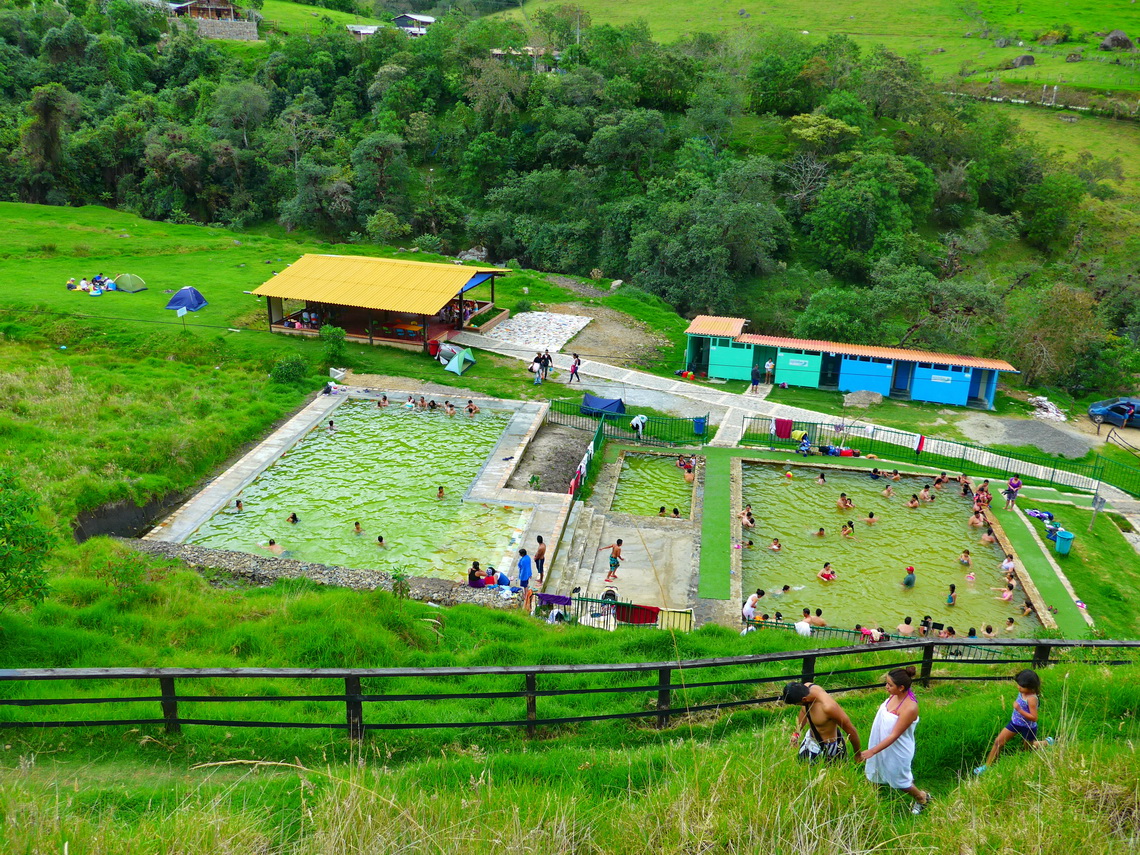 After we had assembled the new flange into our car we dared to drive the bumpy dirt road to the volcano Nevado Puracé. Before we had visited Bavarita - Little Bavaria. We were warmly welcomed by Franz, who had migrated from Garmisch Partenkirchen in the very south of Germany to Popayan. Like us he loves mountains and he gave us many valuable hints about the Sierra Nevada El Cocuy, which was our next major destination. We had a lot of fun all together - Thank you so much Franz.

At 2:00 AM of the New Year's Day 2015 we started the long and challenging hike to Nevado Puracé. There was storm on the crater rim, partially we had to walk with all four extremities. At sunrise we achieved a false peak and we wanted to return. Surprisingly the wind became a little bit less fierce and we dared to continue to the main summit and to circle the whole huge crater. This track is included in the GPS coordinates file of Colombia. 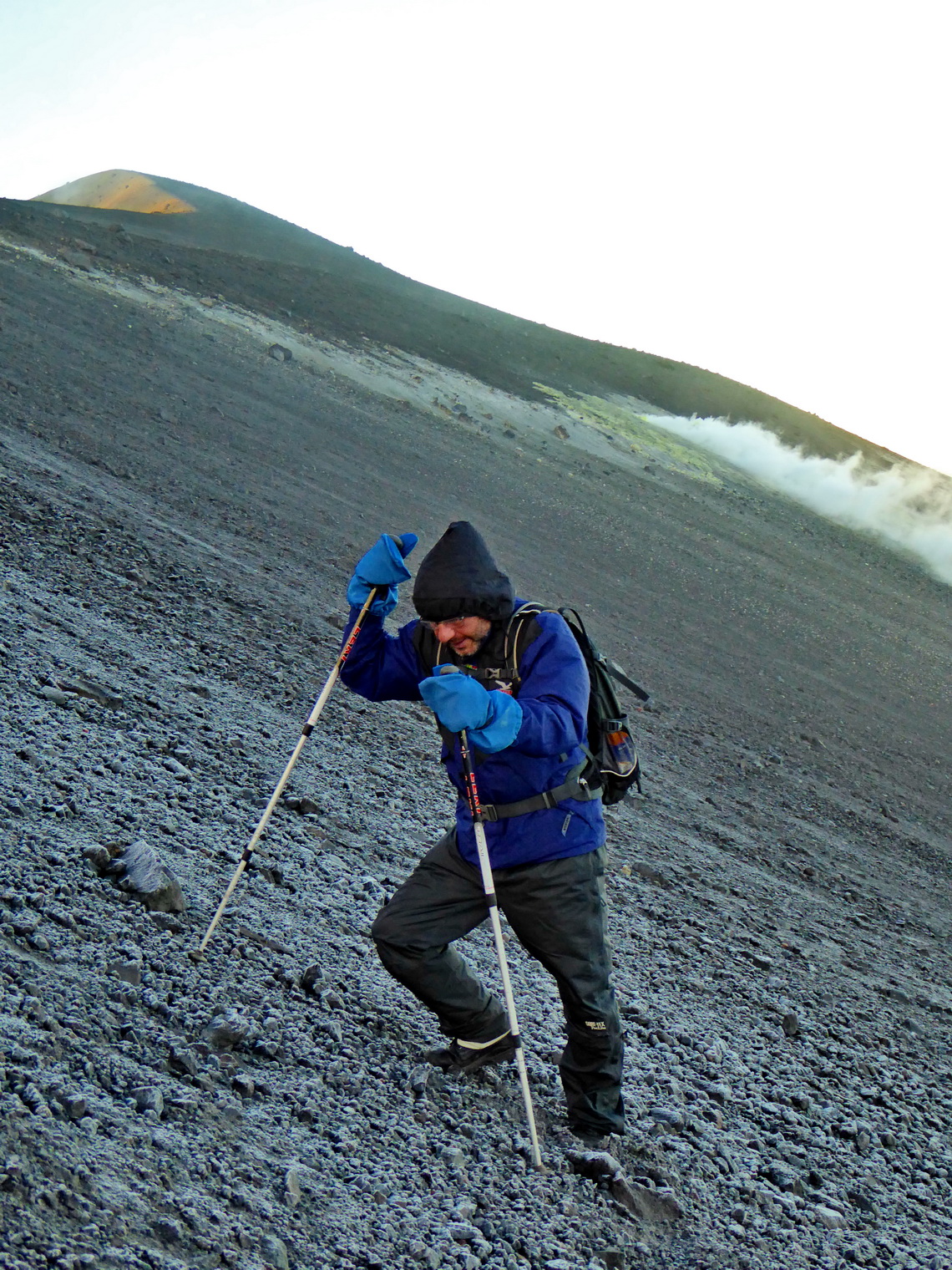 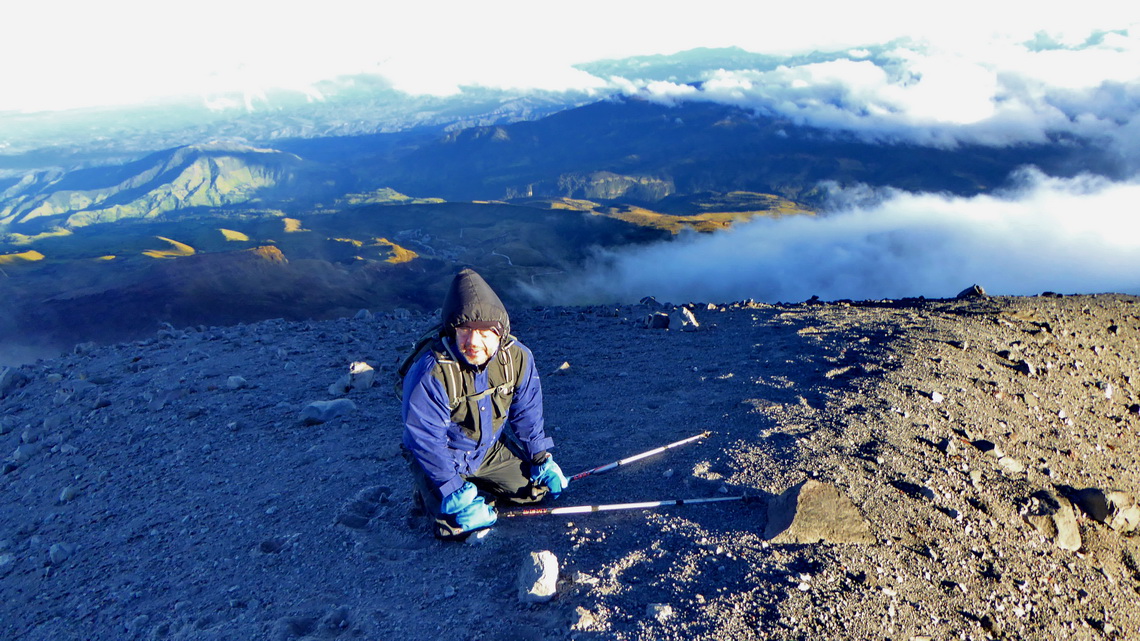 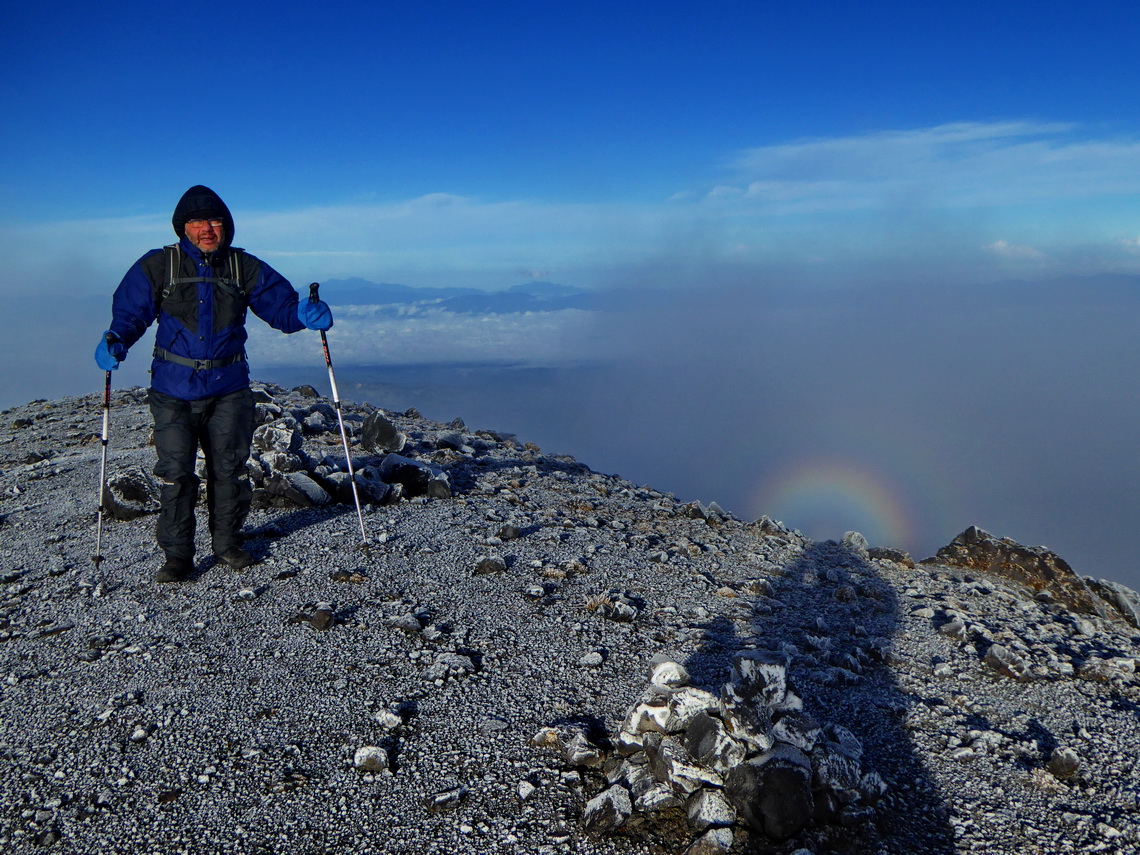 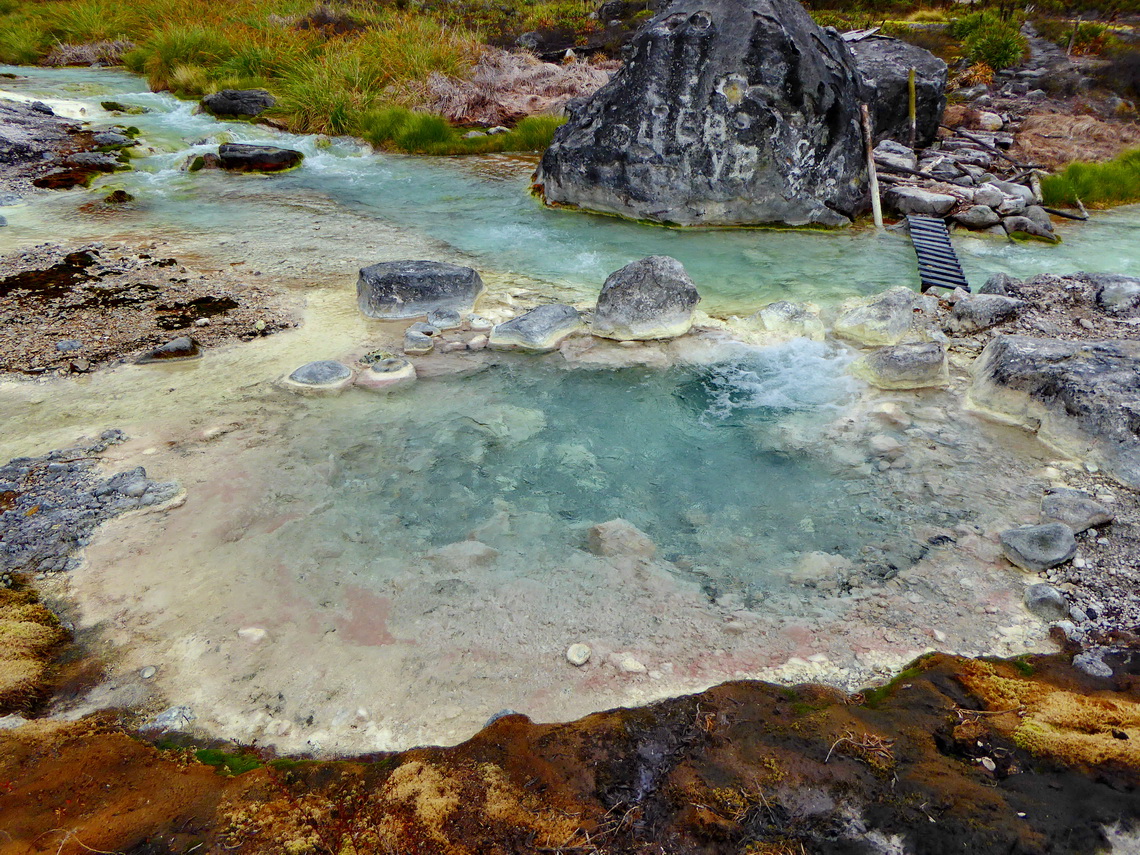 On the long drive to the Sierra Nevada El Cocuy we visited the hot desert Desierto de Tatacoa in the Rio Magdalena valley and the lush Parque Nacional Chicaque, which is located 30 kilometers west of Bogota. Both have excellent camping opportunities. In the desert we stayed on the campsite El Peñon de Constantino (GPS coordinates: N3° 14.448' W75° 09.431') with a refreshing pool, supplied by natural water of the desert! The latter one was closed when we arrived late in the evening, thus we spent the night in front of the gate (GPS coordinates: N4° 35.867' W74° 16.904'). Parque Nacional Chicaque provides some nice hiking trails and we were very lucky with the weather, which is usually very foggy and rainy. In March 2014 we had been here with Vera and Kai without any visibility. This time we could see the whole range of the Parque Nacional Natural Los Nevados including majestic Nevado del Tolima which we had climbed up one year ago, see article Nevado del Tolima and Farallones de Cali. 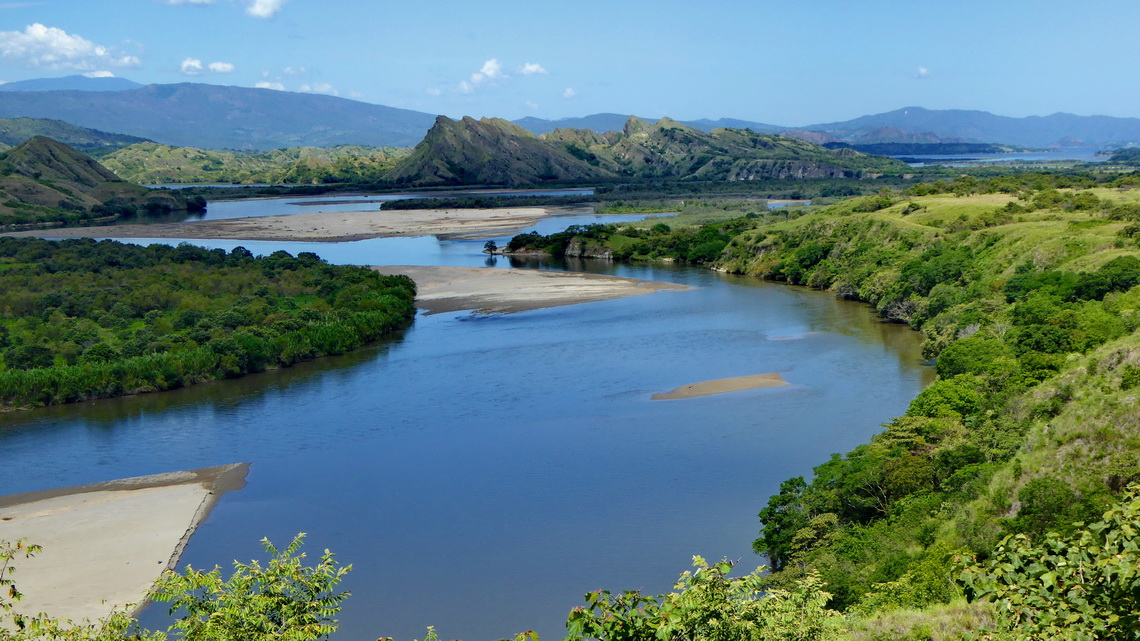 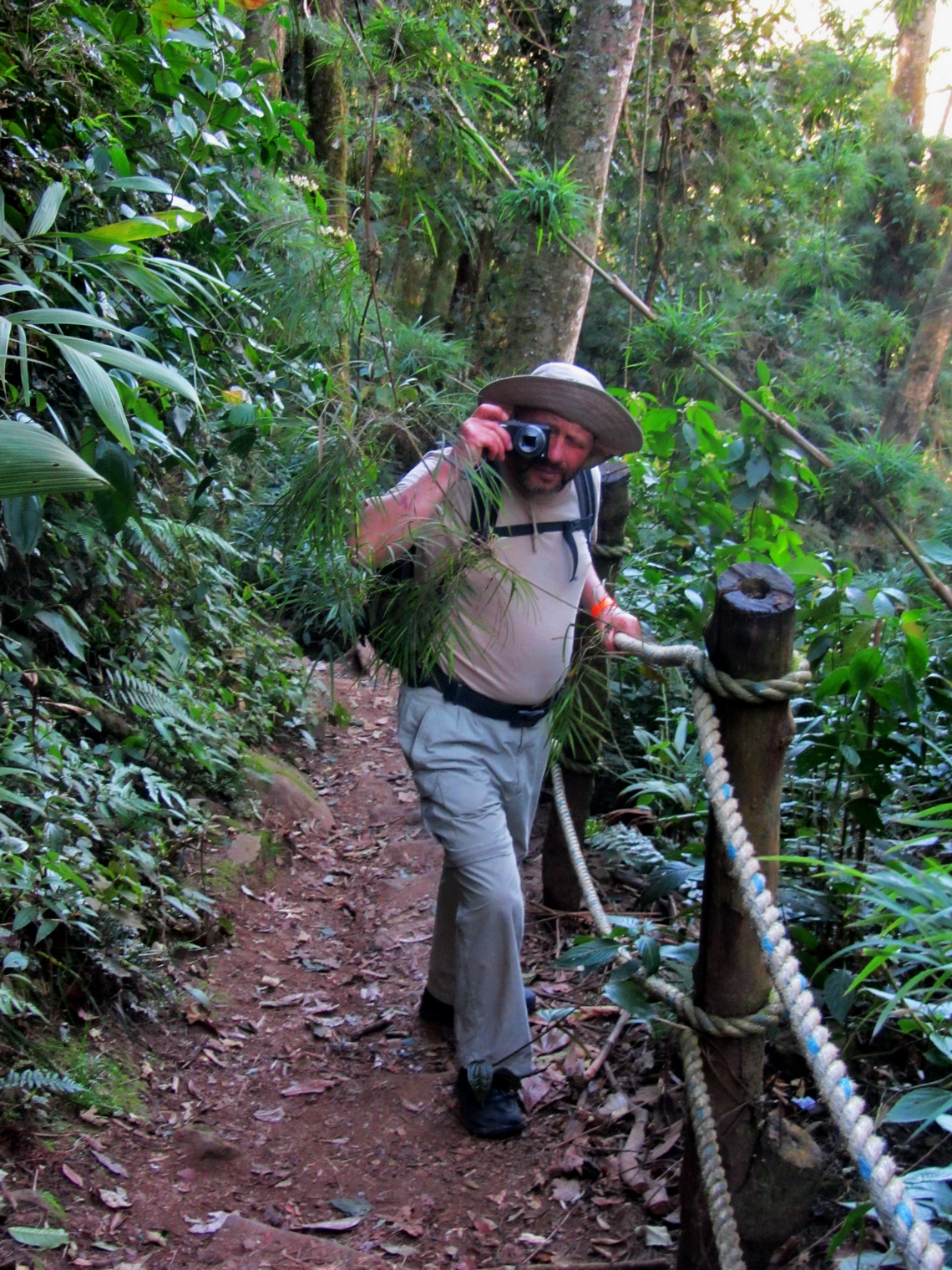