In Jontunheimen are the tallest peaks of Scandinavia up to close 2,500 meters sea-level. This sounds not very high for alpine standards but you have to take into mind that you are much closer to the North Pole. Jontunheimen has some steep, needle-like pinnacles embedded by enormous glaciers and huge lakes. Besides the thinner air these mountains equals summits with 3,300 meters and more sea-level in the Alps. 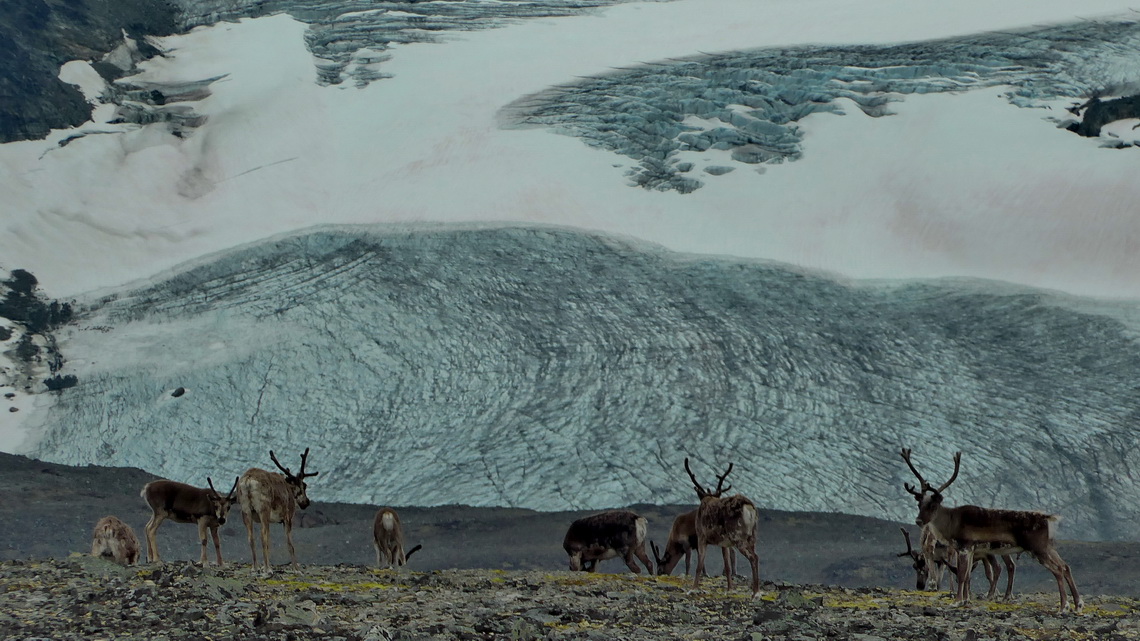 We decided to head along the eastern side of Jontunheimen because the weather forecast was bad as usual for its western part where the clouds of the northern Atlantic Ocean hit the mountains and stick there.

Basically the same hints like in the previous article about Norway West - South of Sognefjorden are valid. For some mountains crampons and ice-picks are recommended. The data of all the mountain hikes in this article are included in our GPS coordinates file of Norway.

We started our first tour from the 1300 meters high saddle of the toll road between the lake Vangsmjøse (southwestern end) and Beitostølen to the northern peak of Belgjinose, 1600 meters sea-level in the late afternoon. Just 300 meters vertical difference sounds like a little tour but we returned to our car when it was almost dark, at 11:00PM. First we walked endless over the fjell followed by scree with bigger rocks but without any visible trail. The saddle is a perfect free camping opportunity but it was remarkable cold in the morning and we used our heating the first time since we had come to Norway.

On the next day we climbed up 1740 meters high Mugnetinden which is quite popular. A good trails leads to its summit where the views stunning because Mugnetinden is the tallest peak of this sub-range. 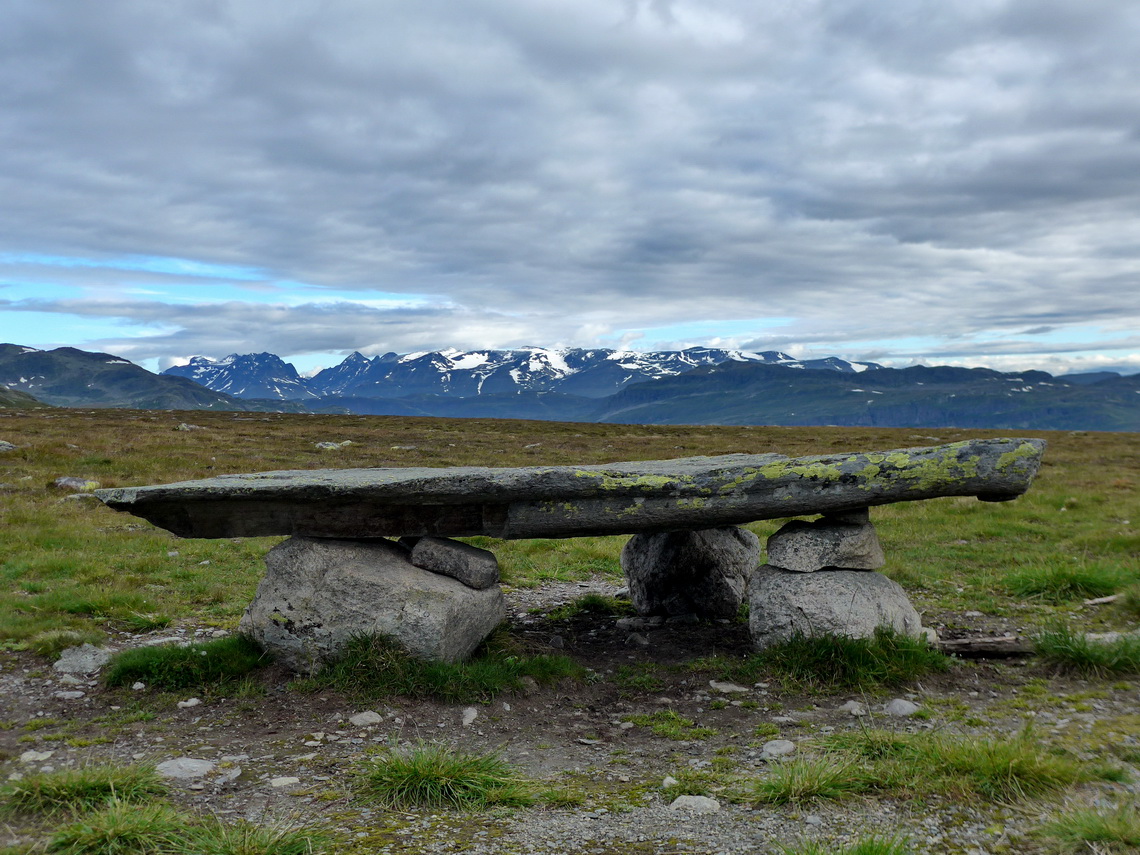 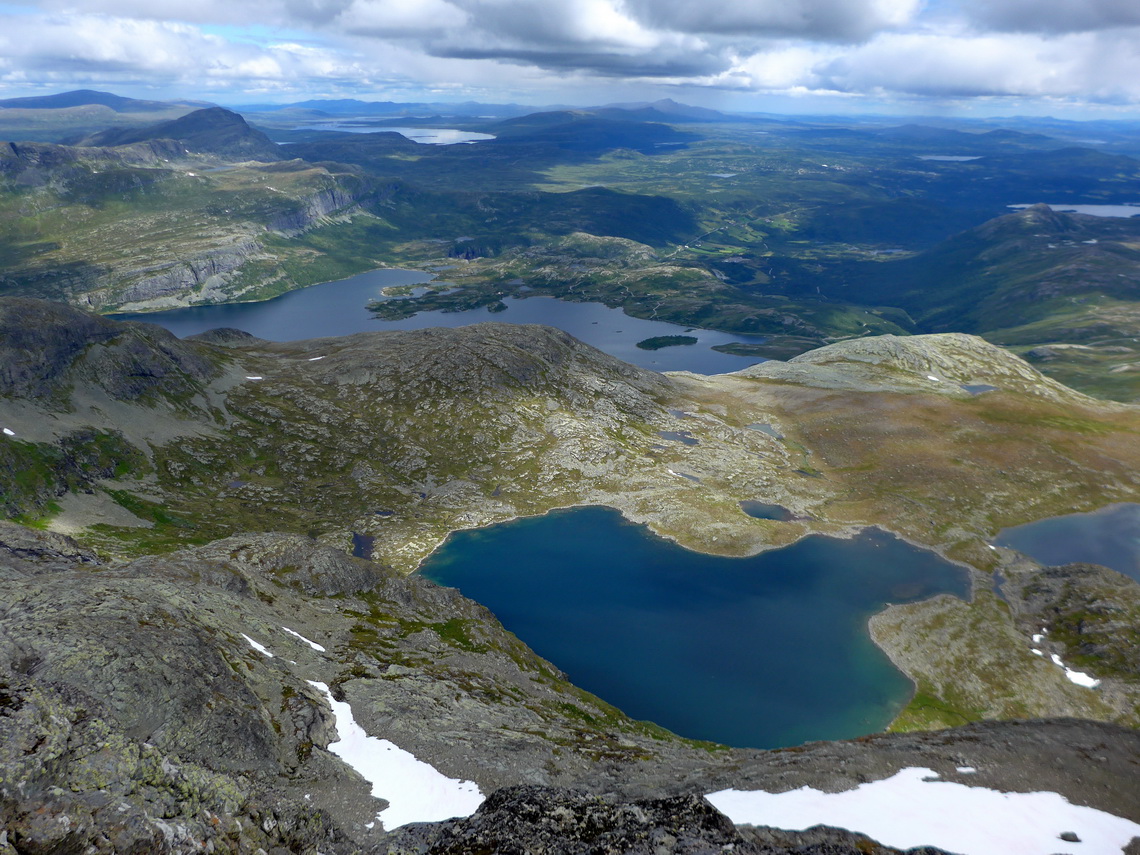 A side story about Lutefisk, the traditional Christmas meal of Scandinavia:

After we had been on Mugnetinden we needed desperately a shop to purchase some food because we had seen on the map that there is no village on street number 51 which leads from South to North along the eastern side of the higher mountains of Jontunheimen. A girl selling brown Norwegian mountain cheese on the street told us that few kilometers ahead of Beitostølen is a good grocery. This shop had nearly everything country people need - from gas to horse equipment. The prices for food was reasonable and we bought a lot. Alfred loves sea-food and there was a discount of frozen white fish. We asked the Lady in the shop if the fish is good and she mentioned yes but cook very long. She barely spoke English (but much better than our Norwegian).

After shopping we were very hungry when we came to the starting point of our next tour, again a saddle at 1,300 meters sea-level. We followed the recommendation of the Lady in the shop and cooked the fish long, very long. The air in the car became weird. Of course we opened the windows but few minutes later it smelled awfully. However the white fish looked promising. Marion took just one bite and refused to eat more. Alfred tried to finish his plate which was a challenging task.

On the packaging bag of the fish we found a hand-written label Lutefisk. We were curious if we might survive this meal and searched in the Internet. First the good fish will be "dried" in the cold, wet and rainy air of Norway's northern coast. After several months the rotten fish will be pickled into caustic soda. Usually caustic soda is used to clean tubes - it is really not a healthy product. There is an interesting story about Lutefisk in mare online - Viagra für Wikinger - Viagra for Vikings (in German). We laughed ourselves to tears but we have definitely no intention to try it again.

Afterwards we walked to the little mountain in the East, called Fisketjernnuten - fish peak. Finally we survived Lutefisk without any major damages.

Opposite of Fisketjernnuten on the other side of the street is the trail to 2105 meters high Rasletinden, our first mountain above 2000 meters sea-level and a dream tour. We started relatively early in the sun but had fog and mist when we arrived at the secondary peak Øystre Rasletinden. After spending few minutes on the main summit it became sunny again. Alfred decided to continue and the weather became better and better. Finally he returned on 2178 meters Austre Kalvehøgde which was a little bit tricky because of large snow corniche on its northeastern ridge - six summits over 2000 meters in one day! 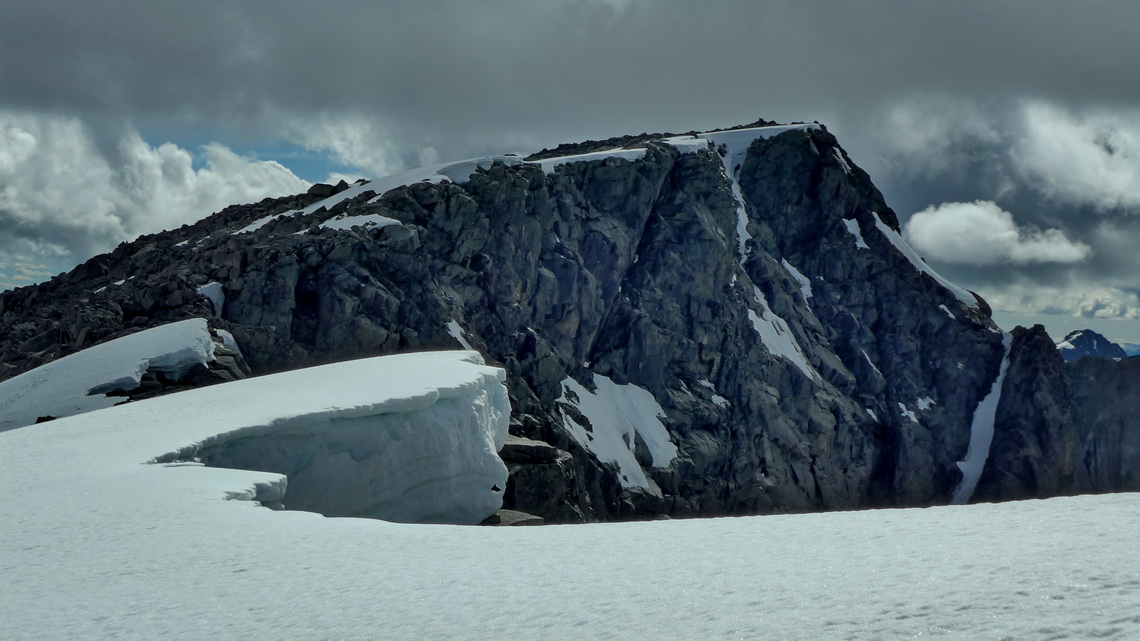 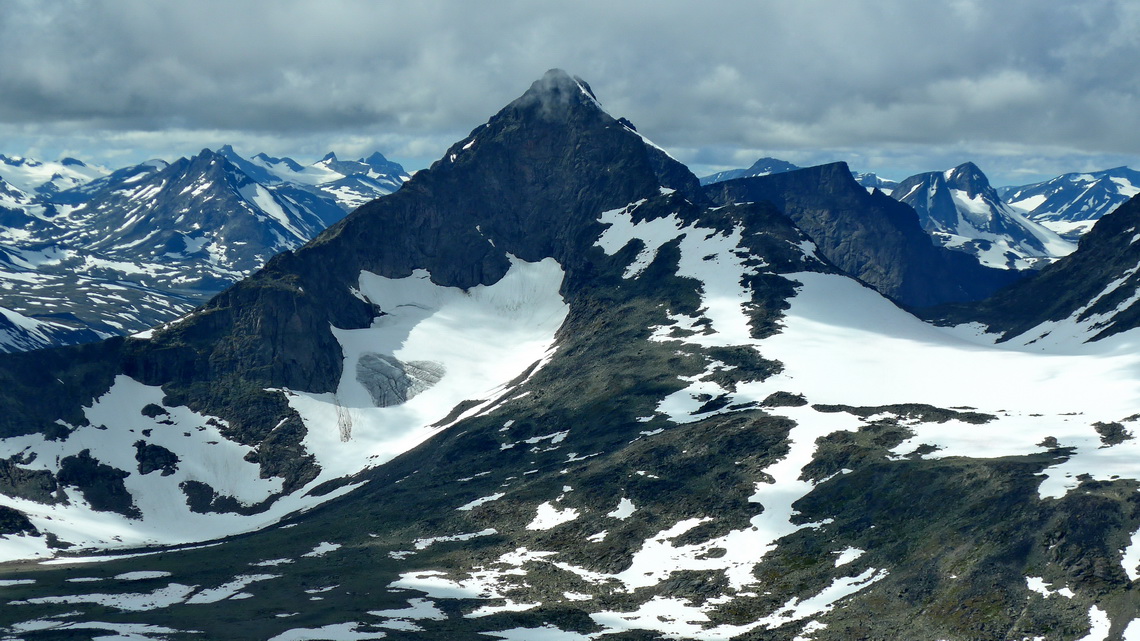 When he returned to lower levels on the main trail to the saddle the streams contain a lot of water, thanks to the sunny and warm day. On a bigger one a man was on his mountain side with a little dog and his wife on the other. He had no idea how to cross the stream. Alfred gave the man one of his poles, removed the mountain boots and fixed them on the backpack, took the little dog under his arm and walked barefooted through the water. The man did not put off his shoes when he dared to cross the river - of course they were bedraggled when he came to his wife and dog.

Beseggen is Norway's most famous ridge - thanks to the Norwegian composer Peer Gynt. He described it sharp as a scythe and he claimed that he had ridden it on the back of a reindeer and had fallen down. Thus every Norwegian mountain climber and hiker has to do Beseggen at least one in their lives. It is a rocky ridge with no major difficulties located beautifully between the two lakes Gjende and Bessvatnet.

The easiest access is the expensive boat from Gjendesheim to Memurubu. But we did the tour in the afternoon and evening to avoid the usual crowd from Memurubu. We started our hike in Bessheim and circled lake Bessvanet on its southwestern shore, approximately 10 kilometers on a barely visible path. At 6:00PM were arrived at the saddle between the two lakes, where the views were spectacular. Just two other people were with us. At 8:00PM we came to its 1743 meters highest peak Vesselfjellet and back to our car at 11:00PM. Half way down the summit we were suddenly surrounded by a bigger reindeer flock. 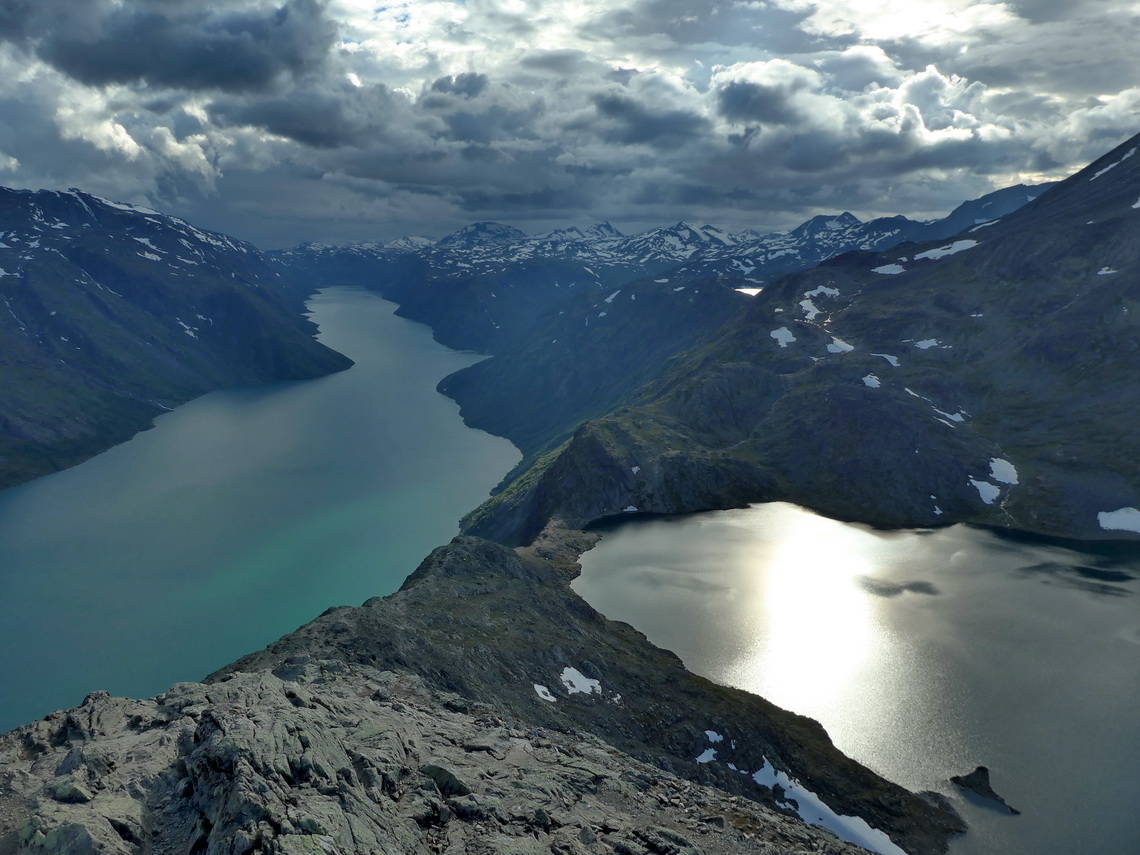 2460 meter high Glittertinden is the second tallest peak of Scandinavia, sometimes its highest depending on the mass of ice on its summit. Early morning we bicycled from the parking lot Grenbue to the mountain hut Glitterheim. For Norwegian standards a lot of people climbed up with us to the summit of Glittertinden. The last part was quite icy and we were more than happy to have our crampons and ice-picks with us. Some of the other hikers dared to walk without them on the ice with was a weird and scary issue. Fortunately nobody felt down. We continued totally alone to the opposite, remote and rough mountain Ryggjehøe (2142 meters sea-level), and back to our bicycles - a long day of 12 hours hiking and more than 1500 meters vertical distance. 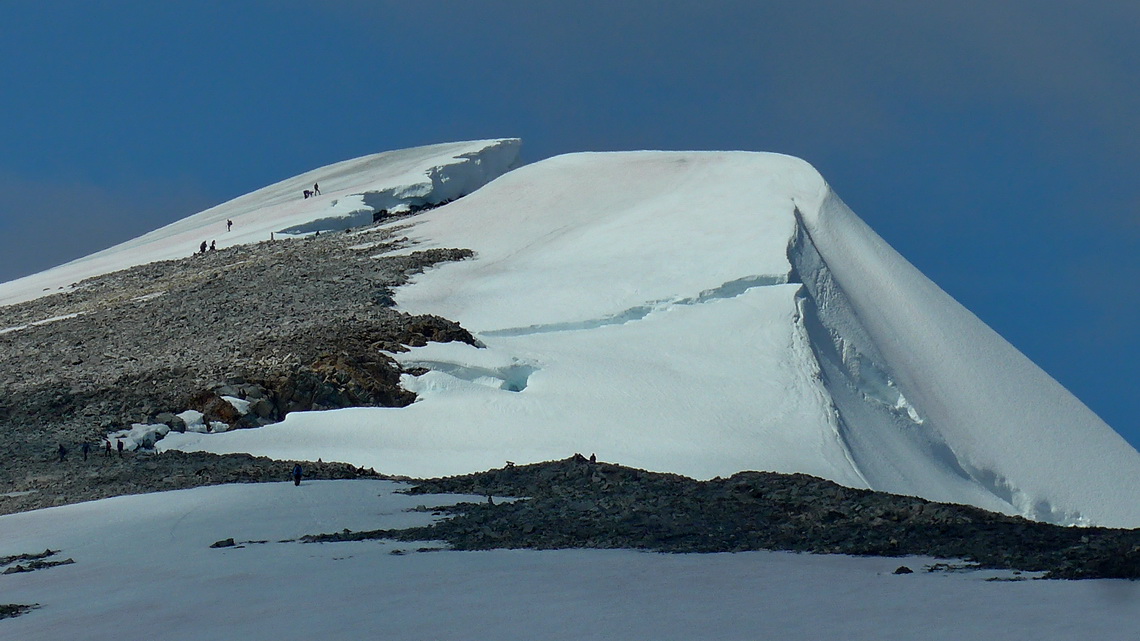 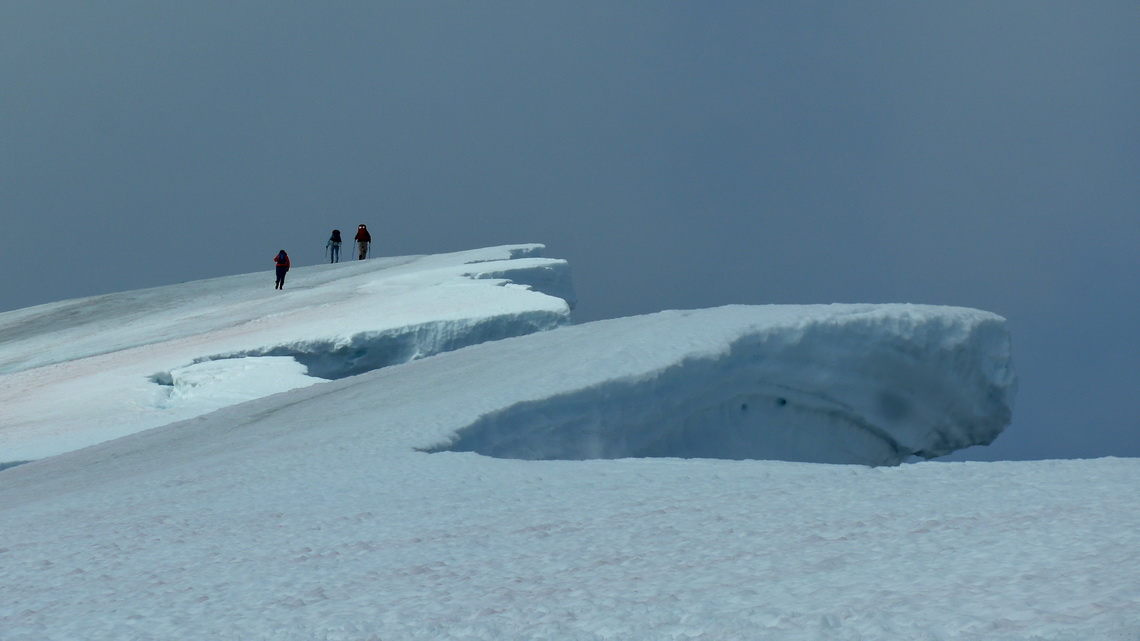 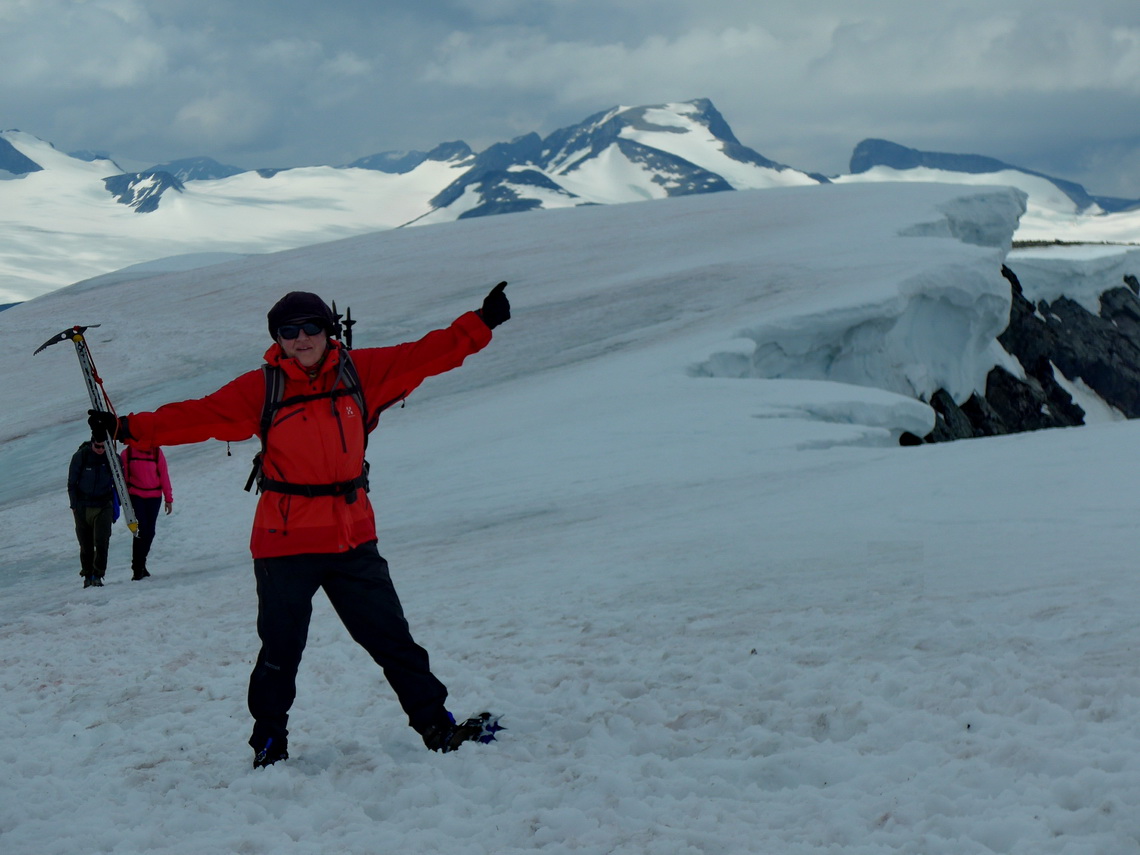 We wanted to watch the Musk Oxen in Dovrefjell  which is the only place in Norway to see these majestic animal. There is a warm and cozy shelter where we spent hours to detect them. We saw just some few shadows in the e distance but we climbed up the nearby mountains Tverrfjellet and Geitberget.

The weather forecast was everything but promising on the next day. Thus we headed north, to the Atlantic coast of the picturesque medium-sized city Kristiansund. 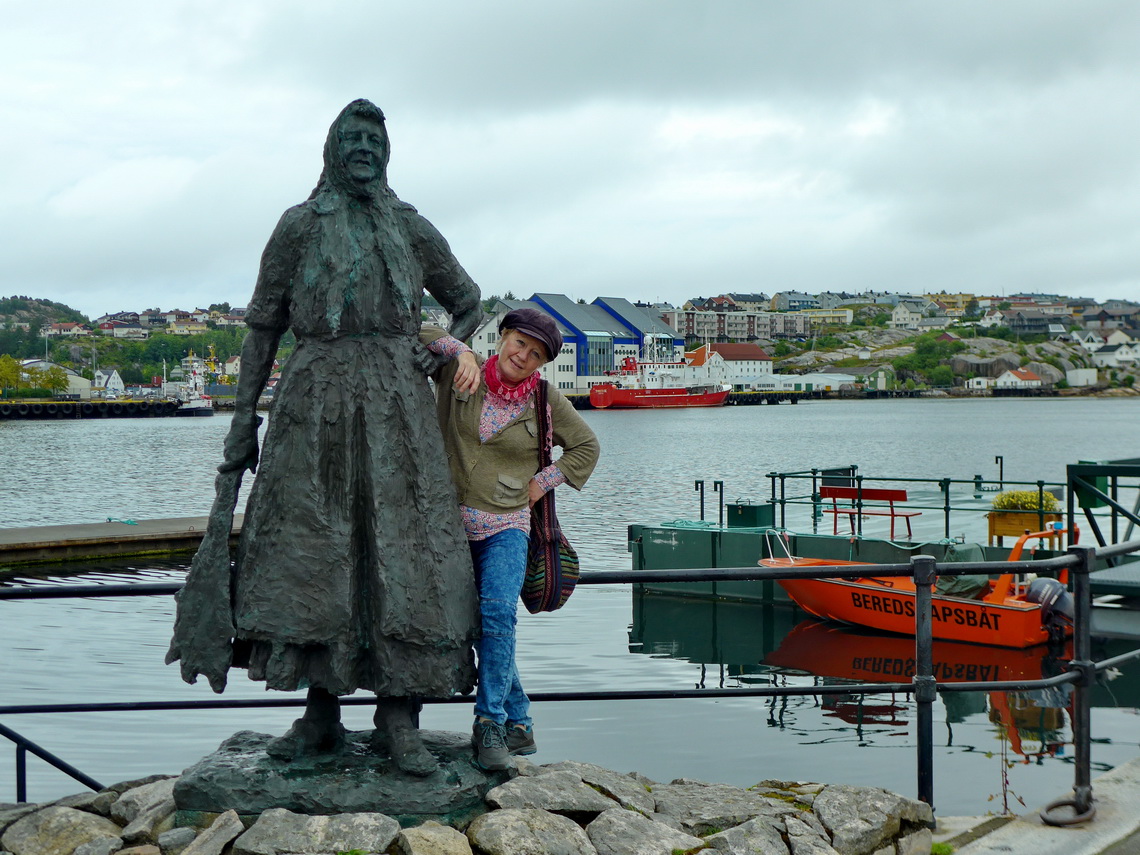 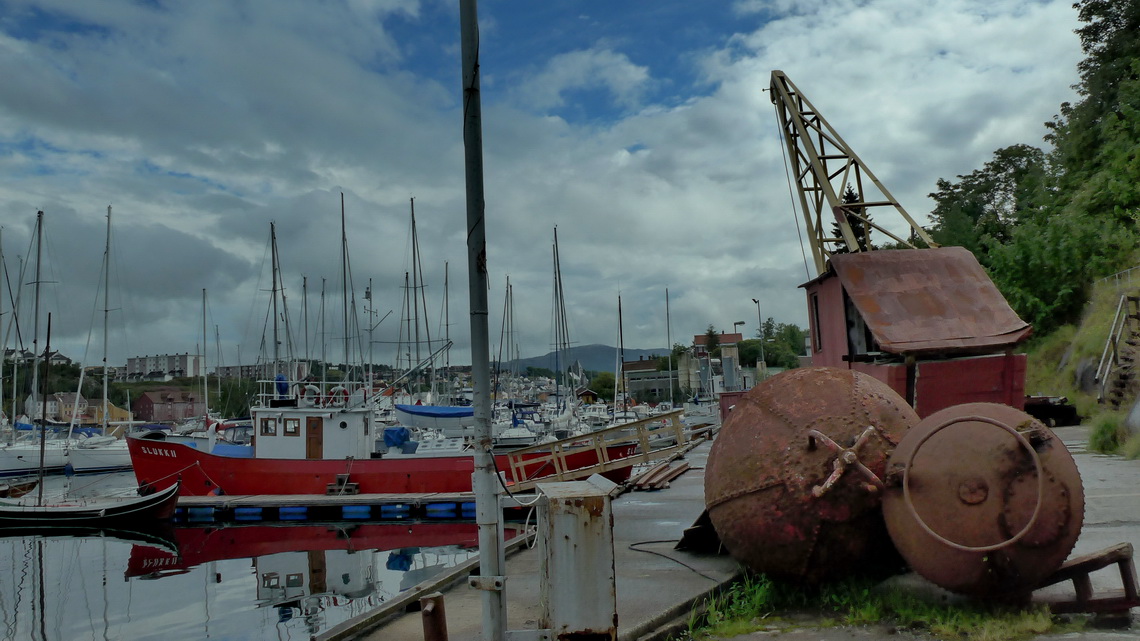 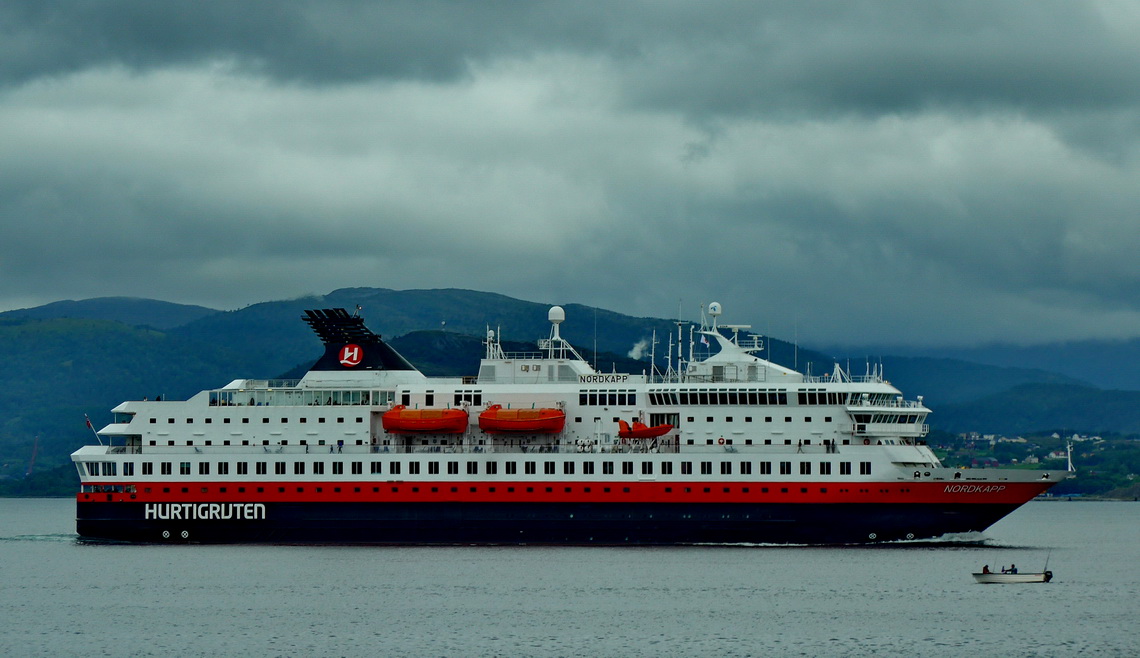 Northeast of Kristiansund is the island Tustna with beautific and quite steep mountains above the sea and its fjords. The weather was fine when we did the  a round-trip over Knubben, Vakta Leitinden and 857 meters high Jurtinden (or Jørenvågsalen) - an extraordinary nice hike. 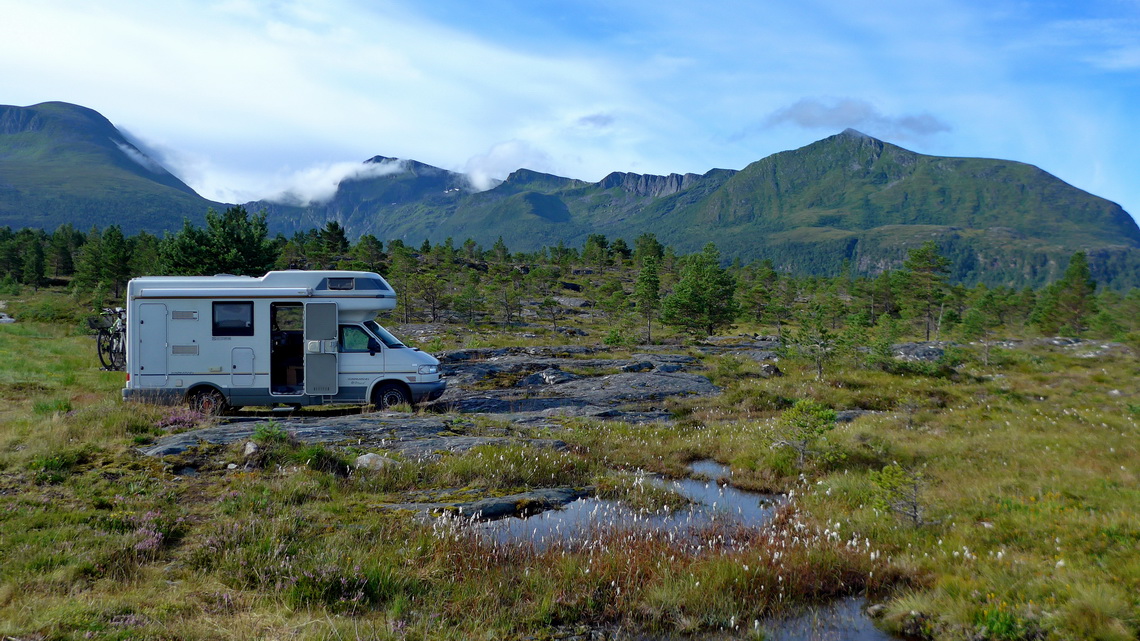 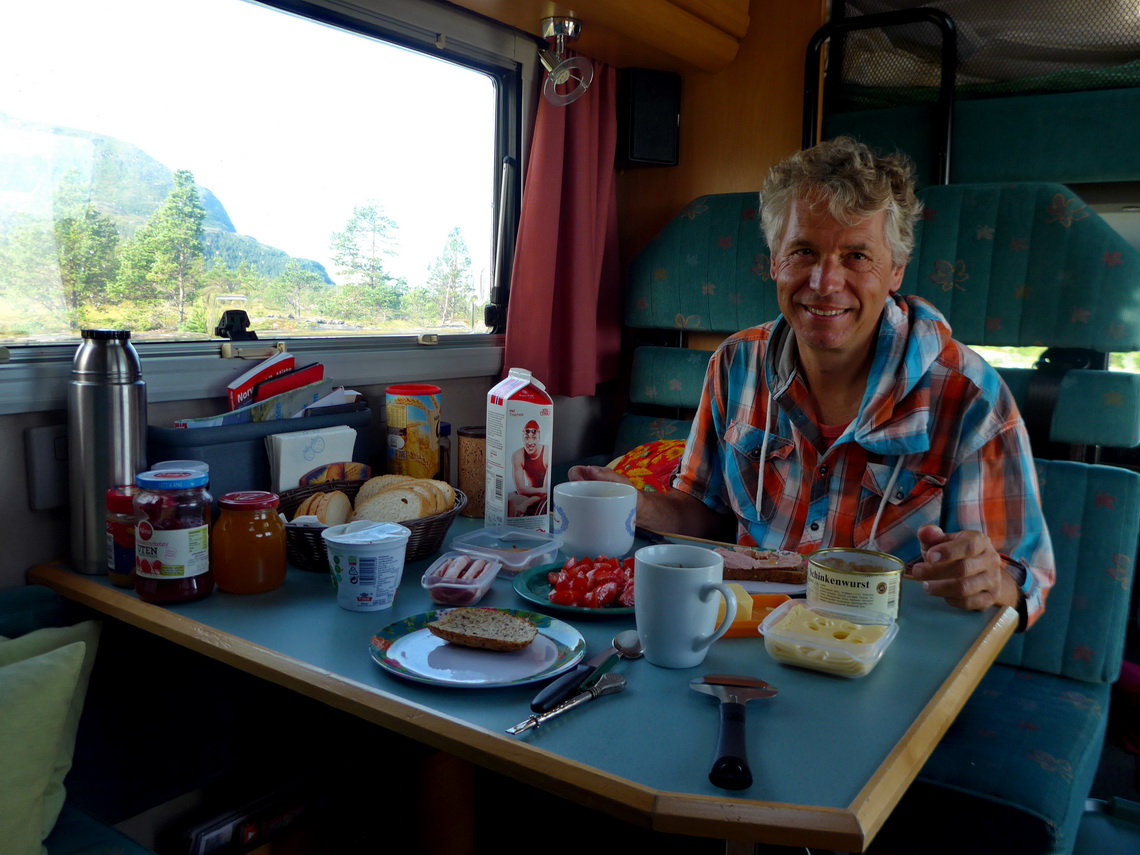 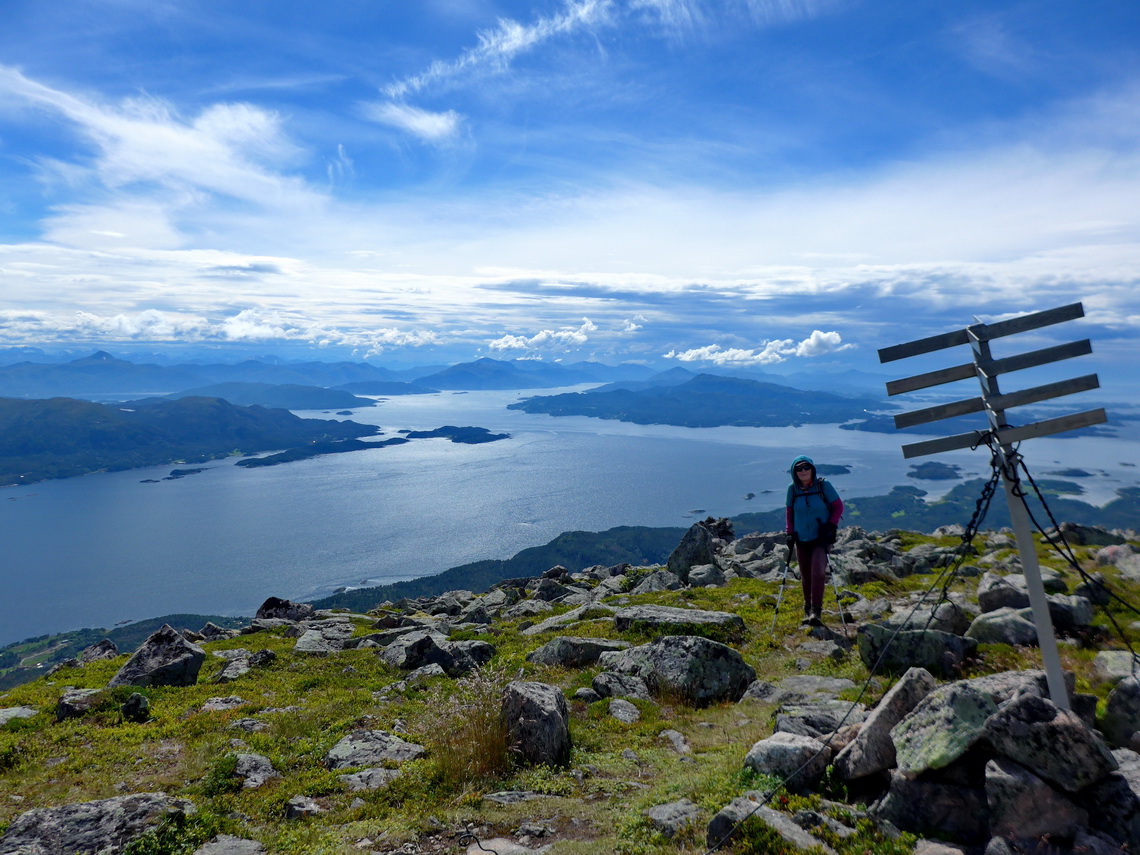 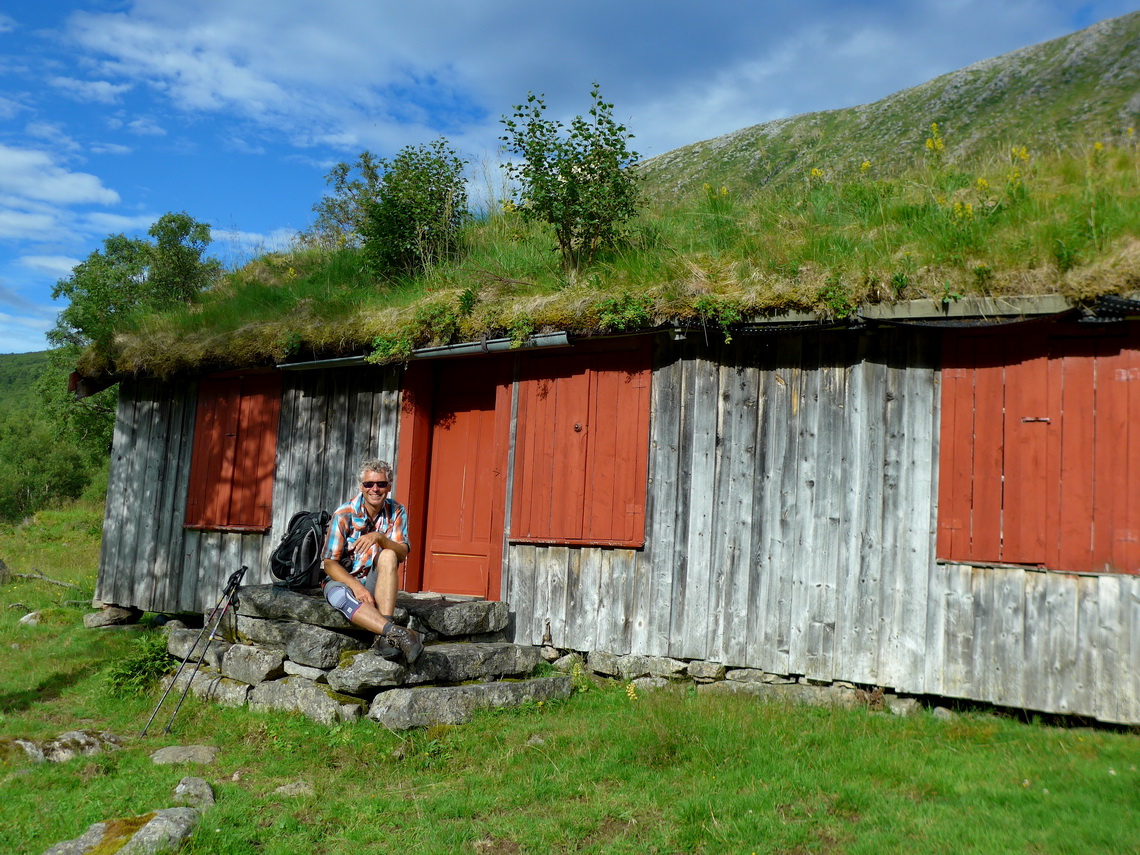 On the next day we circled the island Smøla with our bicycles - with the side trip to the little fishermen village Veiholmen a strenuous trip of more than 100 kilometers. The ferry from Tustna / Sandvika to Edøy is everything but expensive and our bikes were free of charge. We had such a nice sunny day but finally close to the end of our loop we became totally wet including our underwear! 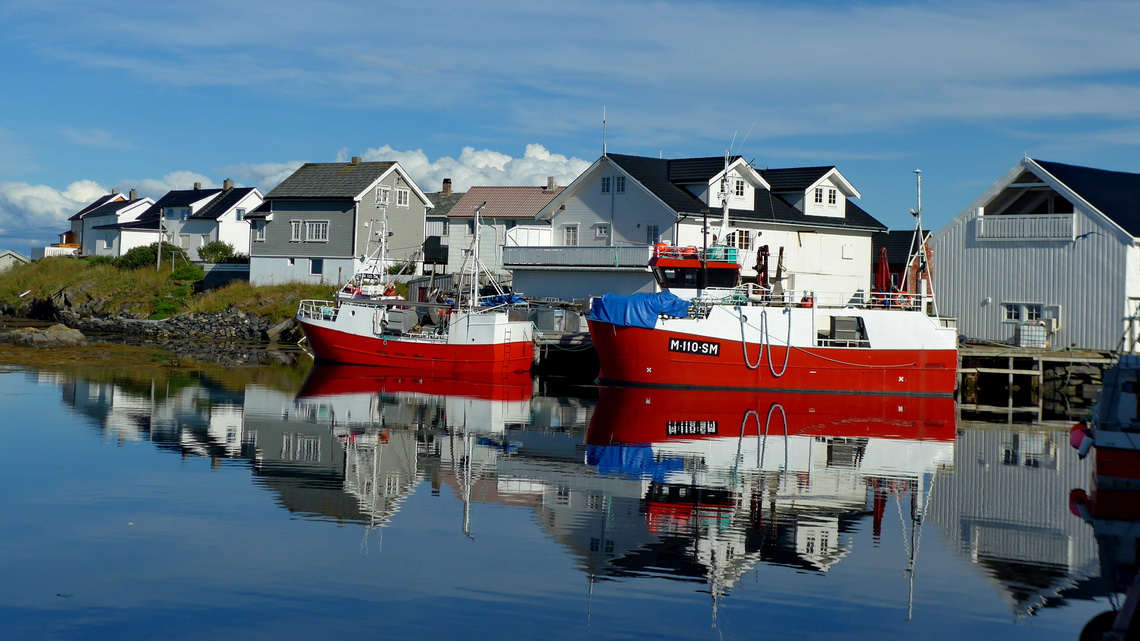 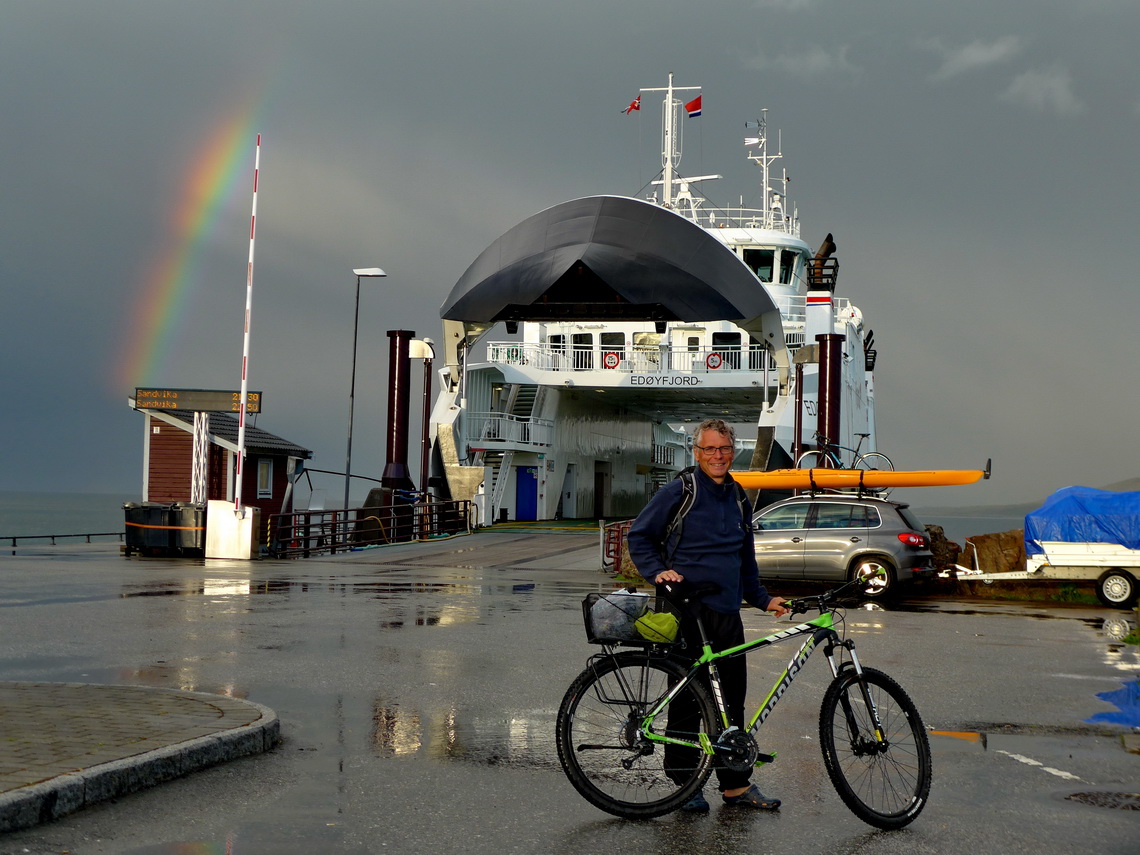 Our last and northernmost city was Trondheim which is with 190,000 inhabitants Norway's third largest town and its northern center. Trondheim is famous for its Gothic Nidaros cathedral which had been Northern Europe most important Christian pilgrimage site in the Middle Ages. 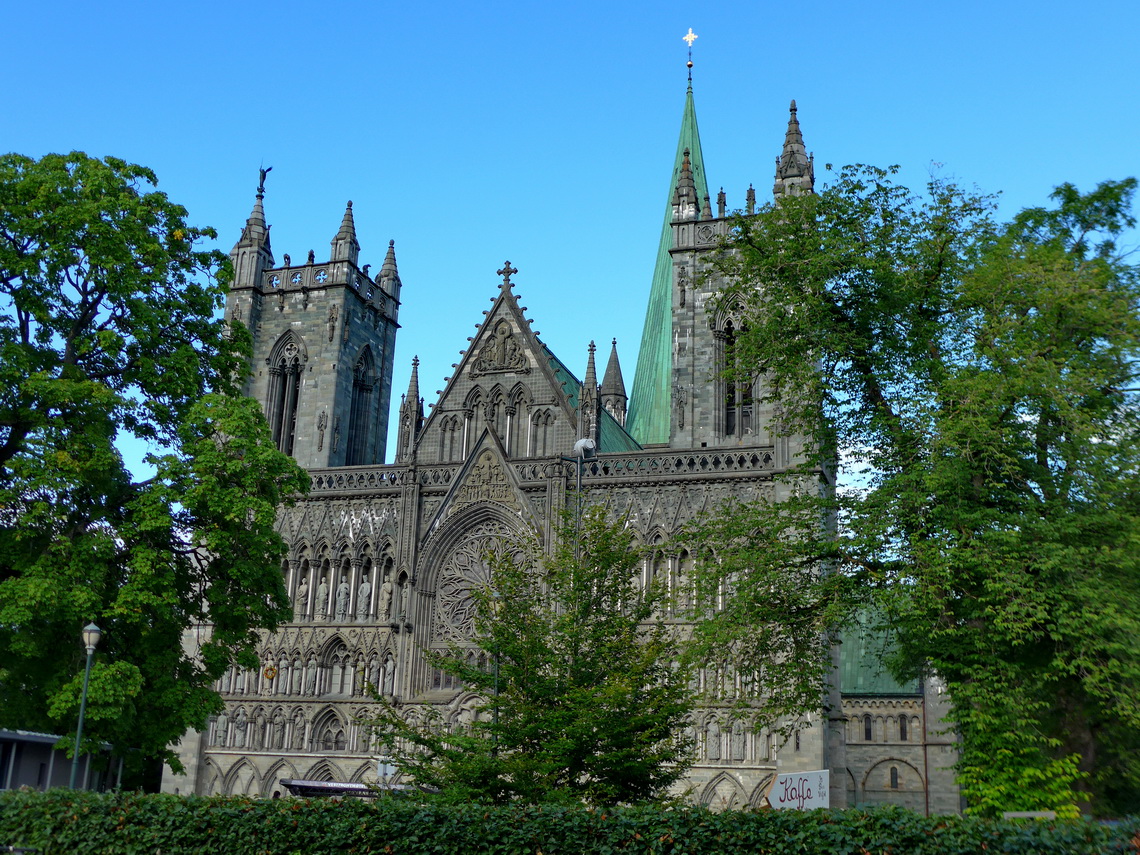 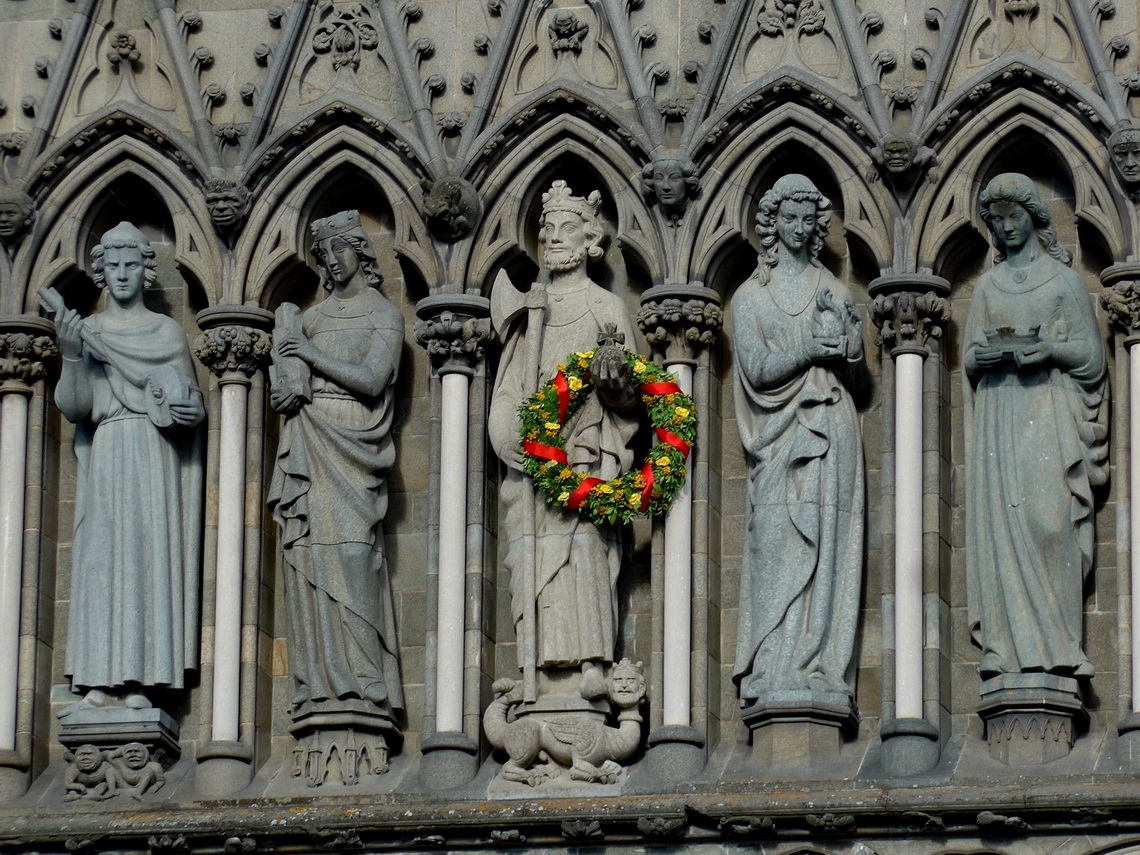 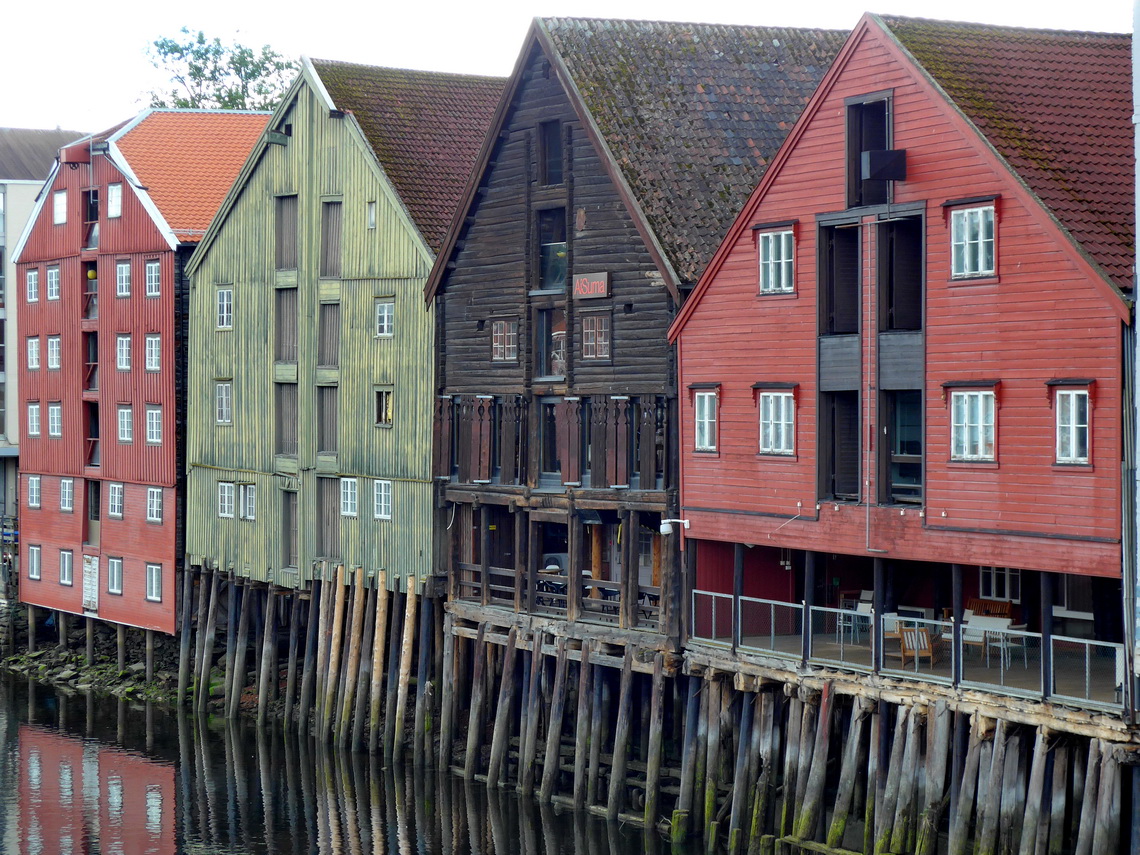 Our last and 33rd peak of Norway was the 1100 meters high Fonnfjellet close to the main street E14 between Trondheim and the Swedish border. Again we met nobody in a remote and wonderful environment. In the evening, August 1st 2016 we crossed the border to Sweden, bye-bye Norway! 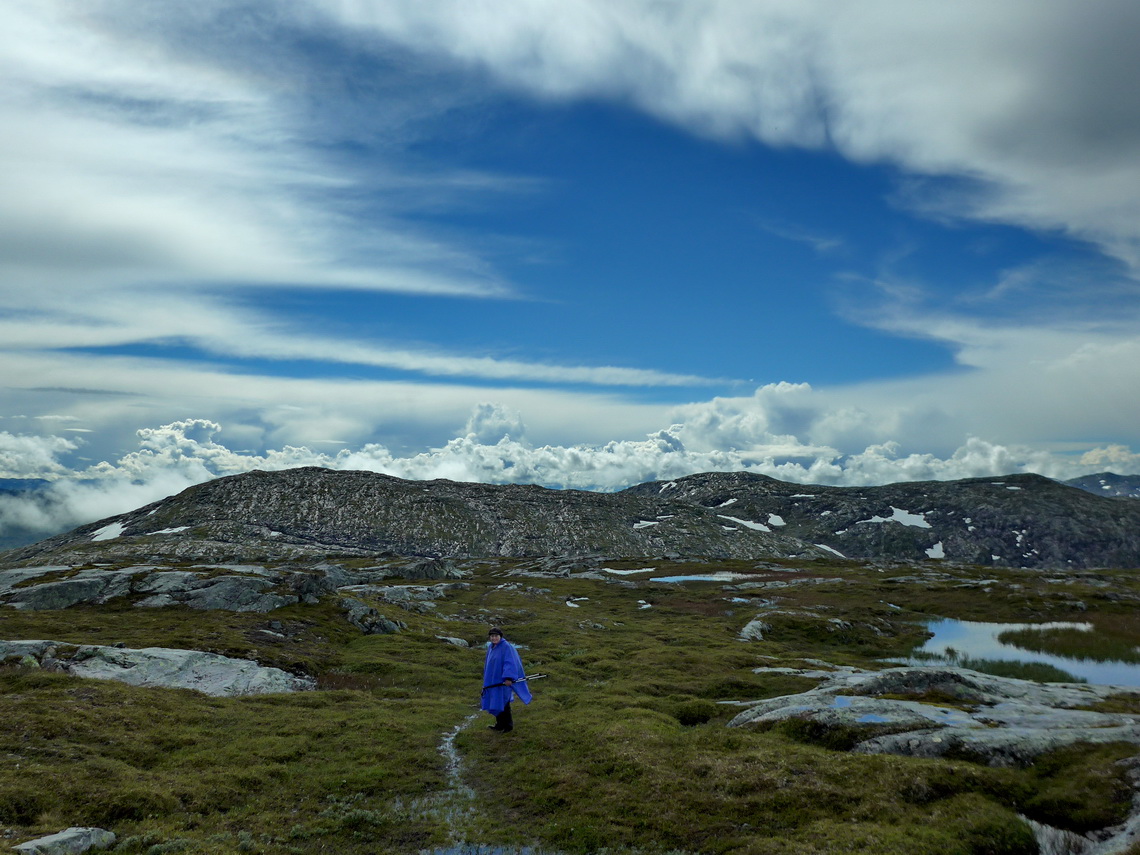