Salta is one of the most marvelous cities in South America. It is the only one in Argentina with the add-on "La Linda", which means The Beautiful. No other city in Argentina has so many historical buildings, places and parks. Salta is with approximately 400,000 inhabitants the second biggest city in northwest Argentina. Salta has a pleasant warm climate even in late autumn because it is situated just 1200 meters high on the eastern slopes of the Andes. Closed to Salta is the valley Quebrada de San Lorenzo with more or less tropical flora and fauna. North of Salta in the province Jujuy is the famous gorge Quebrada de Humahuaca, which directs to the border of Bolivia.

A side valley of the Quebrada de Humahuaca leads to the pass Paso de Jama to Chile. We came down this way from Chile, after our disaster with the shock absorbers; see last section in the article about San Pedro de Atacama and its environment. It turned out in Salta that the shock absorbers we had found in Chile were working in the wrong direction. Now we knew why we had become nearly seasick in our car! And we had two Indian Ladies in our car.

We found original German shock absorbers in Salta and a very good Volkswagen technician: Javier L. Torres, whose workshop is in the Catamarca 1050. He is a specialist for engines and he realized that some of the hydraulic tappets of our engine are not tight. Indeed 4 of them had scratches and oil was leaking into the cylinders which weakened the power of the engine and might reduce its life time. He had to disassemble the engine more or less completely, fortunately it worked afterwards perfectly without the buzzing noise it had before.

On the way down of Paso de Jama we passed wonderful salt lakes, villages and landscapes in the province Jujuy. 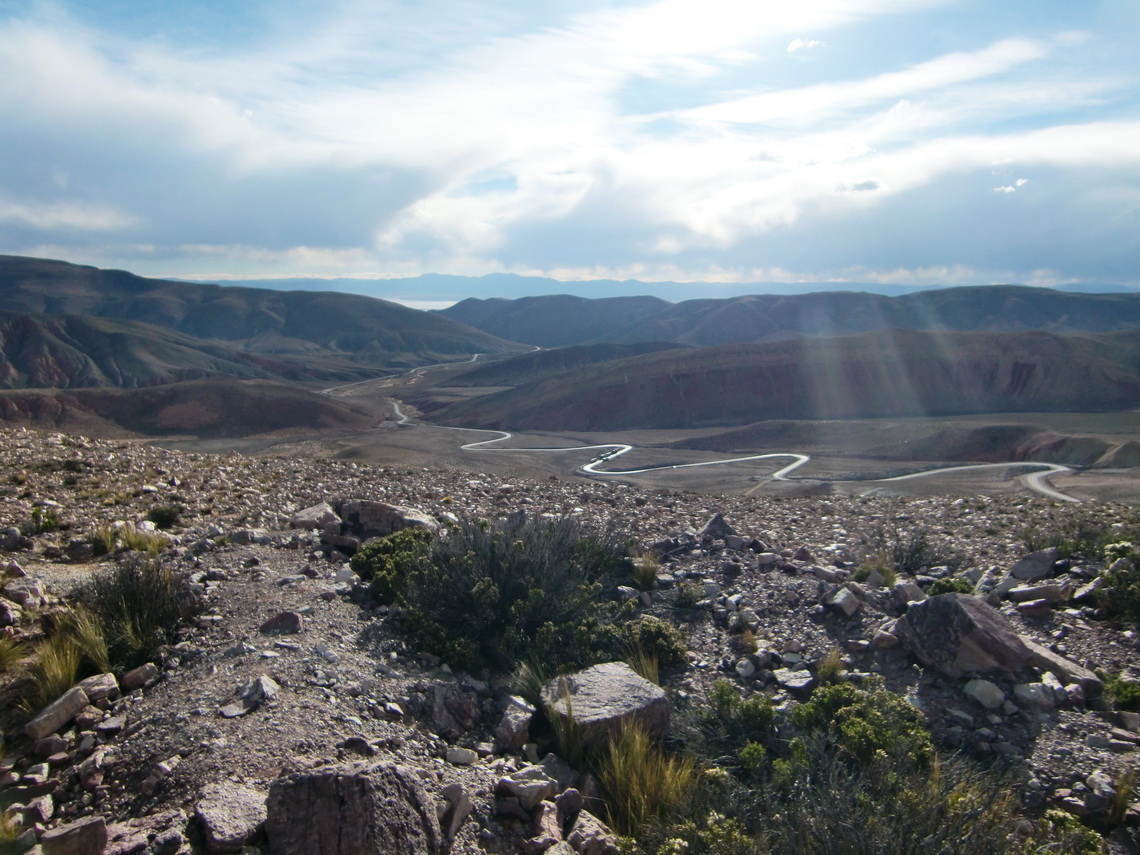 The most interesting and biggest salt lakes are the Salinas Grandes, where still today salt is exploited. 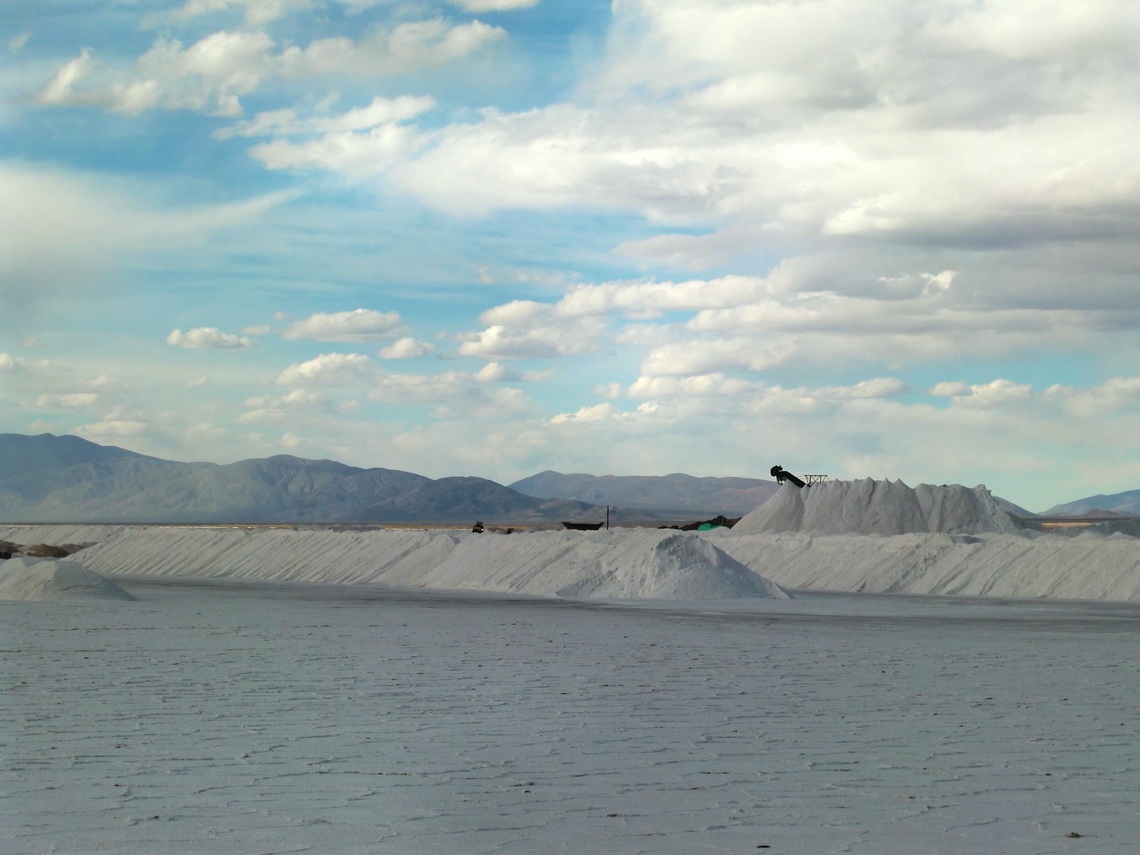 The more we came down the more it became green with flowers, trees and fields. We enjoyed the big contrast to the desert of the other Chilean side of the Paso de Jama. 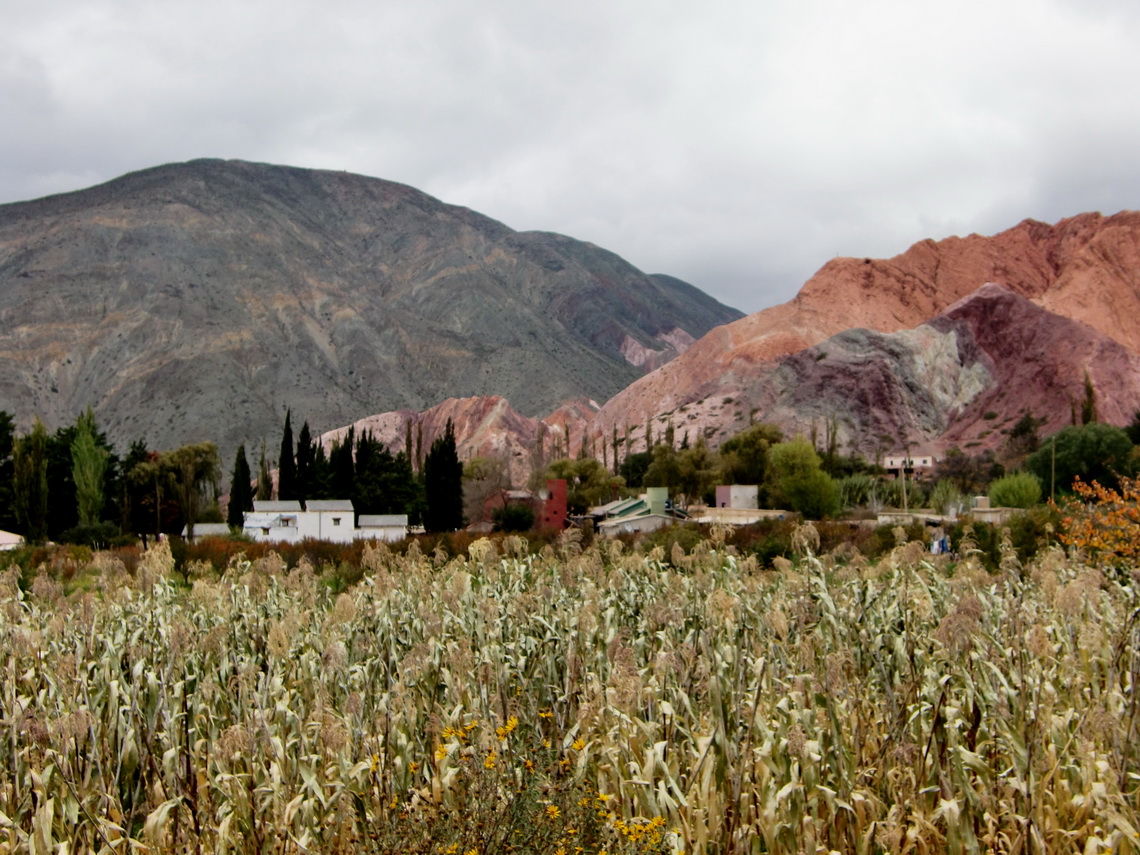 Salta has the very nice campground Xamena just 3 kilometers away from the city (GPS coordinates: S24° 48.746' W65° 25.076'). It is located around an enormous swimming pool. Due to the Dengue fever there was no water in the pool to avoid the insects which transfuse this disease.

We decided to stay longer in Salta and to learn a little bit Spanish. We selected the Instituto Franklin in the Alvarado 315 (GPS coordimates: S24° 47.269' W65° 24.349') and took 1.5 hours per day. This was more than enough, because we had to do a lot of homework and other exercises. Our teacher Gabriela started from the scratch. We had much fun and we learnt a lot. 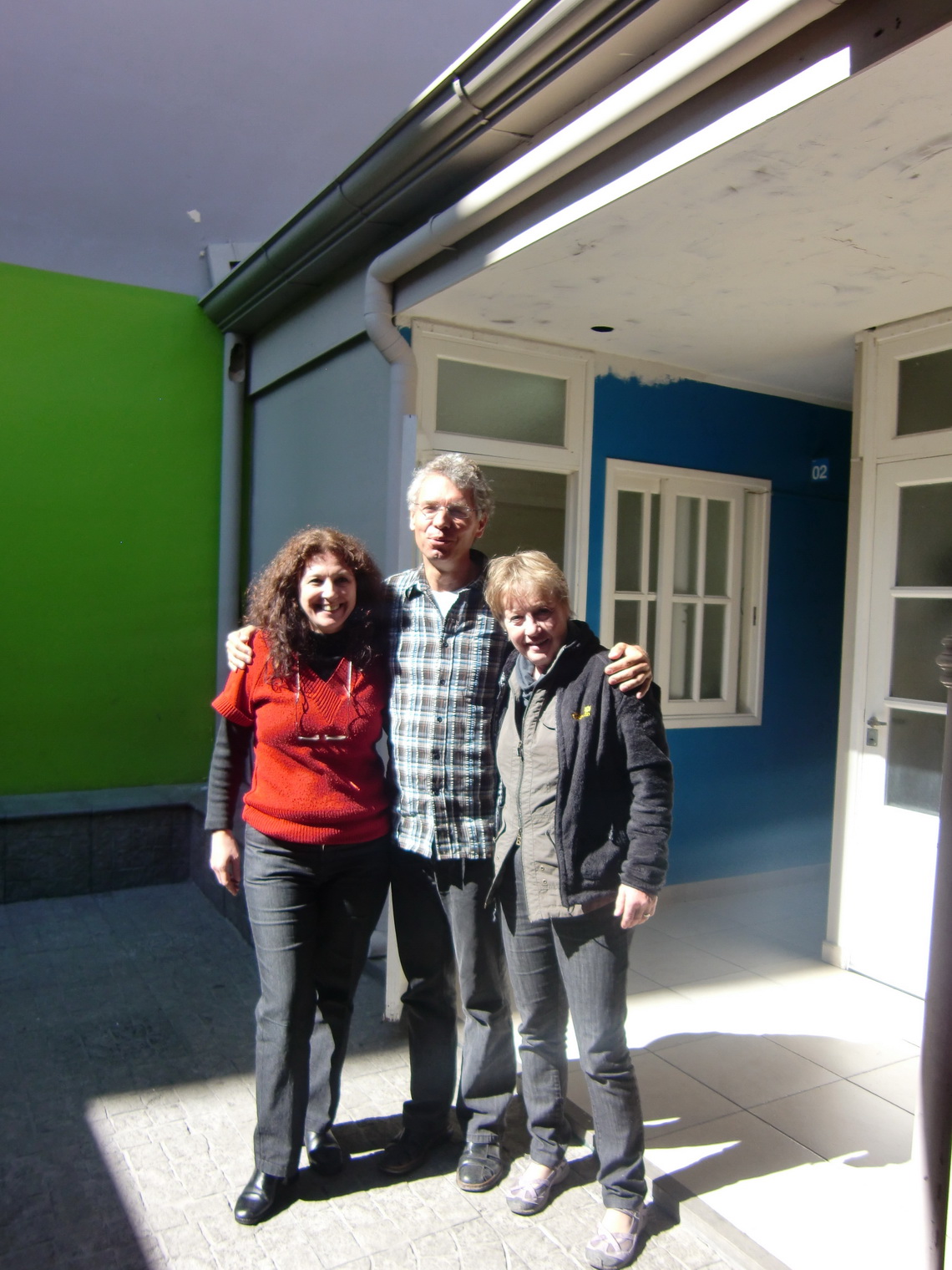 The biggest challenge was the daily drive with our bicycles to the school. The traffic was amazing; most of the rules are more or less redundant. The streets were shaky with big holes. The public buses were rude, e.g. they overtook us and stopped immediately in front of us.

Besides that Salta is a pleasant town with a lot of green, nice shops, interesting museums and the biggest pedestrian area, we had seen so far in South America. 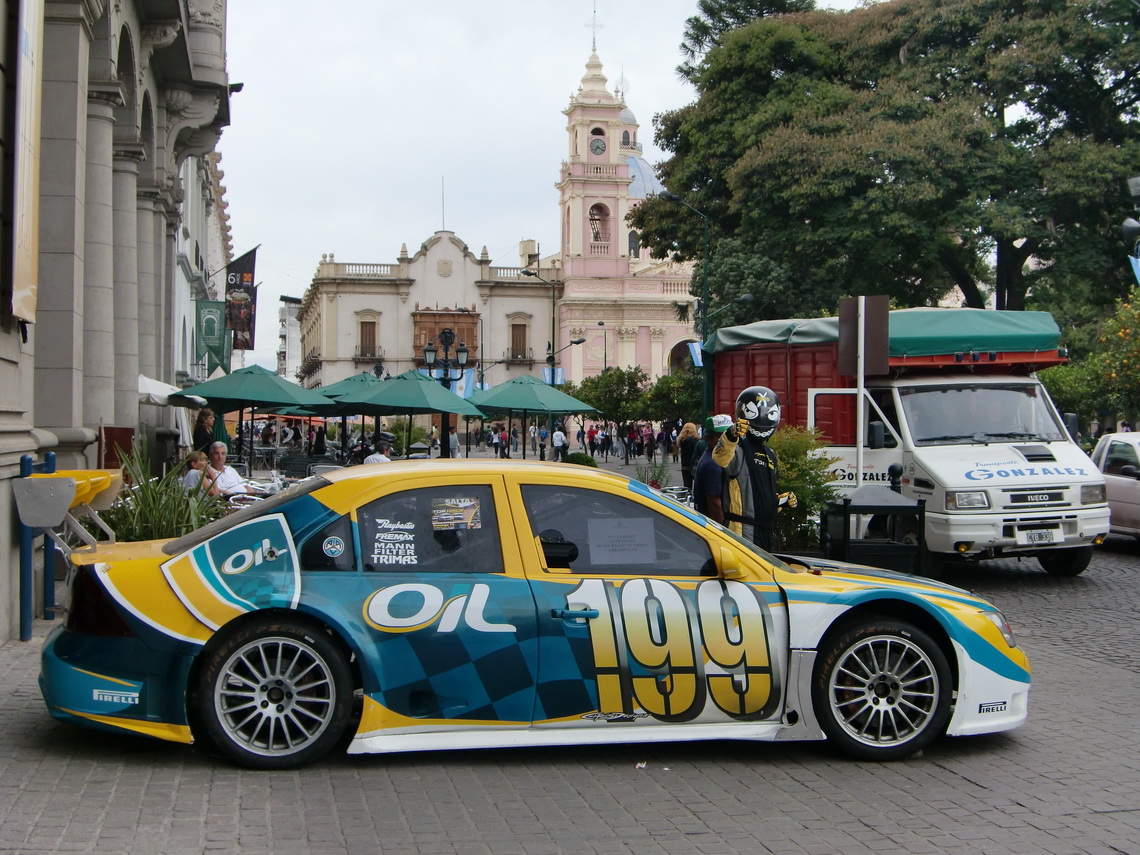 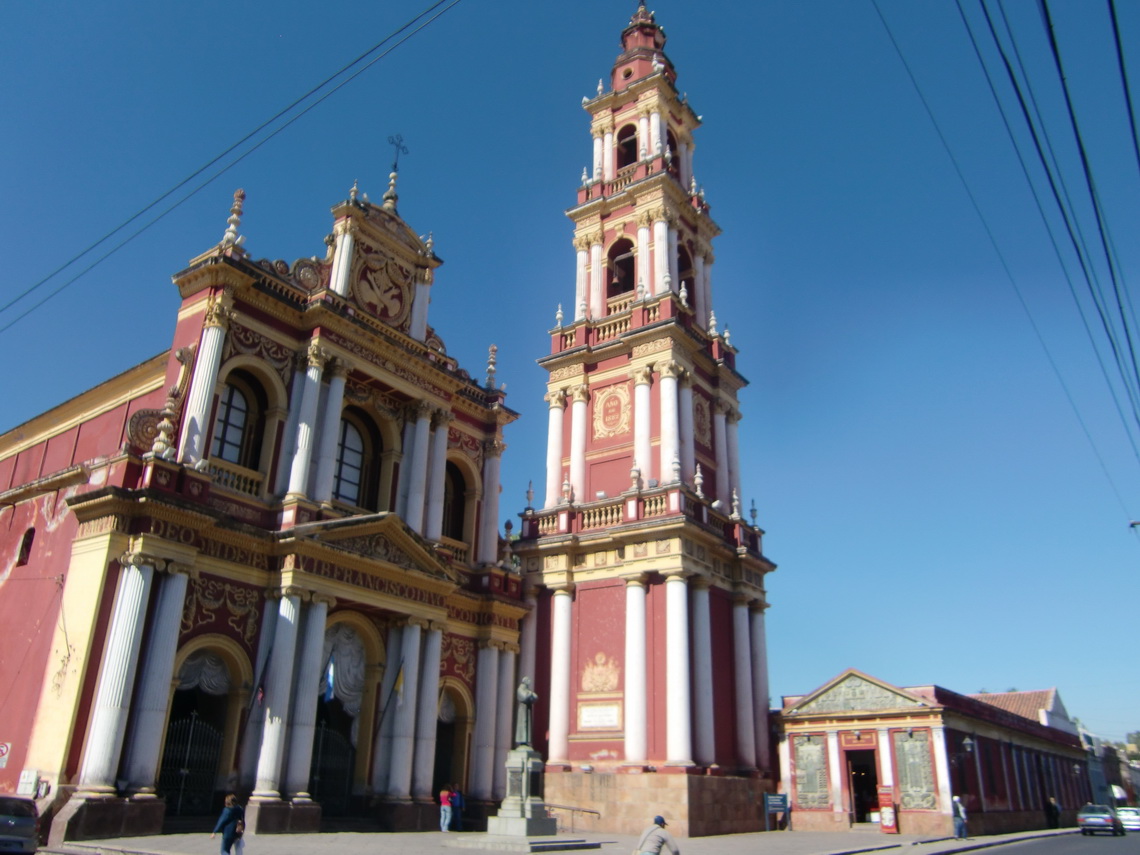 West of the city of Salta is the mountain Cerro San Bernado, which is about 200 meters higher. There is a nice park on top of this hill and also a funicular. But we used the 1026 steps to its top. 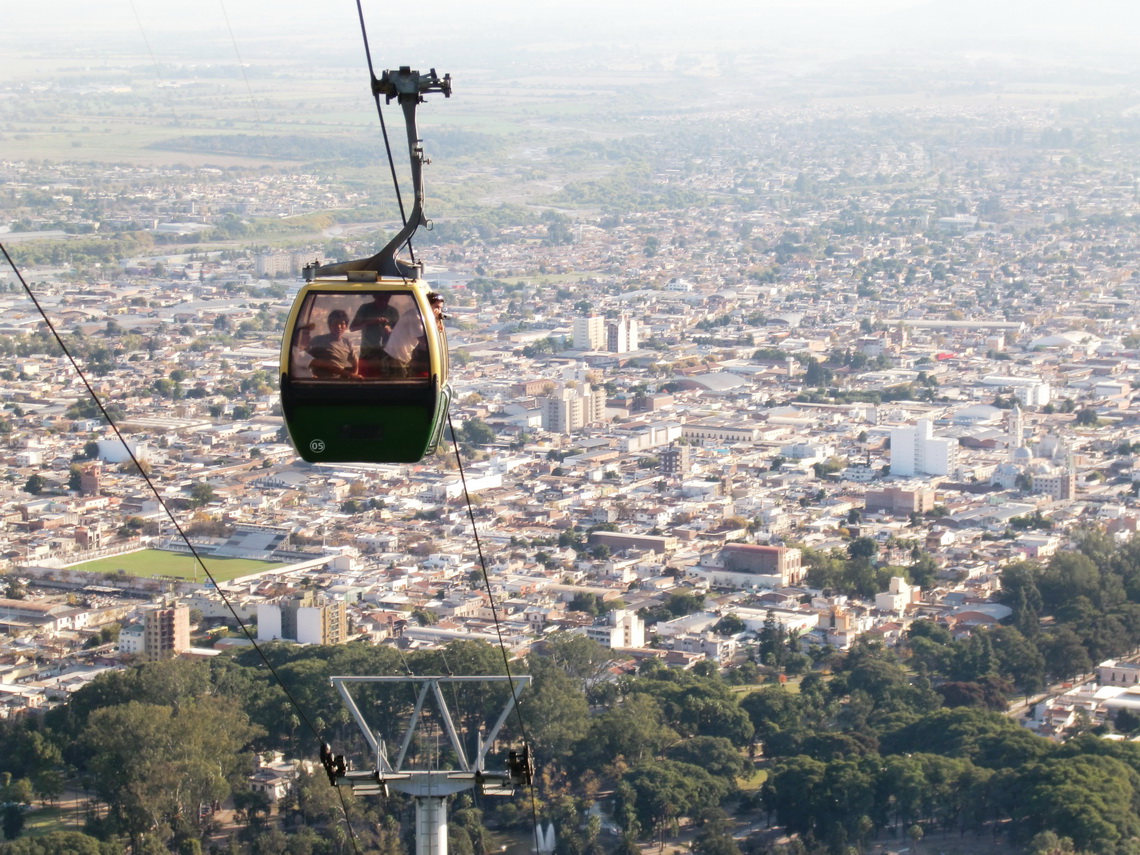 We met a lot of people on the campground, so we had very often a party in the evening. And we had again a granddaughter: Klara from Braunschweig in the north part of Germany. We cooked, washed up, played and laughed together - Thanks a lot Klara 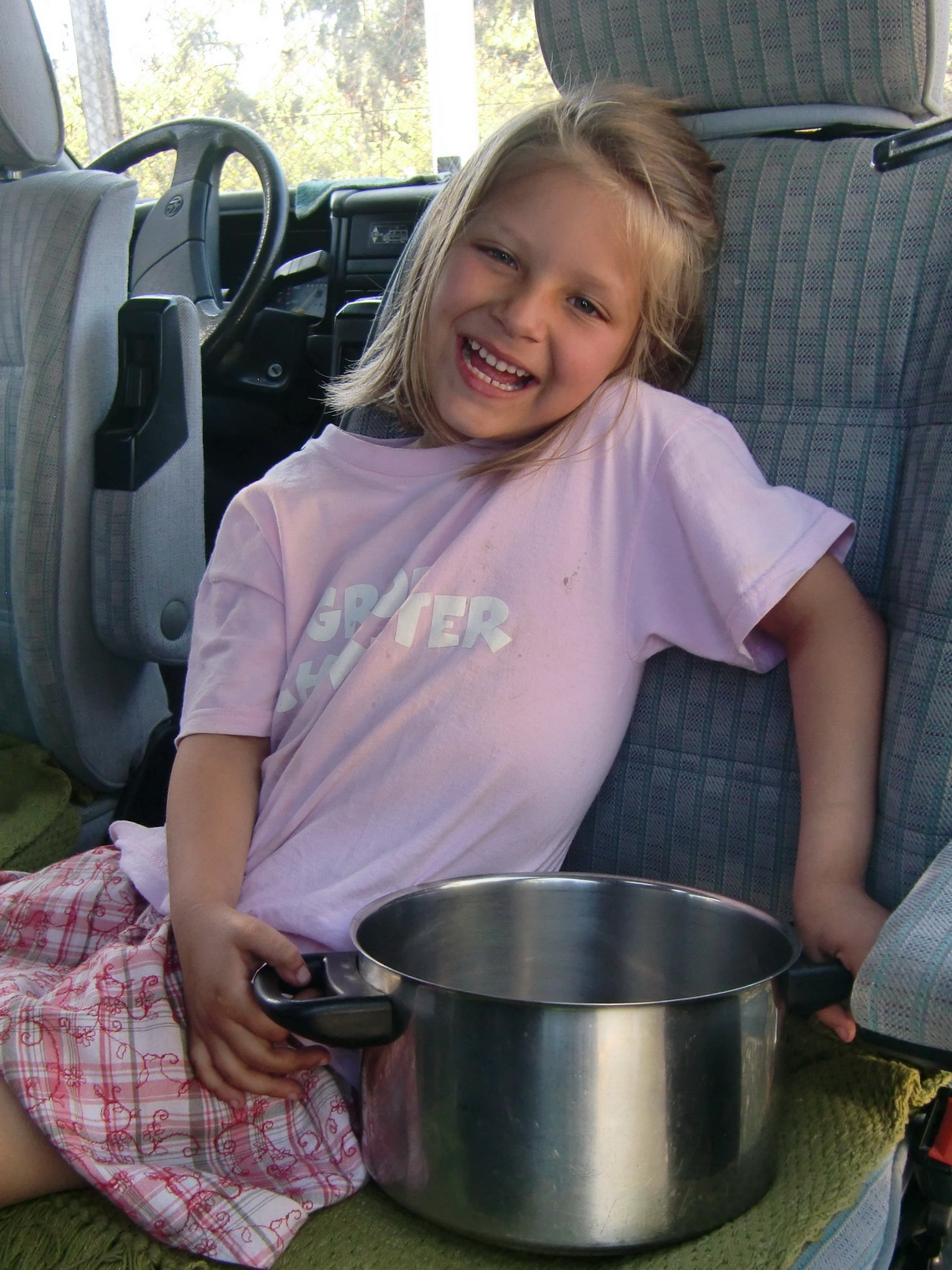 Also her one year old brother Knud visited us many times. 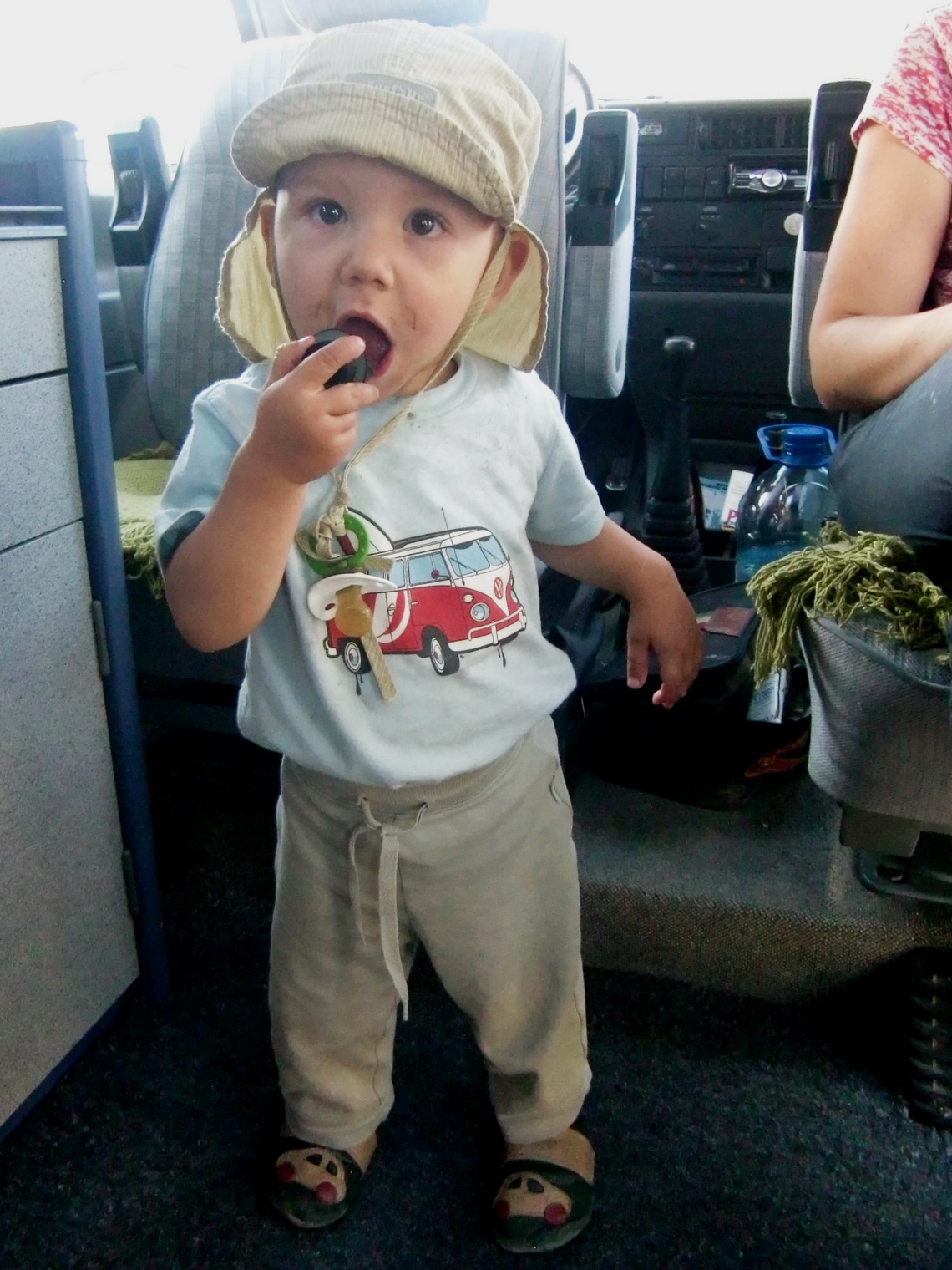 On the weekend we visited the gorge Quebrada de San Lorenzo with its sub tropical vegetation. These are the first ranges of the Andes and the clouds from the Atlantic Ocean are sticking here. Consequently a tremendous rich flora and fauna had been developed. 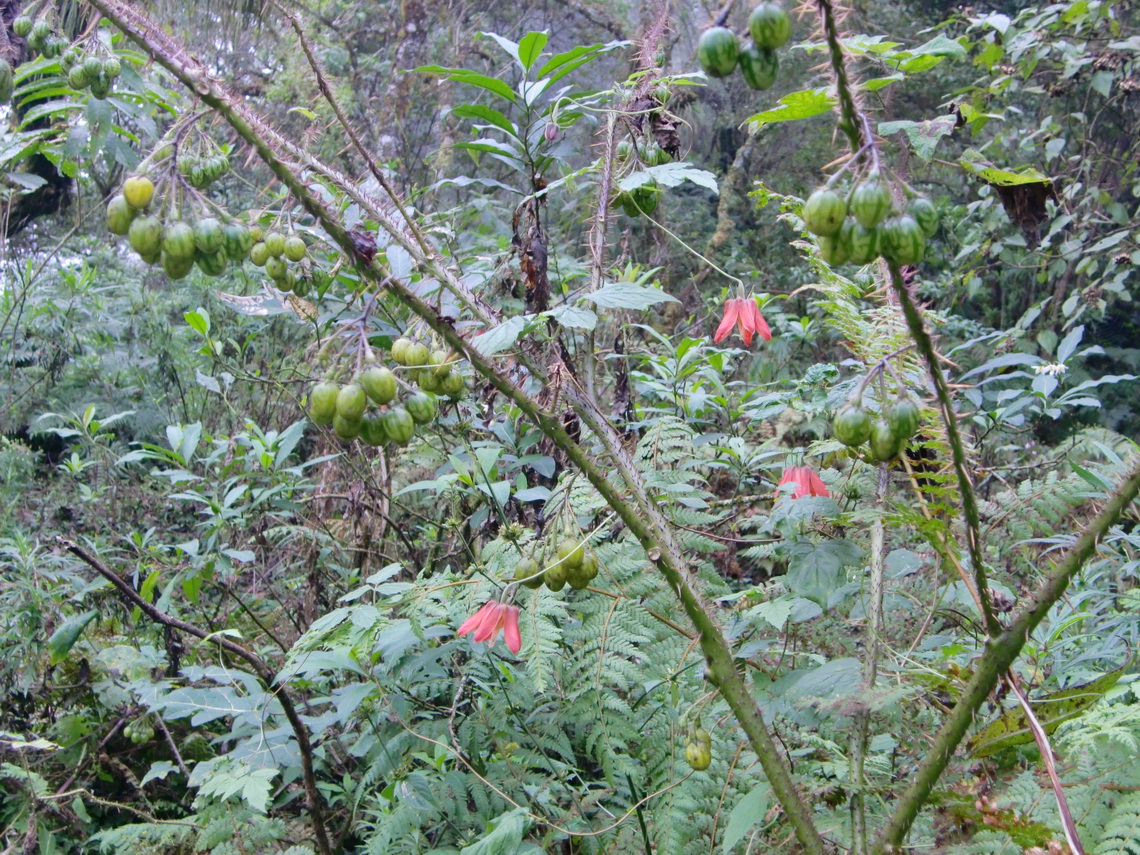 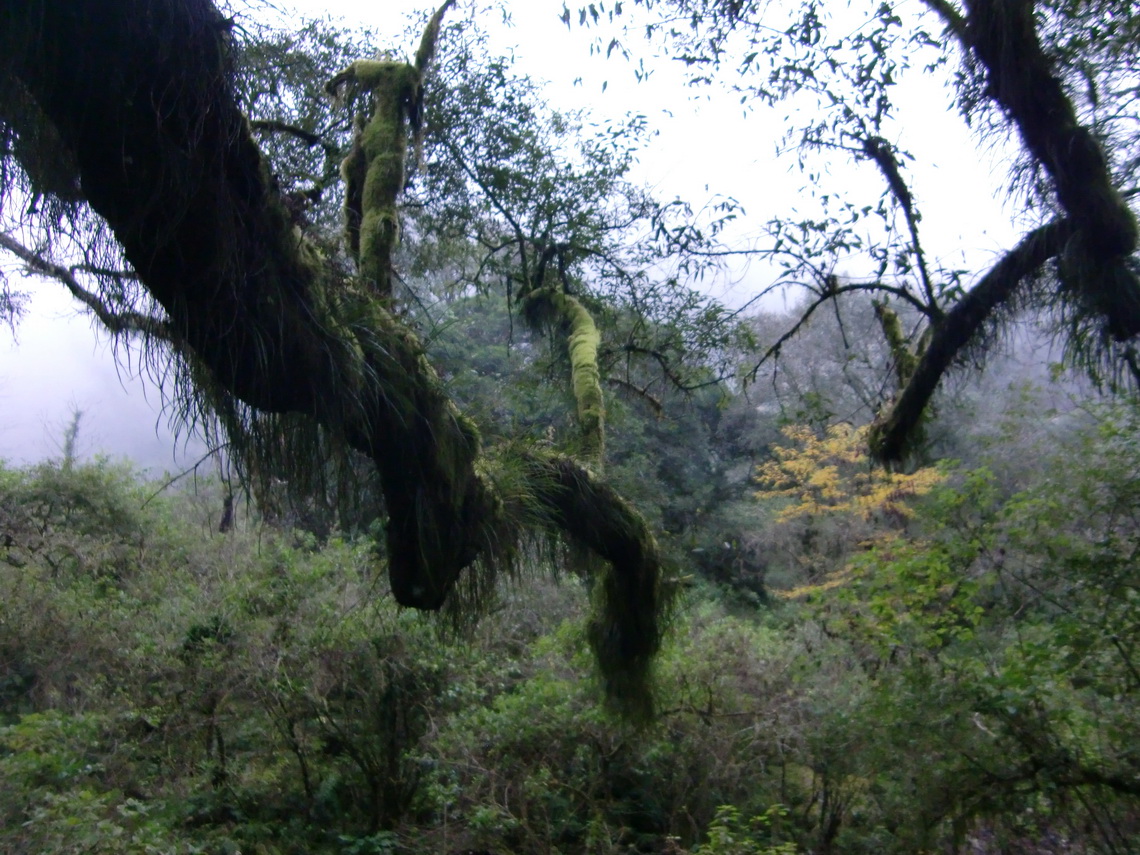 We hiked 4 hours to the summit of the Cerro San Lorenzo, but due to the sticking cloud we saw just fog on the top. Anyhow it was a nice experience walking through the dense jungle with pretty flowers like in paradise.

Back to the province Jujuy we used the ruta 9 instead the highway. This route guides through a pristine area with lakes, farms (cattle and horses) and very green vegetation. 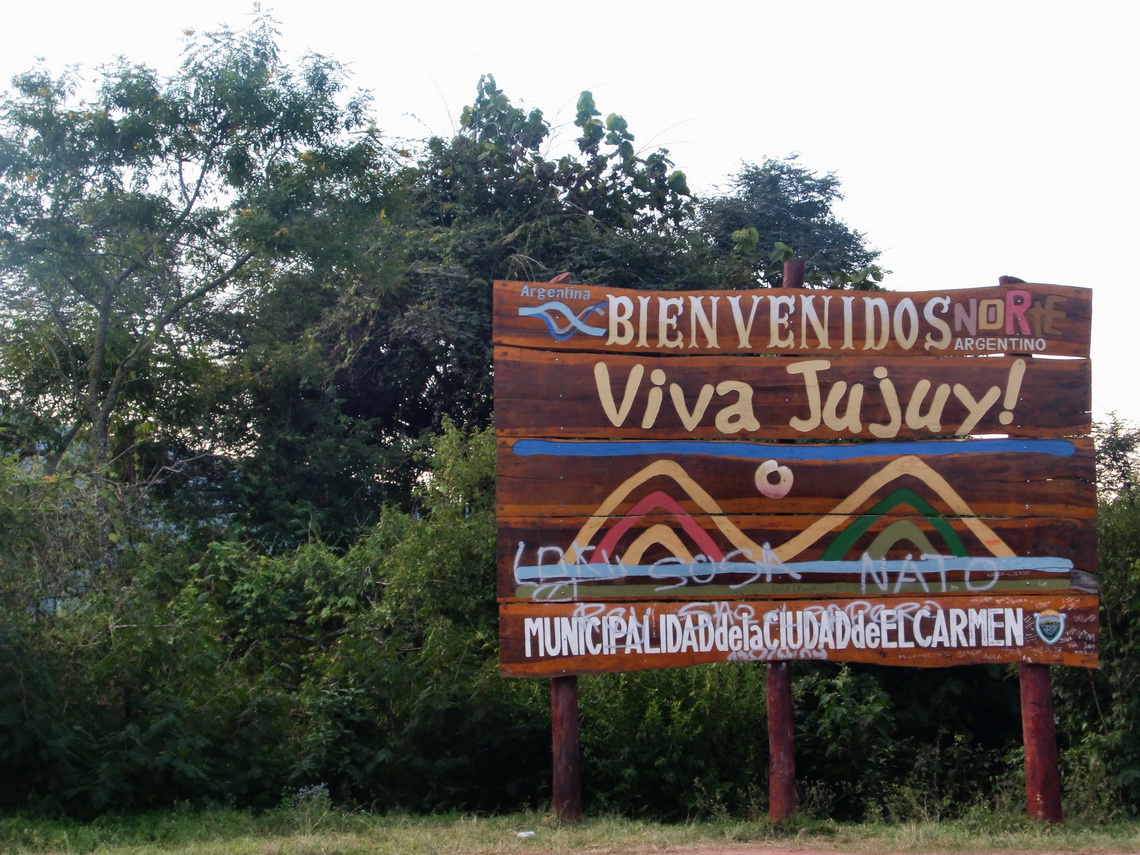 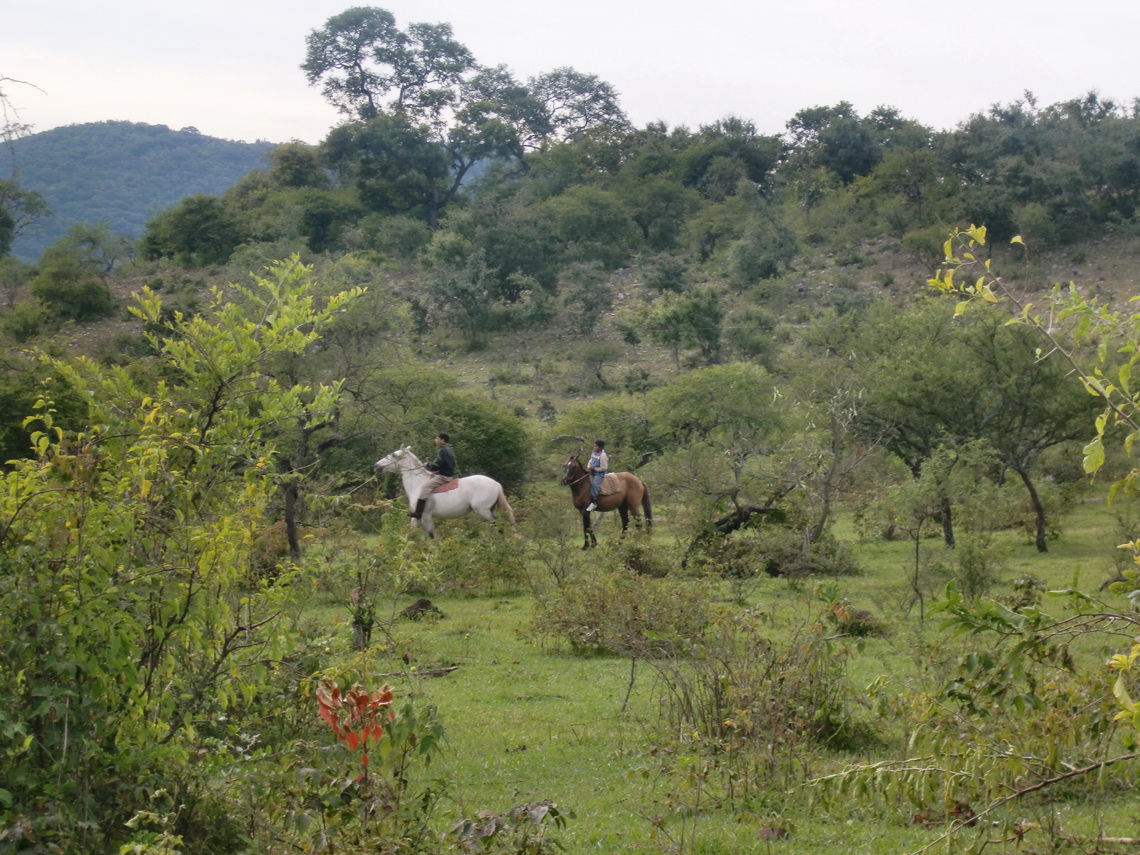 Closed to the capital of the province Jujuy, San Salvador de Jujuy are the hot springs Termas de Reyes. There is an exclusive and expensive wellness hotel with a more than 25 meters high fountain, but also a nice pool outside of the hotel area. In this pool you can enjoy the 35°C warm water for less than one buck. 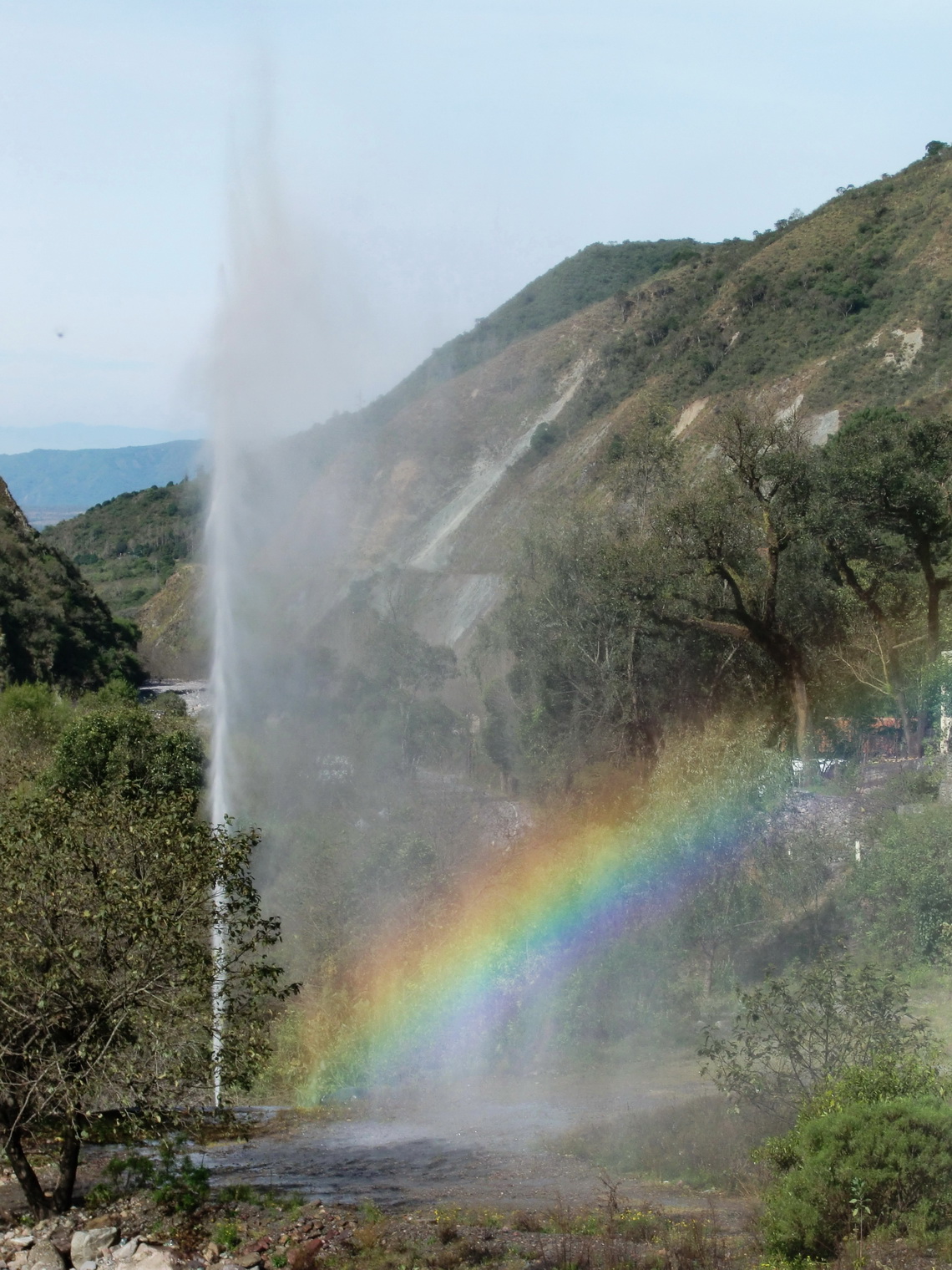 We wanted to drive directly from Termas de Reyes to Lagunas de Yala. The road became more and more dirty. Suddenly the way was blocked by a landslide - no way to continue. There was a nice green area in front of the landslide - Alfred thought perfect to turn the car. But it was deep slush and consequently we were in the shit with our car. We worked two hours: Jack up a tire, putting stones under the tire and move the car few centimeters. Darkness came, but also another car with 5 men. Together we pushed the car out of the slush immediately.

Soon after San Salvador de Jujuy we were back in the colorful Quebrada de Humahuaca. 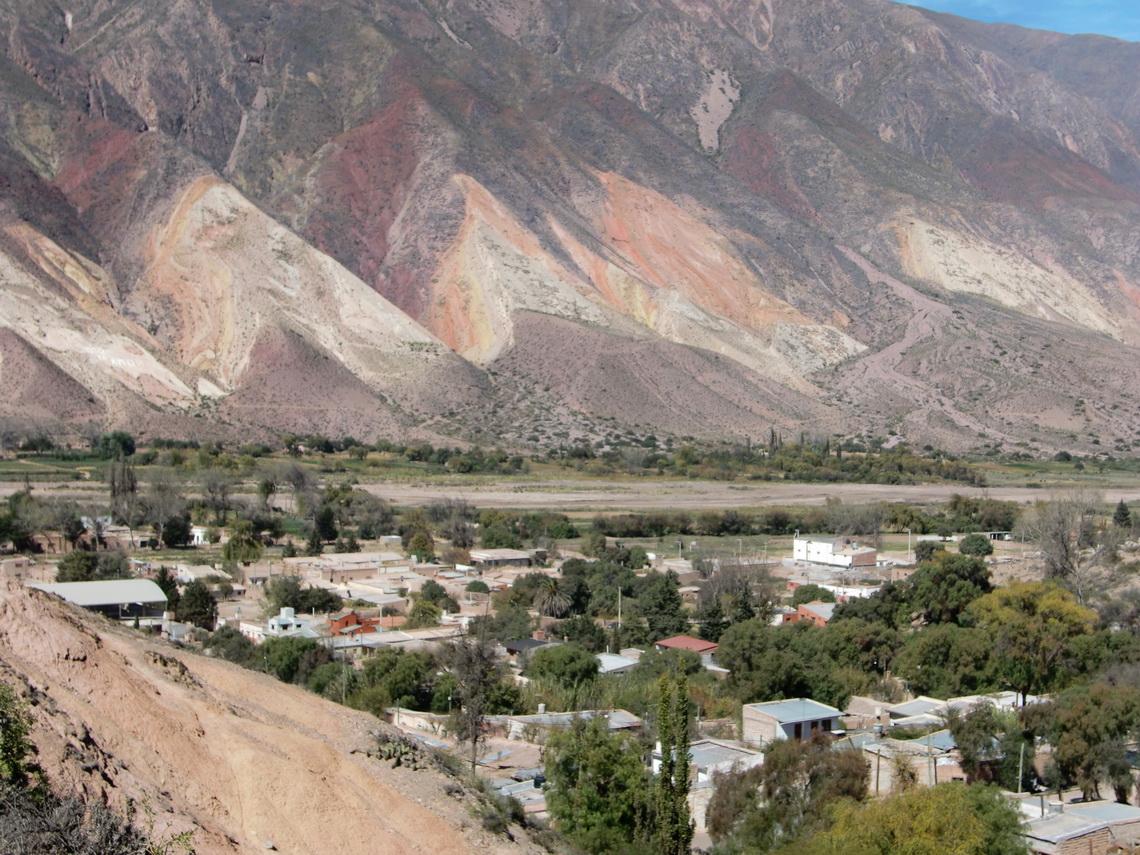 The most interesting town in the Quebrada de Humahuaca is Tilcara with the ancient fortress village Pucara and the gorge Garaganta del Diabolo. The gorge is approximately 20 kilometers outside of Tilcara; it is also a perfect place for the night. 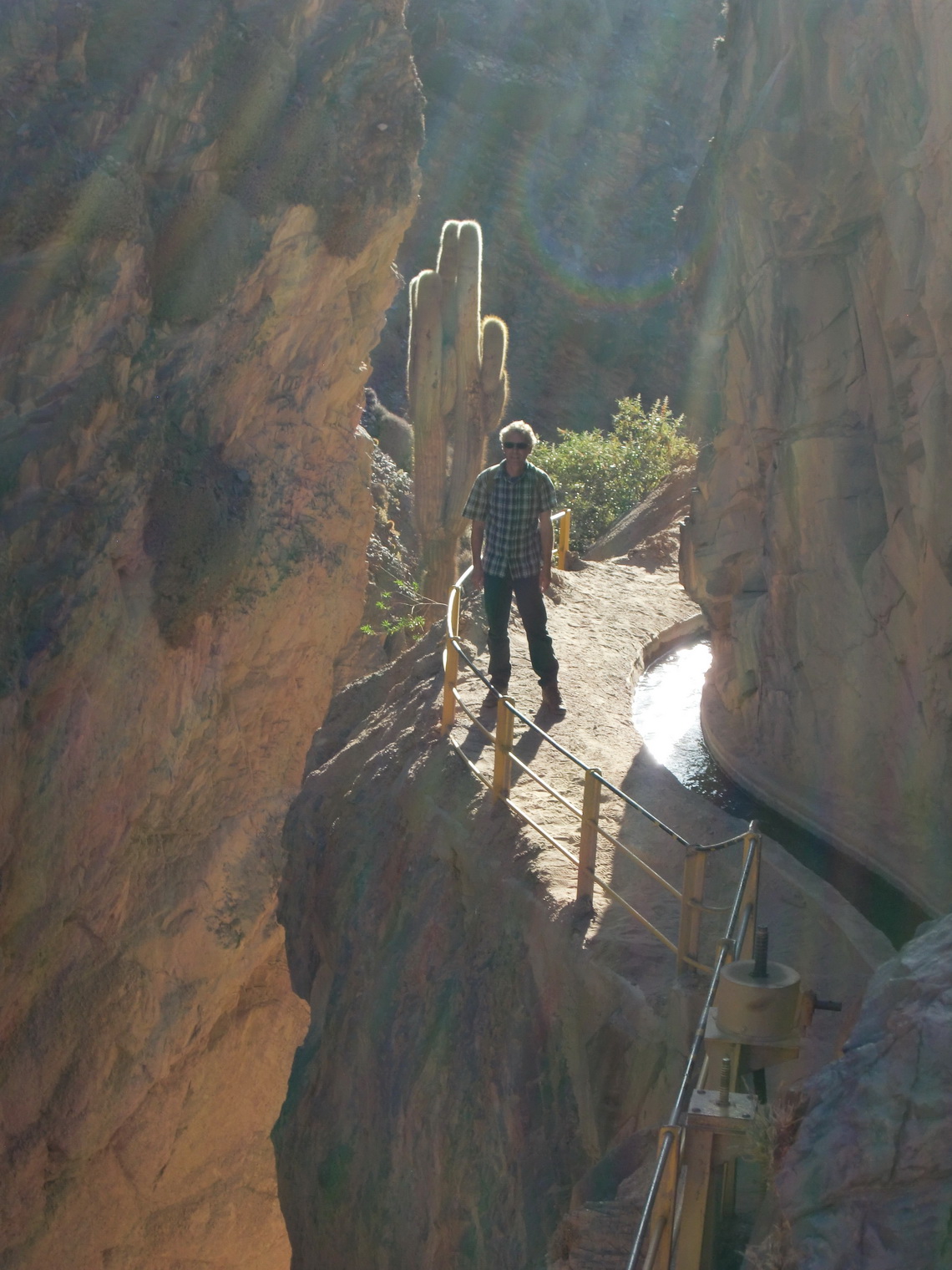 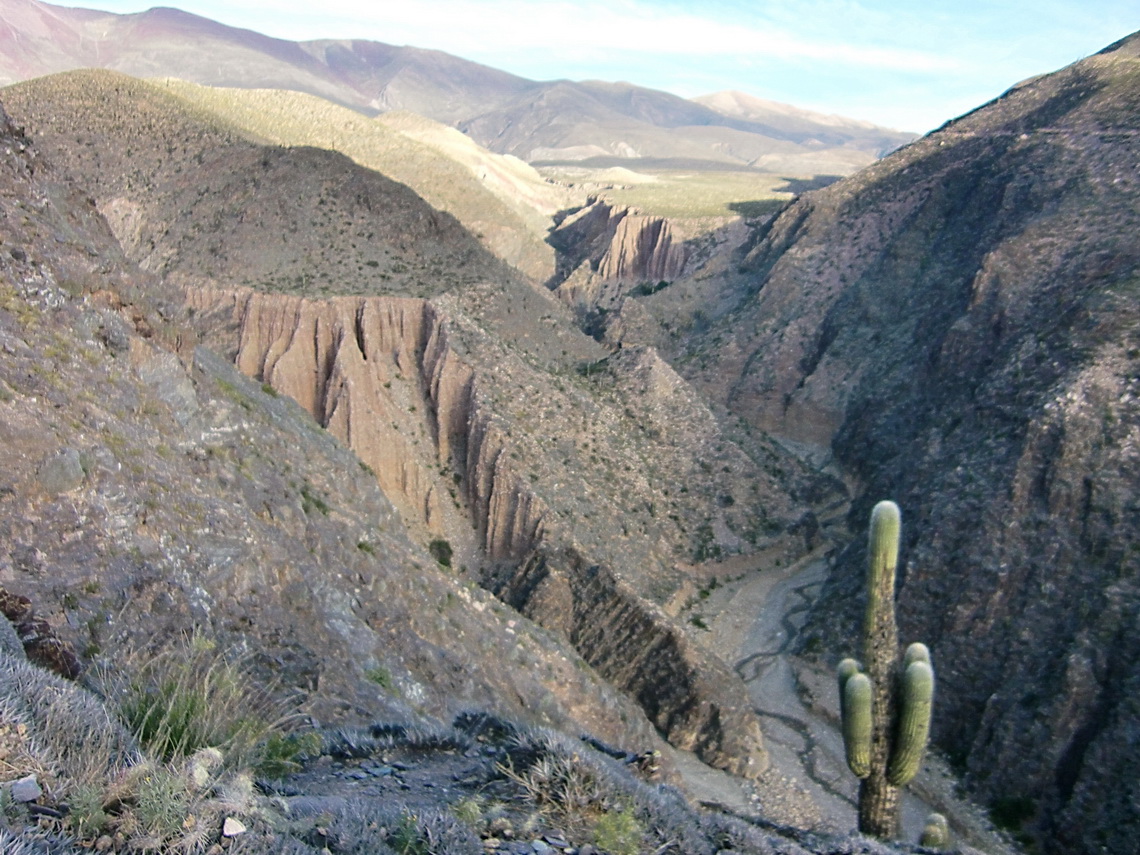 Pucara is a very big area, which is partly restored. But there is still much to do for the next generations of archeologists. It is situated beautifully on a hill and surrounded by enormous cactuses. In Tilcara is a nice archeological museum which describes the historic life in the Quebrada de Humahuaca. 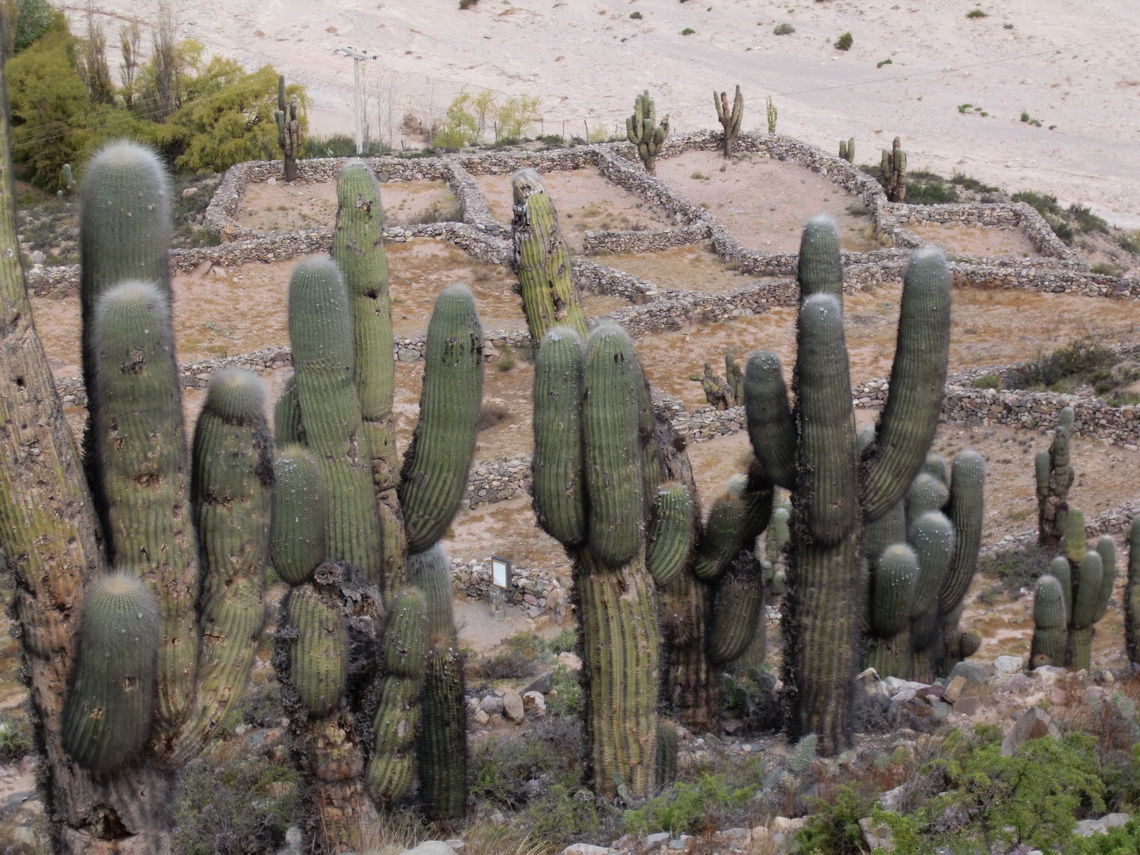