The Sierra de la Ventana is the highest mountain range in the vast province Buenos Aires few kilometers North of Bahia Blanca and 800 Southeast of the capital. There is also the tallest peak close to the Atlantic coast of Argentina, the Cerro Tres Picos with 1239 meters sea level. Ventana means windows: There is a huge one (approx 8 by 5 meters) close to the summit of the Cerro la Ventana. These mountains are supposed to be the oldest in Argentina, but they are relatively rocky.

This region is one of the top holiday destinations with a lot of nature and outdoor activities like hiking, but sometimes a little bit crowded. Some parts of these mountains are protected by the Provincial Park Ernesto Tornquist and consequently regulated by rangers. Ernesto Tornquist is the founder of the biggest town Tornquist in this area. 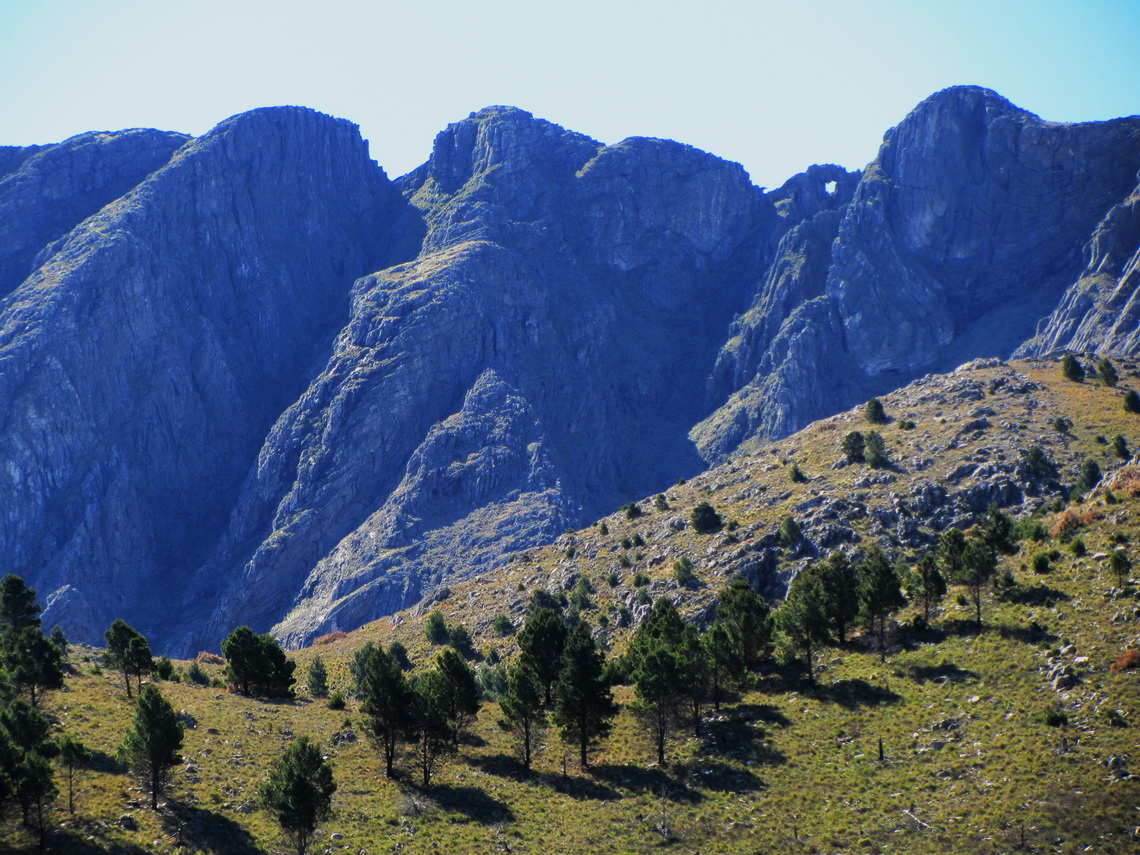 We arrived on a clod rainy day in the small town Sierra de la Ventana, which is the main touristic village in this area. There was free WiFi available and we saw in the net the newly placed geocache GC35K4A - Arcadia Bridge in this area. Soon we found this cache and remarked it in the internet. Immediately the owner responded and congratulated us because we were the first ones who had detected this geocache. Obviously he was happy. 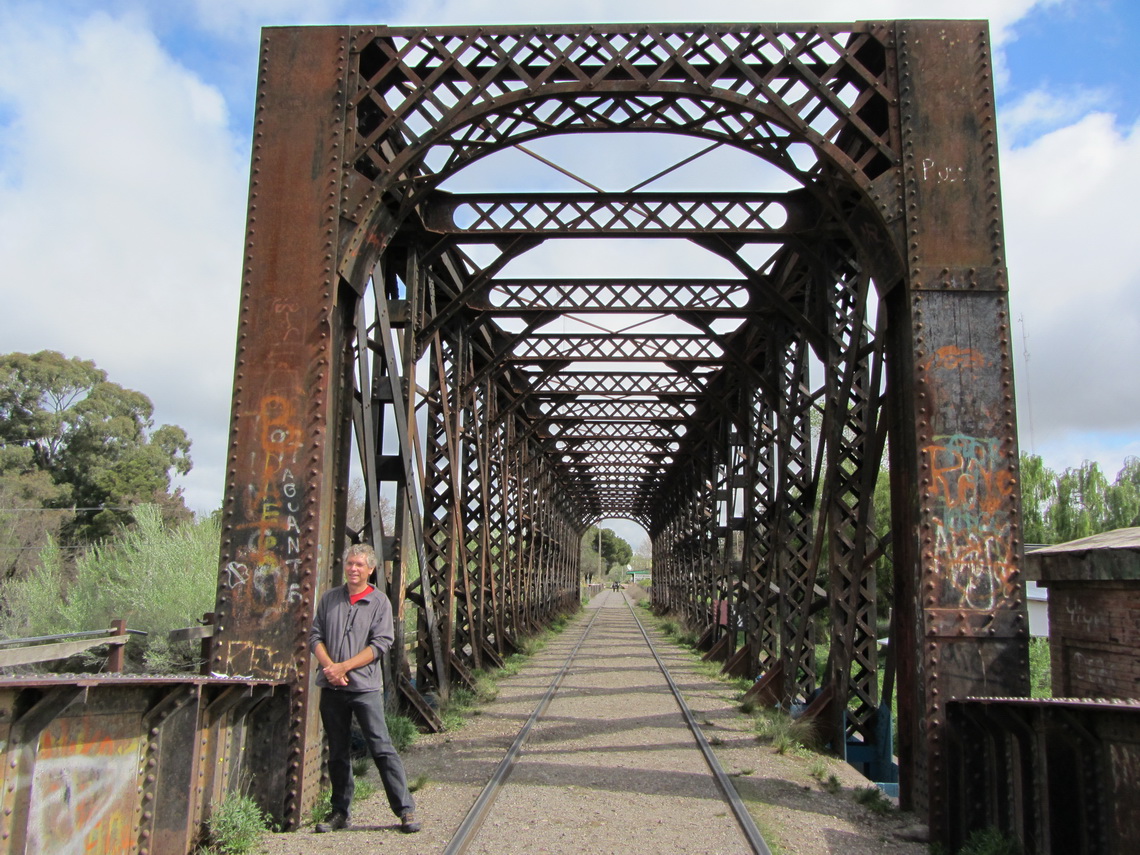 The weather was beautiful on the next day and we wanted to summit Cerro Bahia Blanca in the provincial park. But we had to wait until 12:30PM, because the rangers did not permit it earlier due to wet and glibber paths. This sounded a little bit ridicuolus for a hike of less than 2 hours to a hill of 740 meters, but we saw later people climbing up with sneakers made with fabric and other inadequate shoes. The rangers simply do not want to rescue these people. 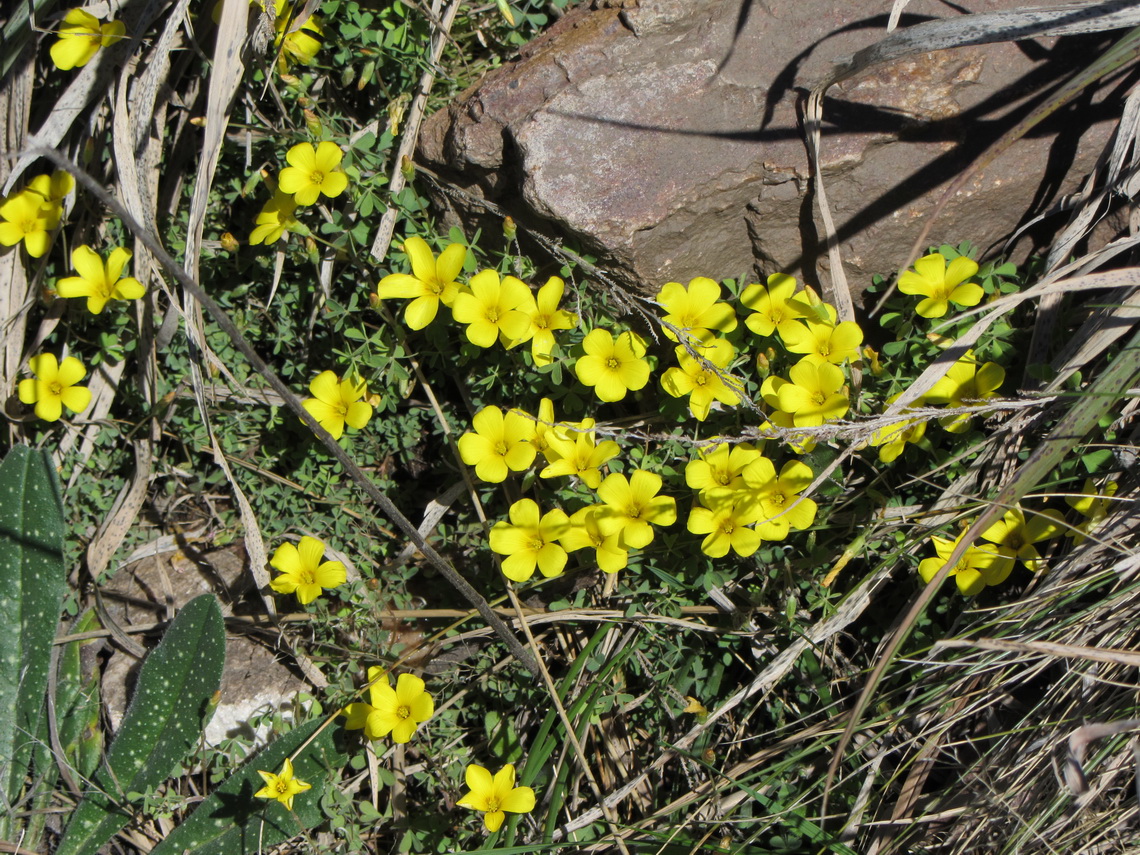 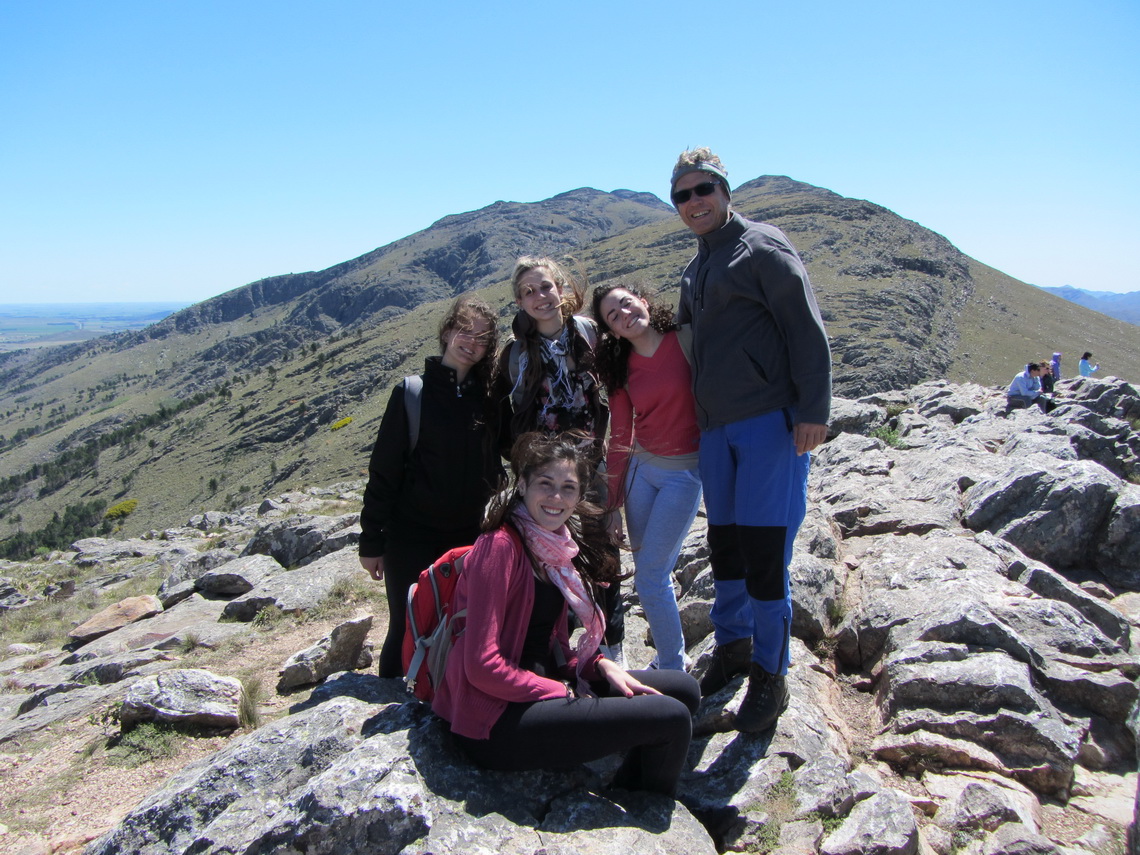 On the next day we wanted to visit the huge window, because the weather forecast was promising. But the ranger told us that it is closed for the next days due to the conditions of the ways. Instead he suggested that we climb up Cerro Tres Picos which should be more beautiful and challenging. It is a two days trip and there is the cave Cueva de los Guanacos close to the summit, which can be used as base camp. And we remembered that there was described the geocache GC1AHG2 - TresPicos in the Internet half the way to the summit.

So we drove to the Estancia Funke, the access of the hike to the Cerro Tres Picos. There are excellent camping facilities managed by Monica, see www.funketurismo.com. Monica speaks reasonable English but after she realized that we Germans she called Thomas, an Argentine / German fellow. Both gave us a perfect description of the way to the Cerro Tres Picos including maps and showing some pictures. Monica strongly recommended that we take also our tent to the base base camp. Thomas invited us for a beer, when we come back from the mountain. Thanks Monica and Thomas.

Early in the morning on the next day we drove 6 kilometers to Gorieta, the starting point of the hike. Thanks to the rain two days ago the road was very sludgy but somehow our car managed this obstacle. There was a huge parking lot at Glorieta. We were the first there but soon others came. and buses full of people. We expected an overcrowded tour and felt better with the tent in our backpack. But we were totally alone on the way to the foot of the mountains over a wide plain. 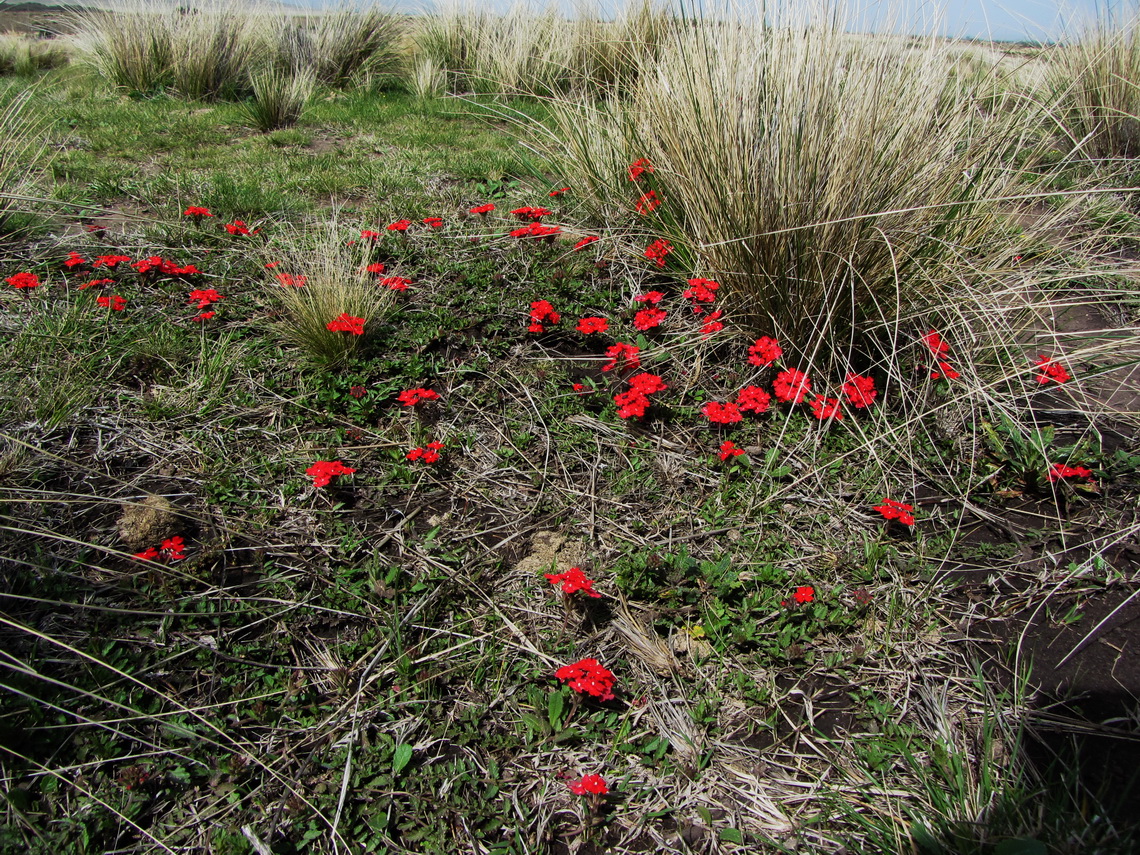 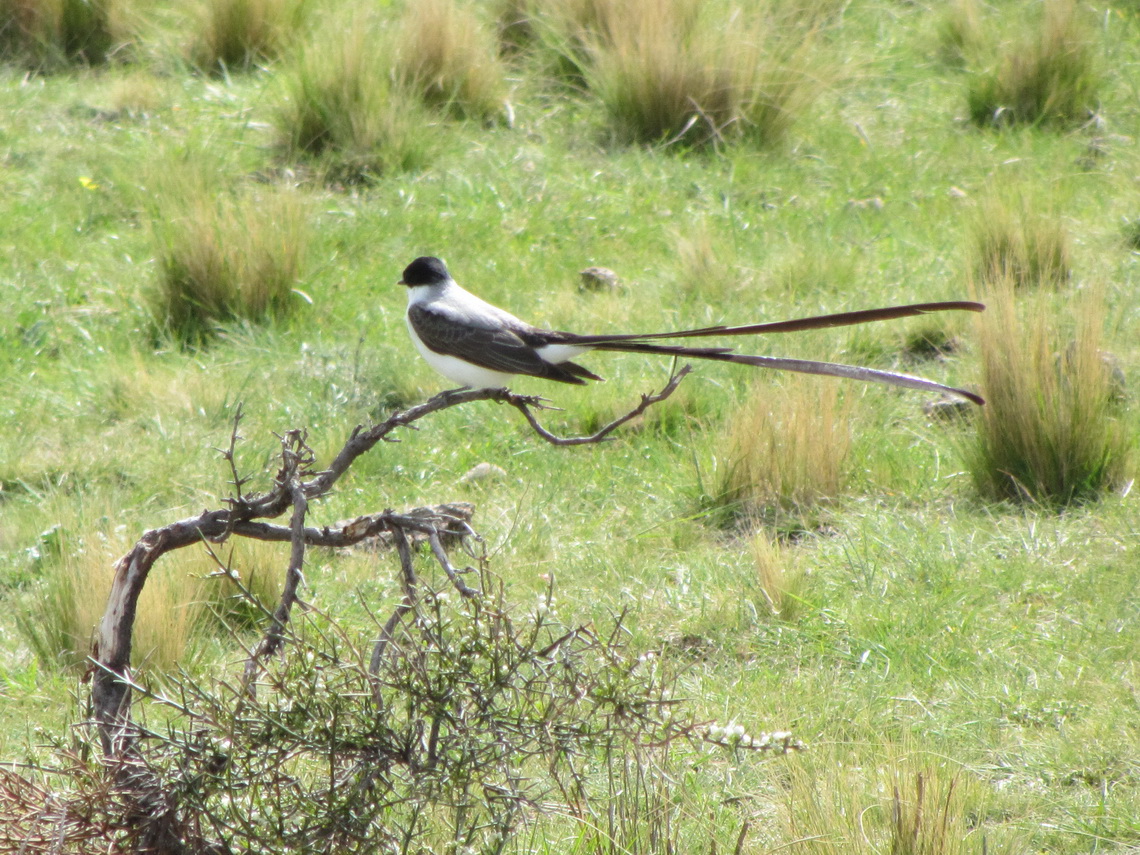 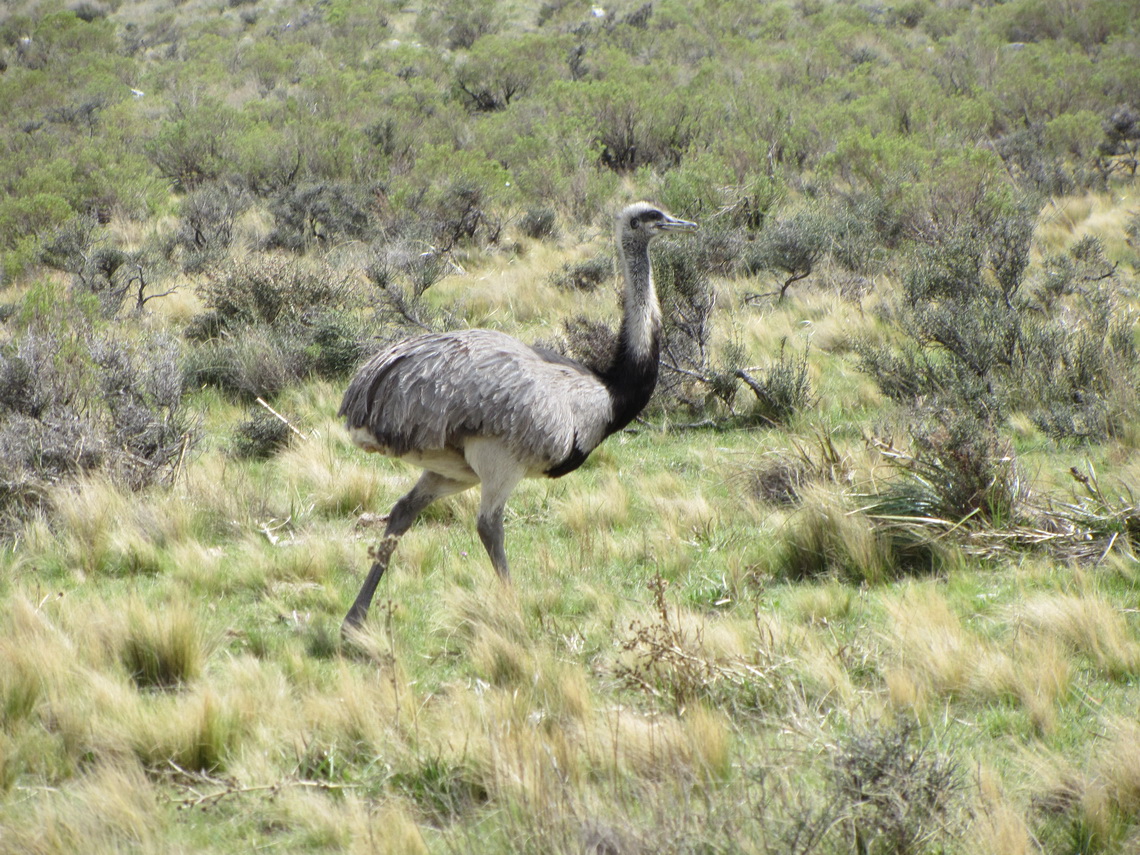 We found the geocache with some important contents like a compass or tongs. 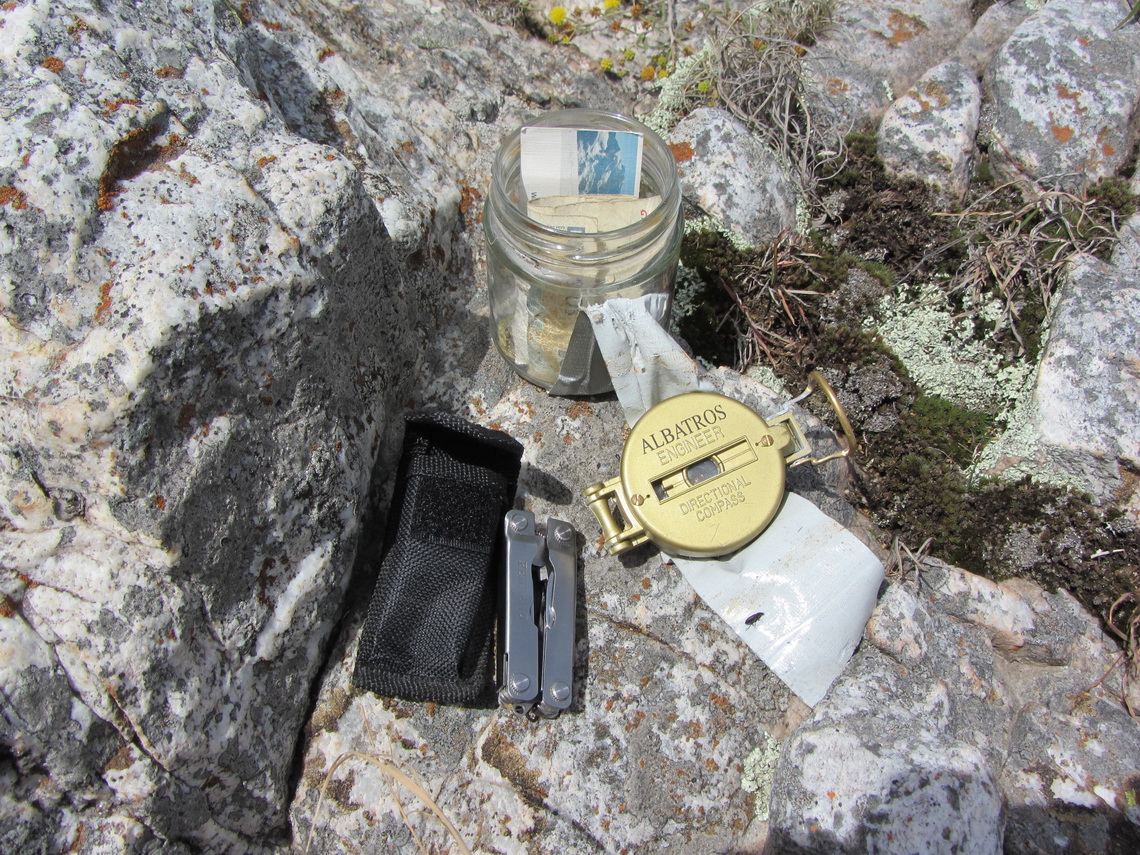 Behind us came a company of younger people; thus we hurried on to the base camp to get a reasonable place. 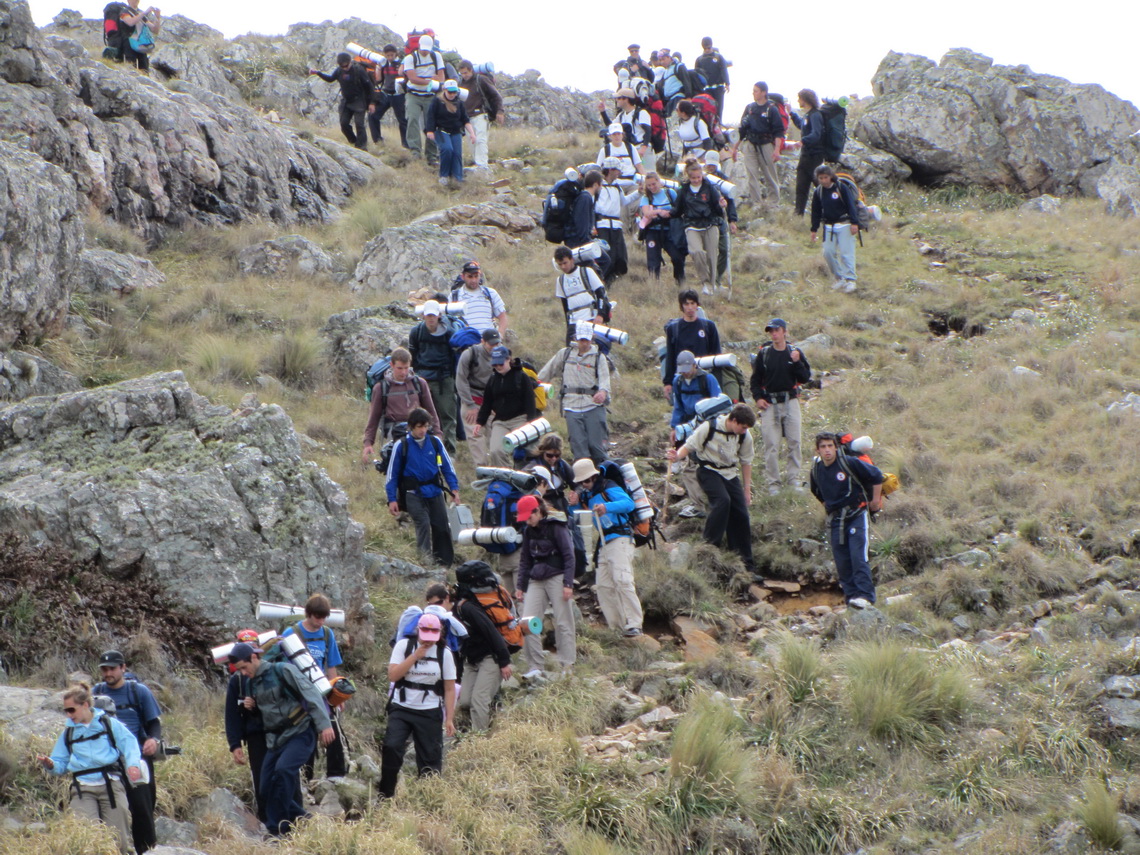 Visibility became more and more foggy like and we felt some some. When we returned we learned that this was caused by a new eruption of the Volcano Puyehue in Chile. The wind blew exactly from this direction. The next day both airports of Buenos Aires were closed due to the ash and our tent was a little bit gray.

When we came to the cave we decided not to camp in it because it was a little bit wet, dirty and muddy. We were grateful about Monica's recommendation to carry the tent with us! 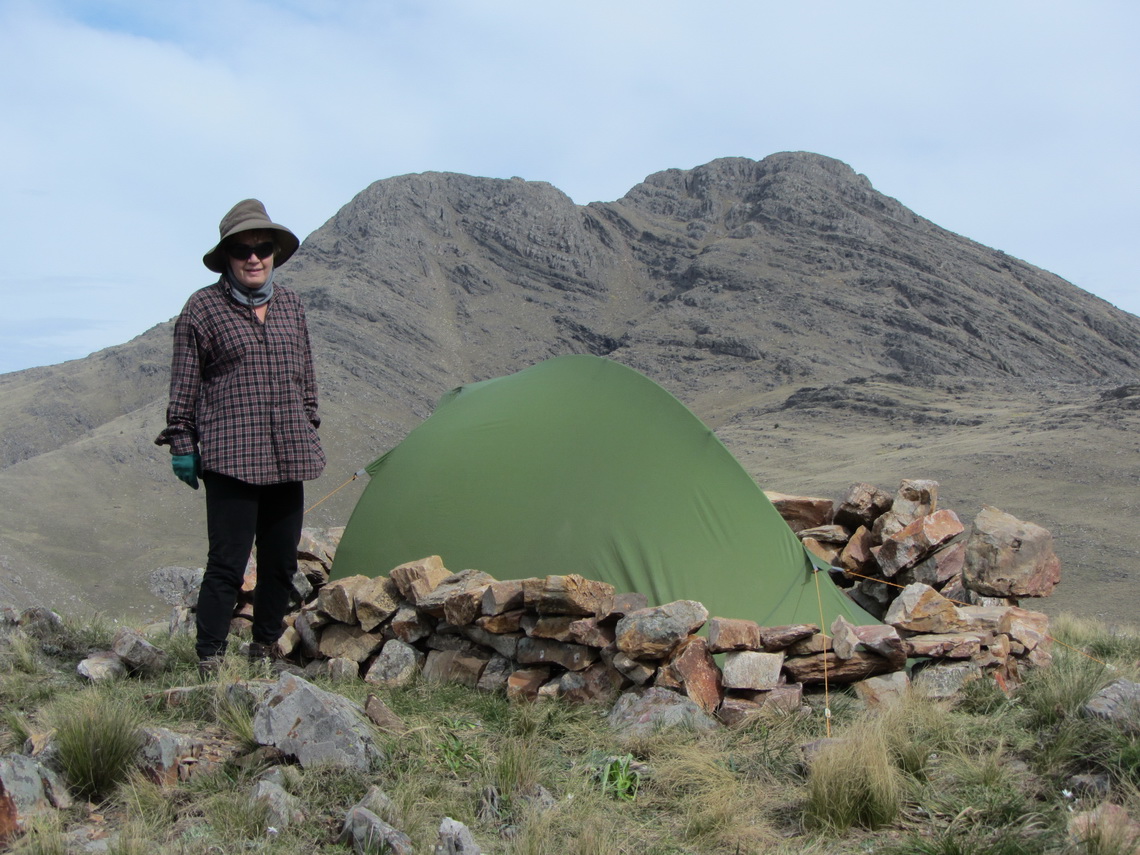 We climbed up the Cerro Tres Picos in the late afternoon. 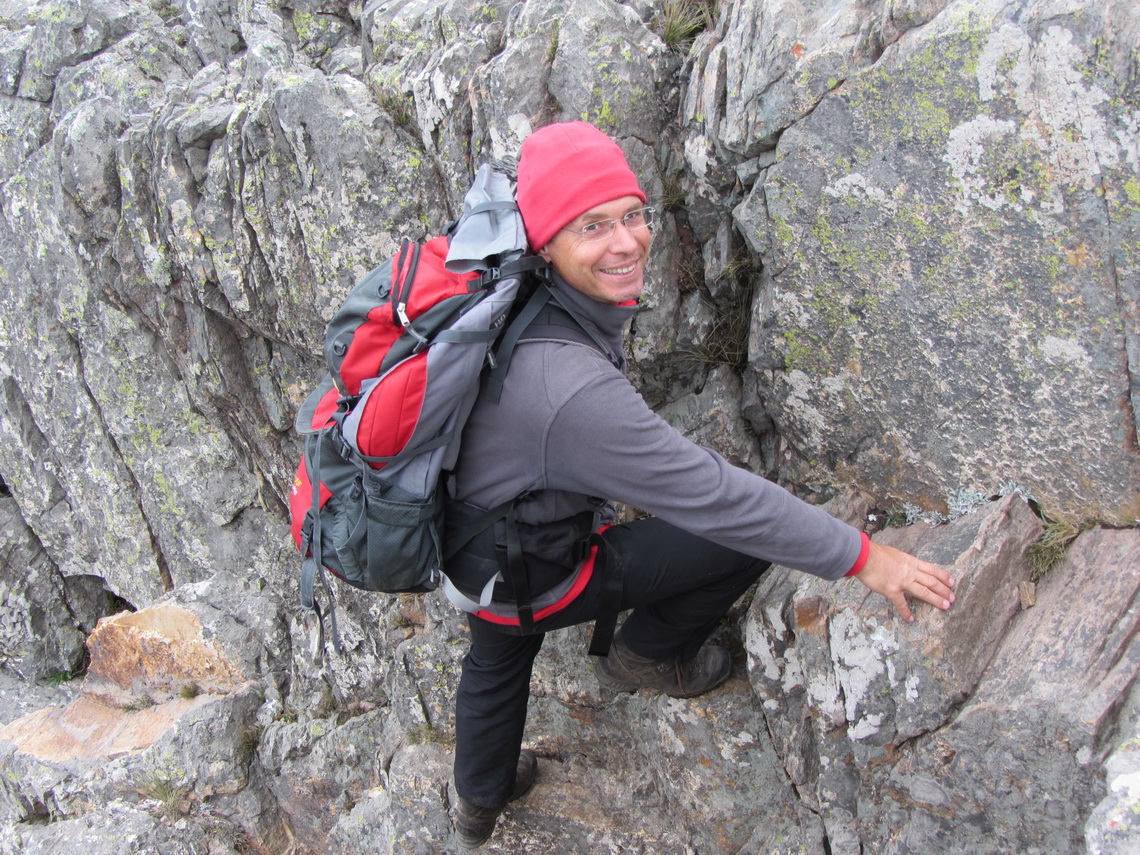 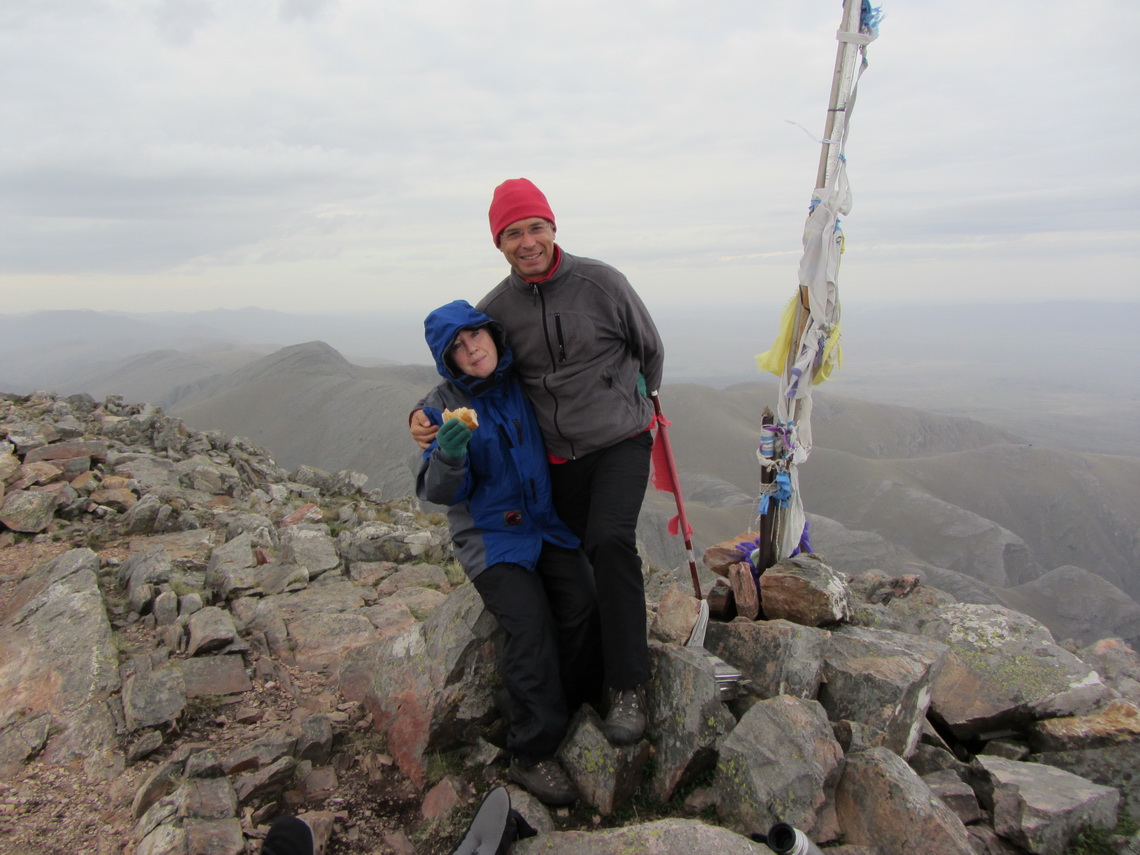 On the way back we had beautiful view to the cave, which was busy now. 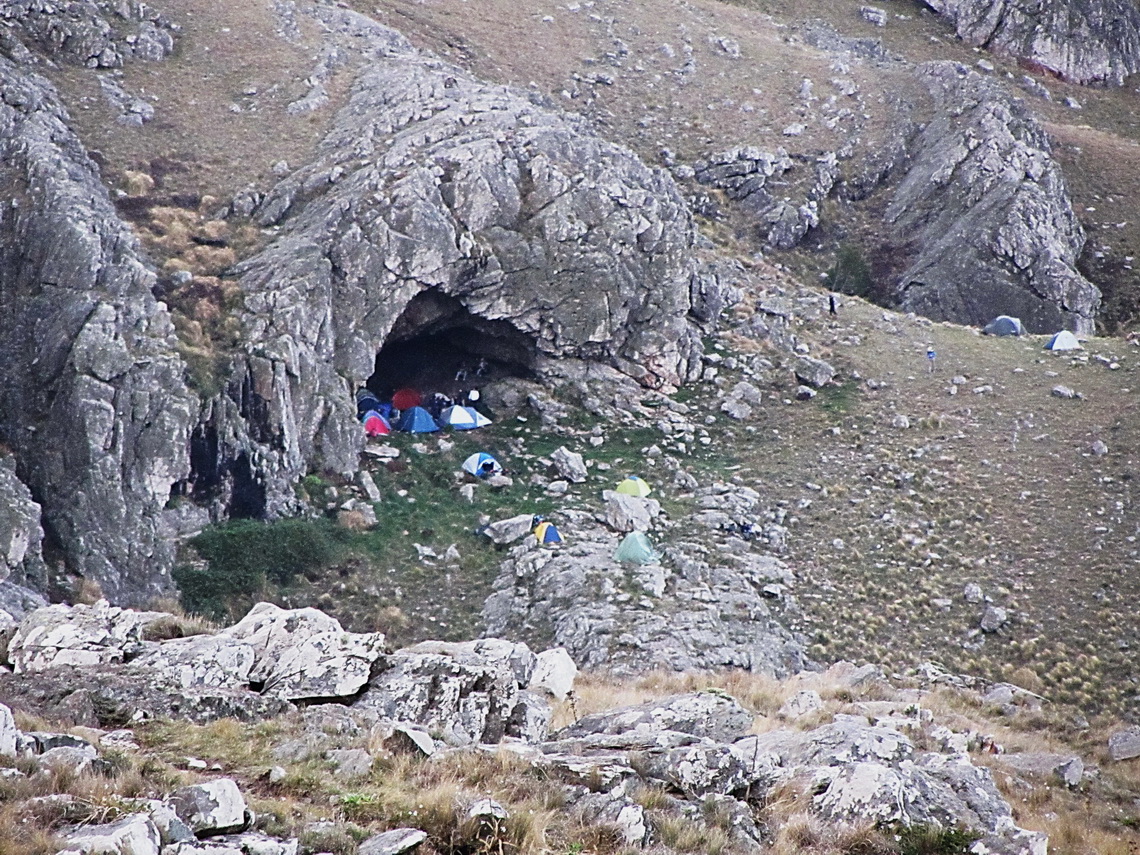 The wind changed in the night; and the dust of the volcano disappearad and the sky was very blue. But we had to clean our tent from the ask. Before we descended we visited the Cerro Naposta. 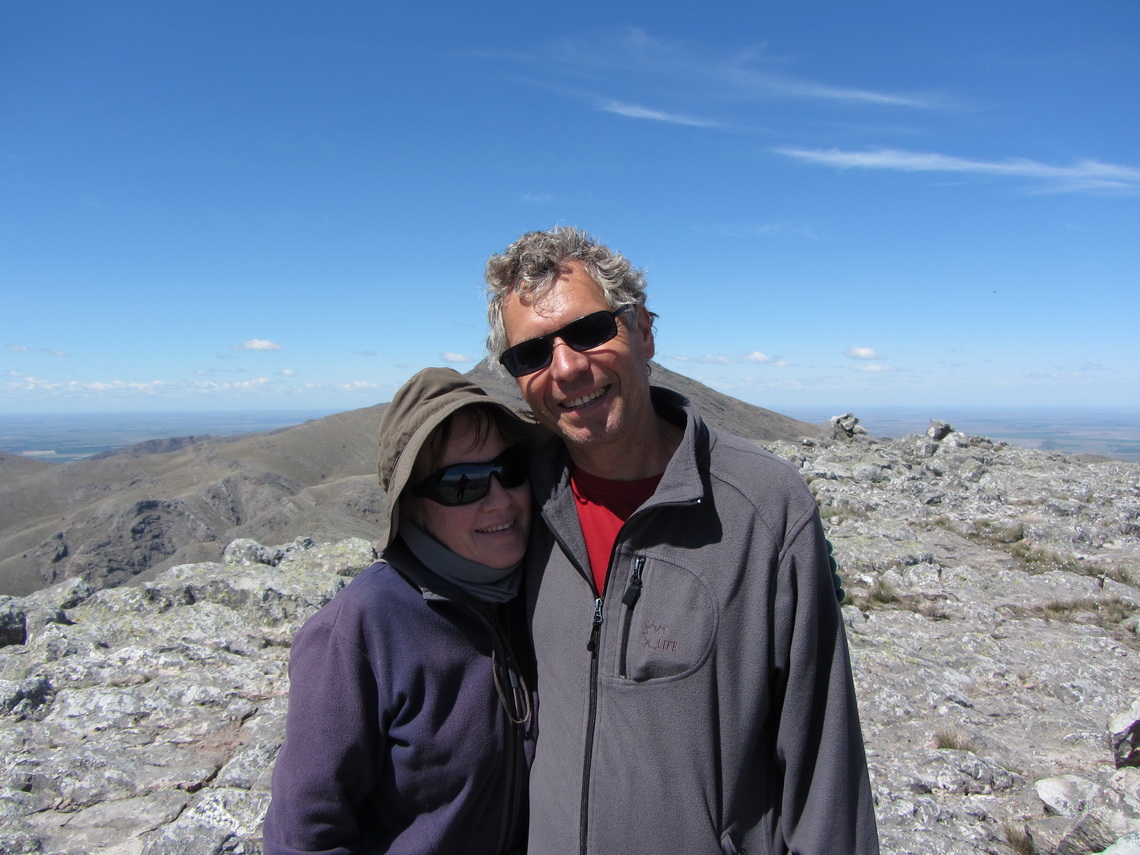 We spent a wonderful evening with Thomas and some beer and learned a lot about the farming live in this area of Argentina. They were happy of the rain, because it had been very dry in the last winter. Indeed it saved their harvest. Armadillos are one of the worst enemies of the rancher because they built deep holes with a diameter of approximately 20cm into the earth in few seconds. There were many accidents with these holes with people and horses like broken legs.

Thomas suggested that we should visit the town Tornquist, which is pretty. 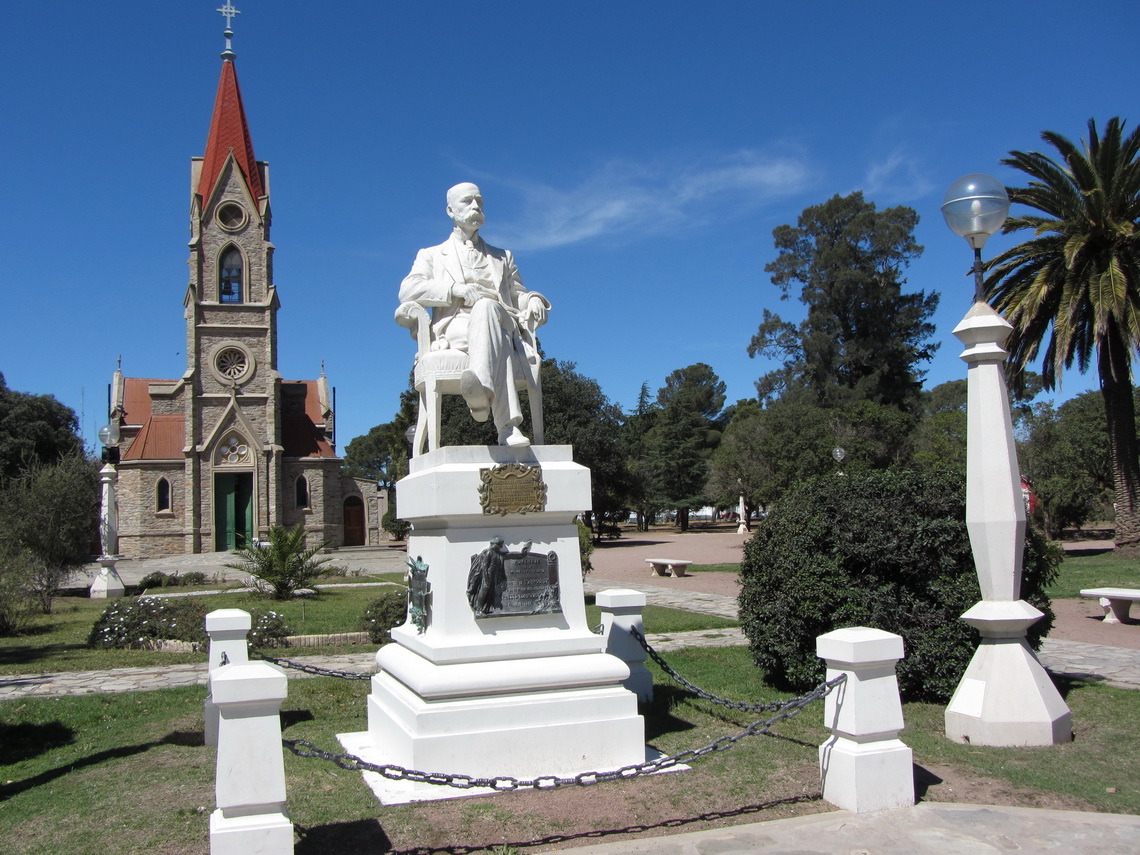