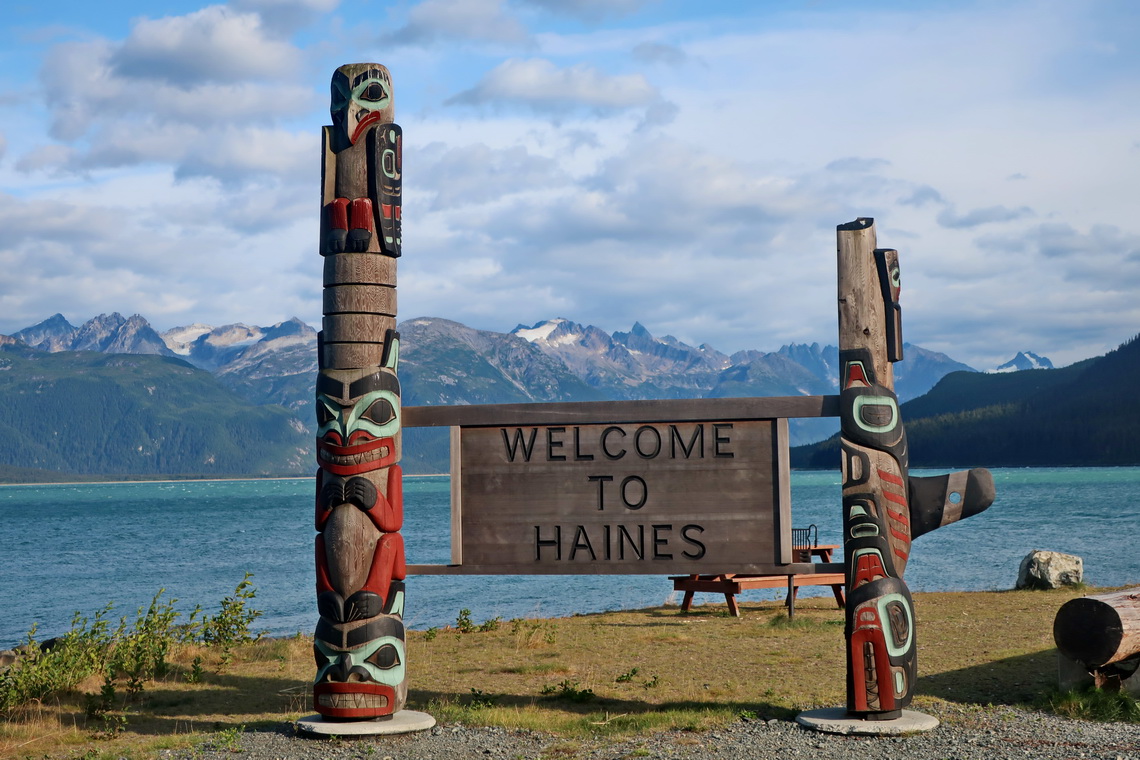 Finally we came to Alaska after we had started our journey in South America more than eight years ago. We had met many nice people, had observed a lot of stunning animals, had seen beautiful landscapes and cities, had climbed up more than 250 exciting mountains and had driven approximately 140,000 kilometers with our little camper.

Our impression about Alaska is that it is everything but cold, at least in summer. We spent more than seven weeks in central and southern Alaska which is accessible by roads. The sun was shining nearly always with temperatures higher than 25°C, and we had just two days with rain. We enjoyed swimming in many lakes with pleasant temperatures, sometimes in front of icy mountains. Our car was full of warm gear like excellent sleeping bags which we never needed. 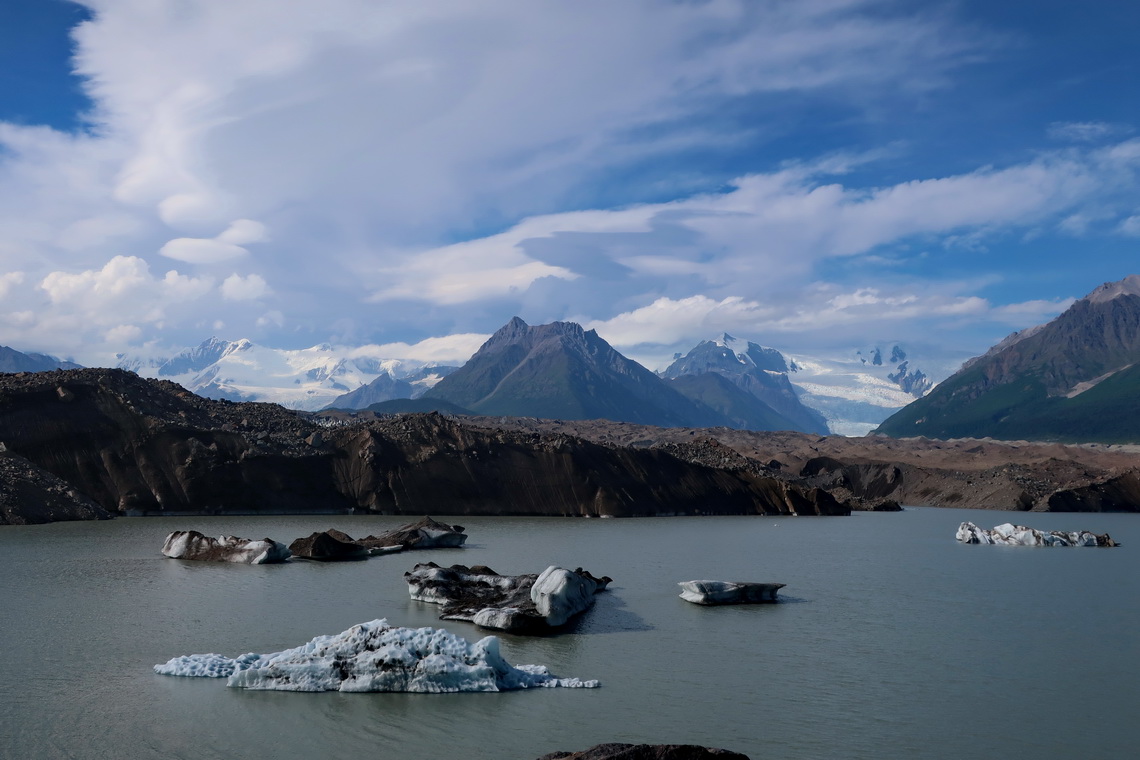 Alaska was Alfred birthday present because we crossed its border on June 23rd 2019. We celebrated both events in the only bar in the "Downtown" of Chicken which is an old gold mining town with seven inhabitants based on the census 2010. 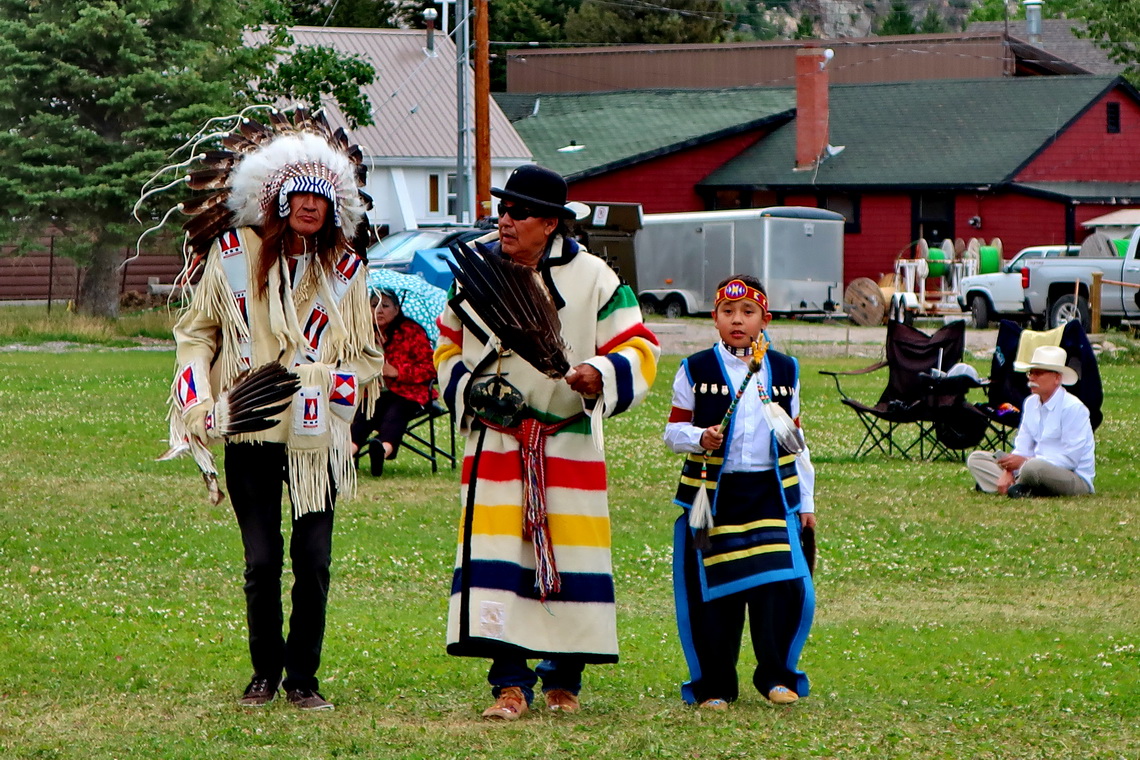 We saw incredible much wildlife in the beautiful mountains of Wyoming. This state is adored with two famous National Parks - Grand Teton and Yellowstone, and many wilderness areas like the majestic Absaroka, Bighorn and Windriver Ranges with the tallest summits of the Rocky Mountains outside of Colorado. There is no bigger city in Wyoming, just half a million people are living on 253,000 square kilometers (2/3 the size of Germany!). 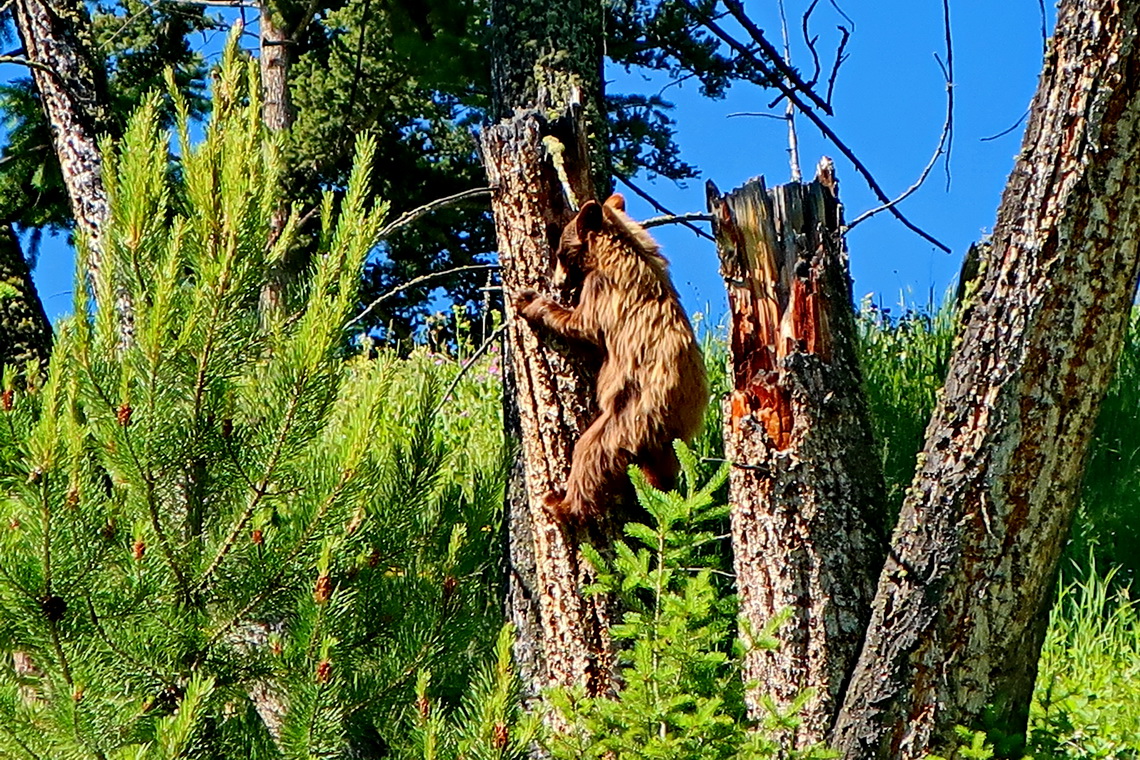 Our first impression of Wyoming was Japanese because we were stopped on the highway close to Laramie by a twin of our car full of Japanese men. They were so excited seeing a European Volkswagen Camper based on EuroVan which is the US version of the European Transporter T4.

American people measure altitudes in feet, thus 14ers are important for them (more than 14,000 feet - approximately 4270 meters sea-level). All 58 14ers of the Rocky Mountains are in Colorado. More than 500 summits exceed 4000 meters sea-level. Its tallest point Mount Elbert (4401 meters sea-level) is the second highest summit of continental USA (without Alaska) after Mount Whitney in California. 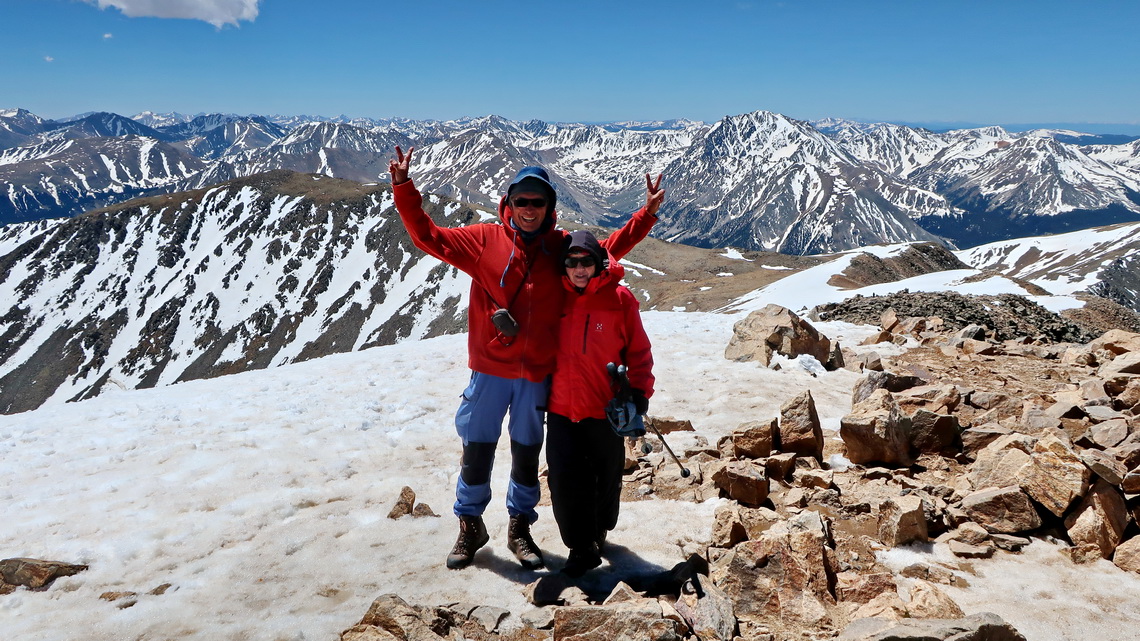 End of March 2018 we came the first time to the Rocky Mountains via the highway Interstate 40 between Great Junction and Denver. We had taken our skies from Germany and we were eager to do some Ski Mountaineering. Unfortunately the conditions were everything but good because it was very stormy, cloudy and much to warm. In the year 2018 the southern Rocky Mountains received unusually little snow. Many ridges up to 4000 meters sea-level and more were without snow. However we did two nice tours in the Front Range close to the Eisenhower Tunnel and in the Vazquez Peak Wilderness Area. 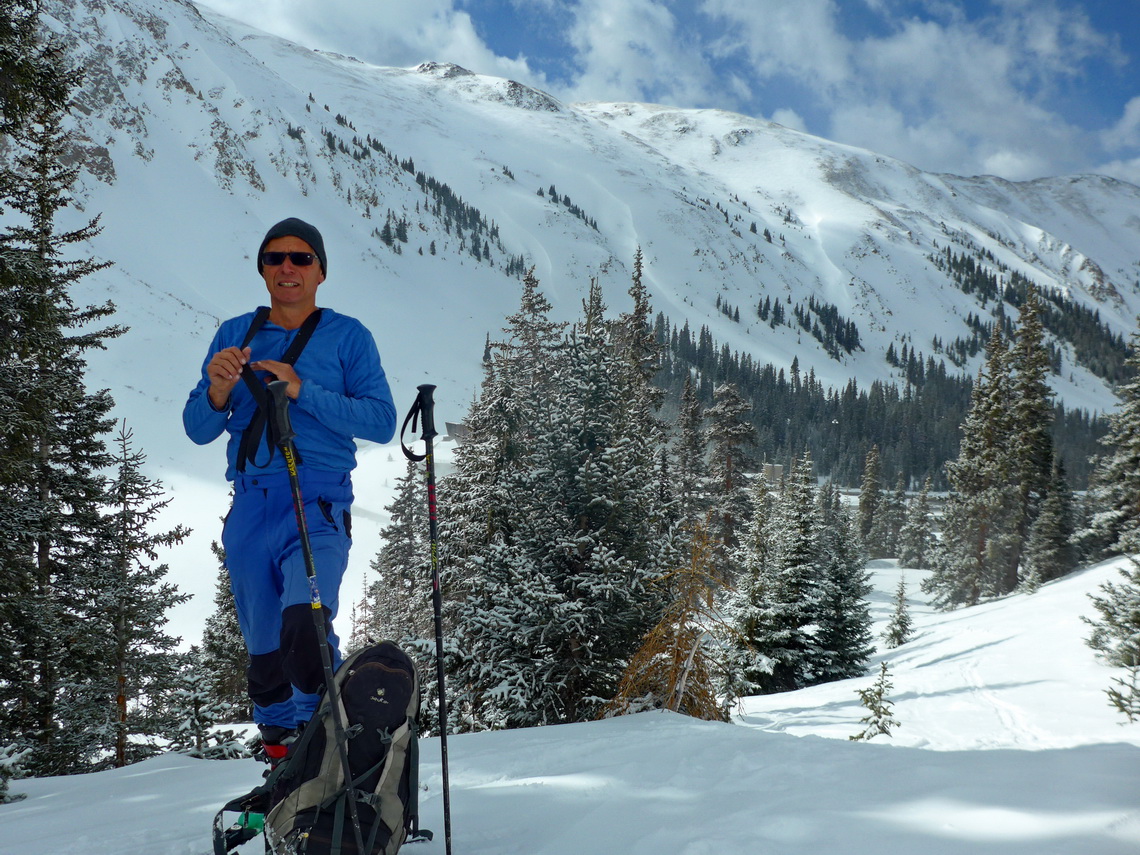 We came back again to the Colorado Plateau from the south via northern Arizona where some marvelous parks and areas are located. It is mainly the land of the indigenous Navajo Nation which is with more than 300,000 people the second biggest native tribe in USA. In this region we saw many stunning cliff dwellings of the ancient people built approximately 1,000 years ago. It is still a secret why most of them were left around 1300.

Thanks to Marlboro, many (western) movies and film stars like John Wayne Monument Valley is one of the most famous parts of North America. It is managed by the Navajo people and shows in addition to the overwhelming landscape actual and historical Navajo life in an impressive little museum. 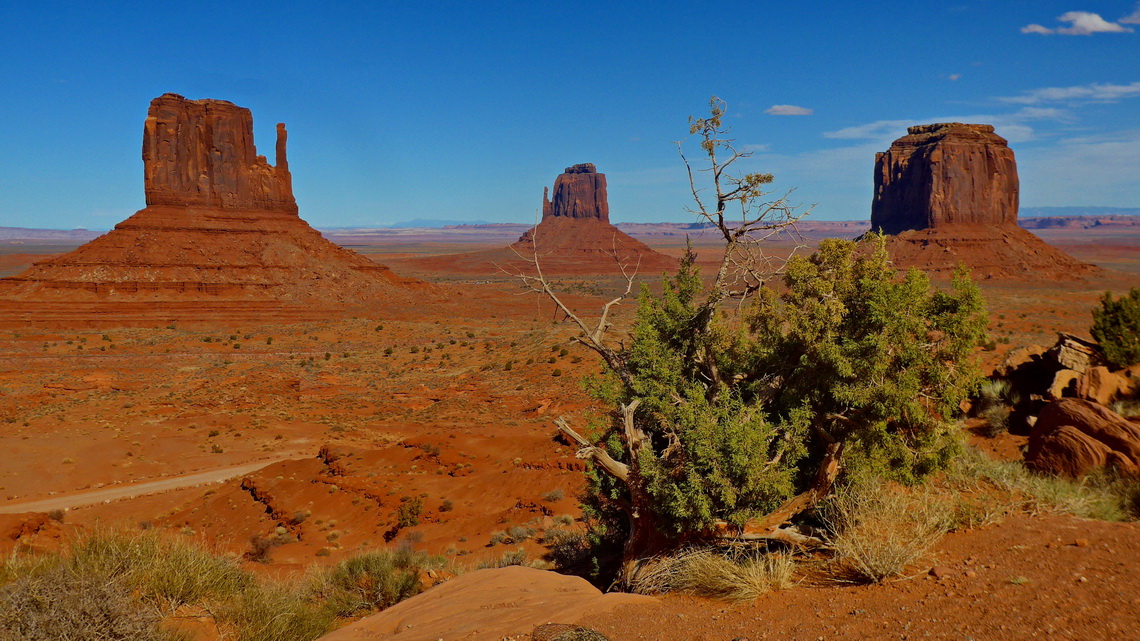 Remarkable are 400 Navajo Code Talkers which played a famous role during World War II by relaying radio messages using their own language, which the Japanese were unable to understand.

Our first stop was the beautiful Petrified Forest National Park with colorful specimens from small shards to massive trunks of a prehistoric forest in the arid Painted Desert.

Grand Canyon is one of Earth's most powerful inspiring landscapes overwhelming the senses. It's system of gorges created by the mighty Colorado River, 450 kilometers long, up to 27 kilometers wide and up to 1,600 meters deep. In addition to its beauty it's full of live, an island in an arid environment. People lived there for more than 12,000 years. Thanks to the high elevation change a wide range of plant and animal communities are found on its slopes. 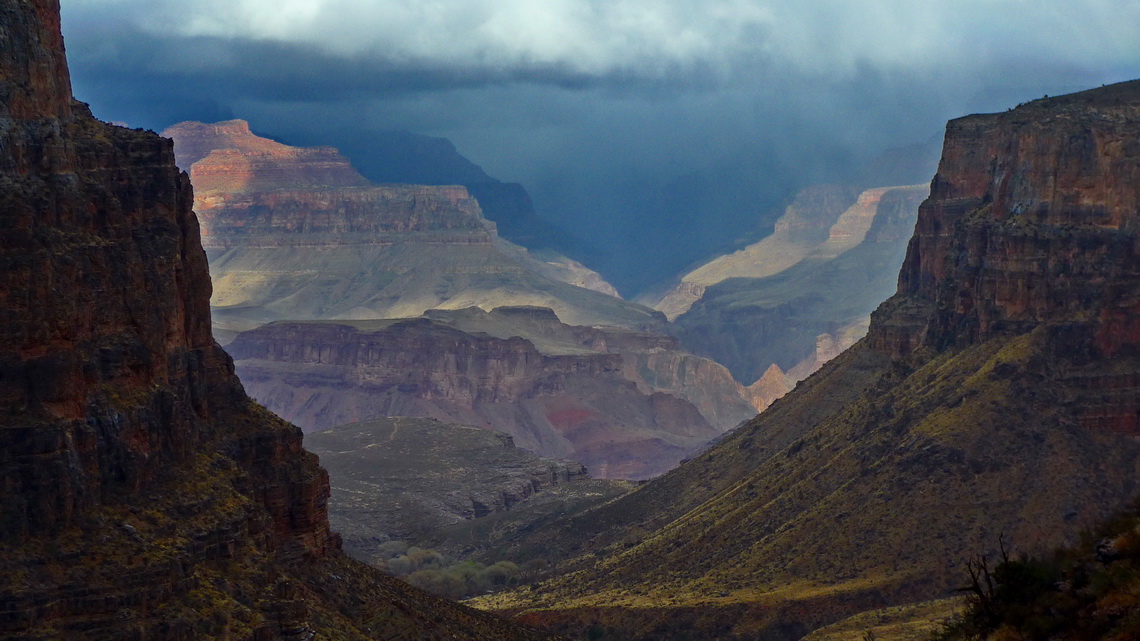 To avoid the usual crowd of visitors we came mid of February 2018 to the south rim of Grand Canyon. Sometimes it was a little chilly in the morning on the 2,200 meters high plateau (up to -9°C) and we enjoyed some snow.

We came back to Las Vegas on December 19th 2017 and disaster started on the next day: Our little motor-home which we had stored in Overton did not start. First we exchanged the battery, then the starter, then the engine, then the exhaust manifold and so on. We stayed in the Las Vegas region much longer than we had planned - until beginning of February 2018. But this mess gave us the chance to enjoy the American way of Live and to explore Las Vegas including its marvelous environment with many mountains in depth. 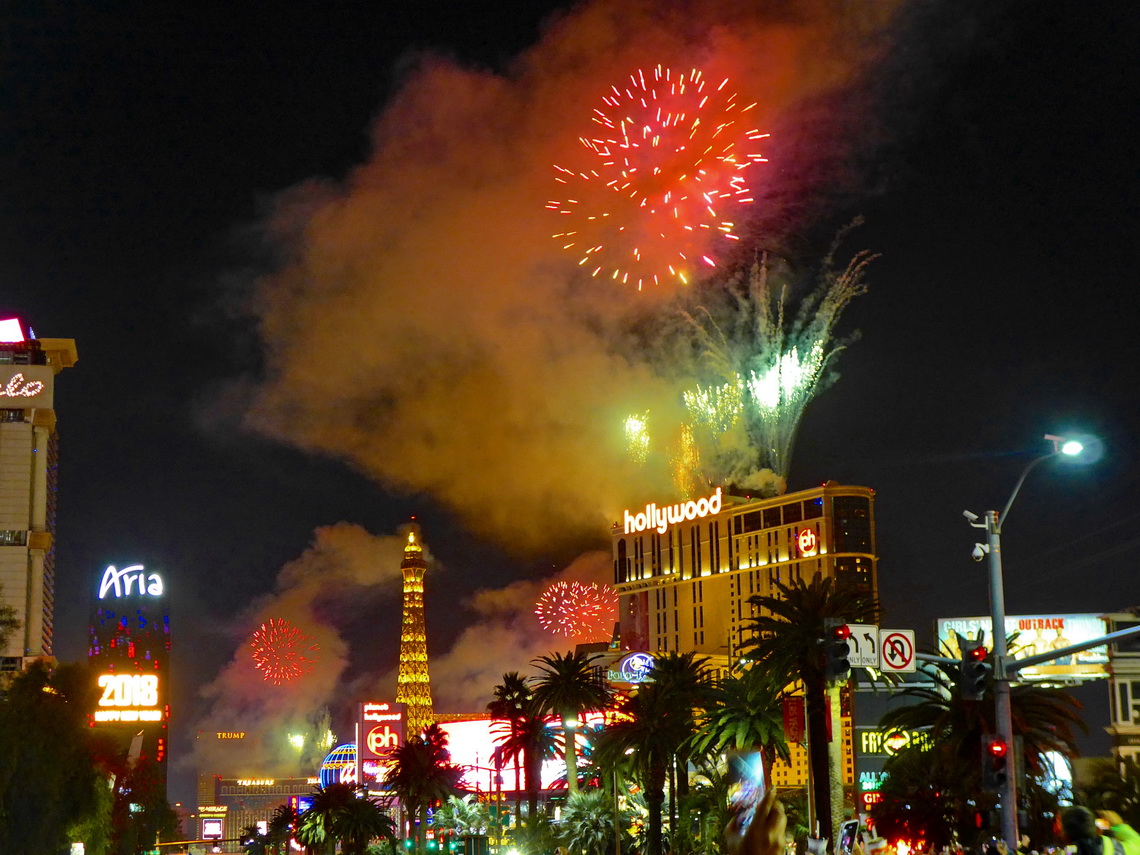 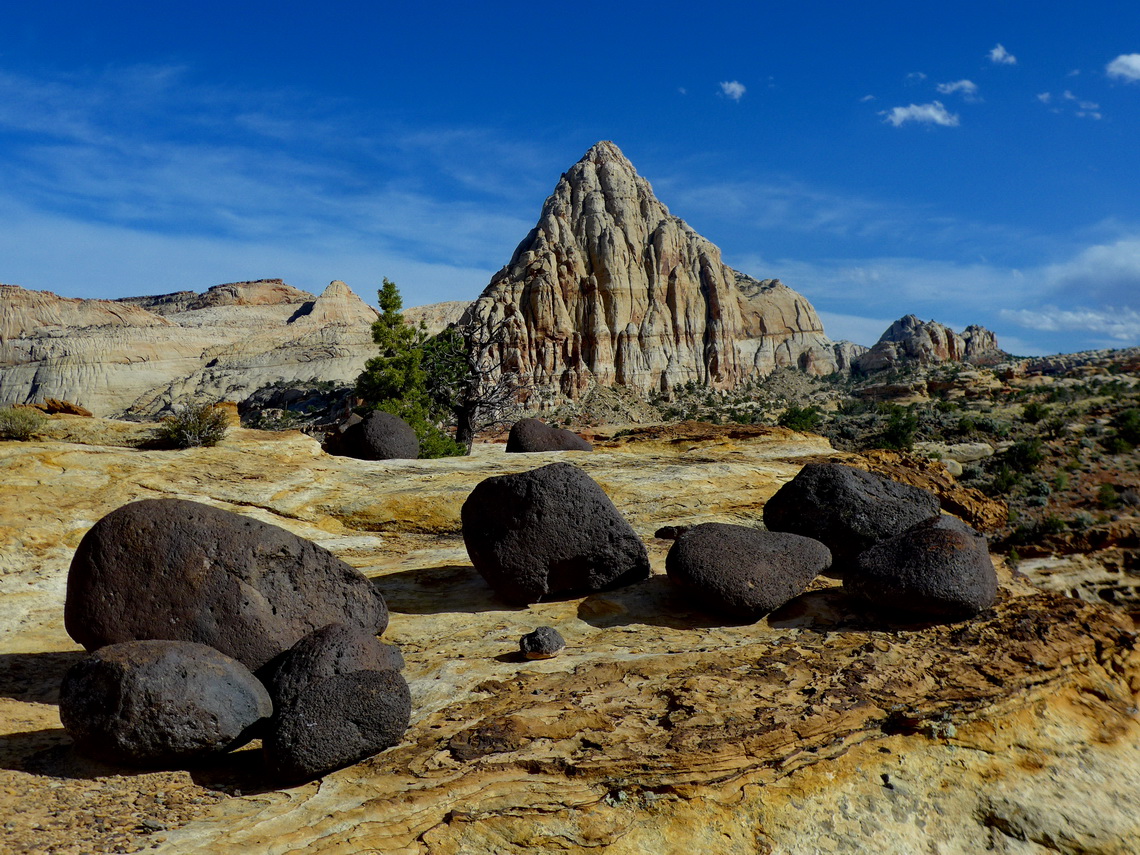 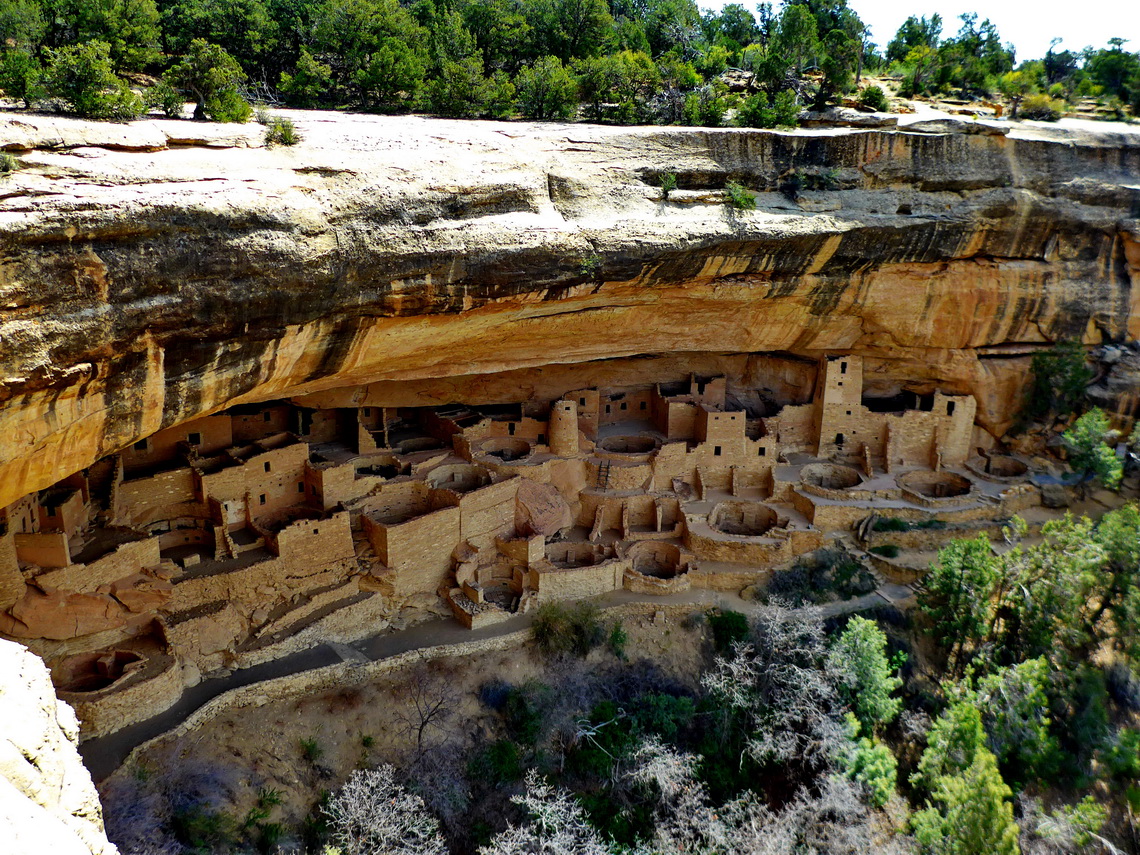 The beautiful and pristine state New Mexico has a lot of different landscapes: Dry deserts and wilderness, lush valleys, and tall and snow-capped mountains. 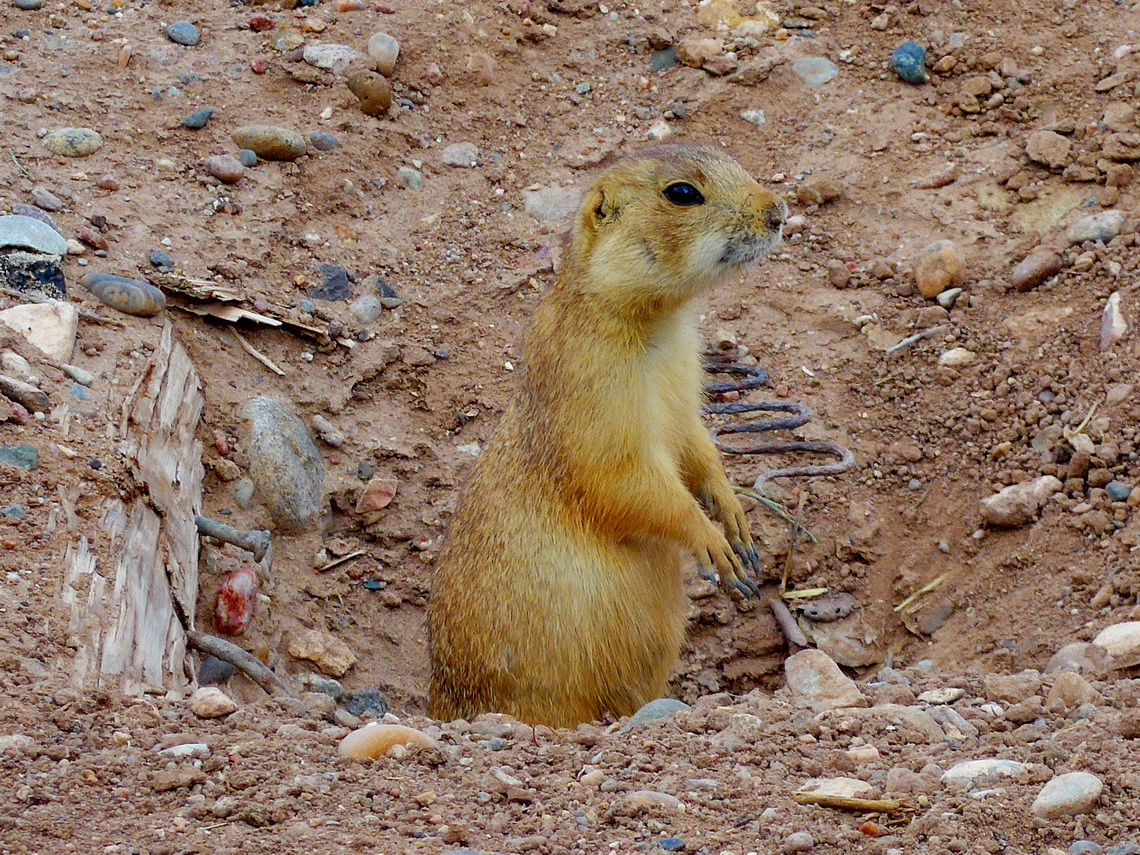 And it is full of history. The first nuclear bomb was developed and tested in its southern deserts. New Mexico's capital Santa Fe was the hub of the railway in the late 19th and early 20th century which connected the East and West of USA. Most fascinating is the Indian art and culture of the indigenous people. The World Heritage Site Chaco is in line with southern touristic magnets of the Maya and Inca monuments. The Anasazi people built a lot of villages, cliff dwellings and cave houses mainly between 800AD and 1100AD. 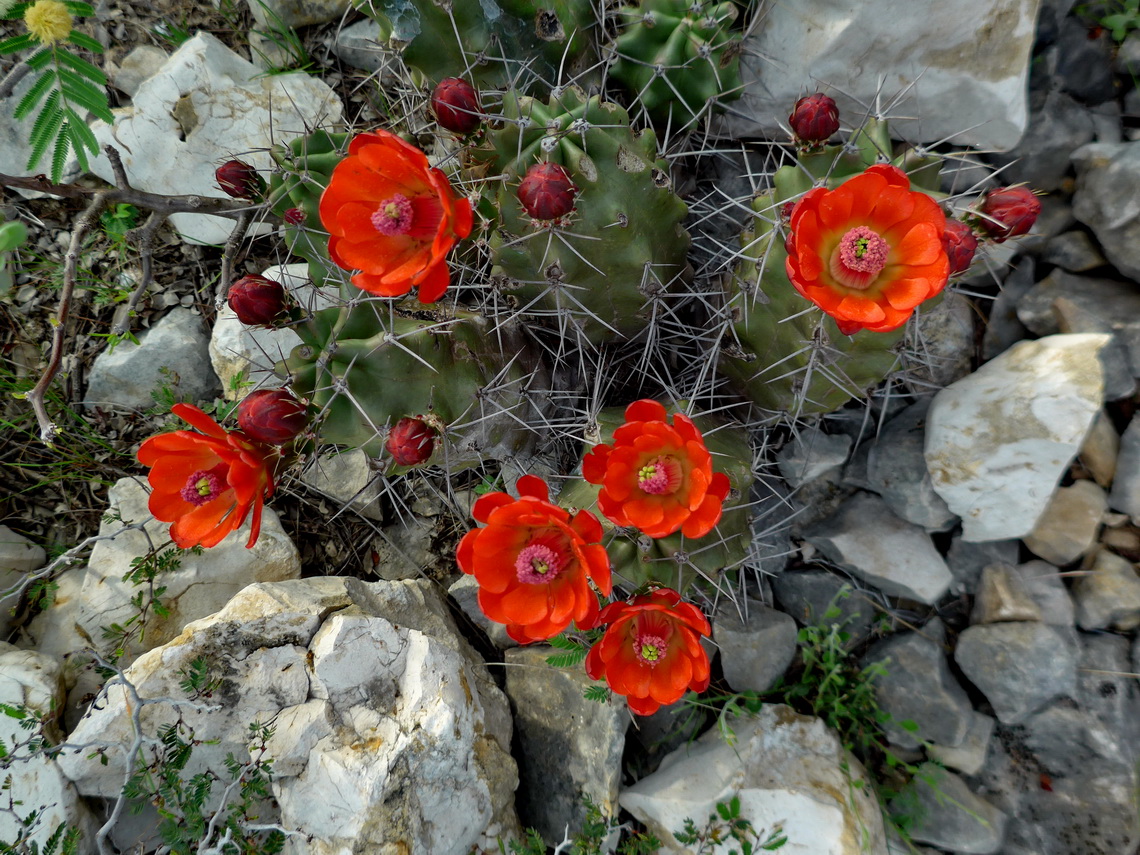