The Galapagos island are famous for its enormous biodiversity. Is it one of the place on earth with the highest level on endemism, for instance 97% of the reptiles are found nowhere else. Due to its remoteness most animals are everything but shy. It is a perfect place to watch incredible many, different and nice birds, reptiles, turtles, sea lions and others. In addition its marine fauna is fabulous; there are excellent snorkeling and diving opportunities. In 1835 Charles Darwin started on Galapagos his work of the theory of evolution by natural selection. 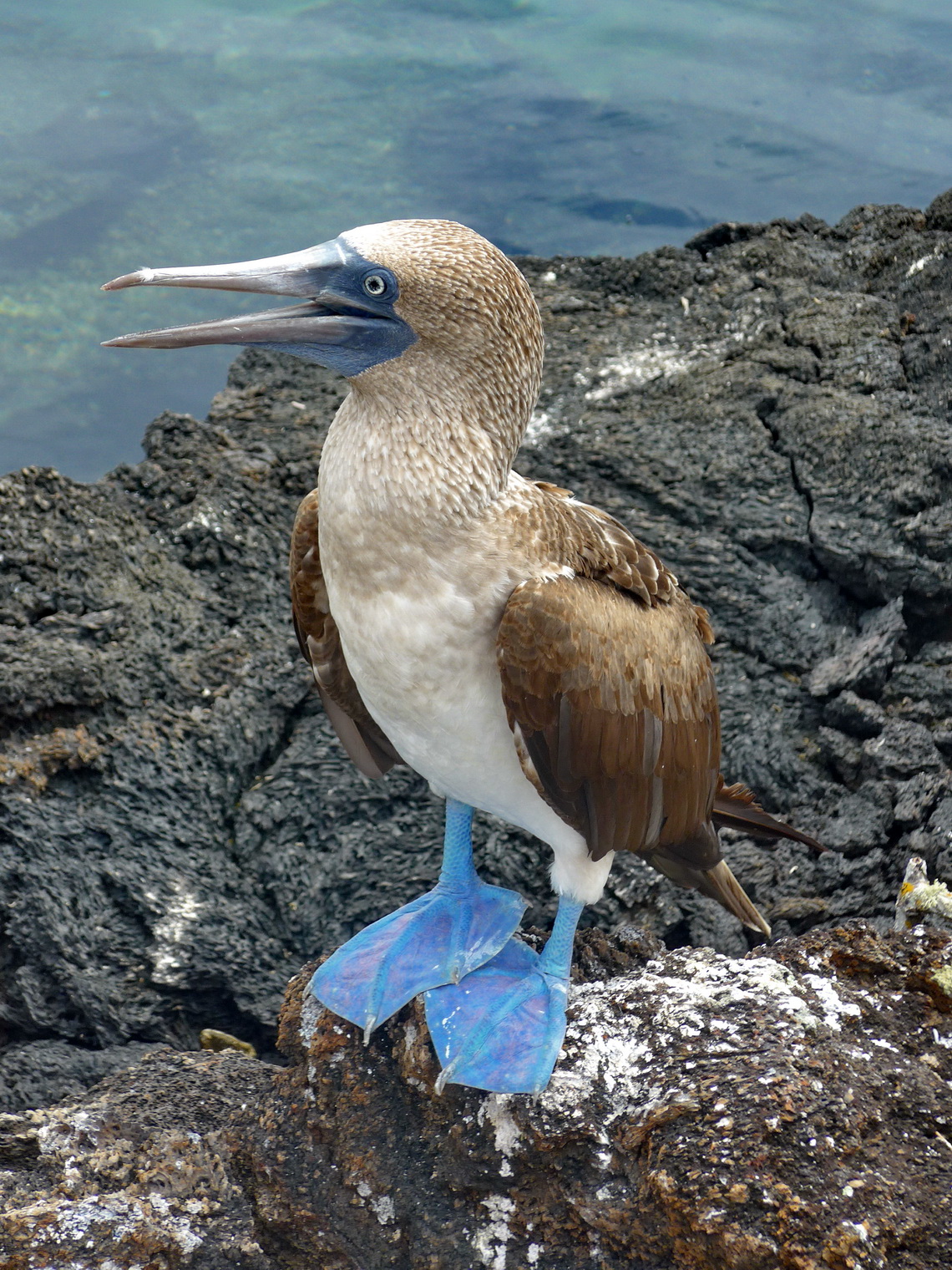 The islands are 900 km west of Ecuador's shore and located on the Nazca tectonic plate on a hot spot which is moving, yet. Their origin is caused by volcanic activity, which is still ongoing with eruptions in the western part. Usually clouds are coming from the south and sticking on the single volcano of the major islands. Just the largest one, Isla Isabela consists of six. Only there human settlement is possible on the larger island. All other sides of the volcanos and smaller islands are pristine and hostile deserts without any fresh water.

Compared to mainland Ecuador Galapagos is relatively expensive. Its entrance fee is 100U$ plus 10U$ handling charge. We found flights from Quito for approximately 450U$ per person. Very expensive are cruisers e.g. we had offers for more than 2000U$ per week in the low season! But you can do a lot without any guidance on the main islands, especially on San Cristobal and Santa Cruz.

We arrived with Marion's brother Tommy in the main and major tourist town Puerto Ayora of Santa Cruz island the early afternoon on November 29th 2014. The more you go away from the expensive waterfront the prices are becoming better. We found good restaurants upward the street to the airport, where we got full meals including fresh juices for 4U$. Accommodation in a 3 bed room with private bath was available for 15U$ per person in the Miconia House (GPS coordinates: S0° 44.739' W90° 18.773'). After storing our luggage in the room we took a boat taxi to the other side of the port and hiked 1 hours to the crevices Las Grietas, where we did our first snorkel - stunning! The trail is included in the GPS coordinates file of Ecuador.

Early next morning we took a taxi for 10U$ to little village Santa Rosa and wandered the whole day a circle to the turtle center El Chato, where more than 3000 giant tortoises live in their natural environment. This superb trail is included in the GPS coordinates file of Ecuador. 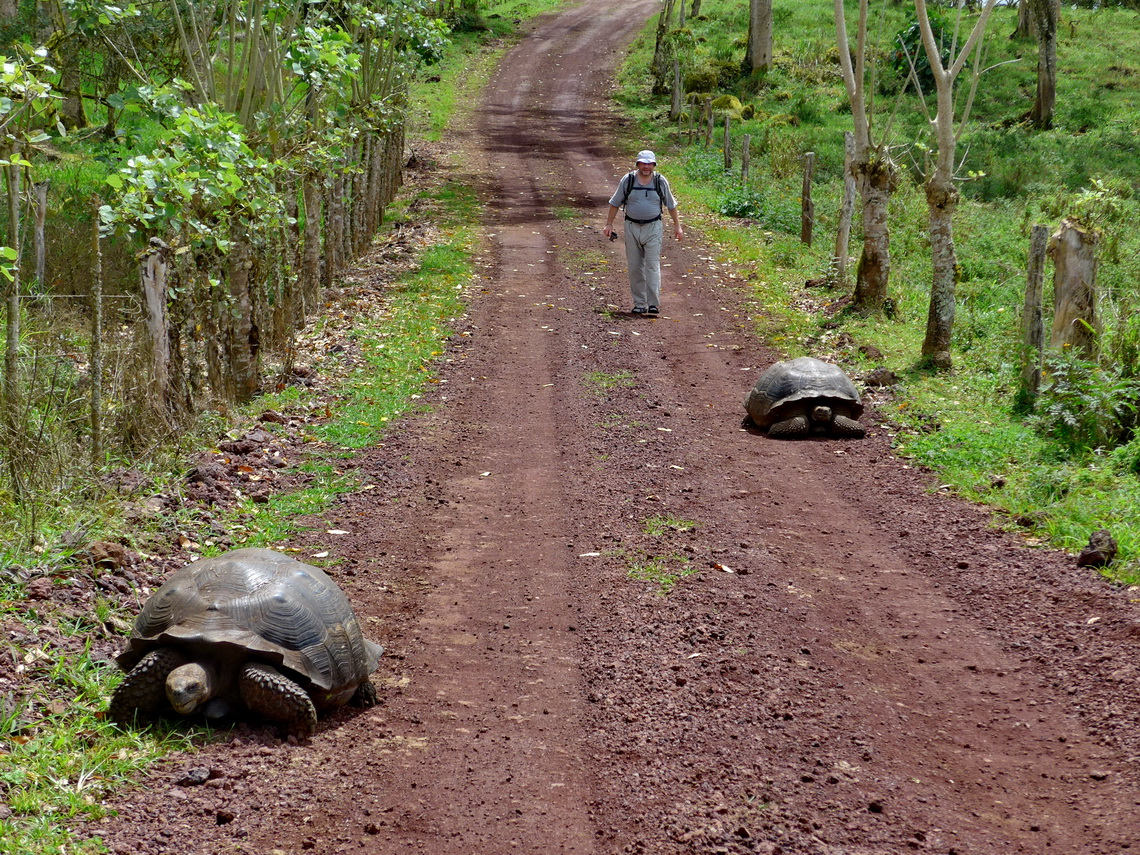 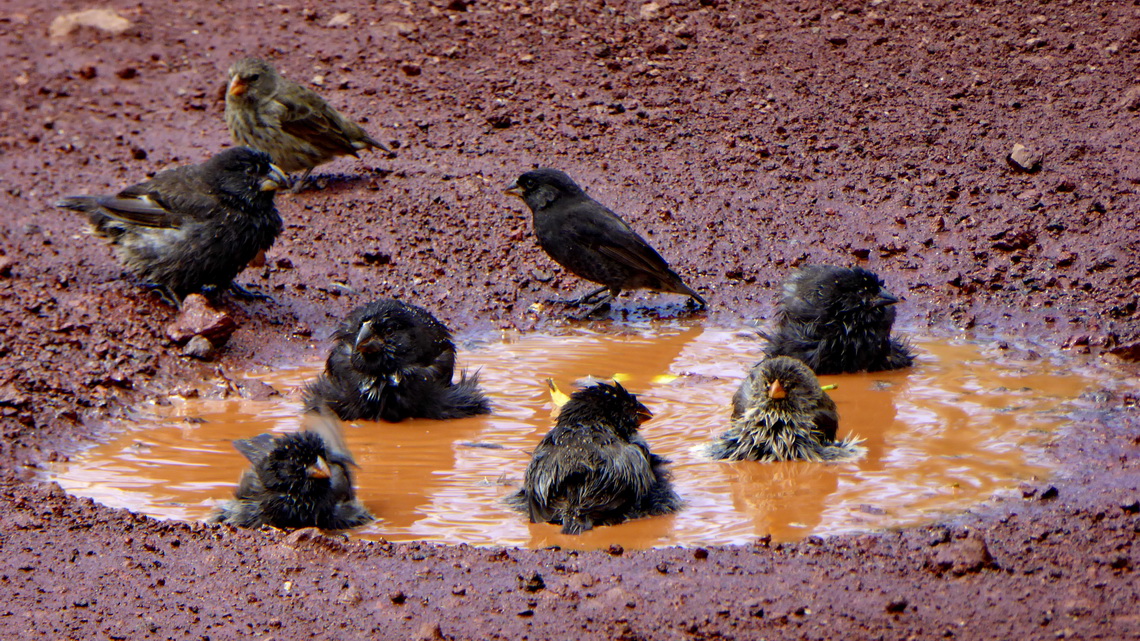 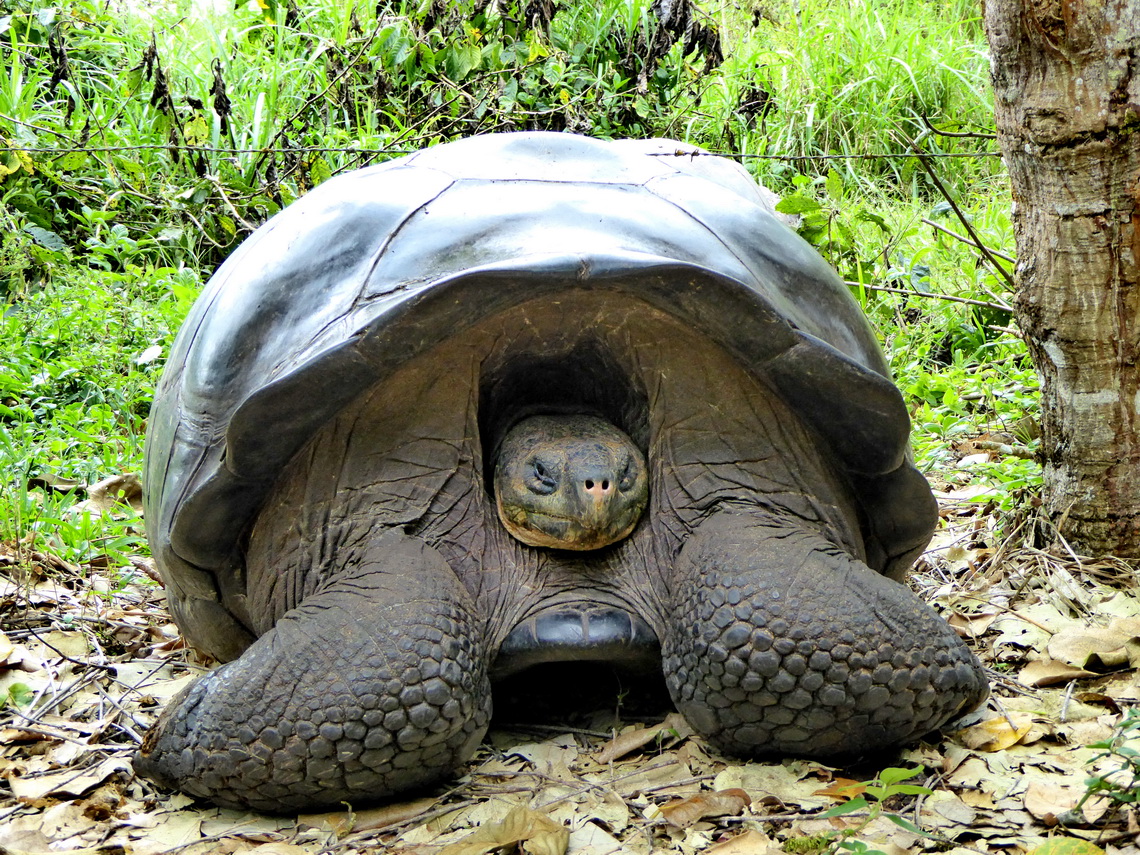 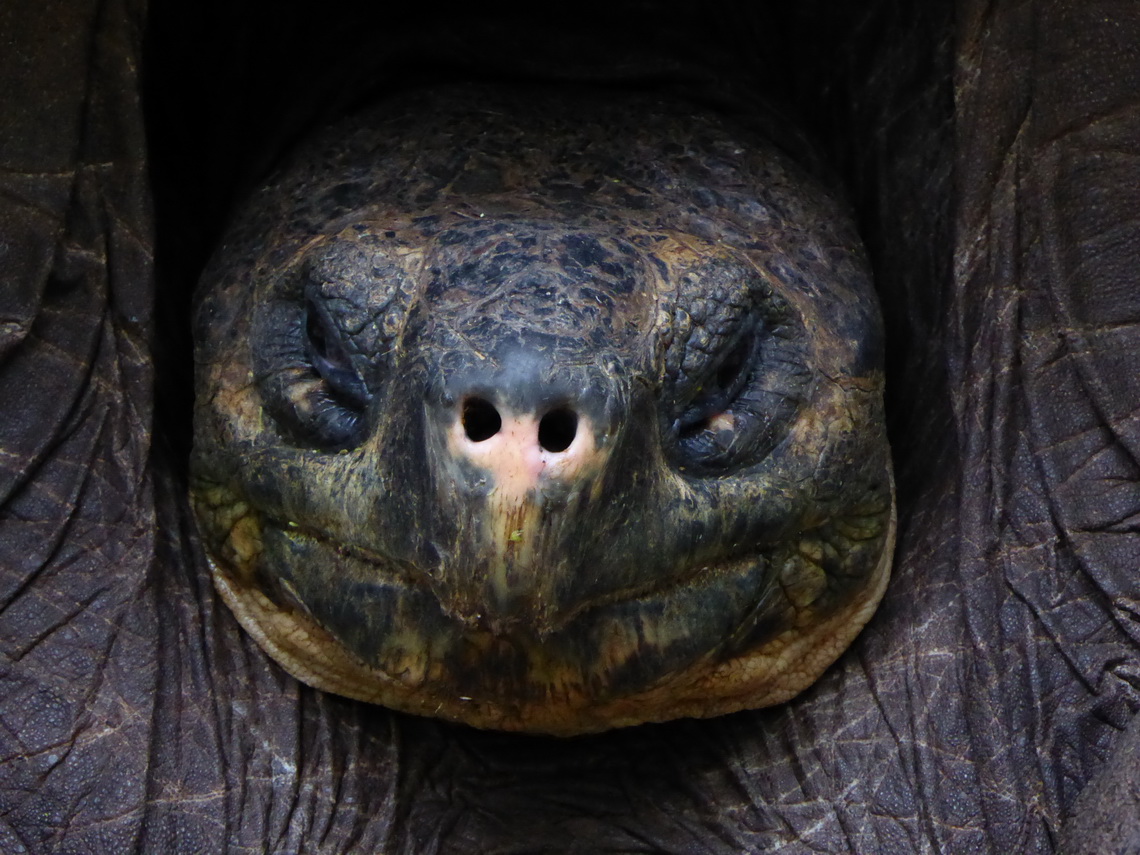 On this way are two lava tunnels which were both several hundred meters long. The first one had some light, but also a narrow gap of about half a meter height where we had to crawl. The latter one was totally dark. On our return to the main street we climbed up a vantage point with marvelous views to the ocean. 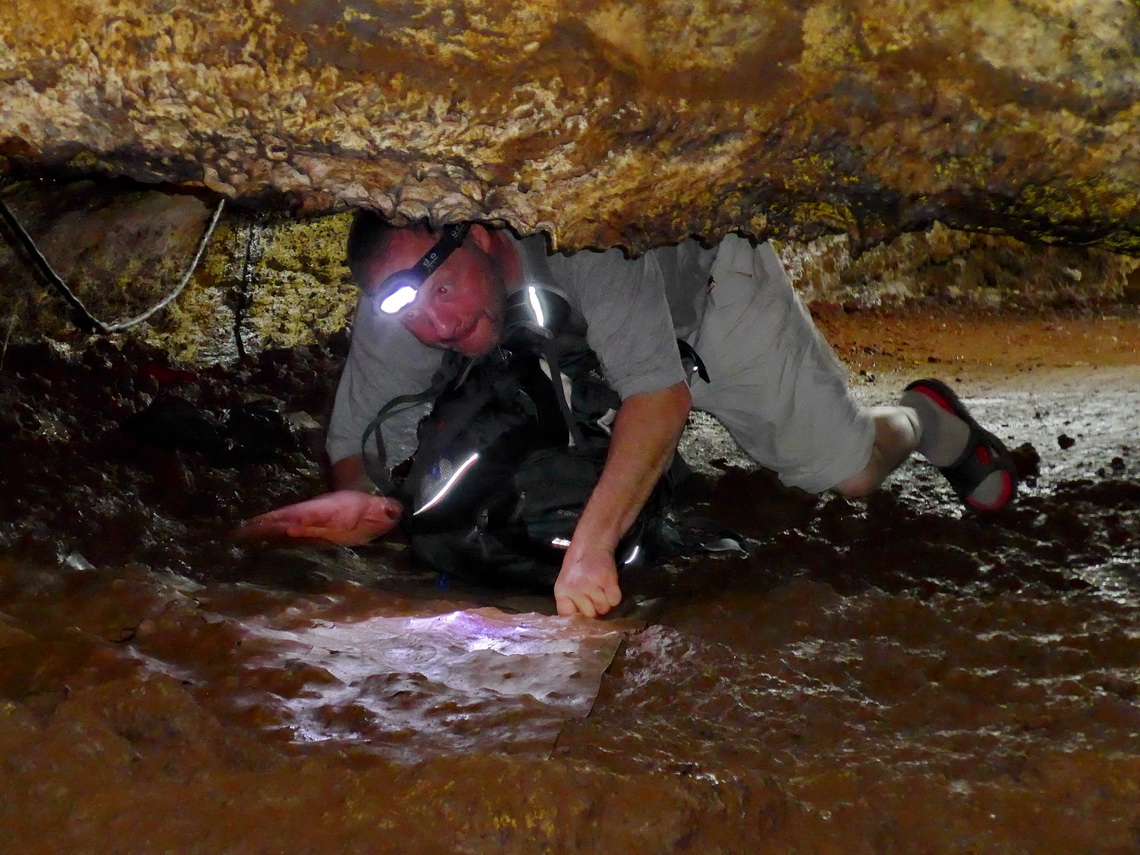 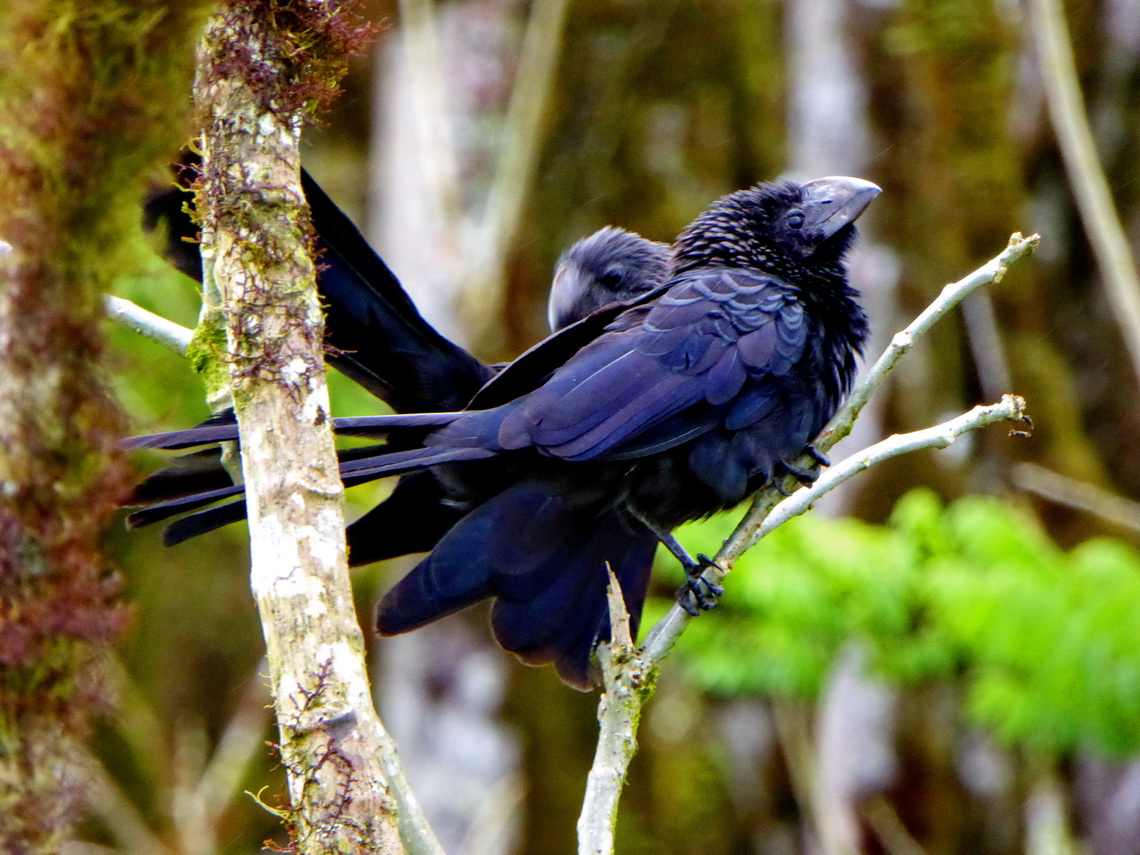 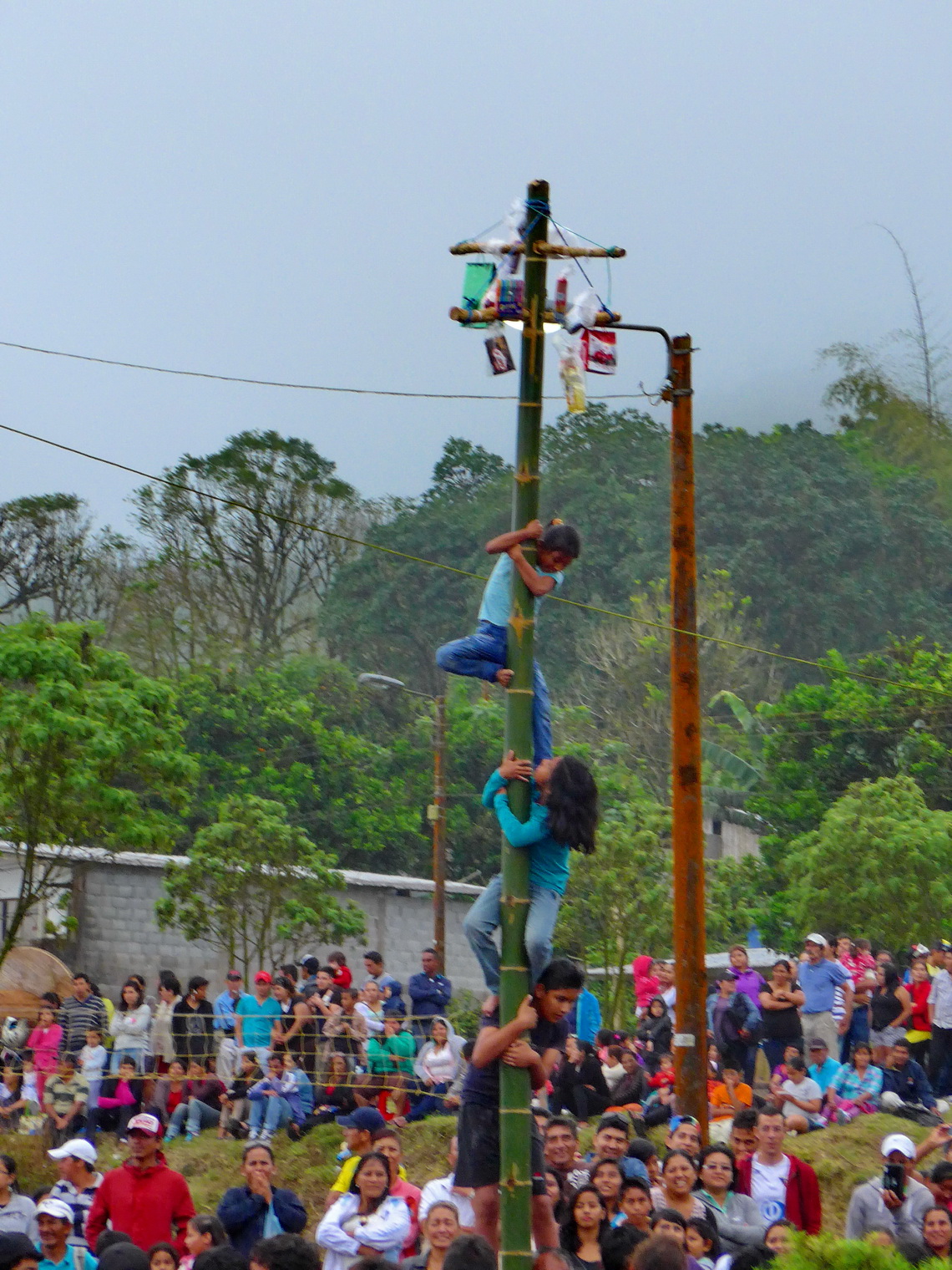 East of town is the Charles Darwin Research Station with some strange iguanas from other islands and a turtle breeding center where the collected eggs were secured and the baby tortoises fed till they are big enough to be released into the wilderness. 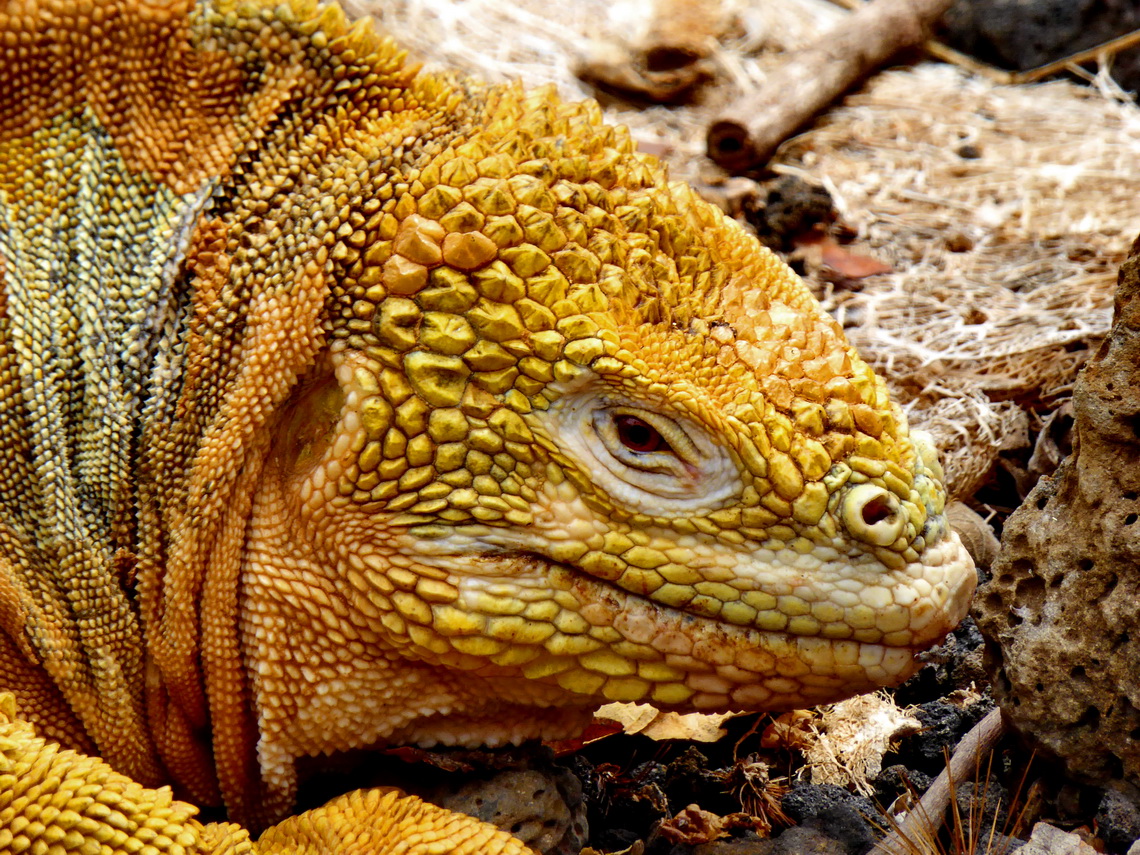 On the turtle beach - Playa Tortuga we saw our first sea-turtles and sharks when we were kayaking in calm waters. It is a 1 hour walk from Puerto Ayora on a cobbled path like the Chinese wall through the arid zone of Santa Cruz. In the evening we decided to book four days island hopping with Iguana Travel, see their webpage www.iguanatravelgalapagos.com. Its owner Paddy Intriago made us a reasonable price of 100U$ per person per day including everything. On the first day we were on a little boat with seven younger people from six different nations. Our first stop was a rock in the ocean close to the two little Daphne islands, which are some kilometers North of Santa Cruz. Fully equipped we jumped into the water and thanks to the agency and of a couple being with us we have pictures of the incredible world under water. 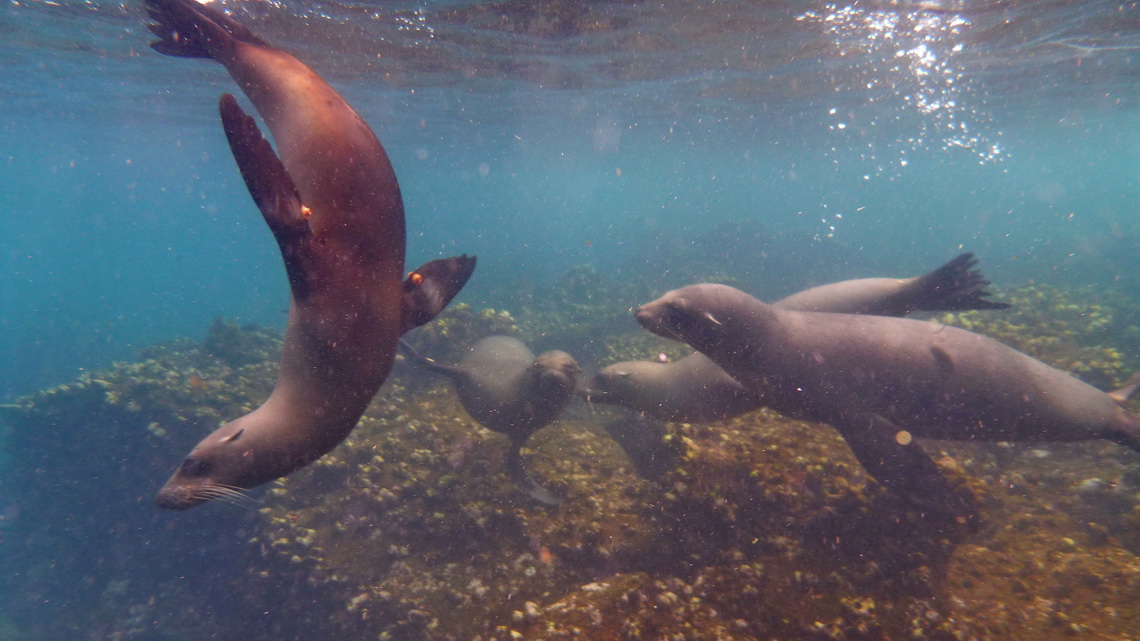 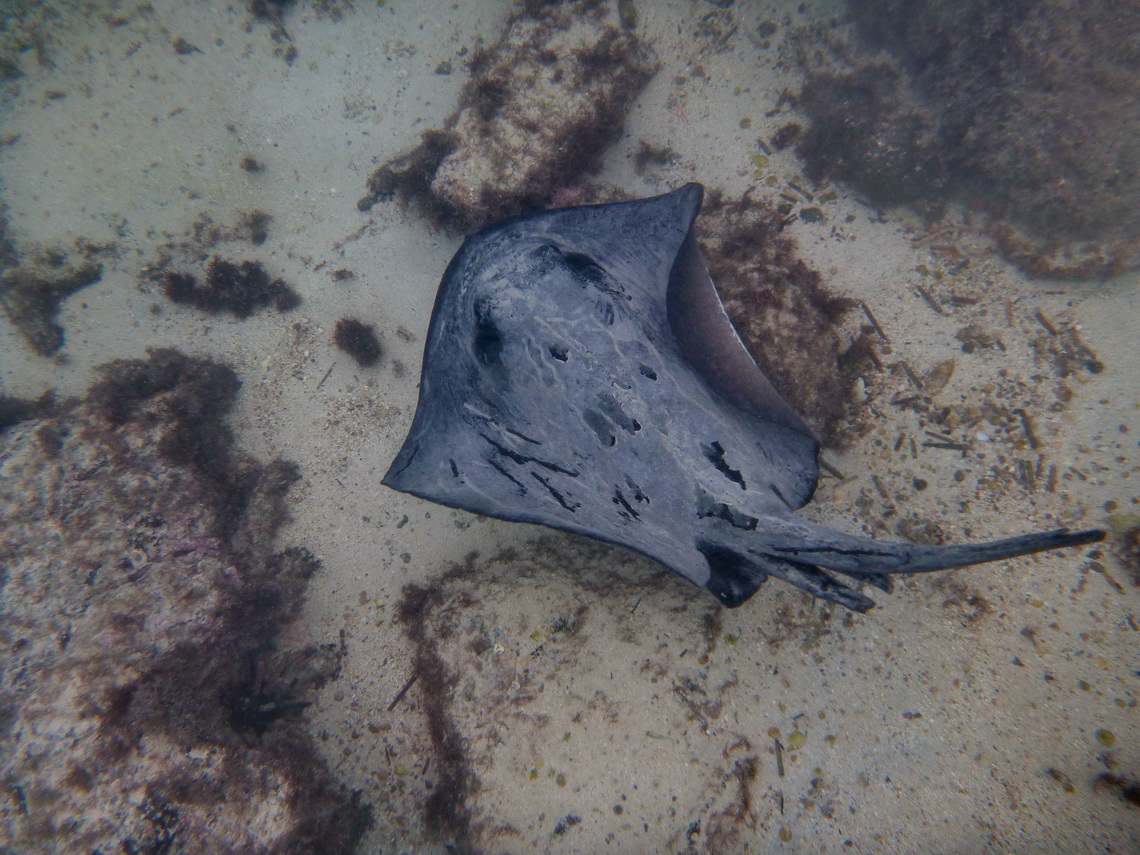 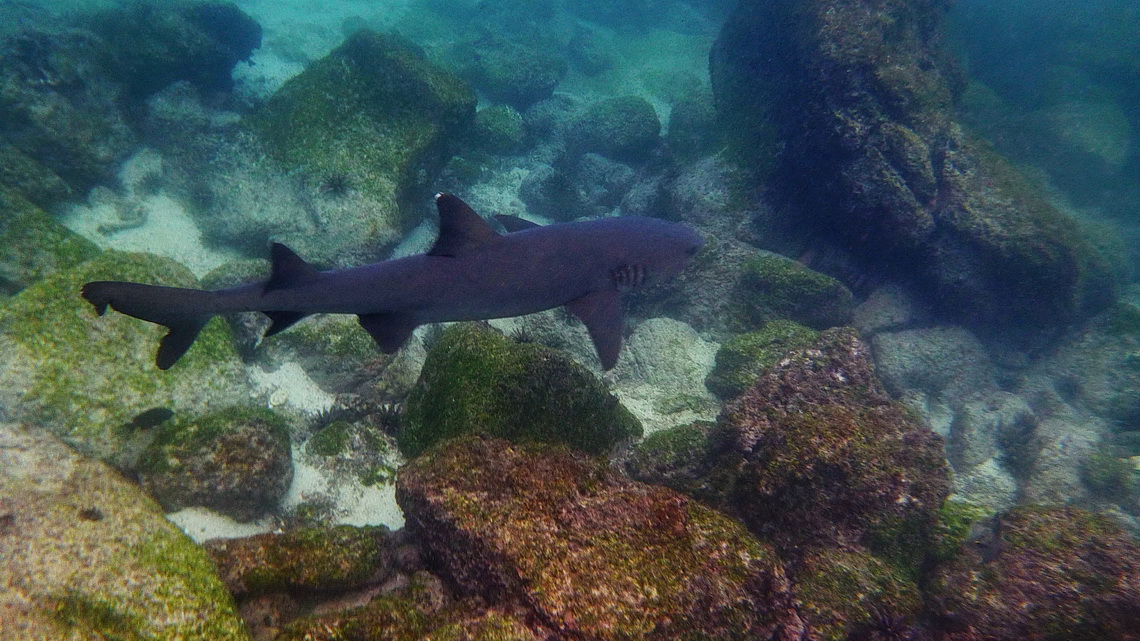 It was really a scary and weird feeling being with the sharks in the same water but our guide ensured us that the sharks of Galapagos are not dangerous. He was the first who were in the water and he searched for them. Another top was that he found some marvelous sea-horses. After a delicious lunch in front of Daphne Mayor we jumped into the ocean again. 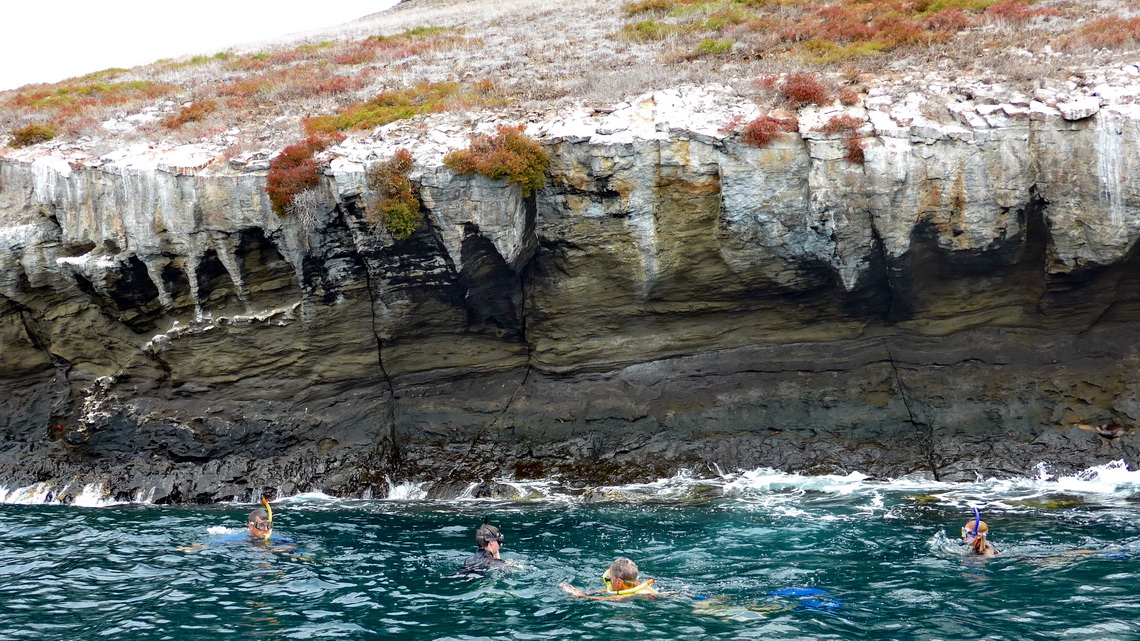 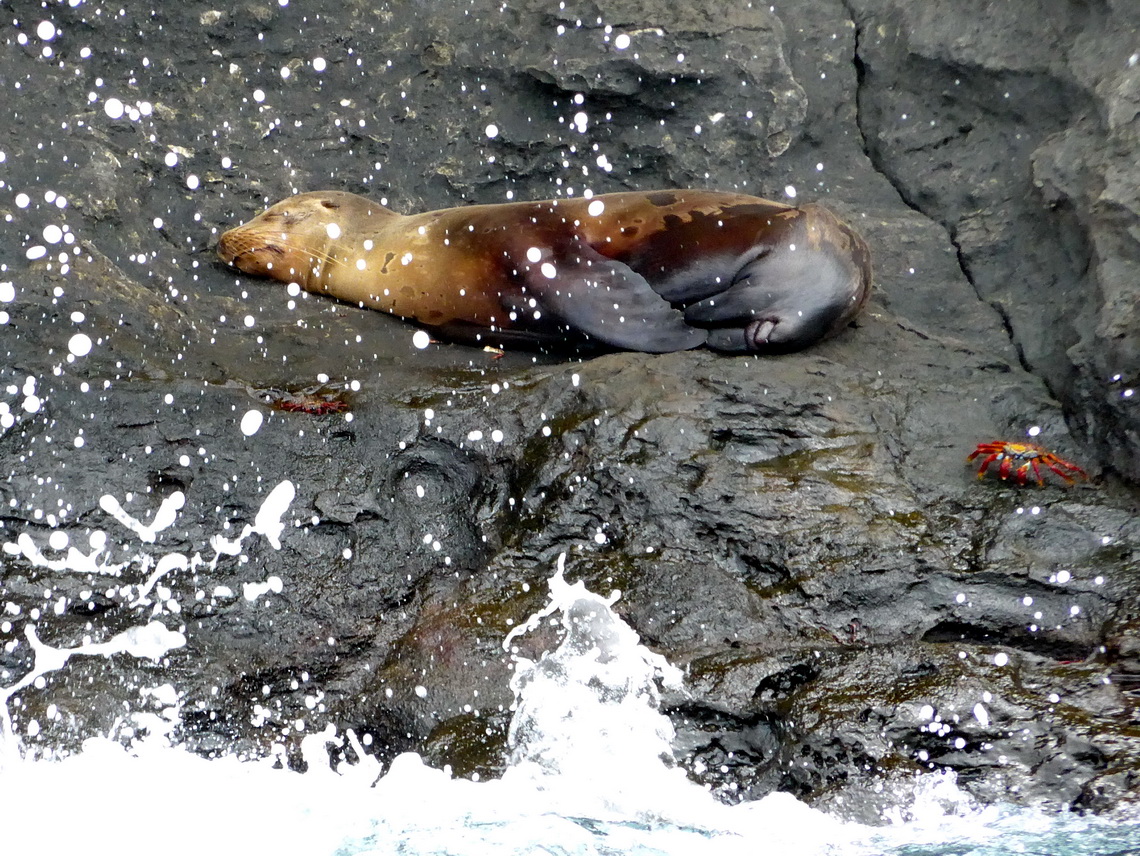 The last part of this extraordinary trip was visiting a remote and lonely beach on the northern side of Santa Cruz. But it was very busy, ... 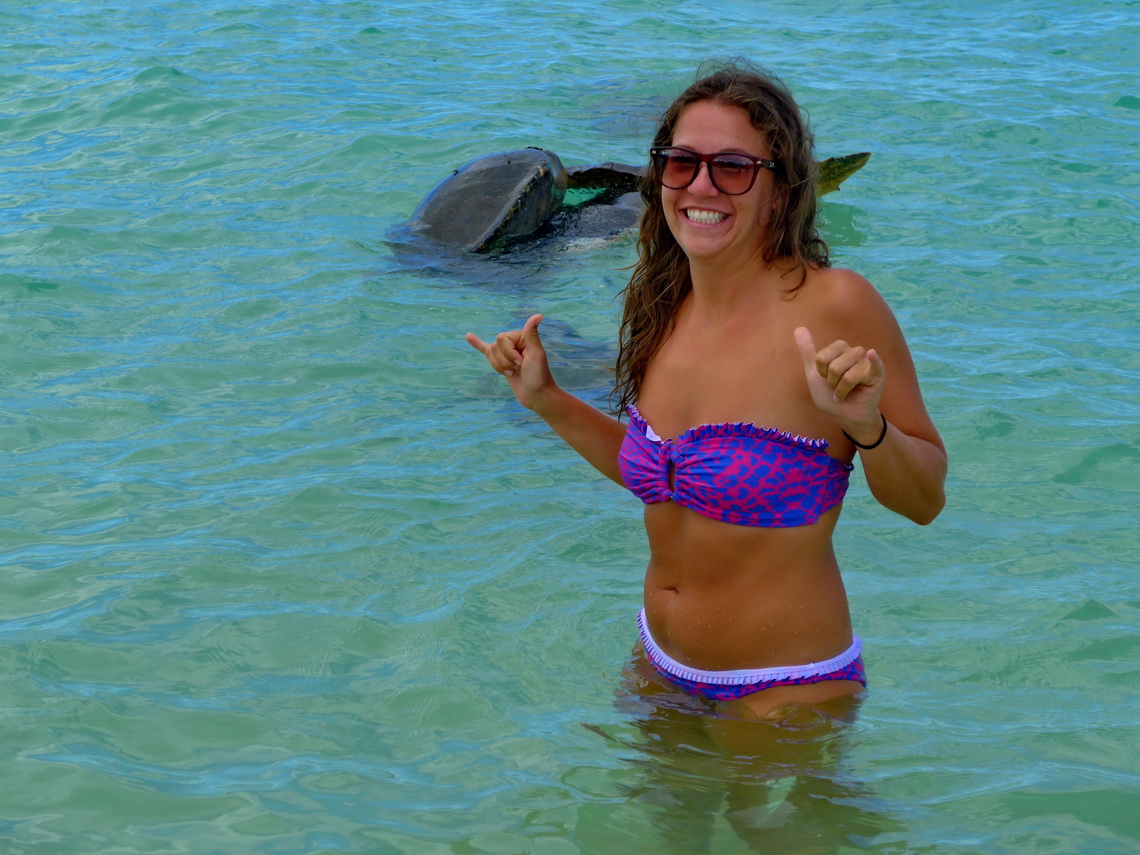 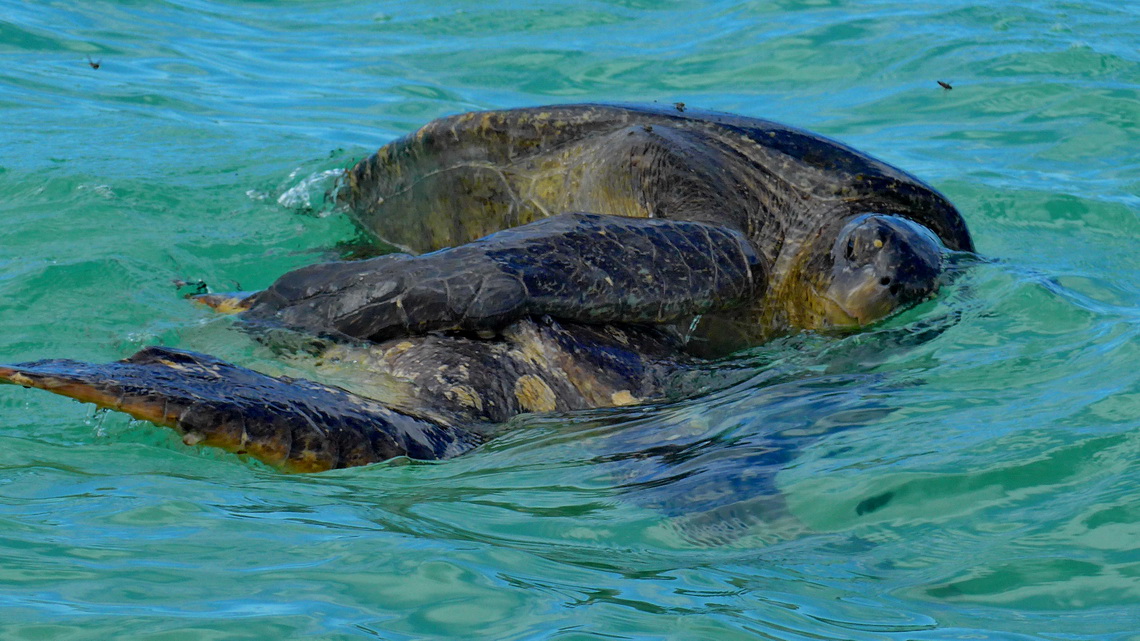 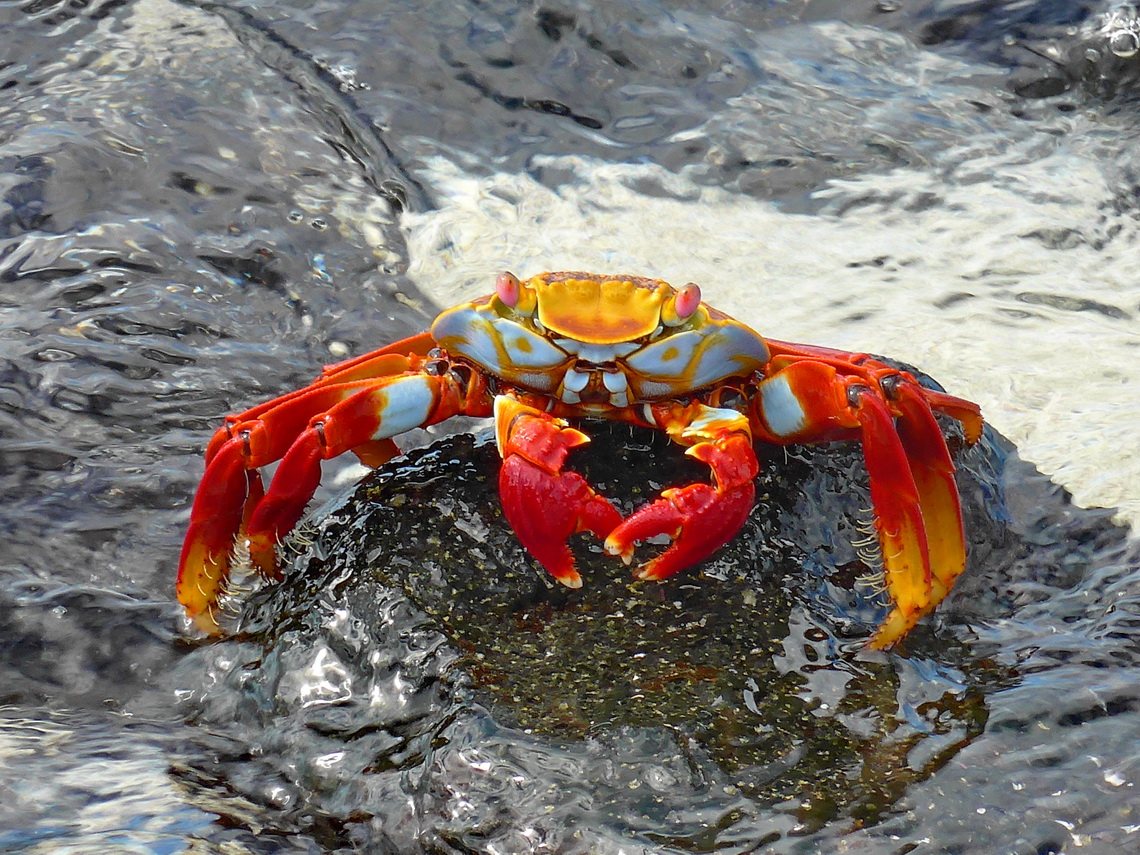 The 2 hours journey to the largest island Isla Isabela with a public speed boat on the next morning was very bumpy. Iguana Travel booked us a room in the excellent Hostal Tintorera in Puerto Villamil. After lunch we visited the lagoons close to the little town and did a superb kayaking in the channels around the little islands of its port. 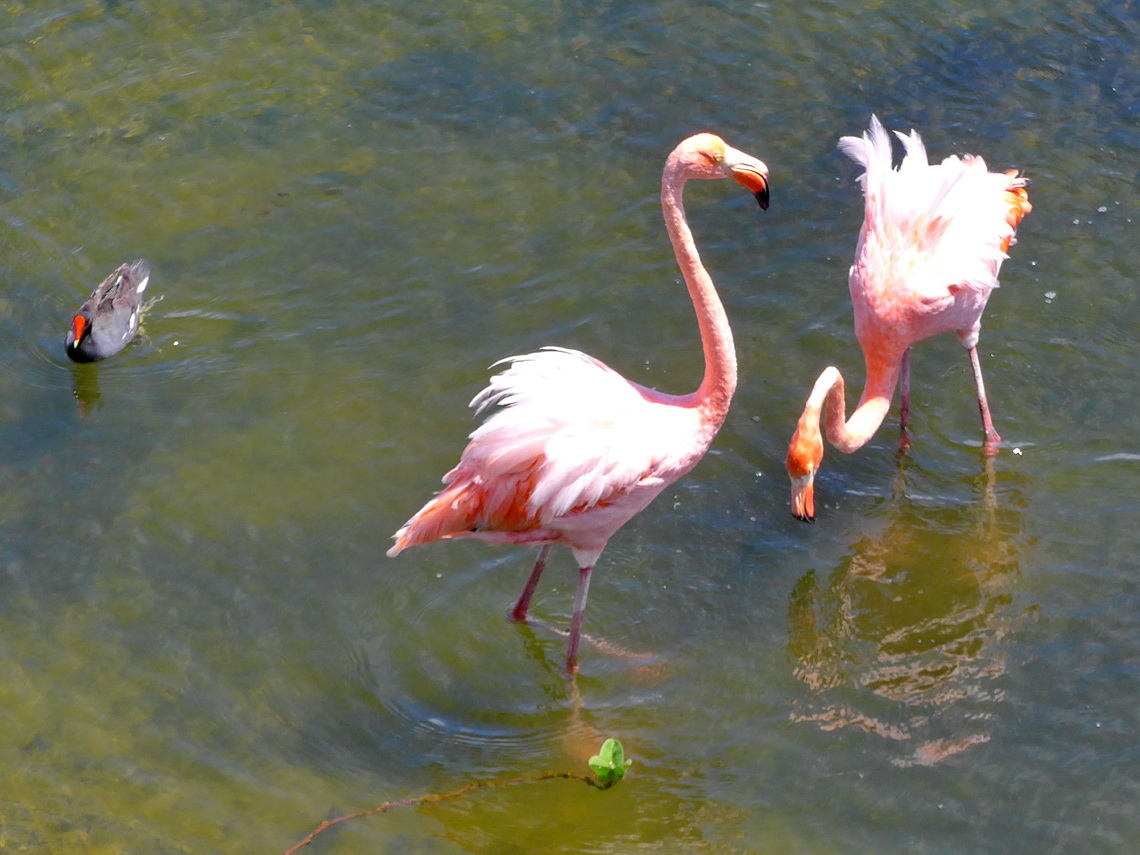 The next tour was to the crater of the Volcan Sierra Negra, which is with more than 10km diameter the second largest caldera on earth. A truck with seats drove us the trail close to the crater and to Volcan Chico. There we started hiking in the mist in a lush green vegetation with trees. Soon we came to Volcan Sierra Negra. The further we came North the environment became dryer and the sun was shining. Volcan Chico is a desert with any green or even plant but with an overwhelming volcanic landscape. 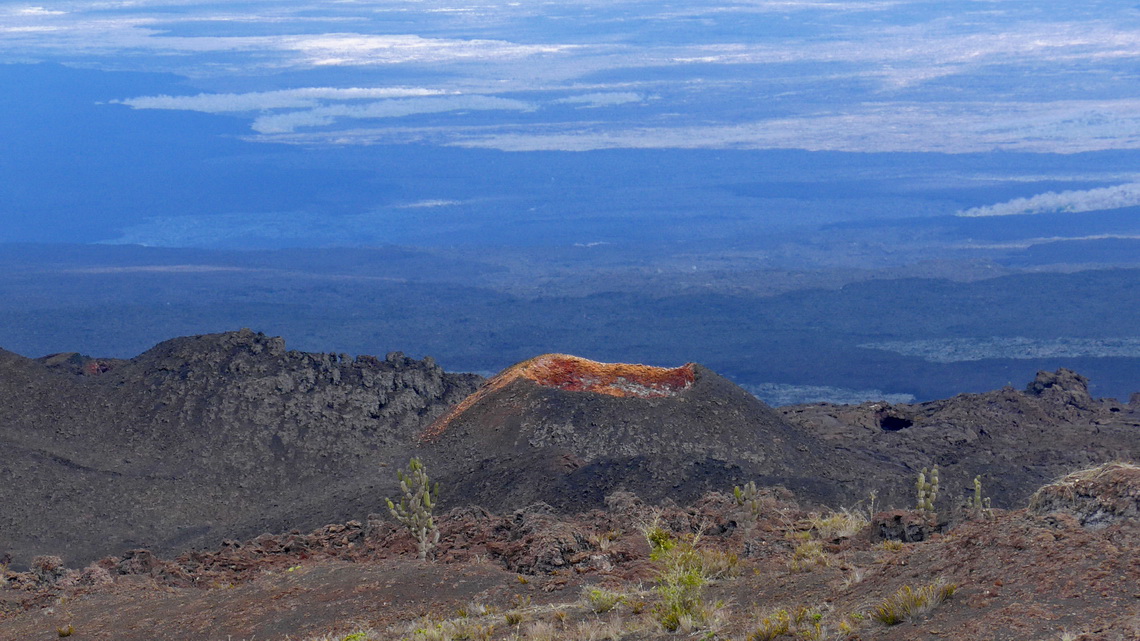 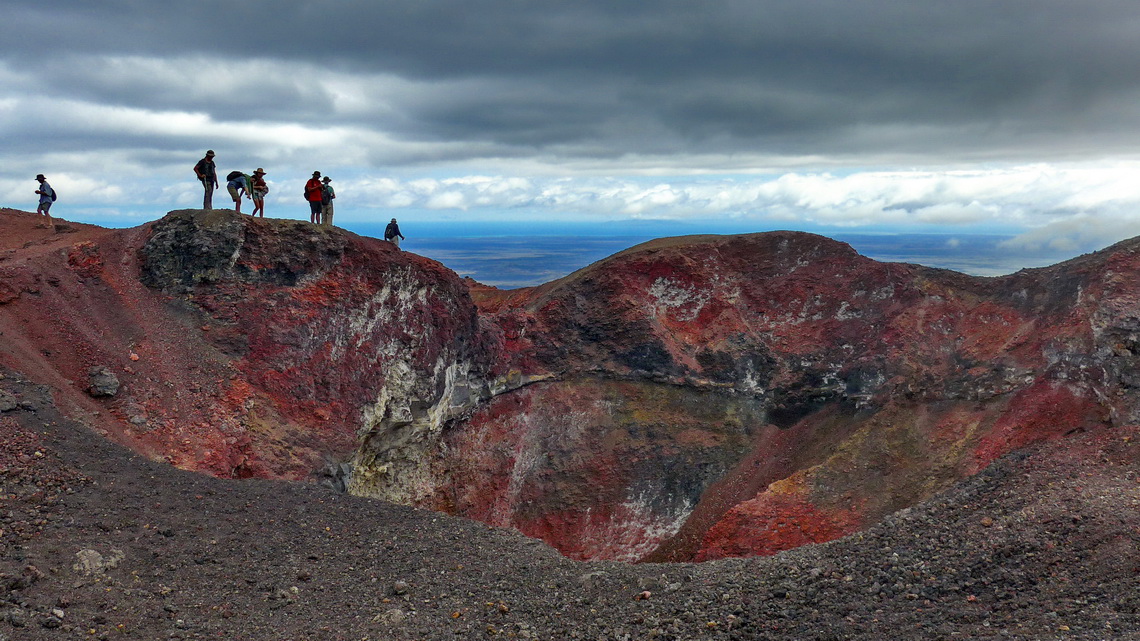 In the afternoon we walked without the group and guide half the way to the Muro de las Lagrimas - the wall of the tears. It had been erected from prisoners in the heat without any sense. After passing the more than 2km long beach west of Puerto Villamil we came to a rocky and rugged section with little lagoons, pristine beaches and extensive wildlife. 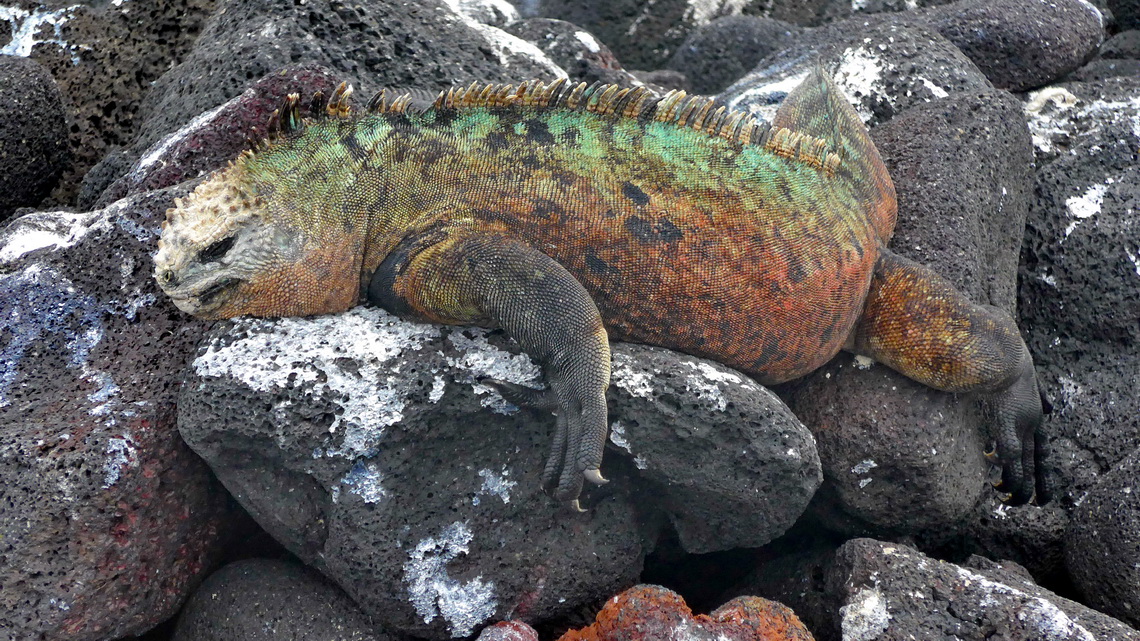 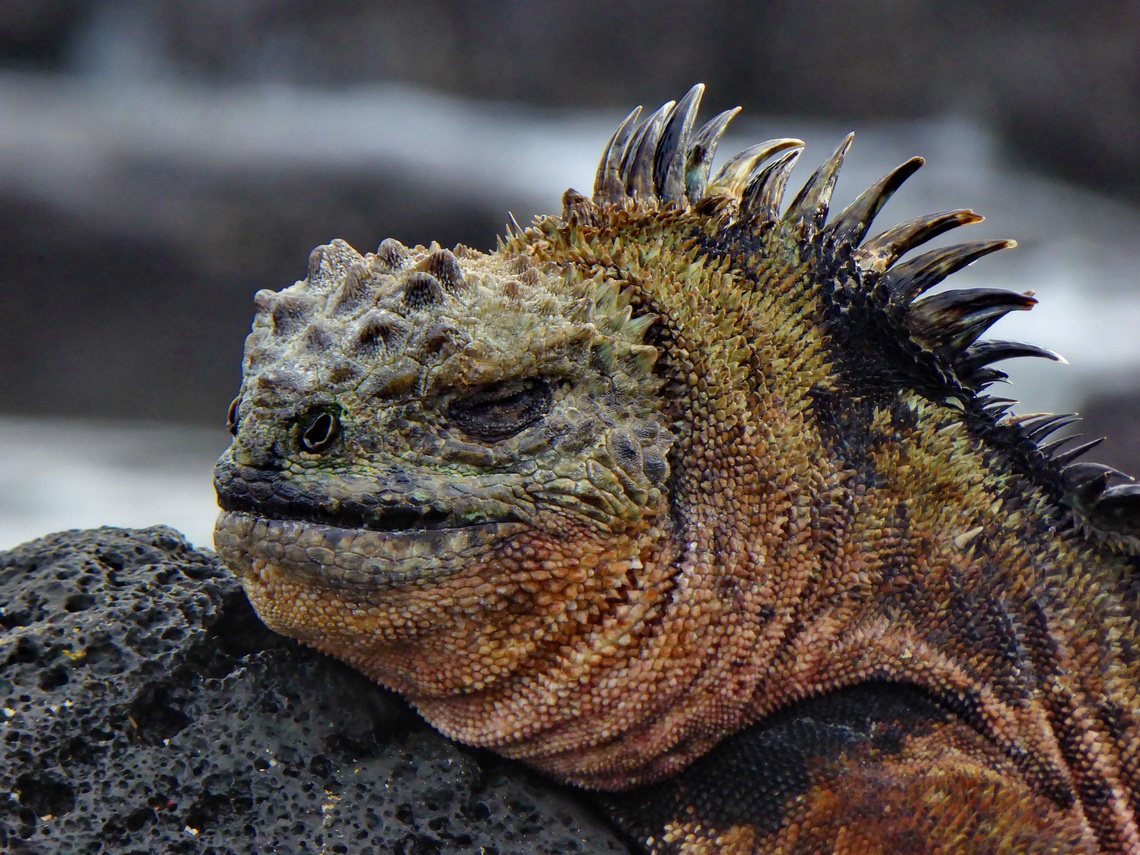 On the third and last day on Isla Isabal we cruised with a little boat along its southern coast to some lava tunnels. We jumped into the water and great views of marine life before we went ashore to watch birds. 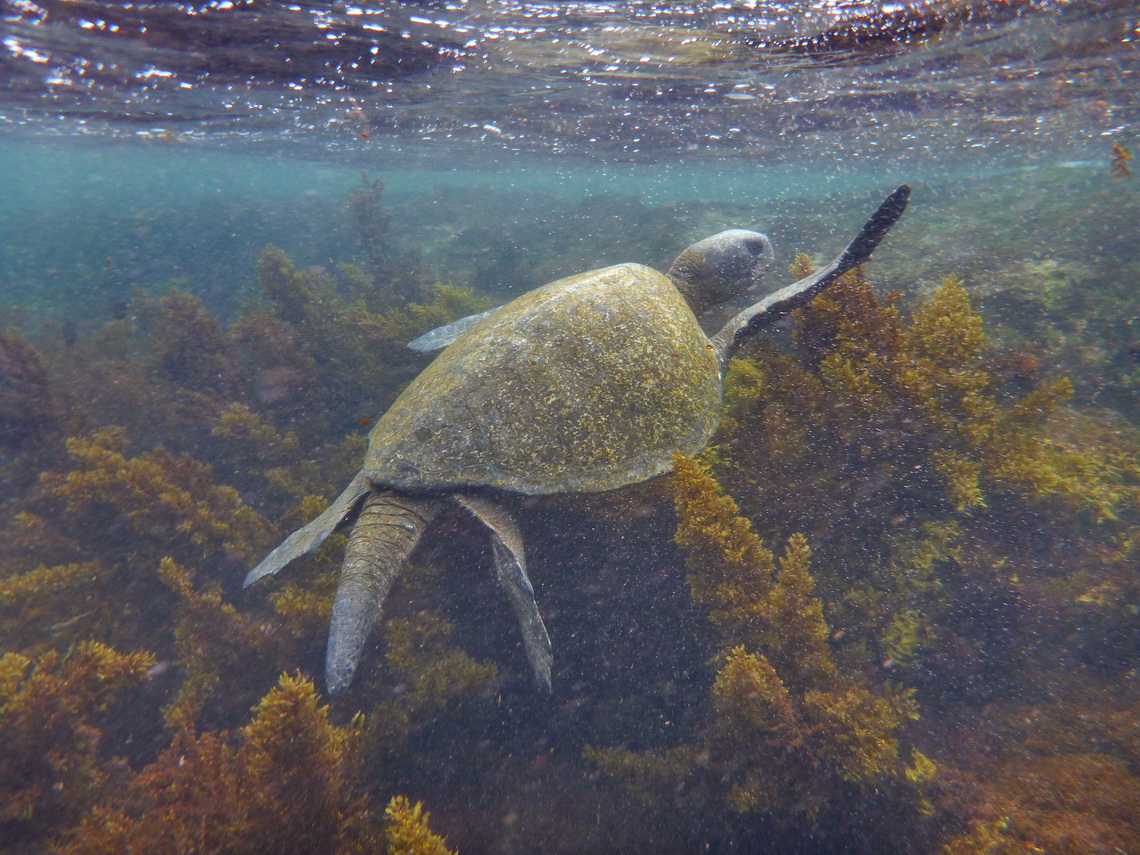 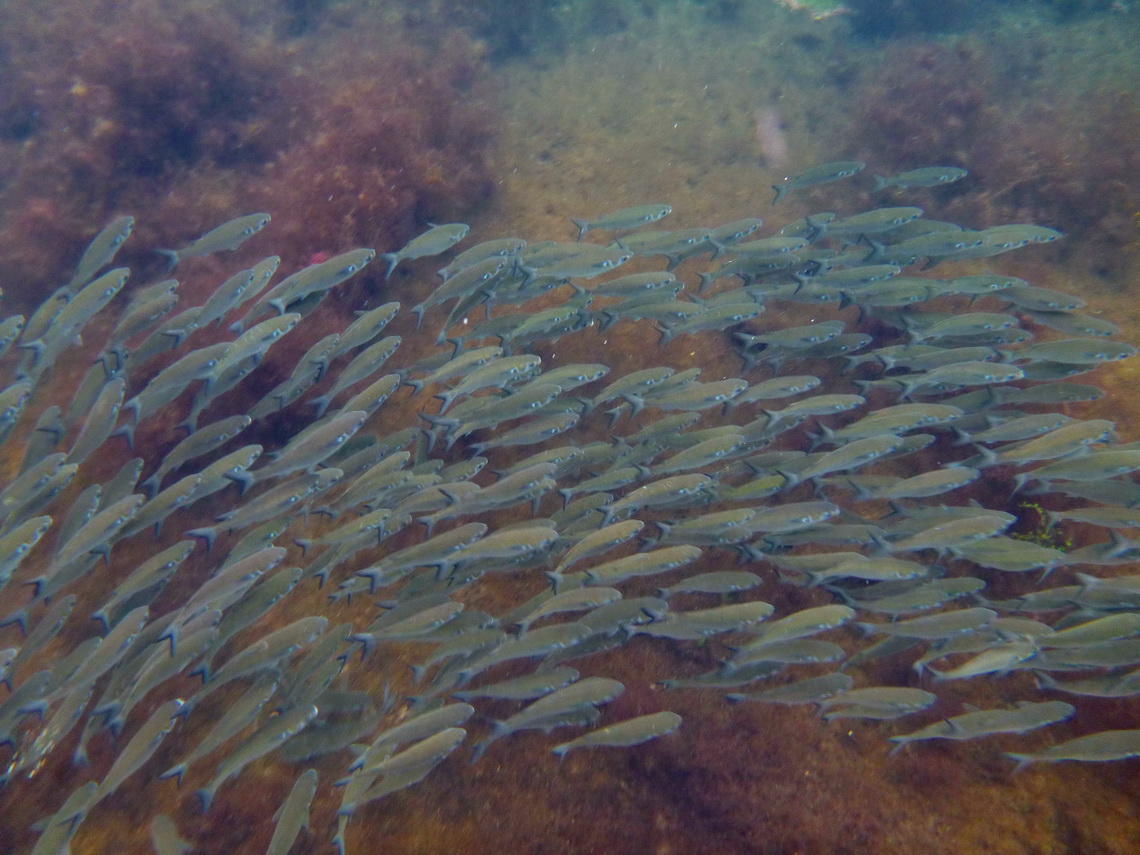 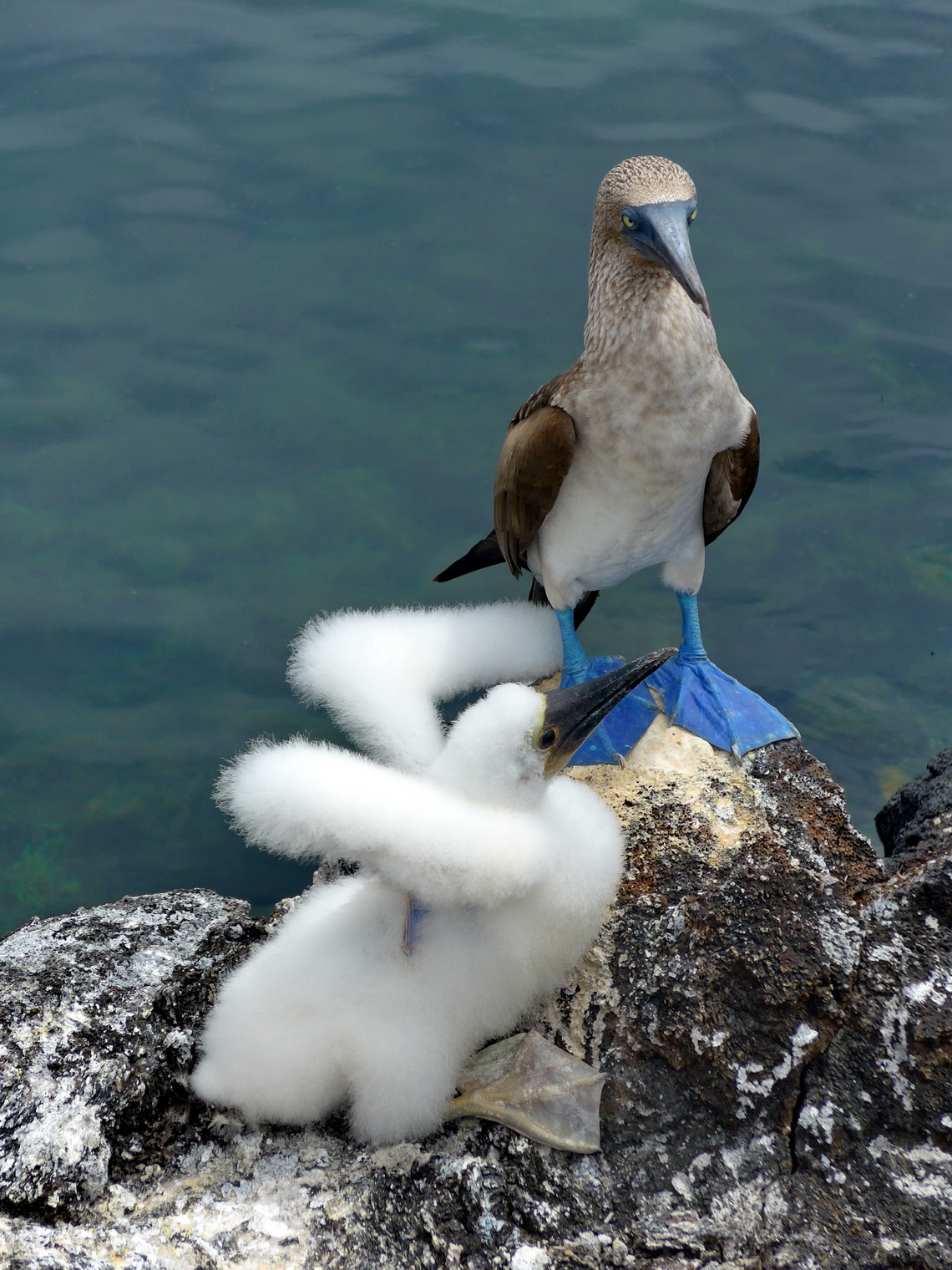 On the way back to Puerto Ayora we had the idea to sit in the back of the speed boat to avoid the bumps. But we were totally soaked by the sputtering water of the sea; it became cold and uncomfortable. The last day on Santa Cruz we took a taxi and spend some hours on the beach Playa Garrapatero. 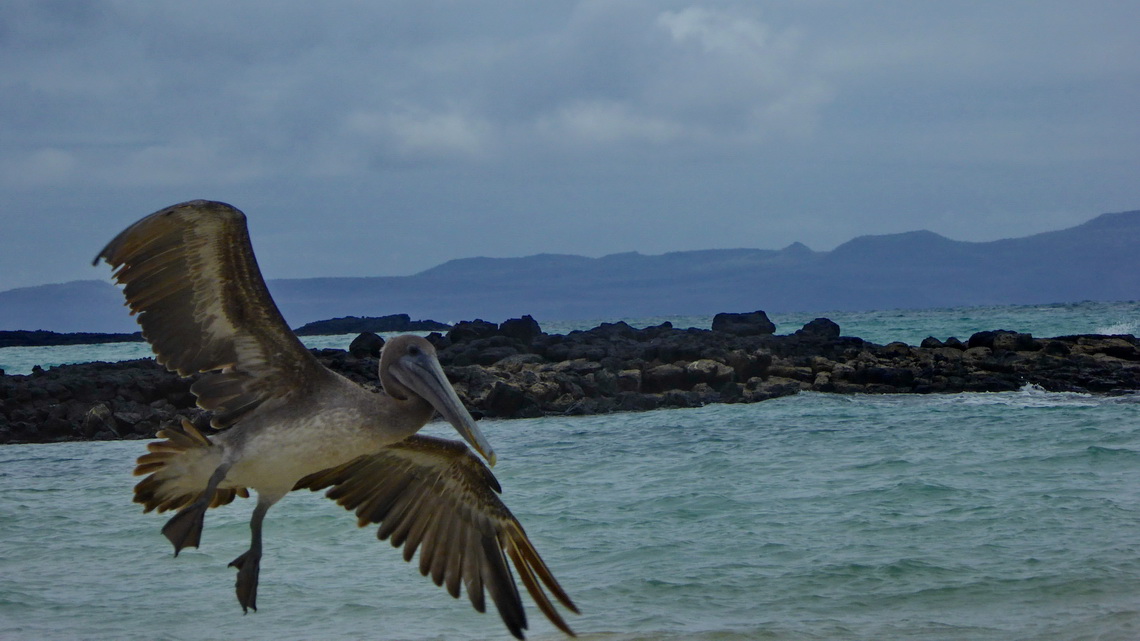 Early next morning we entered a speed boat again to head to the island San Cristobal, which is the most eastern one of Galapagos. Its main settlement Puerto Baquerizo Moreno is the capital of the province Galapagos. It is a pleasant small town with far less tourism than Puerto Aroya and consequently less expensive. It has the second main airport of Galapagos and we took from here our plane back to Quito after we had spent two days on San Cristobal.

There are excellent hiking capabilities. North of town is the beautiful hike Las Tijeretas where we could see frigate birds in the steep and rocky wall. The path continues to the remote beach Playa Baquerizo. South of town is the La Loberia where the sea lions breed their offspring. Further south it becomes rocky with many birds like blue-footed boobies. Both trails are included in the GPS coordinates file of Ecuador. 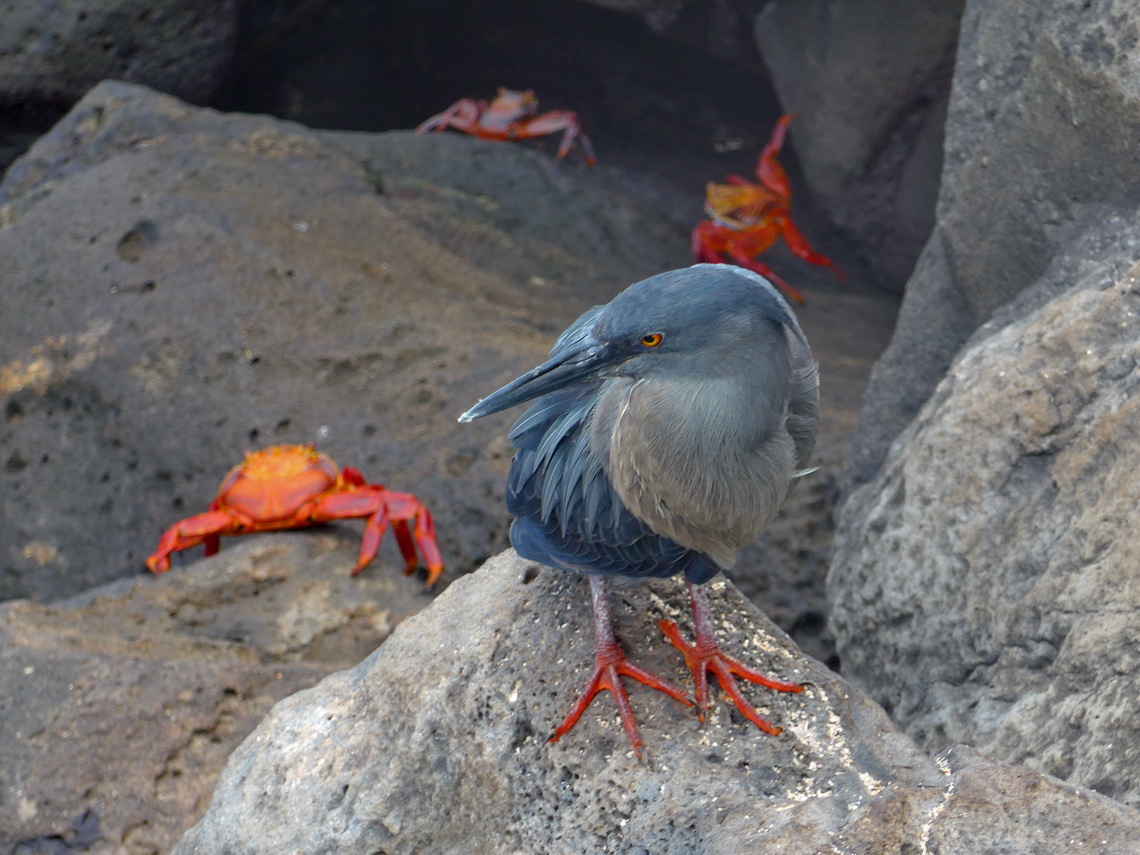 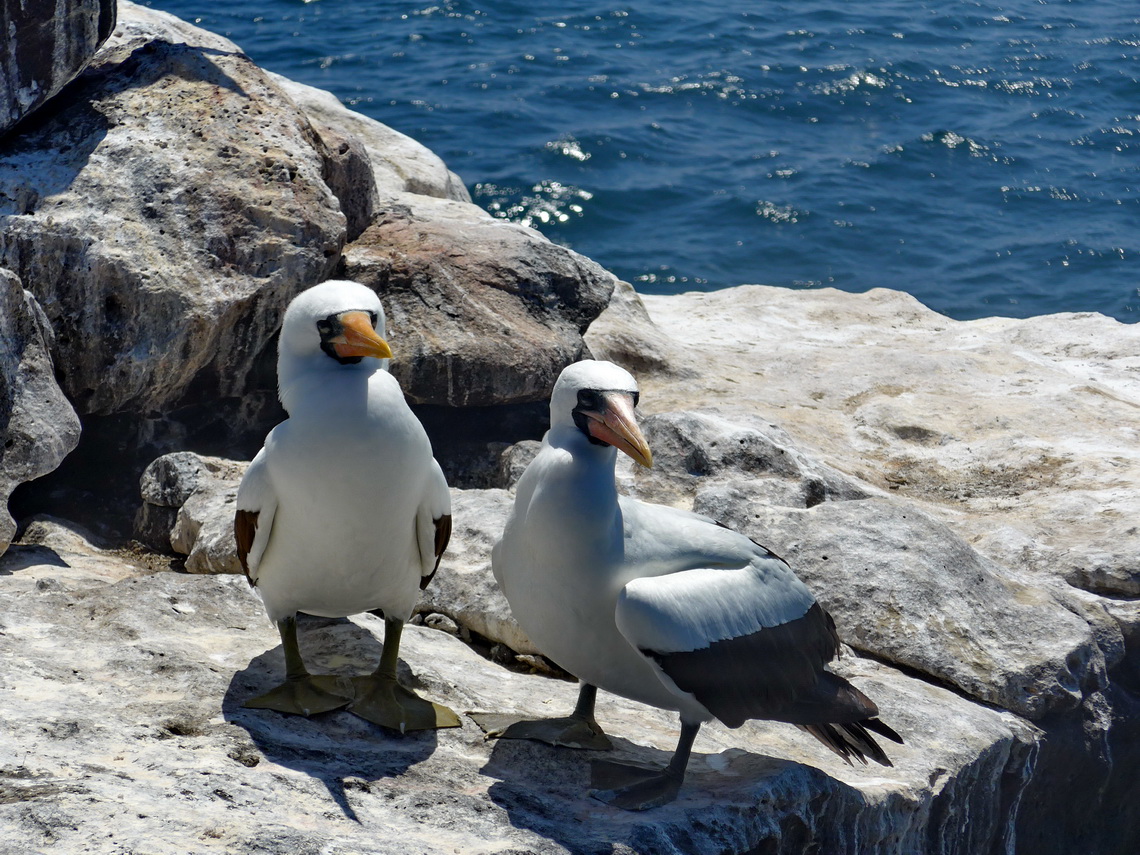 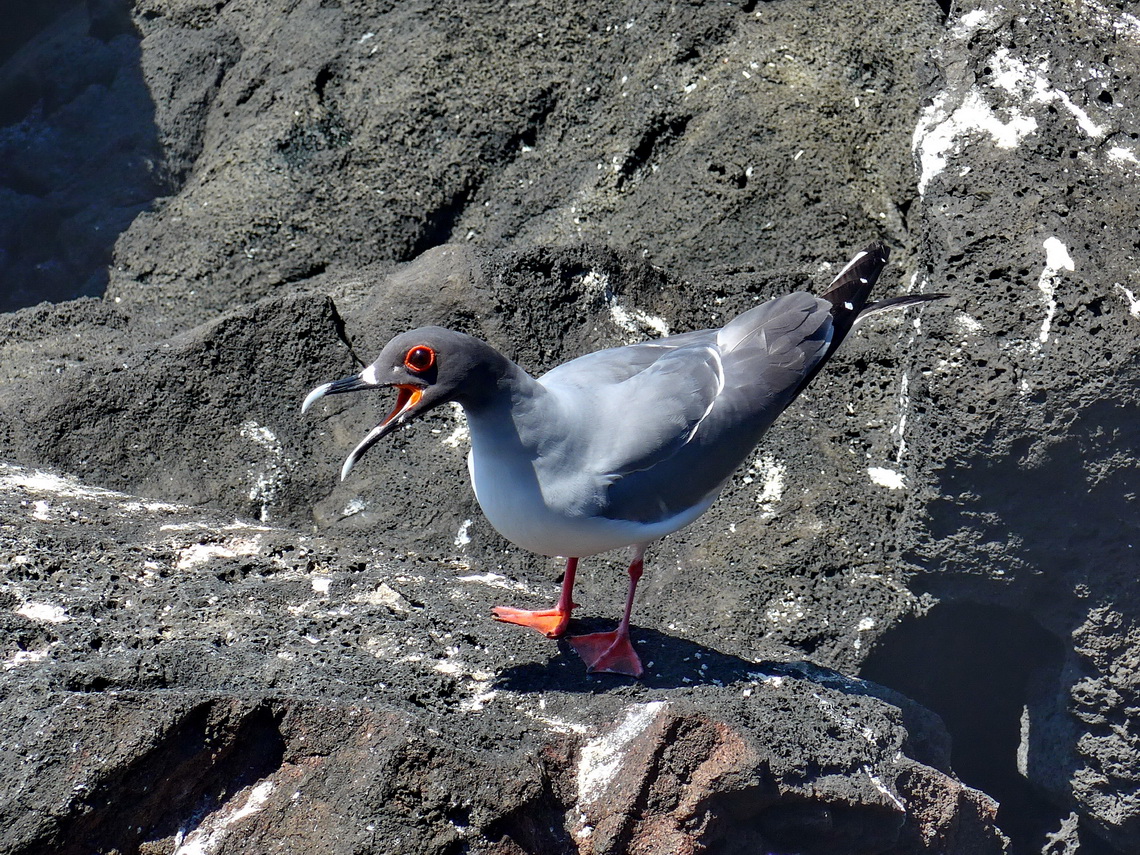