The Sierra Nevada de Cocuy is one of the most spectacular ranges of the Andes with 15 peaks higher than 5000 meters sea-level. Green lush valleys lead to huge glaciers, stunning pinnacles and marvelous lakes. It is located approximately 300 kilometers northeast of Bogotá in the eastern range of the Colombian Andes, the Cordillera Oriental. Besides bumpy dirt roads access to the this paradise is relatively easy, also to some of its summits and glaciers. Many Colombian people come to these mountains to see and feel snow once in their life. 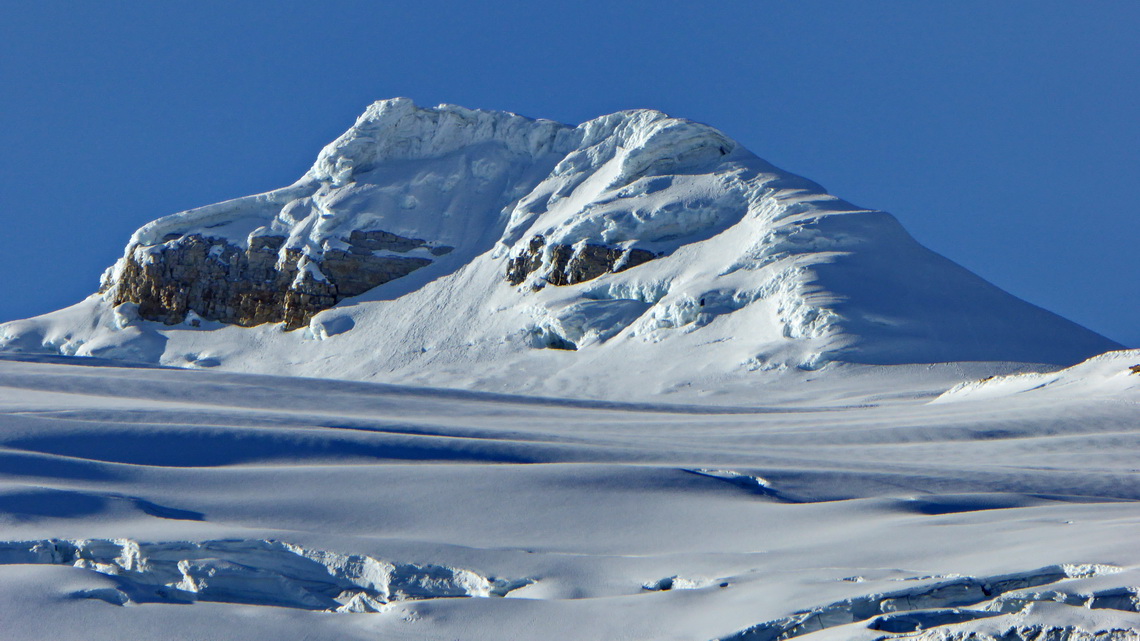 The street from Bogotá to Capitanejo via Tunja and Duitama is excellent, most parts with 4 lanes like a highway. Capitanejo is in the deep valley on the western limit of the Sierra Nevada del Cocuy. A bad road with many deep potholes and sometimes scree leads approximately 80 kilometers to the main village El Cocuy, just the last few kilometers are paved. With our car we needed nearly 6 hours for these 80 kilometers!

But we came just in time to organize 4-wheel taxis. Our idea was to visit first four days the southern part of the Sierra Nevada del Cocuy to see its landmark Púlpito del Diablo (pulpit of the devil) and to climb up Pan de Azucar. Another taxis we fixed for the transfer to the northern part with its highest summit, Ritacuba Blanco (5330 meters sea-level) and three days later back to El Cocuy. Sierra Nevada del Cocuy is a Colombian National Park and you have to pay an entrance fee and to state all your activities But you cannot pay the fee without an rescue insurance, which is everything but cheap. Fortunately they accepted our membership of the German Alpine Club and we were allowed to spare the mandatory lecture how to behave in higher mountains!

We found a reasonable campsite including shower and parking lot next to the Terpel gas station (GPS coordinates: N6° 24.614' W72° 26.769'). At 6:00 AM on the next morning our taxi came and drove us the 3900 meters high farm Finca Alejandro Herrera (GPS coordinates: N6° 23.373' W72° 21.191'), which has a nice campground. People there are very friendly and helpful. We built up our tents and took our mountain gear to store it at the high camp of Pan de Azucar. Mules and horses are allowed only in emergency cases in the national park to minimize their negative impact to nature. Thus everybody must carry all his equipment by himself in case he doesn't want to hire expensive porters. On the narrow but beautiful northern way we hiked 4 hours to the high camp with heavy backpacks. 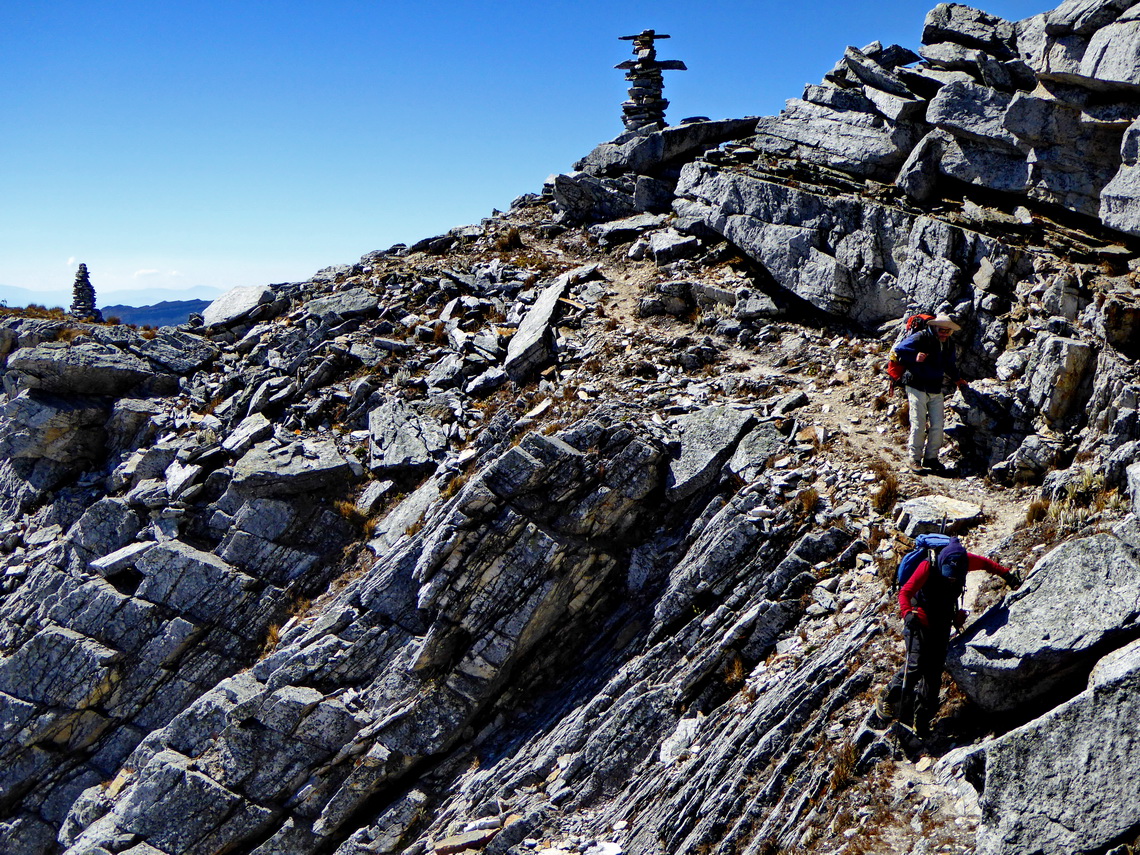 Many people took the broader southern way, which we headed back to our tents, now with light backpacks. Next morning we returned this way to the 4559 meters sea-level high camp (GPS coordinates: N6° 22.338' W72° 19.021') with our tent and all the stuff we had on the Hacienda Alejandro Herrera. 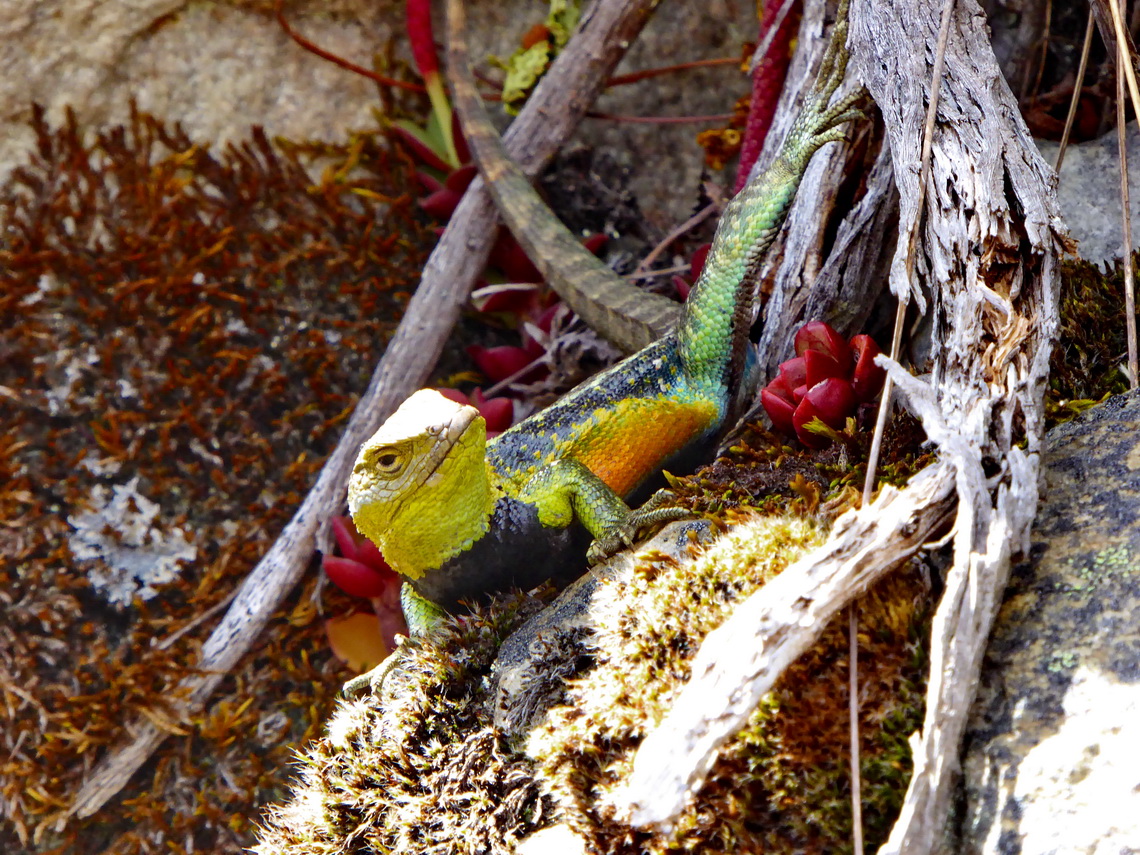 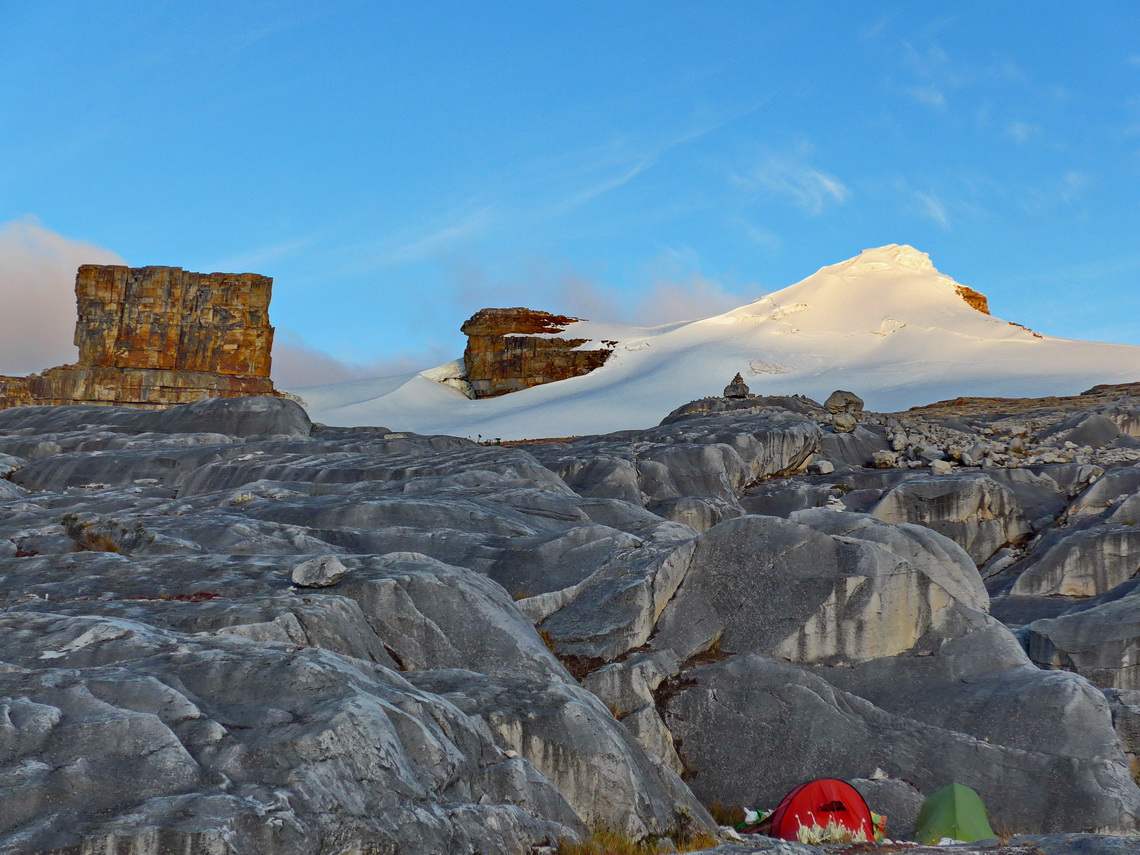 At 4:30 AM Tommy and Alfred started the ascent to Pan de Azucar. Full glacier equipment like crampons and rope is mandatory to access the glacier with its deep crevasses. Some were hidden by snow. The steep and sometimes very narrow snowy ridge to the summit was adorned with huge corniche. A false step there or a broken corniche could be fatal for both. After four hours we were happy to reach the 5130 meters high top of Pan de Azucar (GPS coordinates: N6° 22.259' W72° 17.957') and we were overwhelmed by the beautific views. 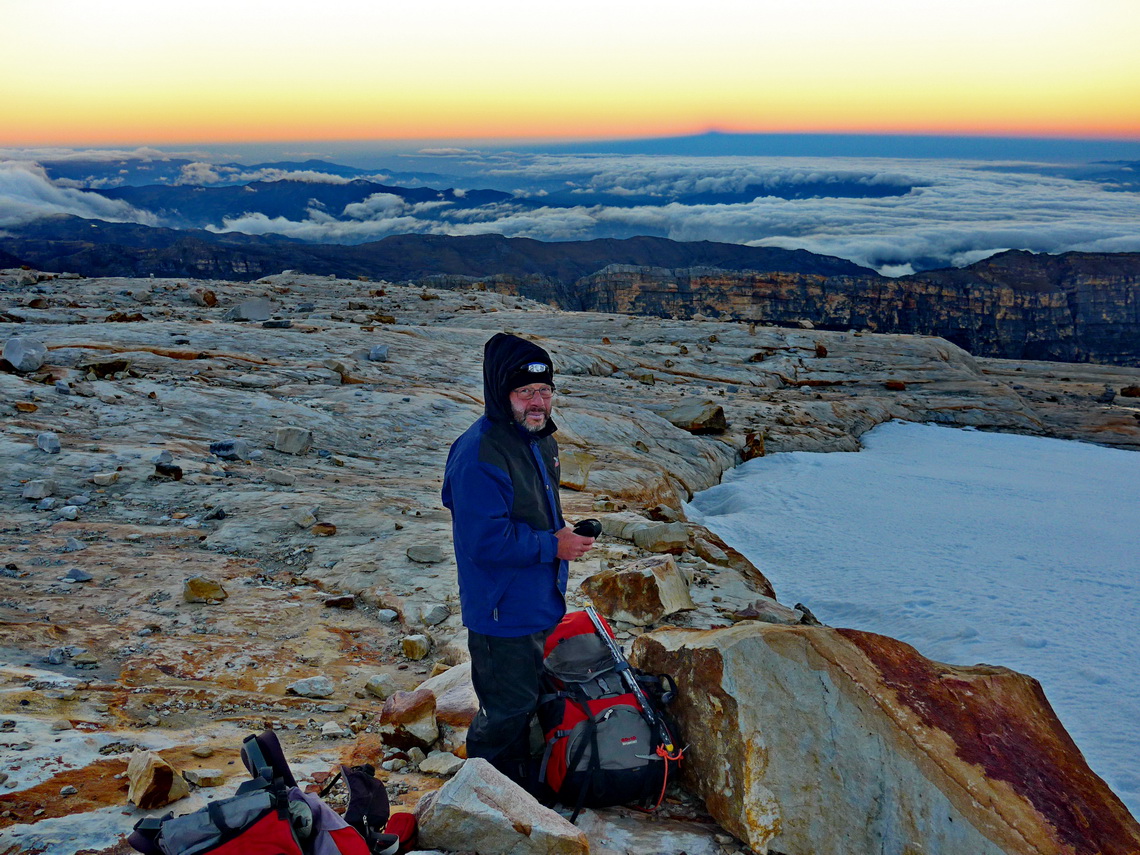 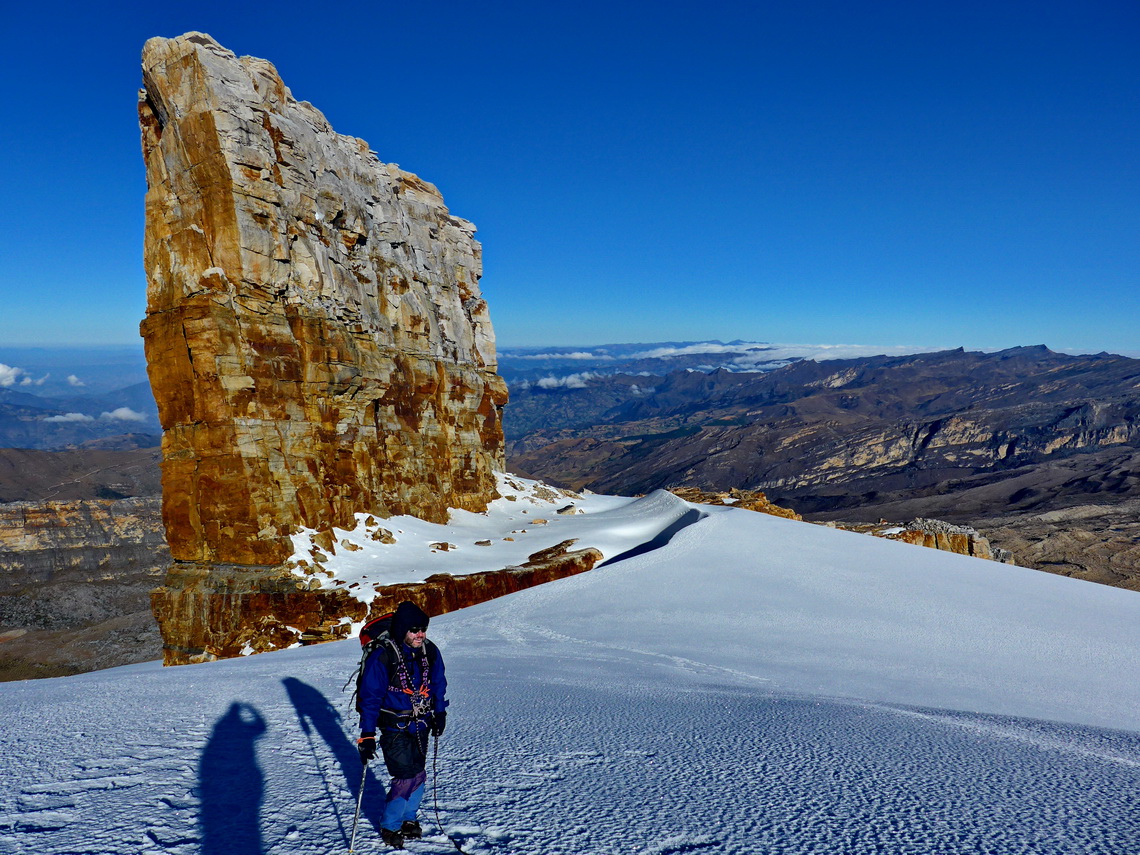 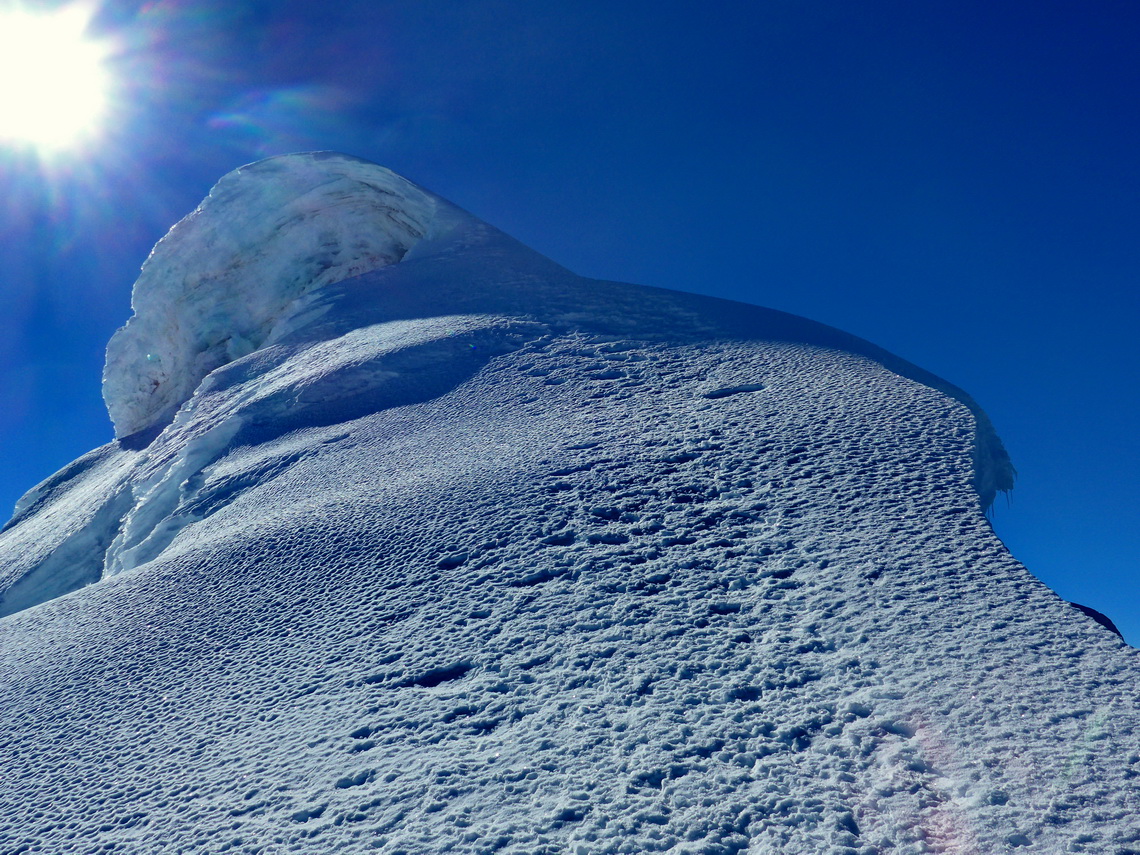 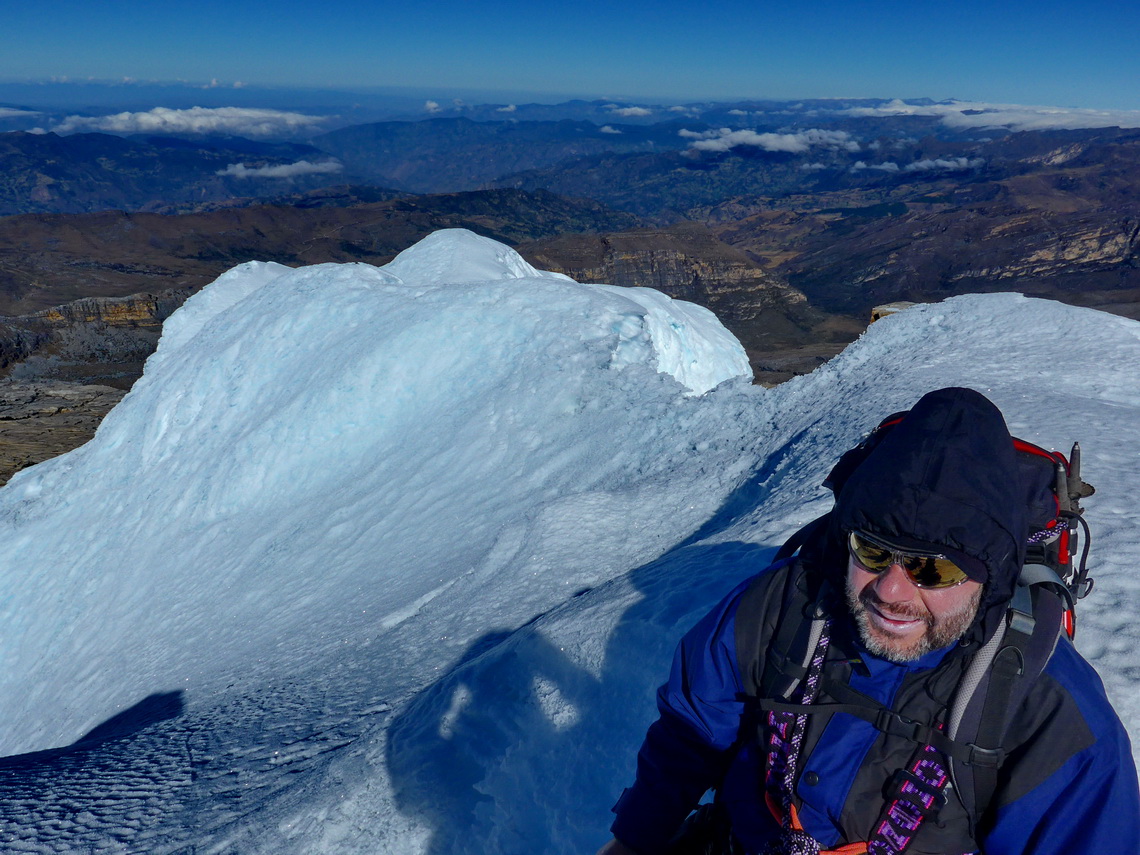 From Paso del Conejo a narrow path leads northwards through a gorge. Sometimes easy scrambling was required, which was a little hard for us with our big backpacks. After we left the gorge it became foggy and there was no path at all but many cairns which pointed into different directions. Thanks to the excellent hiking map on our GPS we were able to navigate correctly and arrive at Laguna Grande de la Sierra just before it became dark. We had downloaded this map from http://openmtbmap.org/, most of the trails like the ways to the summits of Pan de Azucar and other mountains are included. 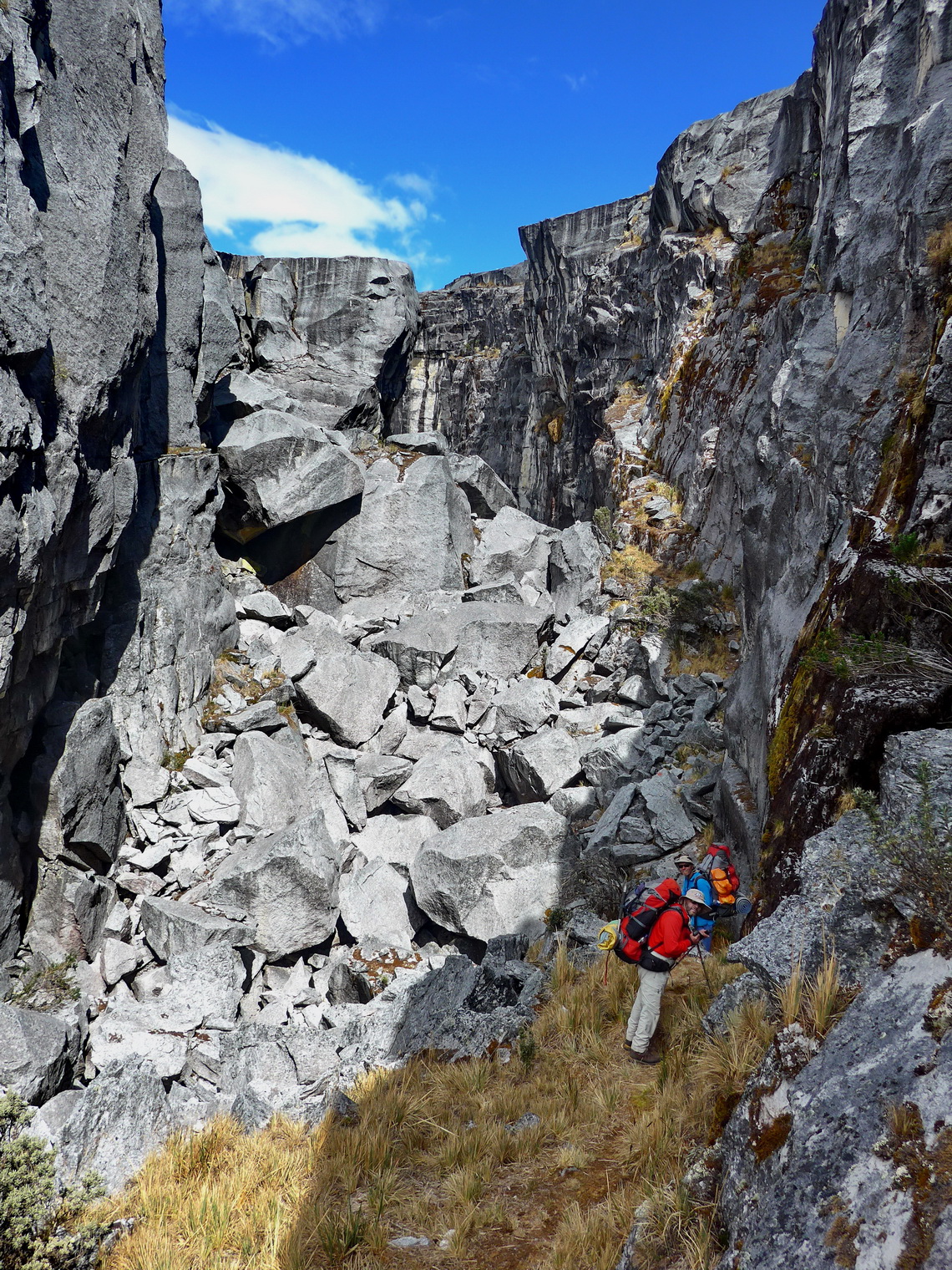 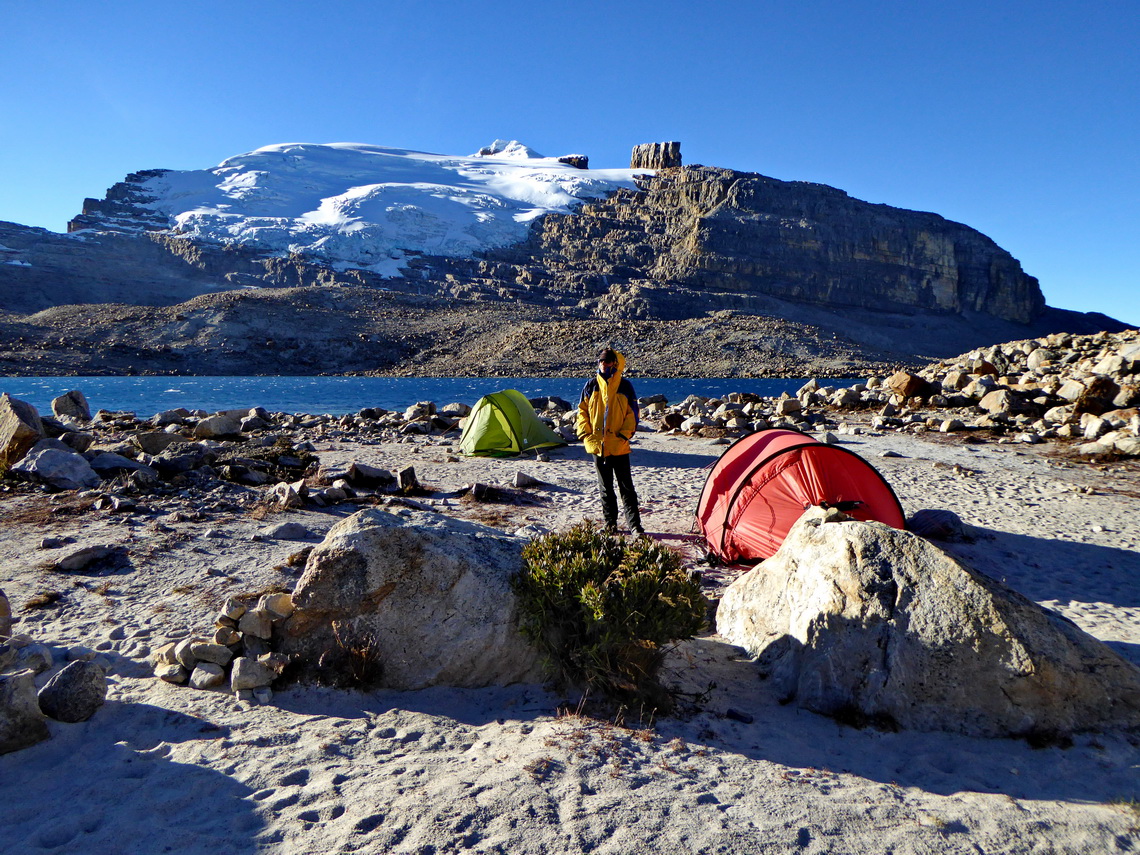 In the next morning we wanted to return to Cabaña Guican because we had ordered a taxi for the following morning to drive us the northern part of the Sierra Nevada del Cocuy. Unfortunately Tommy got trouble with his feet after few minutes and he could barely walk. Alfred placed his backpack in the cave Cueva del Hombre and continued the way down to the next farm Hacienda La Esperanza, which is also accessible by car. Marion waited in the cave for his return and built up our tent. In the cave is a ranger station but it was deserted at this time. Tommy walked very slowly downwards without any luggage.

Close to Hacienda La Esperanza 3 people with white coats were rushing up. They asked Alfred about a foreigner who has trouble with his feet. Obviously they were searching for Tommy. It turned out that the rangers had returned to the cave, had interviewed Marion and had ordered a rescue team for Tommy. Alfred was warmly welcomed on the farm. They called the agency and canceled our taxi for the next day. They prepared in a hurry some eggs because Alfred was very hungry and it was already late. Half an hour he left he met Tommy with the rescue team, which led him to the farm. It was very dark when he came back to Marion. Both returned to the farm at lunch time of the next day and we ordered a taxi back to our car. 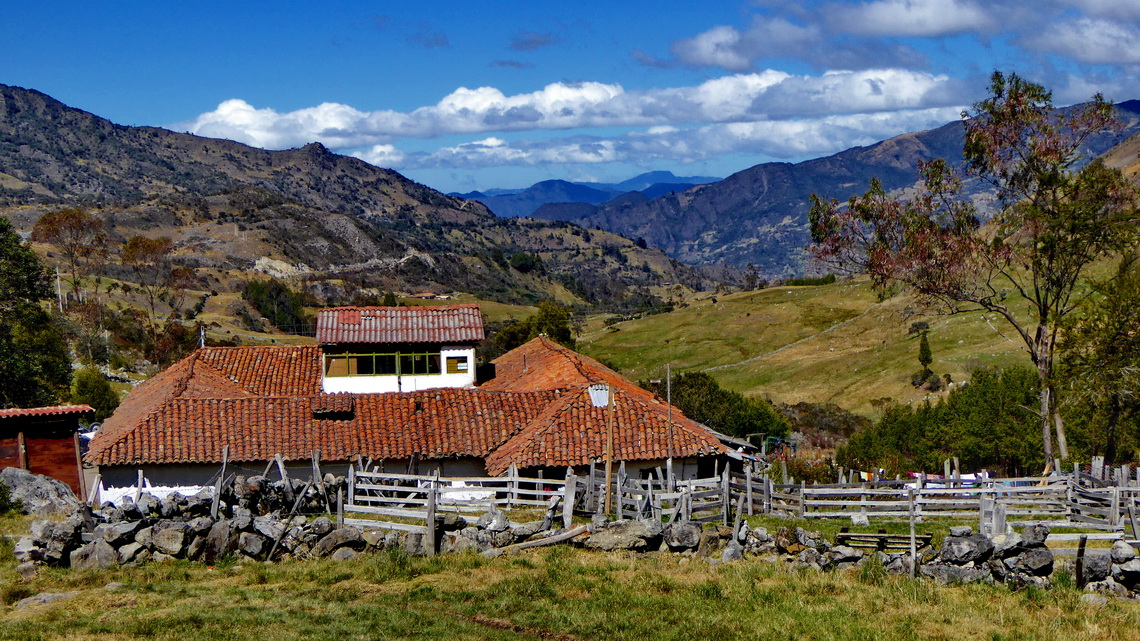 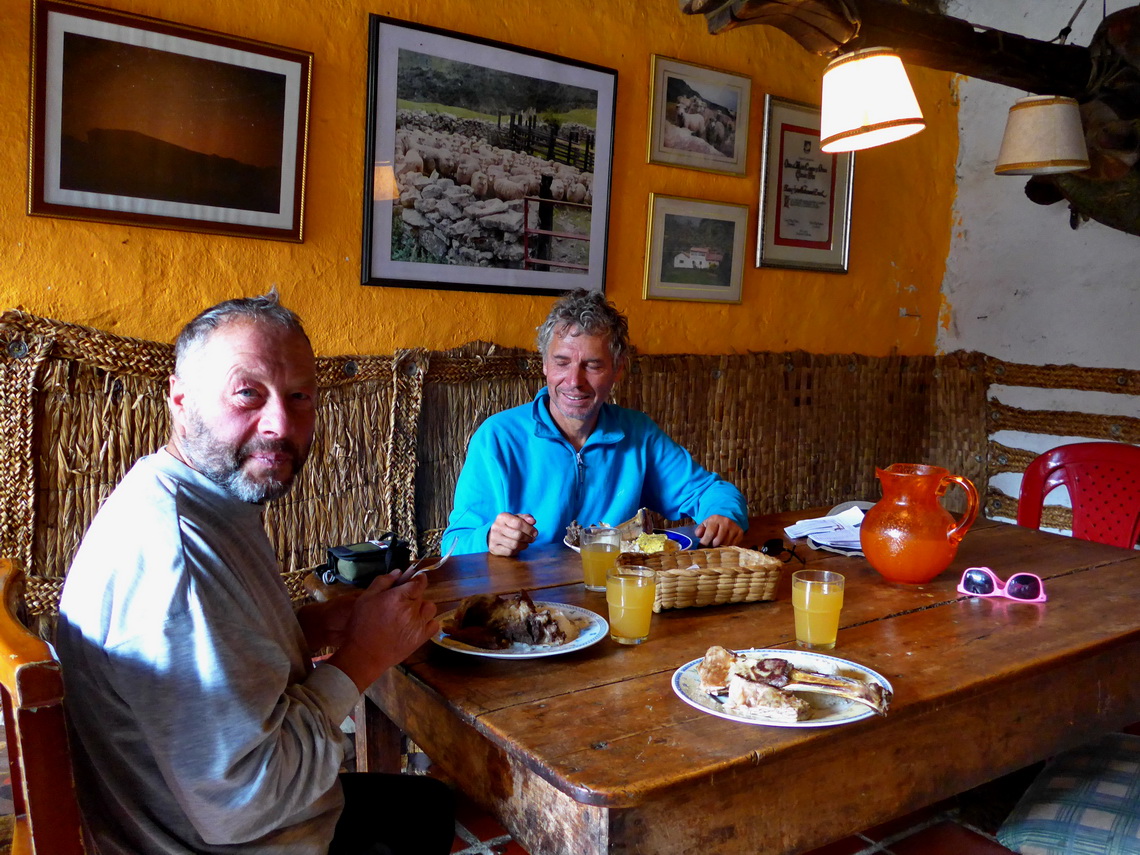 We took the direct road from Capitanejo to Bucamaranga, which was partially in awful conditions. Half the way of the 110 kilometers it became dark and we found a sleeping place in a school close to the village San Andrés. Some people were just leaving, there had been a big party. There was a little shop where we ordered some beer. A beautiful girl chatted with us in English and Spanish. Later their parents joint us and suddenly we got a tasty meal for free. It was a long and nice evening, we had a lot of fun - Thank you so much Esperanza, Tathiana and Tomas. 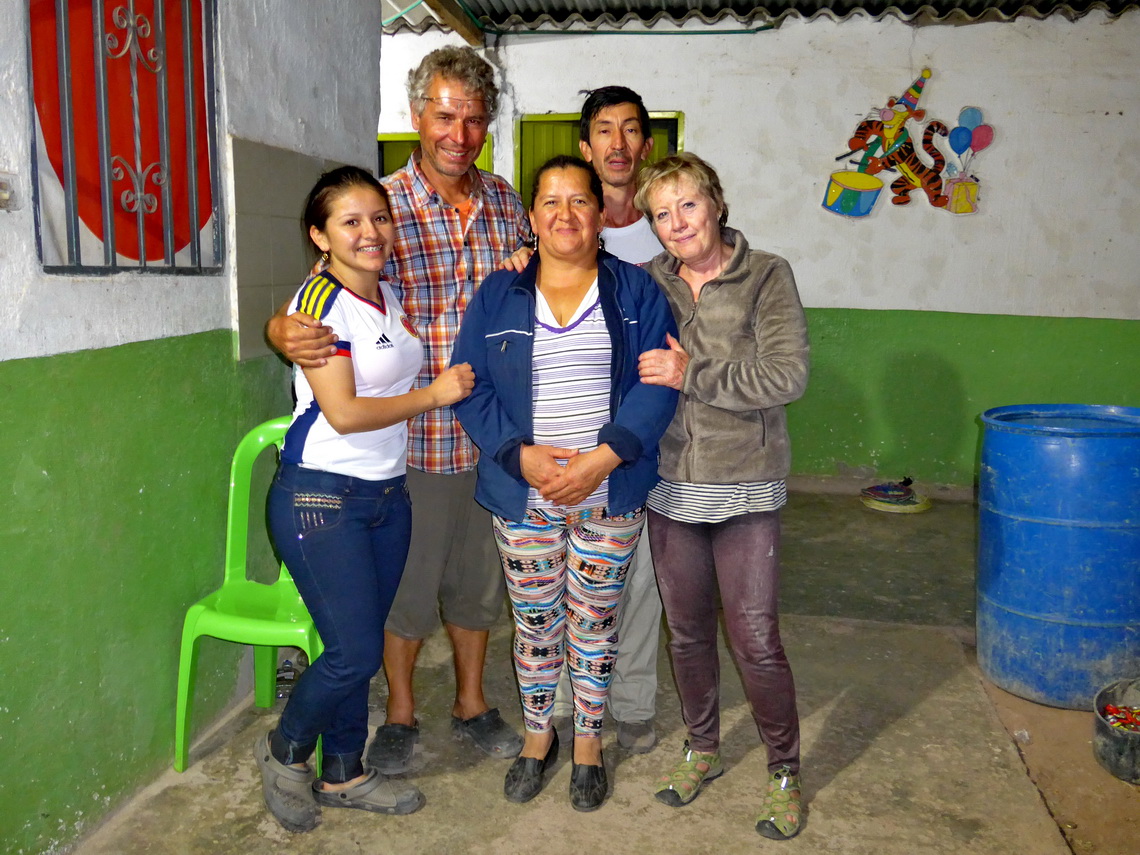 Still the road was weird when we continued to Bucamaranga. 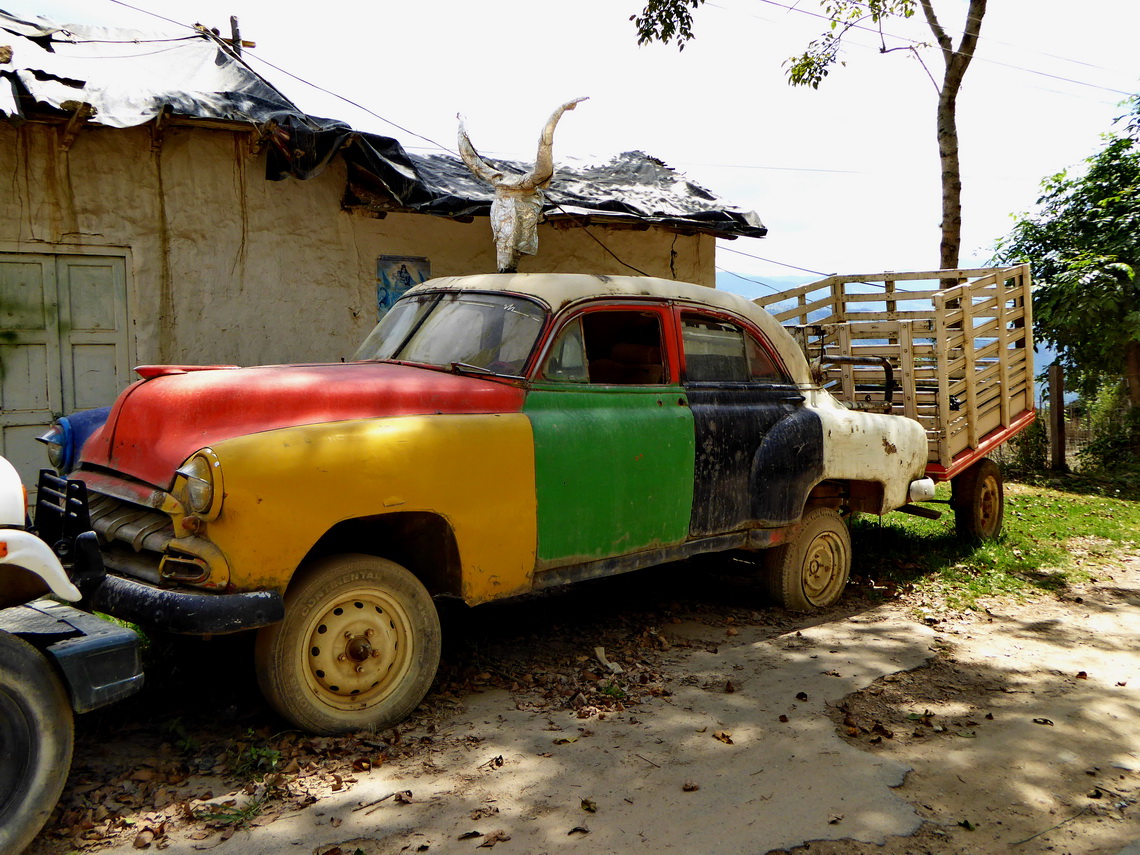 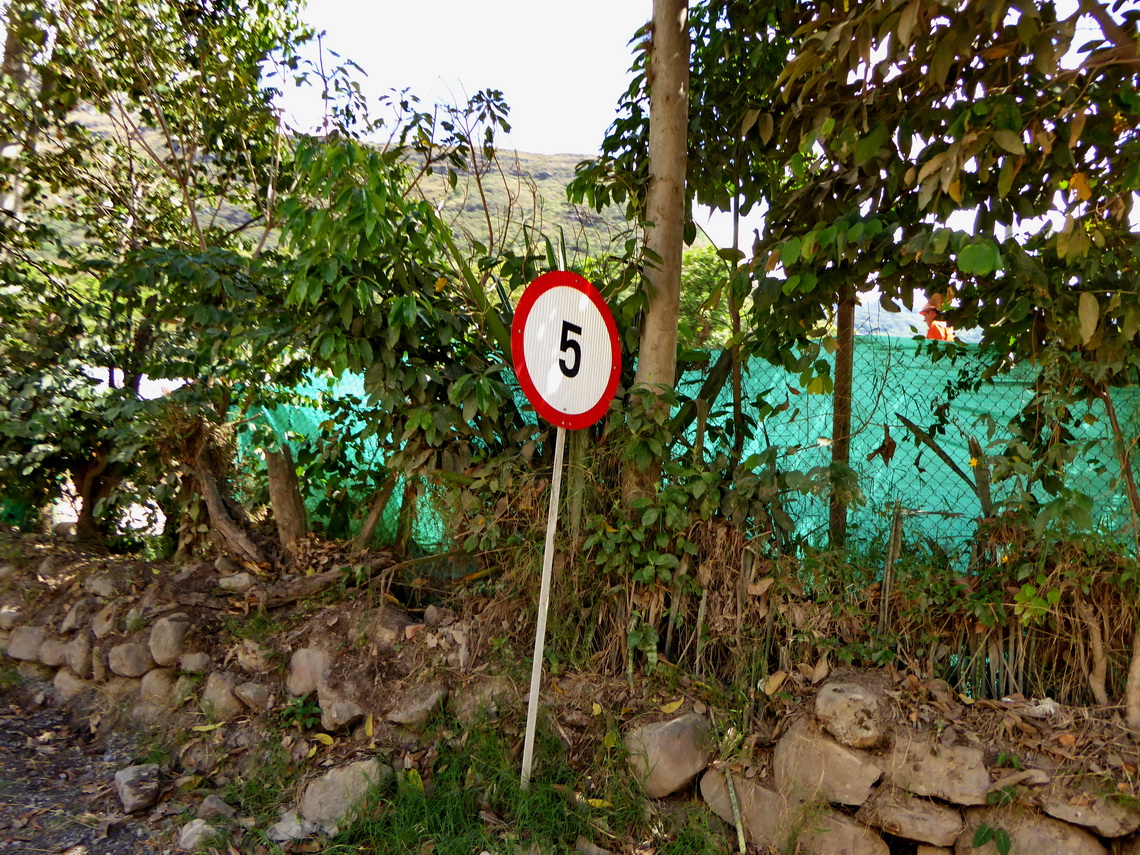 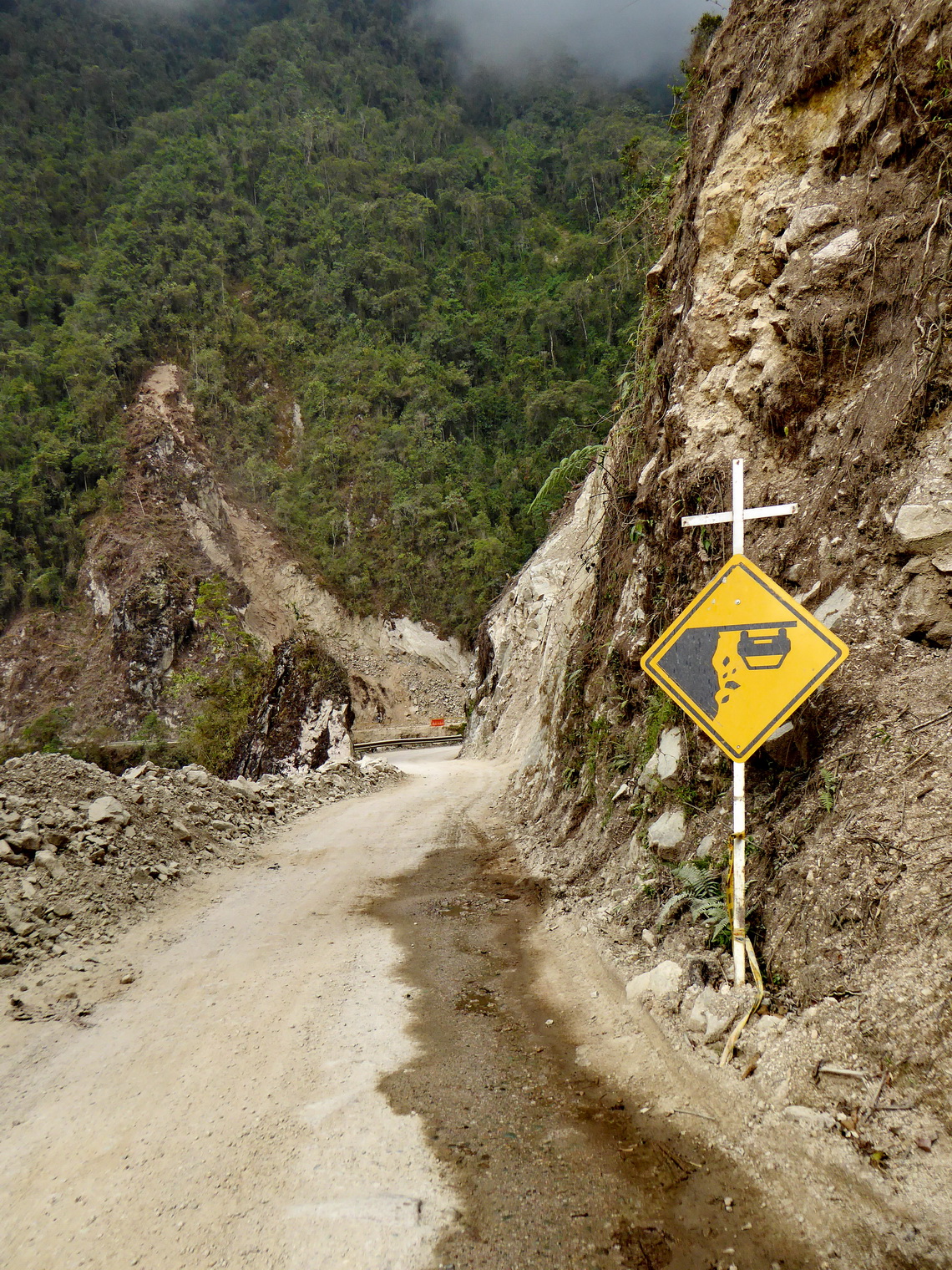 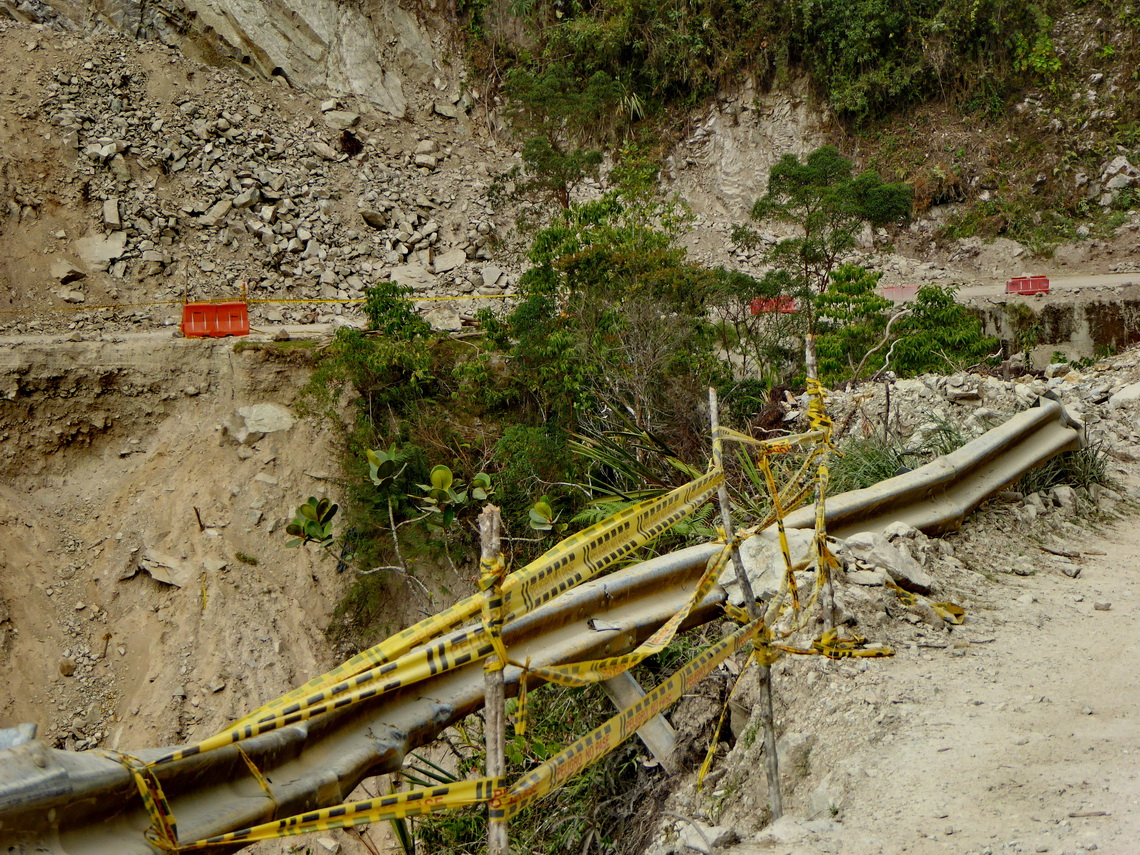 When we arrived on the main street 45A between Bogotá and Bucamaranga we turned left and headed few kilometers into the Cañon del Chicamocha. There is a good sleeping place on the parking lot for the cable car (GPS coordinates: N6° 47.360' W73° 00.251'). There we met Tim from Germany, again it was a long evening with some beer. He gave us some valuable information, specially about the new ferry between Colombia and Panamá - Thank you so much Tim.