Paraguay is one of the smaller and less populated countries in South America located between Bolivia, Brazil and Argentina without sea coast. Small means that it is a little bit bigger than Germany. Less populated means fewer inhabitants than Austria or Switzerland. It is divided by the river Paraguay into two major parts: The western Chaco, which is a flat, hot and arid lowland with very few people and the eastern green highlands with 90% of Paraguay's population. Paraguay was the first state in South America with two official languages: Spanish and Guarani of the indigenous people (also Guarani).

Asuncion is the capital of Paraguay on the huge river Rio Paraguay. It is also the economical center and with more than 1 million inhabitants the biggest city in Paraguay. The second one, Ciudad del Este, is located in the three border area between Argentina, Brazil and Paraguay. It is the boom town due to reduced taxes with many, many shops of all kinds like computers or dresses.

We crossed the Southeast of Paraguay, where some beautiful sanctuaries are situated. Our first destination was Asuncion, which is just 40km away from the Argentine border.

Asuncion has two faces: One the one hand very western with large shopping malls, modern multi-storey building and international restaurants. Also some colonial buildings are good restored, the governmental edifices are marvelous. 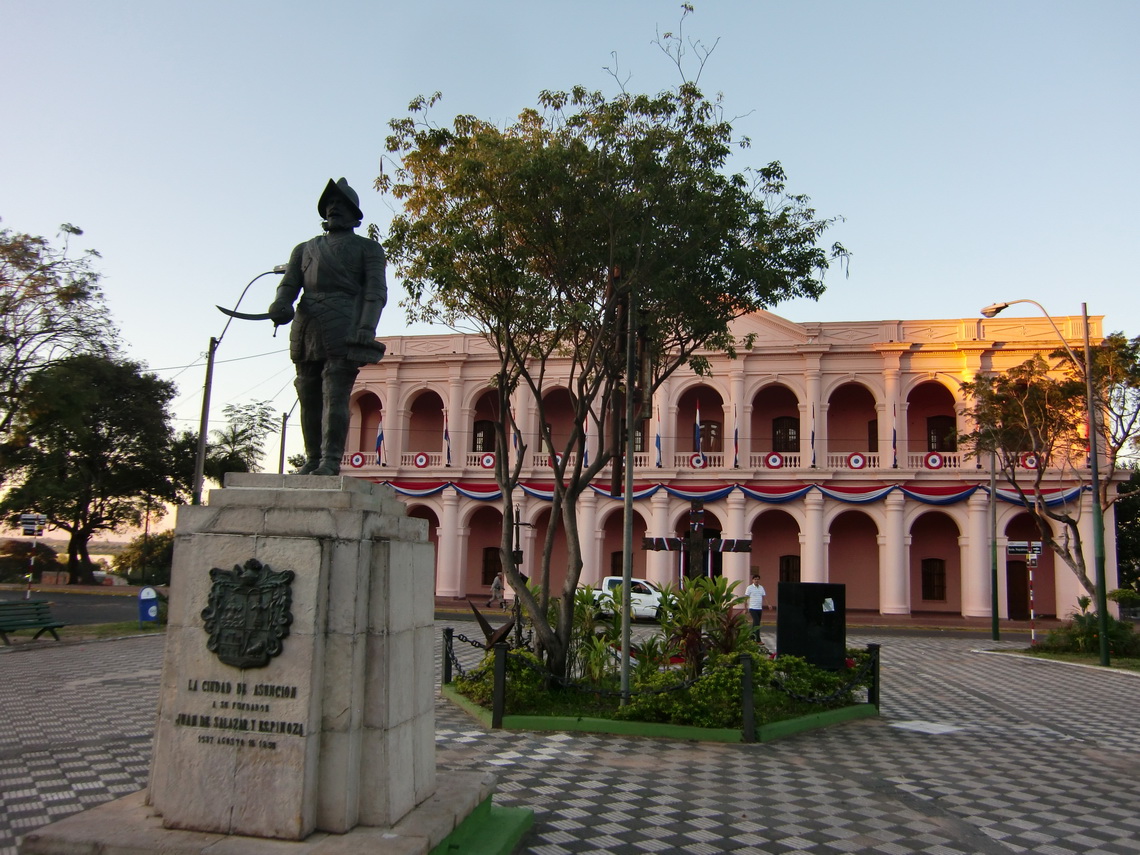 On the other hand it has dirty and miserable slums directly behind the governmental area. 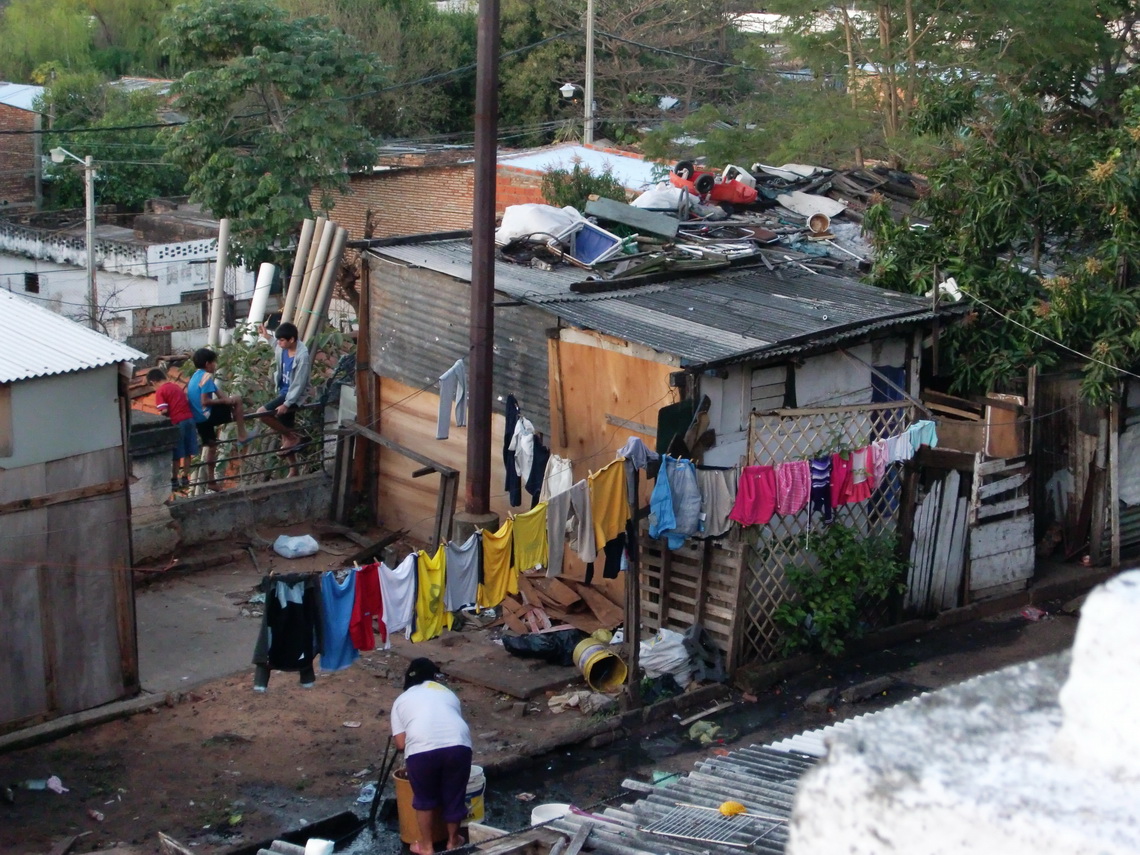 It was Saturday afternoon when we arrived in Asuncion. Everybody in the city was excited, because Paraguay was in the final game of the 2011 Copa de America, the American football championship. Tomorrow is the final game against Uruguay! Brazil and Argentina were out already in the quarterfinal. Many people wore the red white colored shirts of their football team and a lot of shops and street hawkers offered the dresses. Nearly every building and car showed the blue-white-red flag of Paraguay. 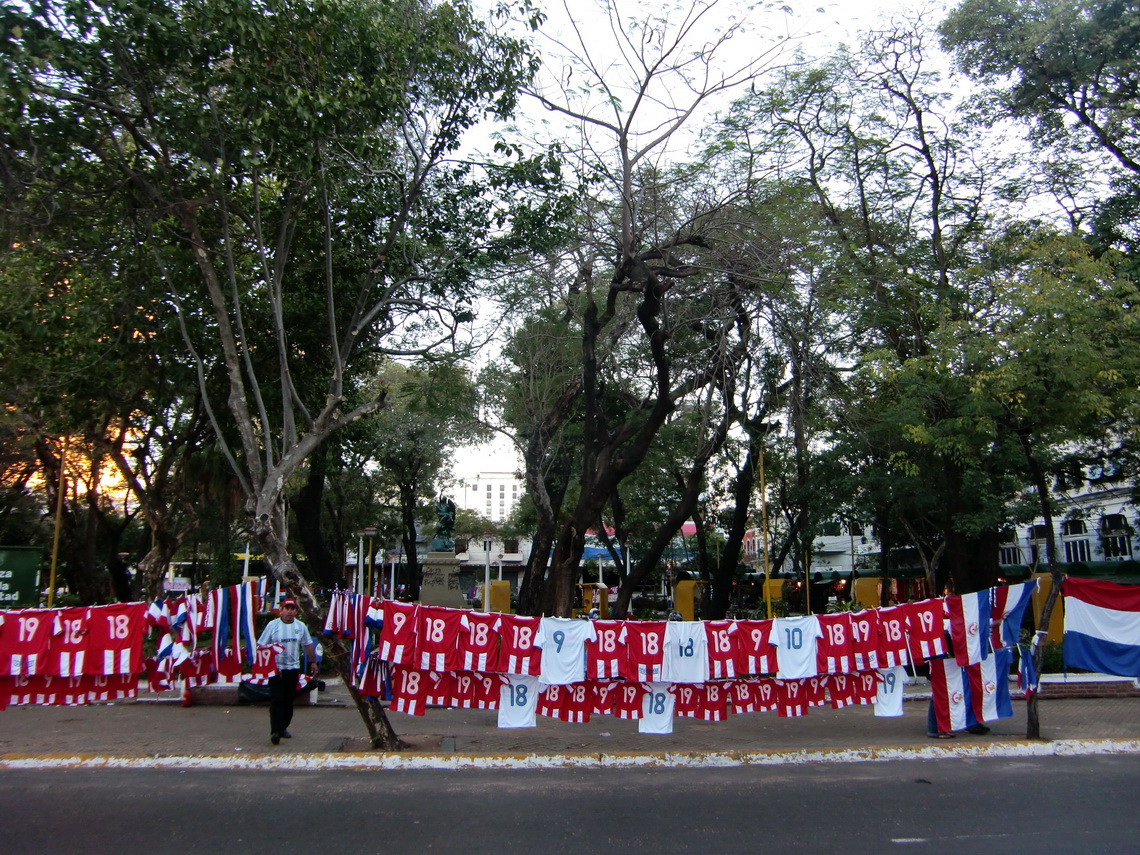 In the night we stayed in Cathy's garden in San Bernadino on the Ypacarai Lake because all camping places were closed - Thanks Cathy.

Paraguay lost the final football game of the Copa Americana; thus there was no big party on Sunday evening. But everybody was proud because Paraguay had beaten Brazil, and Paraguay was number two in America!

The more East we came the landscape became German like: Cows on green grassy meadows, hills, forests and nice villages and houses. Some of them looked a little bit ancient, like in Germany 100 years ago. A lot of German people are living in Paraguay; the third language is German after Spanish and Guarani! 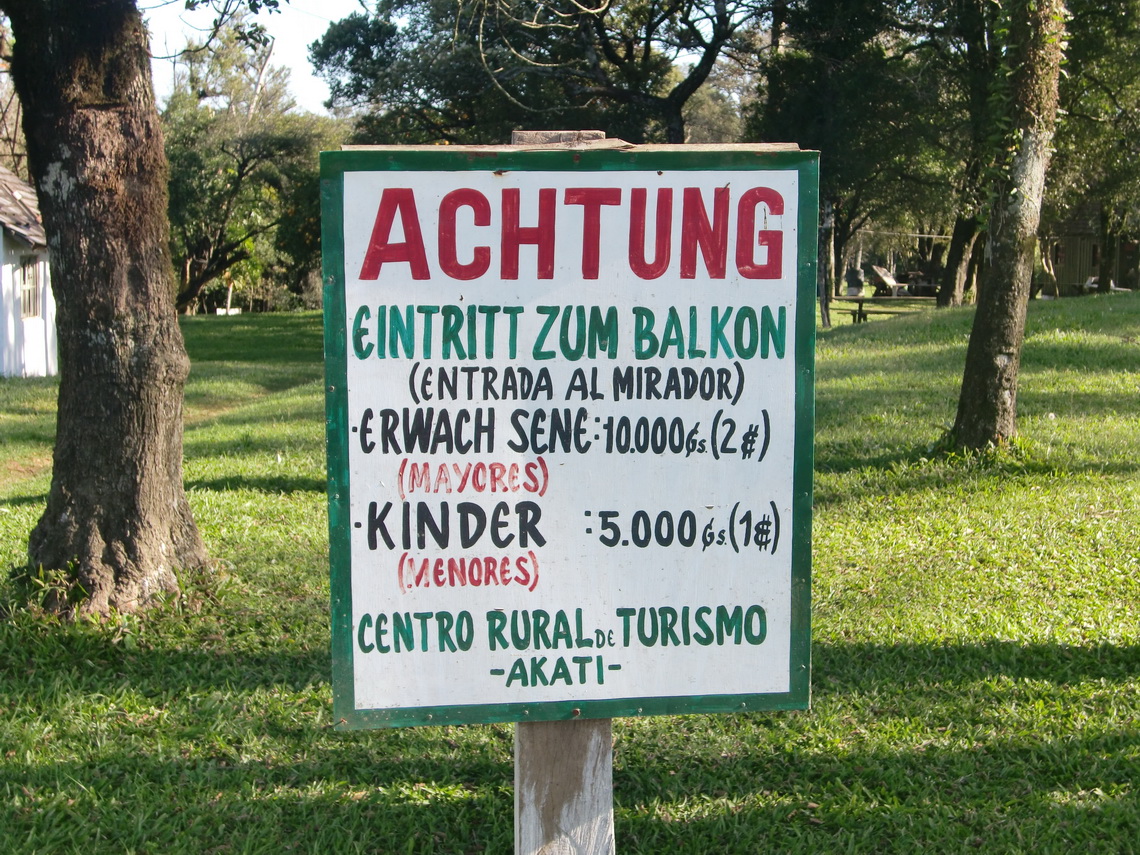 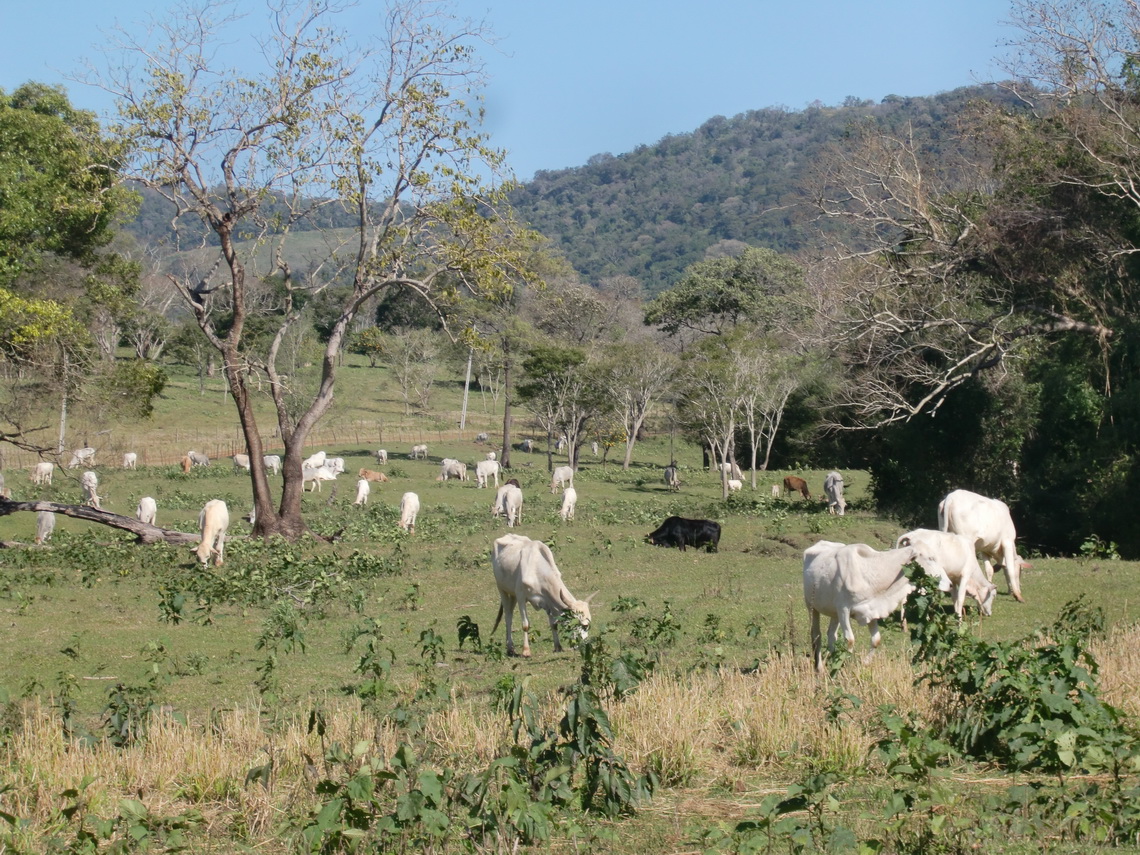 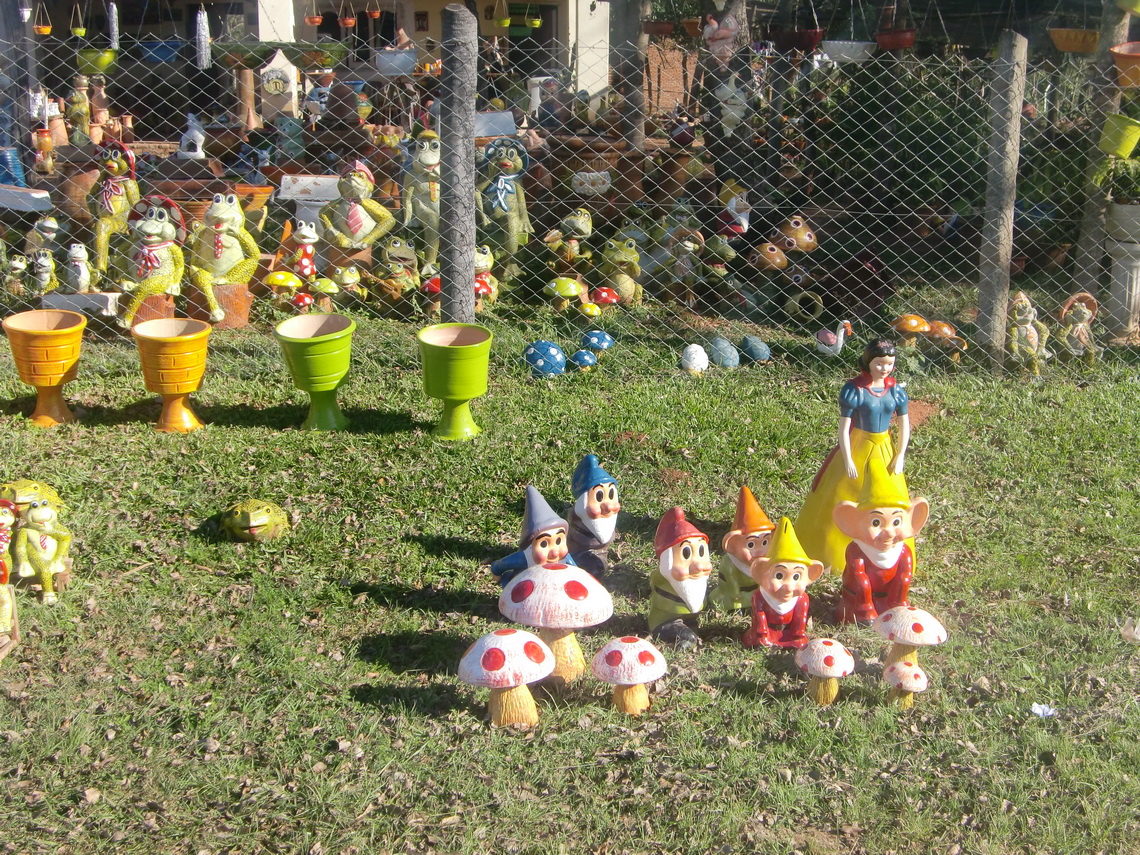 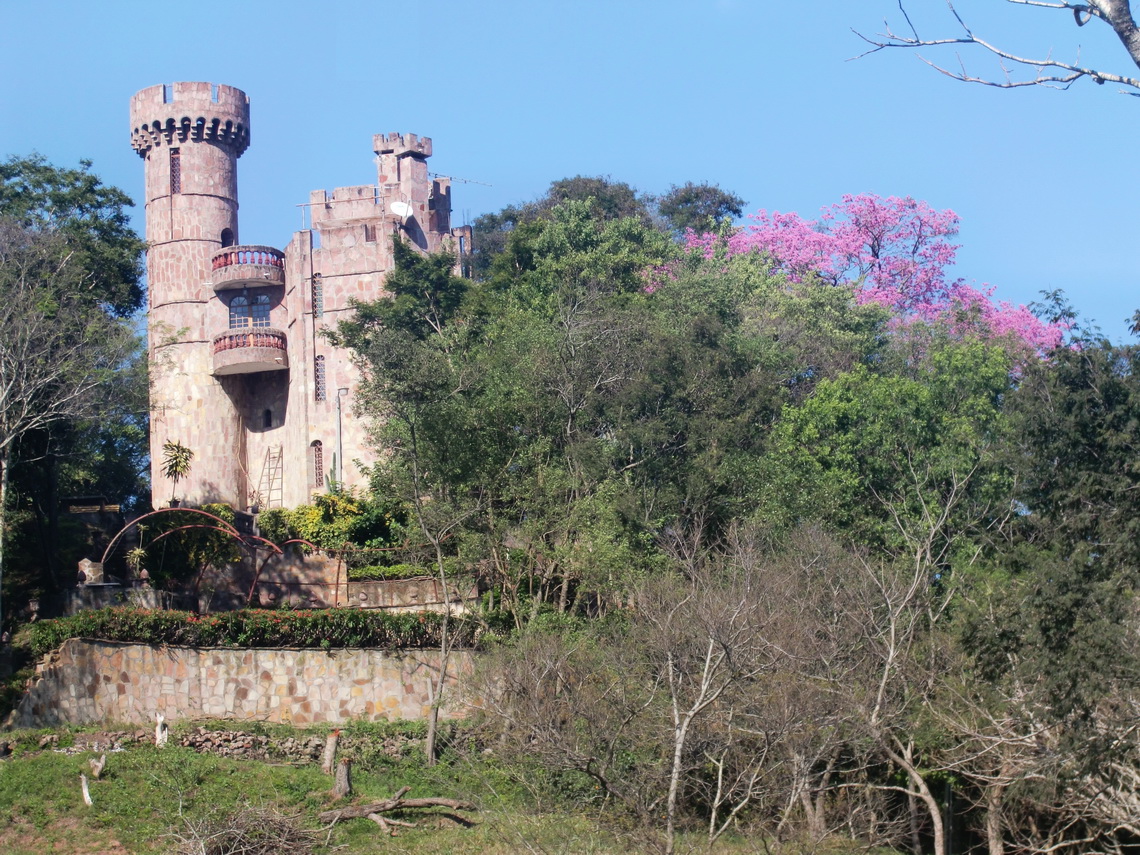 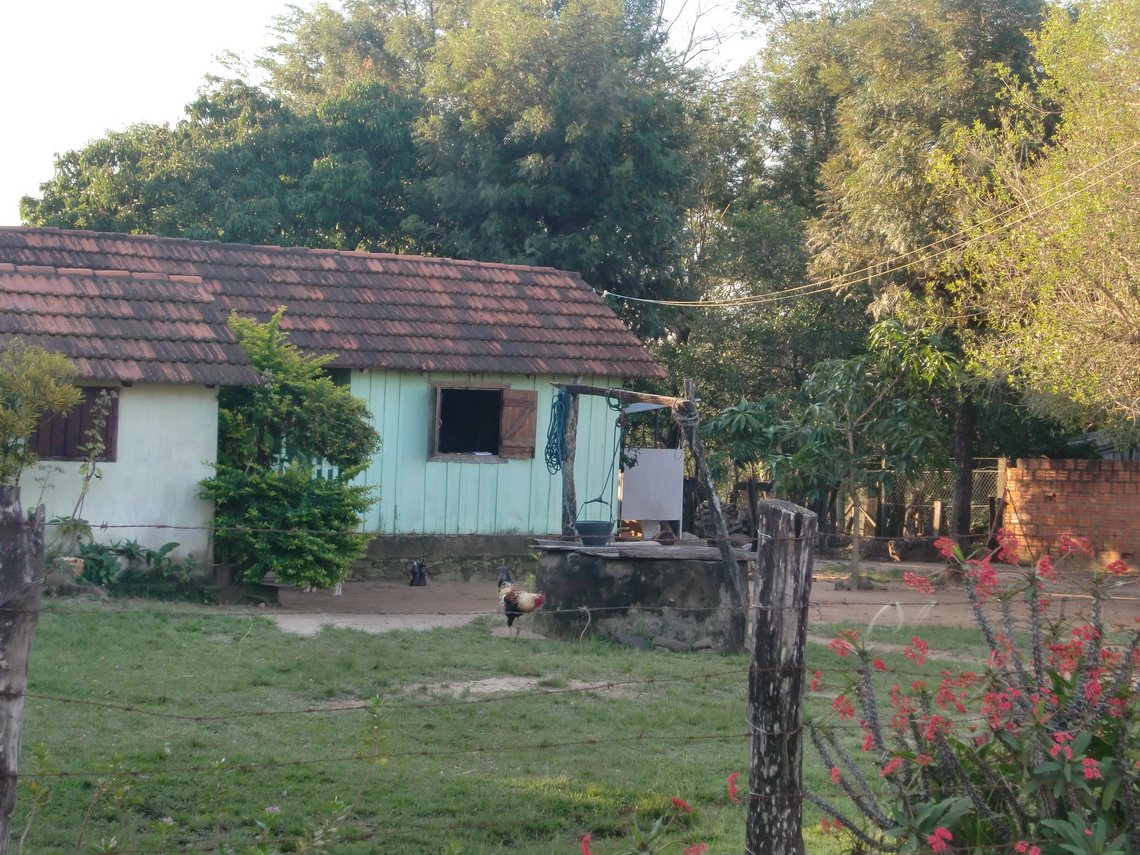 Only some animals, cars and the temperatures were a little bit different to Germany: more than 25°C in the darkest winter and always sunny. 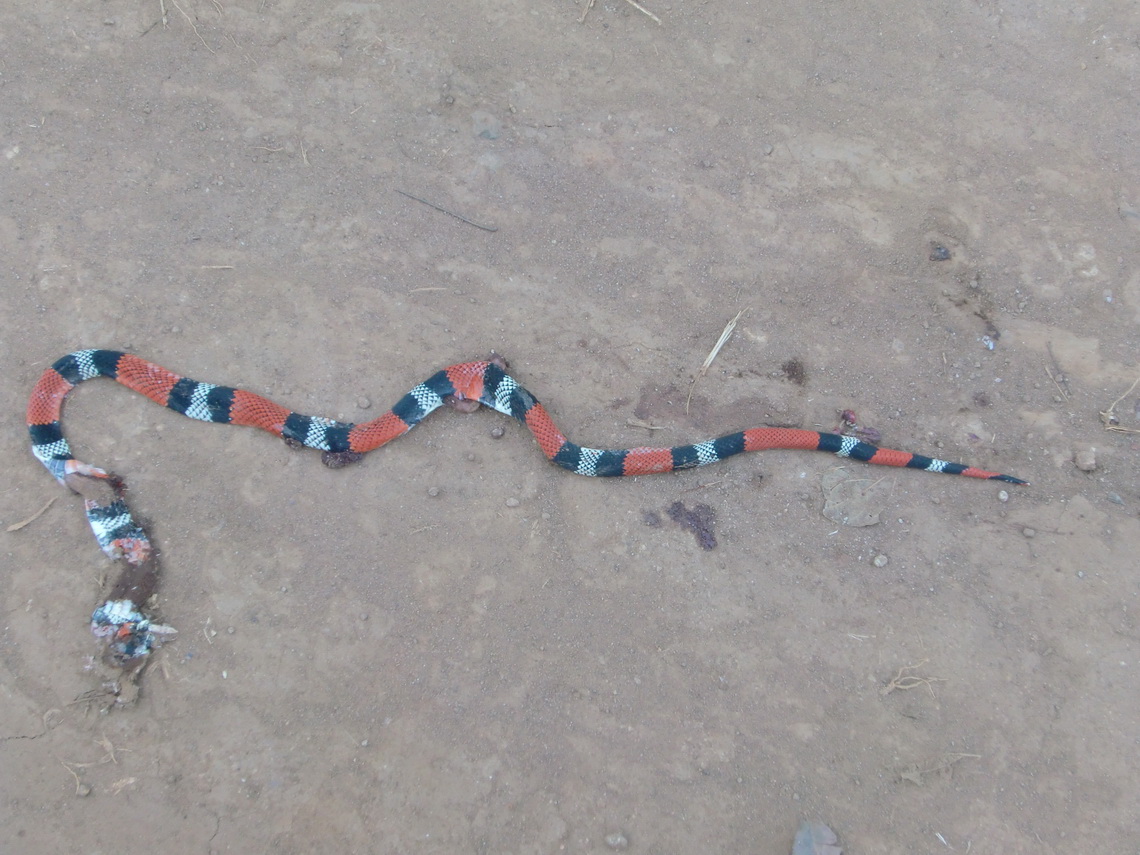 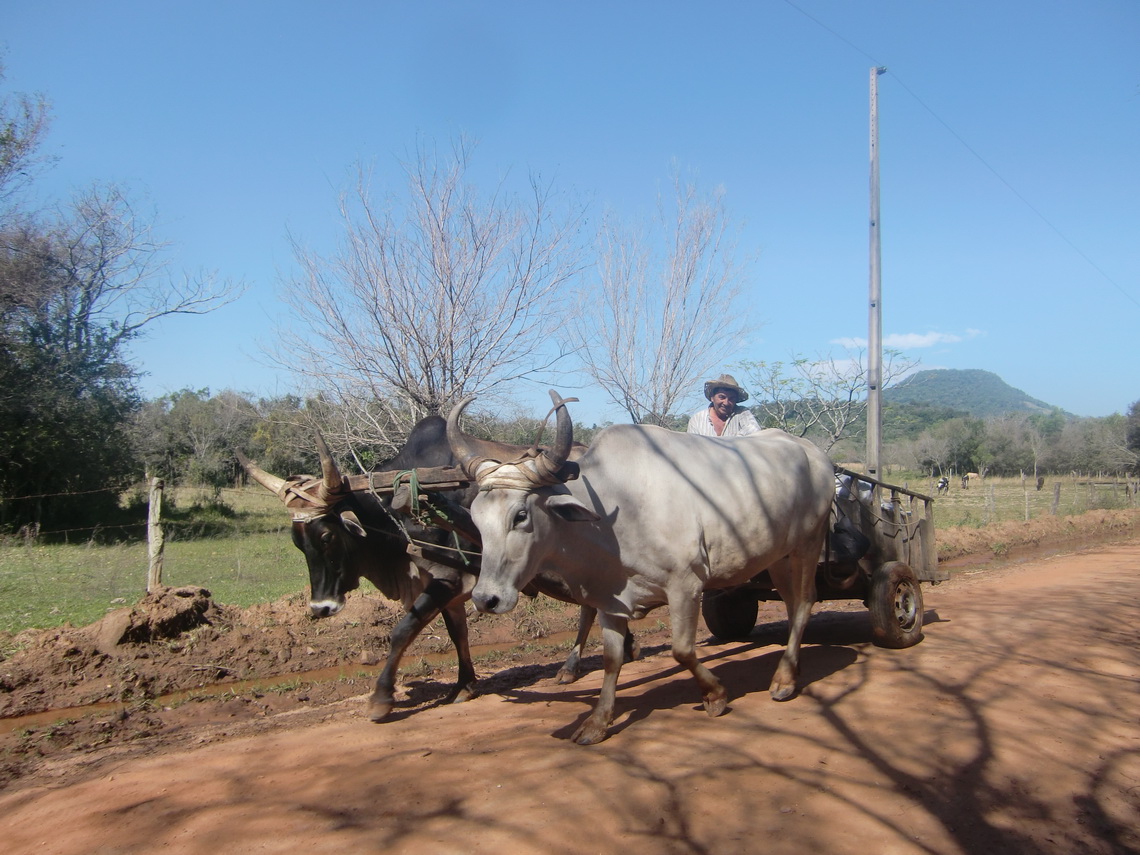 We found the beautiful and pleasant campground  EL Indio (www.el-indio.de - GPS coordinates S25 42.122 W56 15.961) in Colonia Independencia, driven by Ingo from Germany. Ingo gave us very goods tips about the near sanctuary Yvytyruzu - Thanks a lot Ingo.

We bicycled the next day in this part to the summit of Cerro Acati, approximately 600 meters high - a nice challenging mountain bike tour for the whole day. 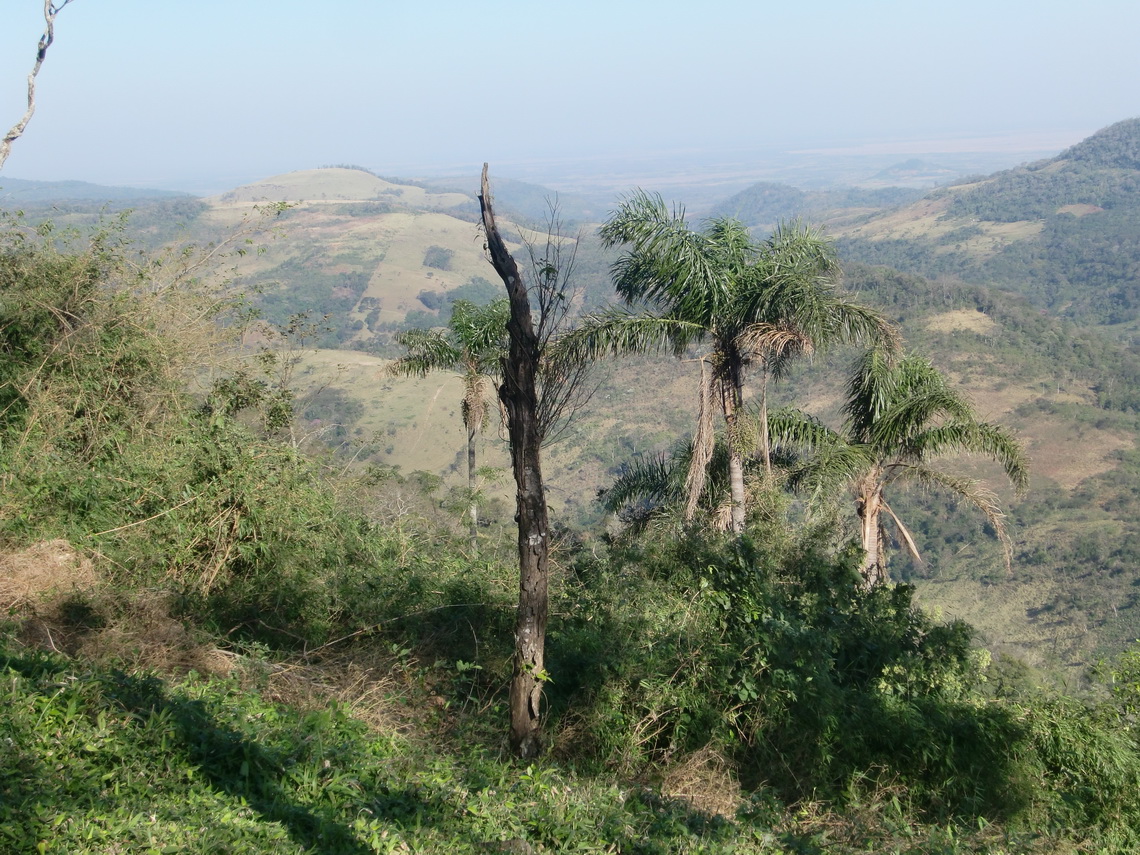 After three days we continued to the Tati Yupi sanctuary, which is close to Ciudad del Este and the Brazilian border on the artificial Lake Itaipu. This park is managed by the Itaipu company, which had built the largest hydroelectric power plant on earth on the Parana River including the dam of the Itaipu Lake. It is a  two nation project with Brazil and it provides electrical current more or less for Paraguay and South Brazil. More down the Parana River becomes the Rio de la Plata, the second biggest one after Amazon in South America.

The entrance to Tati Yupi including all services is free of charge but you have to get a permit at the Centro Ambiental Itaipu Binacional, which is located between Ciudad del Este and Hernandarias (GPS coordinates: S 25°26.675' W 054°37.917'). Free services are the campground limited to two nights (including hot showers and electrical current in the evening), guided tours with bikes, tractors or horse carriages. 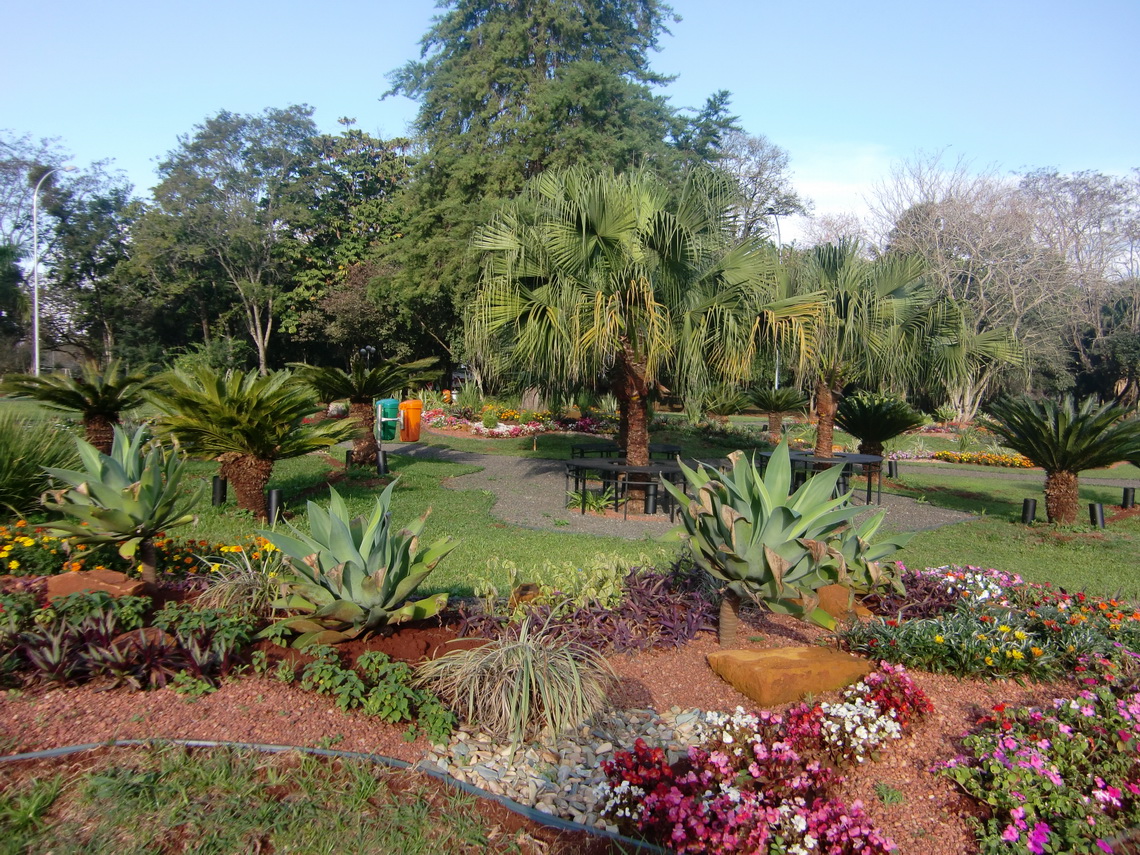 There is also a free zoo and a museum in the Centro Ambiental Itaipu Binacional. The zoo shows many local animals like Pumas or Parrots, but the cages are relatively small and some animals looked miserable. The museum is very interesting and shows the history of the Guarani people and Paraguay. Its equipment is state of the art. 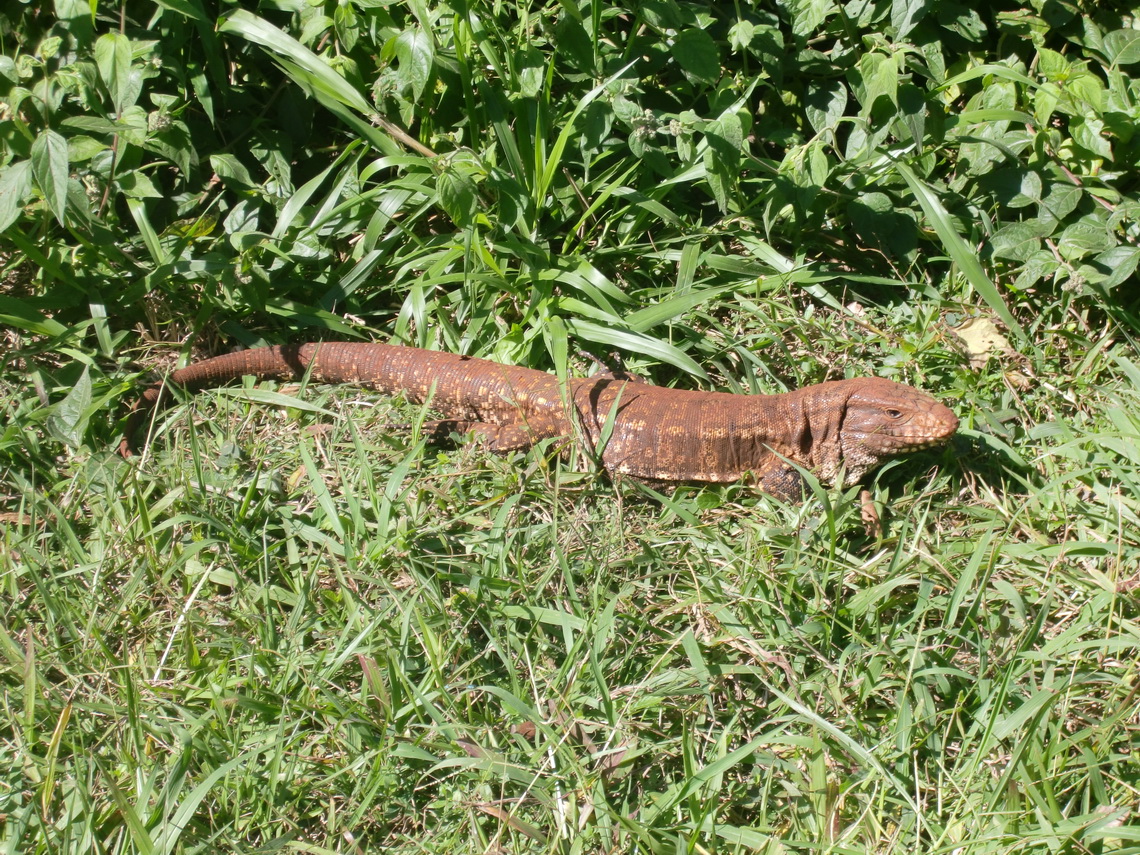 The second day many young people came with buses and they used the services as we did like the bike tour and the horse carriage trip. 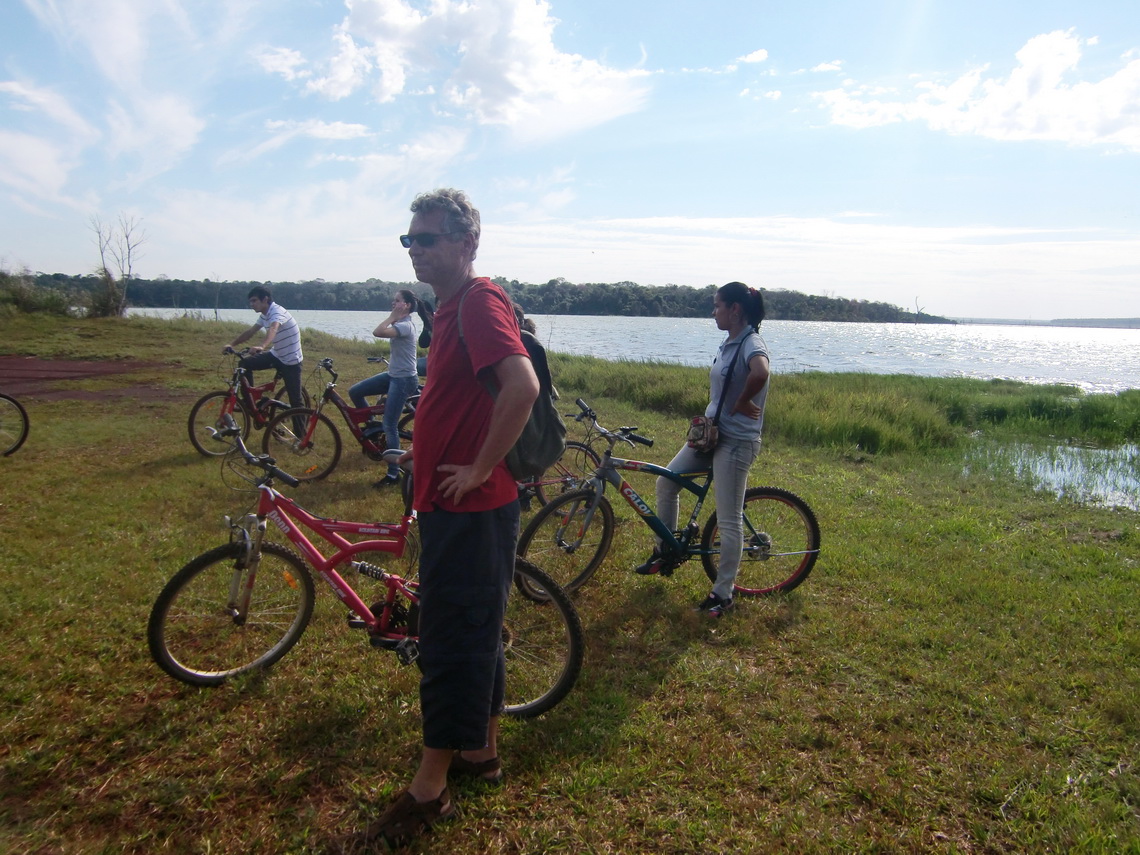 There was a strange but international sign in this park 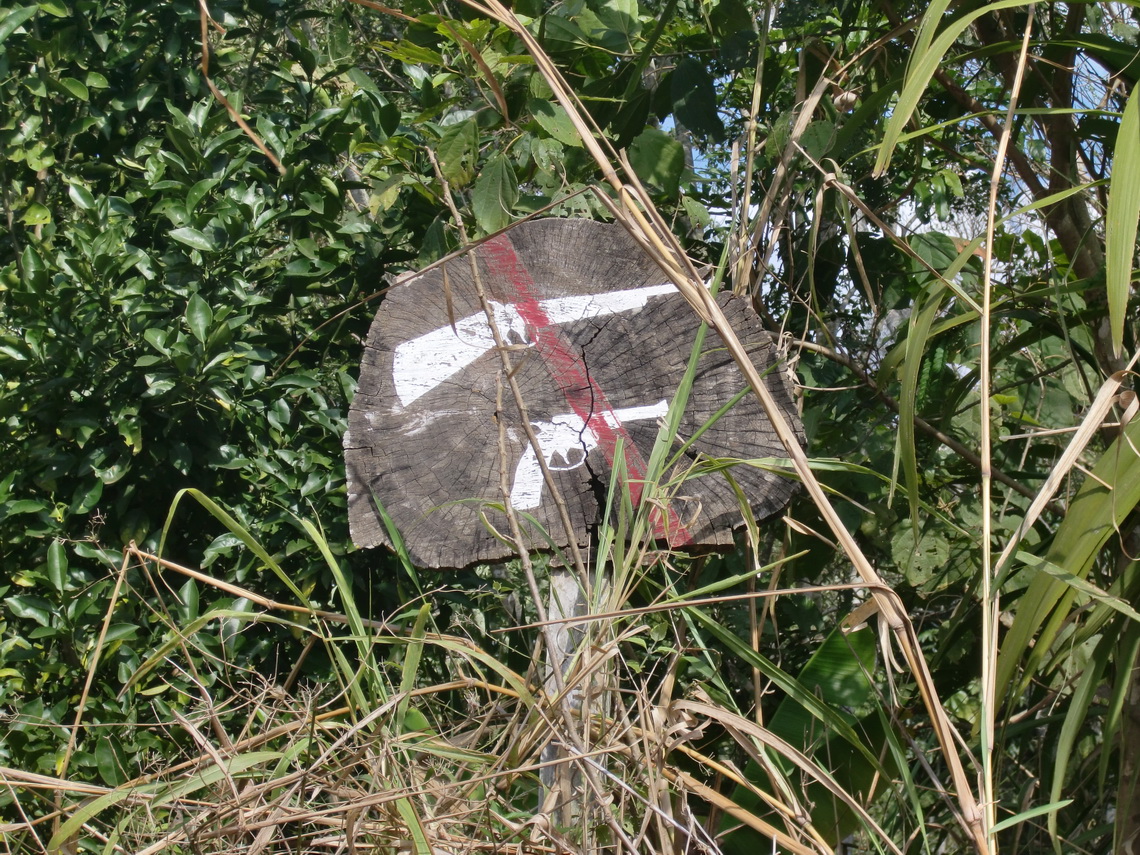 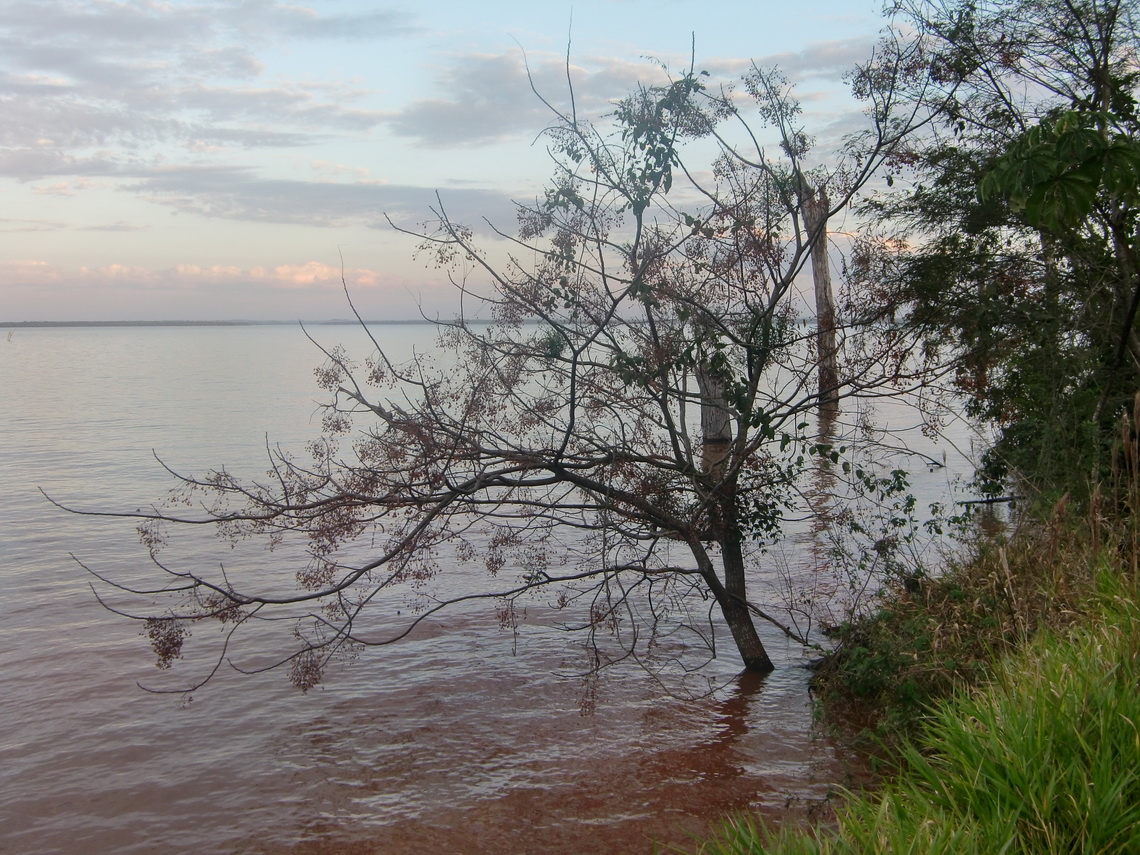 Our last day in Paraguay on this trip we spent in Ciudad del Este with its uncountable duty free shops together with thousands of people. The prices are low, especially for electronics but the goods are not the newest ones. But the parking fees in the narrow inner city are horrible: We paid approximately 30 bucks for few hours - Mafia!